Before Cranes, Ancient Greeks May Have Used This Ingenious Lifting Machine To Move Heavy Stones

Cranes first appeared in ancient Greece over 2,500 years ago, but new research suggests a primitive lifting machine — a kind of forerunner to the crane — was in use around 150 years earlier.

The ancient Greeks are renowned for their monumental stone architecture, which they managed to build without the aid of modern equipment. That said, the ancient Greeks did make use of the crane, which may have first appeared in the late sixth century BCE. Earlier, the Greeks were thought to have lifted heavy stone blocks using ramps made from earth or mudbrick, similar to what the ancient Egyptians and Assyrians had done centuries before.

New research published in the Annual of the British School at Athens found that the builders of the first stone temples of Greek history, including the temples of Isthmia and Corinth, employed a primitive lifting machine as early as the mid-seventh century BCE.

As the new paper argues, this early lifting machine can be seen as an important precursor to the crane, and it was capable of lifting ashlar blocks weighing over 200 to 400 kilograms. 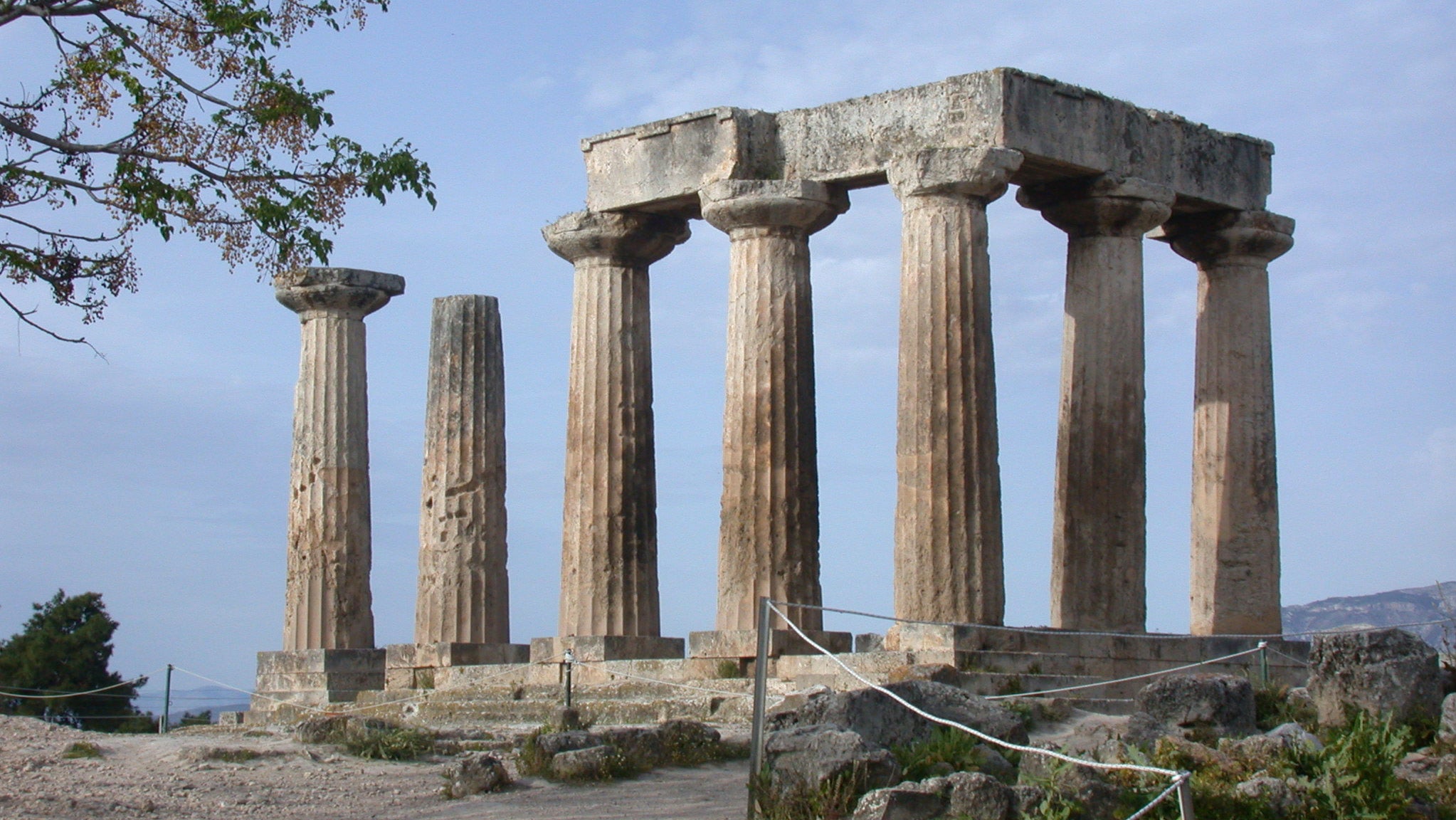 The lone author of the new study, Alessandro Pierattini from the University of Notre Dame, claims this lifting machine was originally invented by the Corinthians, who used the device to build ships and for lowering heavy sarcophagi into narrow, deep pits. Technically speaking, this lifting machine was not a crane, as it did not use winches or hoists. Instead, the Greek builders redirected force by using a rope passed over a frame.

“This kind of masonry represents a crucial step in the development of Greek monumental stone architecture, marking a departure both from mudbrick construction, which had been the norm for most Greek buildings, and from previous experiments with stone construction,” wrote Pierattini in the paper.

Key evidence for this claim comes from grooves etched onto the bottom of stones used to construct the Corinth and Isthmia temples. Historians of antiquity are familiar with these grooves, but it’s not known if the grooves were used for lifting the blocks during the building process, or for moving them around quarries.

For the study, Pierattini studied stone blocks used in early Greek temples, while also engaging in some hands-on experimental archaeology.

“My paper reexamines the blocks from the mid-seventh century temples at Corinth and Isthmia and their peculiar cuttings — two parallel rope-grooves on their underside and turning up on one end,” Pierattini told Gizmodo.

“Scholars have proposed two alternative interpretations for these grooves: they served either for attaching the blocks to lifting machines or for moving blocks in the quarry. My reexamination concludes that the grooves served for lifting and testify to the first experiments with lifting architectural blocks in Greek history.”

Using actual stones and rope, Pierattini demonstrated that the grooves could have served a dual function, allowing the builders to both lift the blocks and position them tightly against their neighbours on the wall.

“With heavy stone blocks and high friction between stone surfaces, this was a highly problematic step of construction that in later times would require sets of purpose-made holes for using metal levers,” said Pierattini.

“By interpreting cuttings that had been overlooked by previous scholarship, my paper demonstrates that the builders of the early temples at Corinth and Isthmia were already using levers for the final setting of the blocks. This represents the first documented use of the lever in Greek architecture,” he told Gizmodo.

According to the new paper, the ancient Greeks were using lifting machines to build stone temples as early as the mid-seventh century BC, which is around 150 years before the introduction and spread of fully developed cranes, with their hoists and winches. The discovery is further testament to the ancient Greeks and their remarkable ingenuity.