What do you do if your cat often gets in a murdery mood and tries to bring dead, blood-dripping varmints into your house? Well, if you’re engineer Ben Hamm, you create an AI-powered cat door to lock out the furry boy when he tries to bring you a filthy meat present.

An engineer spent months gathering thousands of images of his cat, Metric, entering and leaving his house, a pretty tireless task necessary to create an AI-powered cat door that locked the furry boy out should he be in a murdery mood and try to bring in a dead animal.

Hamm, a senior product manager at Amazon, says he spent months collecting thousands of images of his cat, Metric, entering and leaving his house to create the AI cat door, which he gave a talk about the automated cat door at Ignite Seattle last month.

To create the door, Hamm says he attached an Arduino to a lock, mounted Amazon’s DeepLens camera above the cat door, and fed over 23,000 images of his cat to Amazon’s machine learning platform, SageMaker, to detect when Metric was coming in with prey. 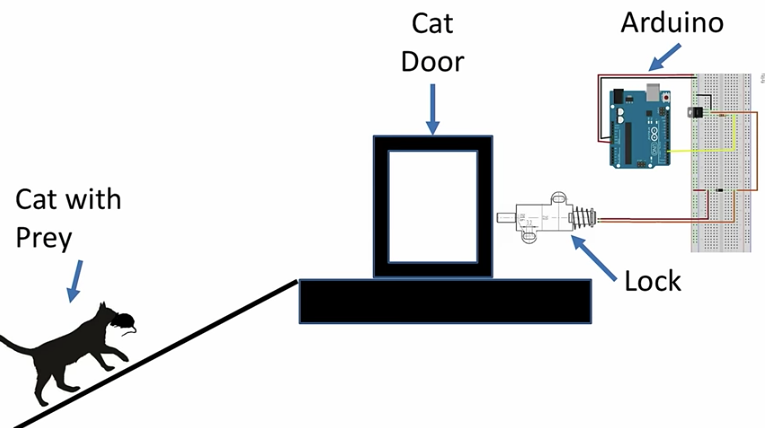 “Is the cat coming in normally or is the cat coming in to ruin my night,” Hamm said during his talk, which is effectively what the machine learning model was trained to detect. If the door detected prey, the cat door would lock for 15 minutes, send a text to Hamm, and donate money to the Audubon Society.

Because the machine learning model was only trained on images of Metric coming and going from Hamm’s home, the cat flap will only work on his cat. Creating your own version of this would require you to also collect and label tens of thousands of images of your own pet – which probably isn’t an obstacle to some of you Instagram-hungry pet owners out there.

According to Hamm, after five weeks of running the cat door, Metric “entered innocent” 180 times and was locked out six times. Of the six times he was locked out, Hamm said, he was only unfairly locked out (read: the algorithm screwed up) once.