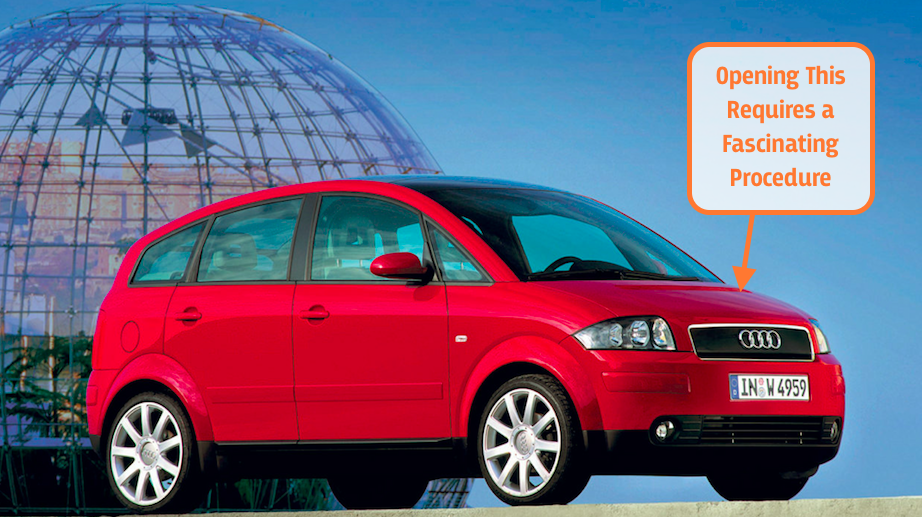 The Audi A2 is already fascinating for being the first ever high volume aluminium-bodied economy car, for its amazing aerodynamic properties and for its polarising, bubbly styling. But more than that, it’s the vehicle’s hood opening procedure that I think cements it squarely in the “wacky car” category.

I recently found myself researching Audi A2s after watching an excellent video by German car magazine Auto Motor und Sport, who wants viewers to devote 35 minutes to celebrating the wacky aluminium Audi economy car’s 20th birthday. That video is in German, but if you understand any of the language, you should definitely check it out.

But beware, it will send you down an Audi A2 rabbit hole, which is how I discovered this YouTube video by JayEmm on Cars, in which the host shows off the amazing process of opening the car’s hood.

This particular A2 is a special one, as it’s referred to as the A2 3L, with the “3L” not referring to the engine size, but rather to the fact that the vehicle should only burn 3 litres of diesel for every 100 km of travel — or about about 78 MPG. That’s an incredible figure, whether it’s just a European fuel economy rating or a real-world result.

But anyway, let’s get to the hood popping: As the host shows, pulling the release handle near the driver’s floorboard doesn’t actually pop the hood, but rather releases what the host calls a “service hatch,” which is basically just the blocked off grille (done to improve aerodynamics) hinged from the bottom.

Behind the grille is the dipstick to check oil, the windshield washer bottle and the oil fill port, the latter two of which just rotate outward to yield the removable cap.

From there, you can’t actually open the hood — you have to remove it. And to do so simply requires rotating two screws behind the grille, and then lifting the lightweight aluminium hood straight up. Re-installing the hood is as simple as placing it above the engine, and twisting the two screws behind the popped grille the other direction.

The whole thing is incredibly wacky, and I must say, I’m into it.