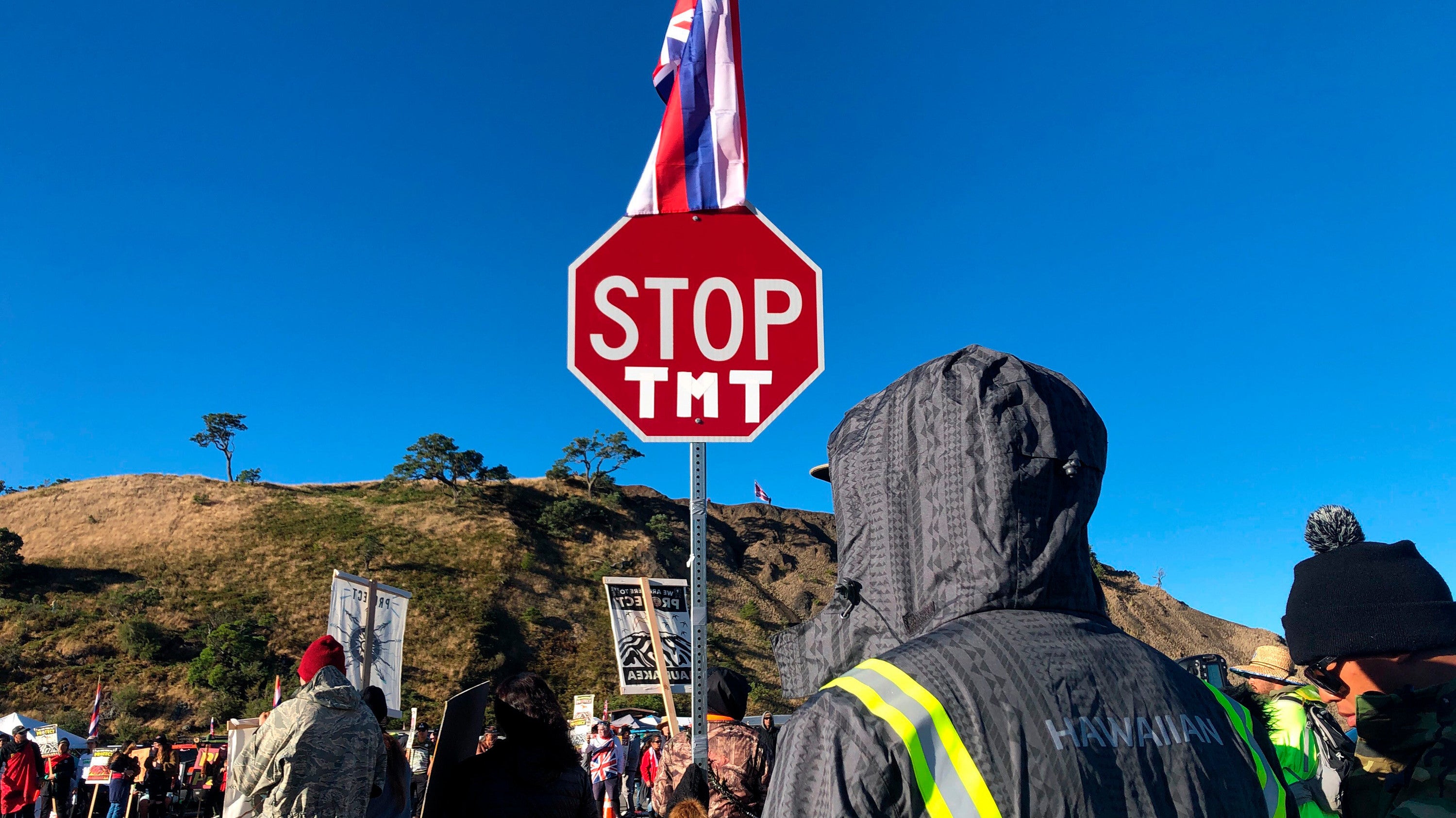 Demonstrators gather to block a road at the base of Mauna Kea in Hawaii July 15, 2019 to protest the construction of a giant telescope. (Photo: AP)

Construction preparation for what is supposed to be one of the world’s biggest and most powerful telescopes was set to begin on Tuesday in Hawaii, but opponents aren’t making it easy.

A great deal of controversy has surrounded the construction of the Thirty Meter Telescope (TMT) because of where scientists want to place it: Mauna Kea, a dormant volcano on the Big Island that many Native Hawaiians consider sacred. Opponents to the $2 billion project, who are largely Native Hawaiian, have been fighting the telescope because they use this land for prayer and ceremony. Currently, 13 telescopes sit on the mountaintop though five of them are scheduled for decommissioning by the time TMT is operational.

The construction was finally slated to start this week after drawn-out legal battles between opponents and developers. But on Tuesday, an estimated 500 people came together to prevent vehicles from accessing Mauna Kea Access Road, the only way to reach the site, reported the Honolulu Star-Advertiser.

Some blocked the road by tying themselves together, others shackled their arms together and lay on the ground. Surprisingly, no one was arrested with multiple outlets reporting that law enforcement was working closely with activists to keep the situation from escalating.

Opposition efforts continued Wednesday with an estimated 200 people coming out to protest, according to the Hawaii Department of Land and Natural Resources. The city of Honolulu deployed dozens of officers to join the law enforcement efforts as a response, according to Hawaii News Now.

The Hawaii Department of Land and Natural Resources wouldn’t comment to Gizmodo on how it planned to deal with the protestors Tuesday, but again its officers didn’t arrest anyone. That’s a major success for protestors because arrests would’ve ended their disruptive actions, allowing business to carry on as usual. In the afternoon, protestors allowed all personnel at the Mauna Kea Observatories to evacuate safely.

People also took to the streets Wednesday throughout the Hawaiian islands, including outside the State Capitol and on Maui, to peacefully protest the project.

The department wouldn’t comment on how it plans to move the project along if protestors don’t budge in a press conference it held Wednesday, reports the Honolulu Star-Advertiser. The TMT Observation Collaboratory, which includes the groups behind the project like the National Astronomical Observatories of the Chinese Academy of Sciences and the Association of Universities for Research in Astronomy, told Gizmodo in an emailed statement Wednesday, “We hope the protests remain peaceful and lawful as work begins.”

Actual construction wasn’t slated to start Tuesday. All developers had planned for Tuesday was to add concrete barriers along the roadway to ensure the safety of protestors from road vehicles, which the state did manage to do. Construction is, however, supposed to begin later this week. But opponents were clear from the beginning that they wouldn’t stand by and let it happen.

If the last few days are any indicator, they weren’t playing.