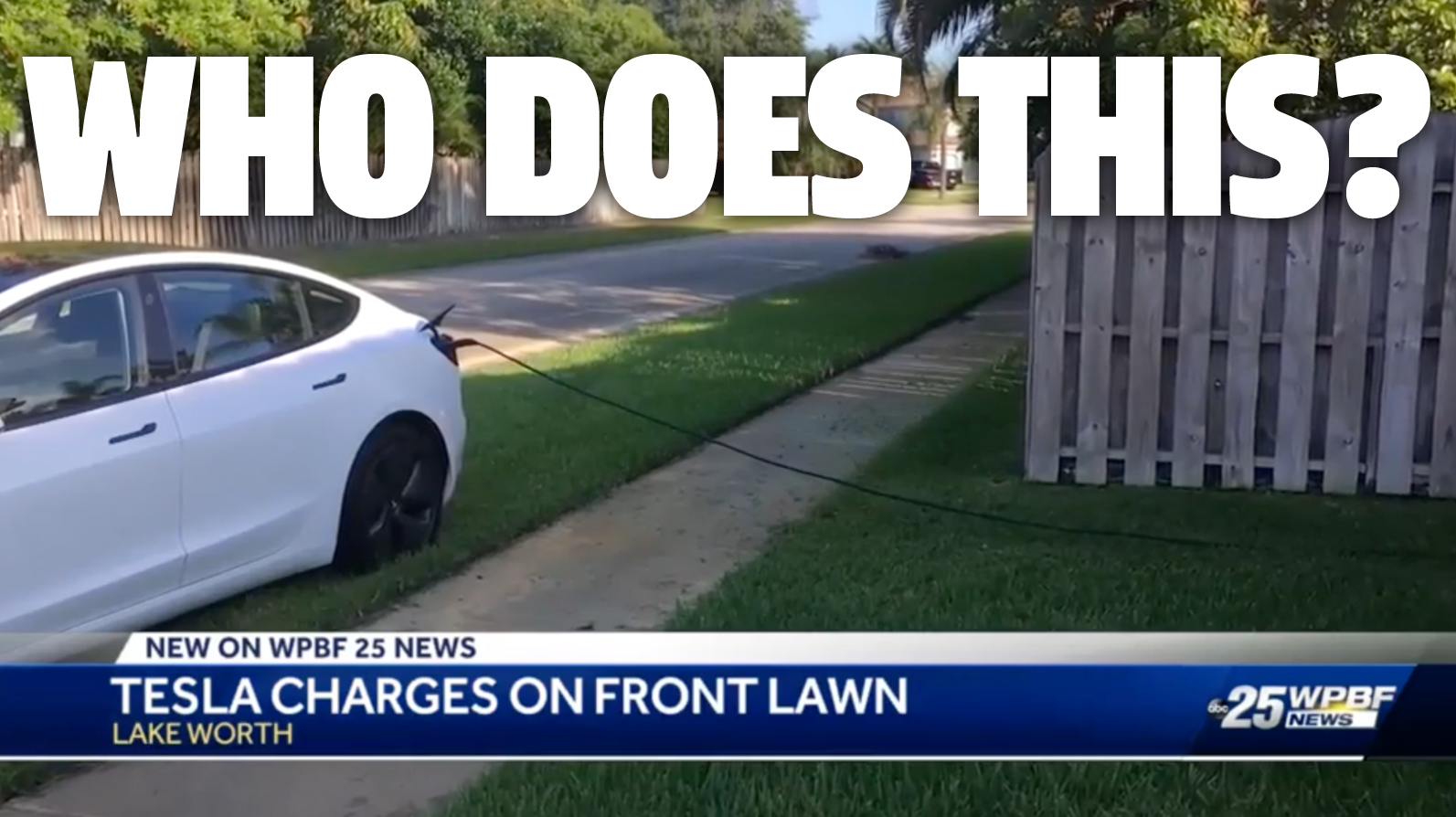 There’s sort of a stereotype of Tesla owners having this elevated sense of self-worth and entitlement since they believe that the fact that they drive a fast, luxurious electric car means they’re saving the world for the rest of us drooling simpletons. Of course, like all stereotypes, this is likely unfair and can’t possibly be true for all Tesla owners, but when you see dipshits doing things like this, you get where it comes from.


And by “this” I mean a Tesla owner parking on a stranger’s lawn to steal power from them for 12 whole hours.

As TV station WPBF reports, the stranger in question was homeowner Phil Fraumeni, who lives in a tidy house in Lake Worth, Florida. Last Friday morning Fraumeni’s lawn care guy knocked on his door, asking him to move his car. He was confused, as his car was in his driveway. He soon found that the lawn care guy was talking about the white Tesla Model 3, which was parked on his lawn and the footpath, tethered to his house via an electrical cord plugged into an outside 120V outlet on his house.

Fraumeni didn’t know who owned the car, and, in a remarkable display of kindness and patience, didn’t immediately yank the plug from his house, urinate on some tires, and call a tow truck. Fraumeni waited a few hours before calling police, who determined the car wasn’t stolen, and found the owner’s name. Around noon, the owners, a man and a woman, returned and the car, according to neighbour reports, had been there since at least the previous midnight, leaving the total charging time at about 12 hours.

OK, not whole lot of money, but that’s hardly the point here. Who the hell just parks on someone’s lawn without permission and plugs into their house? A jackass, that’s who. I’m about certain that a man as seemingly understanding and kind as Fraumeni would have happily let them plug in if they had bothered to ask, and likely would have helped them park somewhere off his lawn. 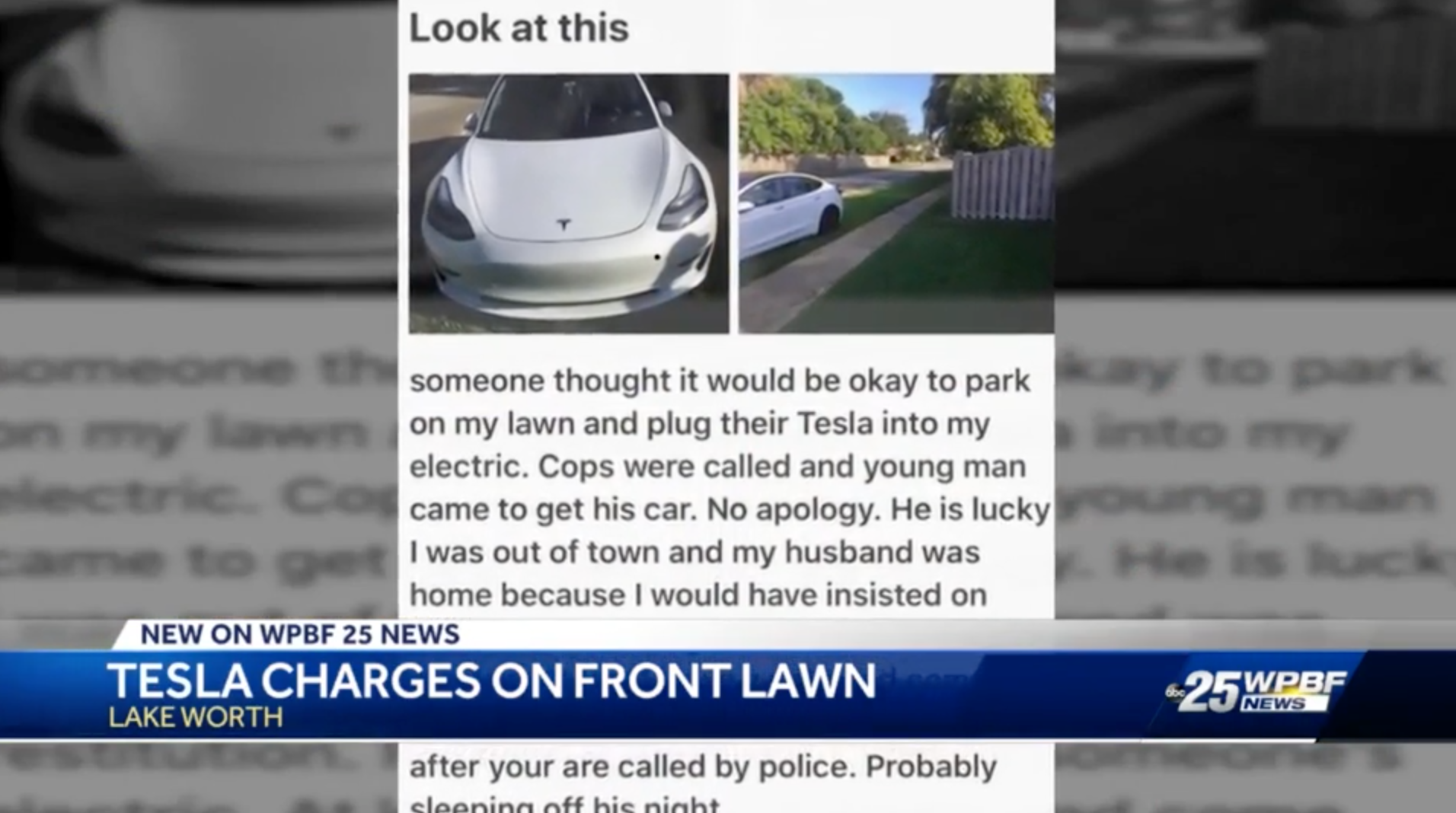 The jerks who owned the Tesla said they were visiting a friend when they realised they were out of power, and offered no compensation or apologies, according to a Facebook post left by Fraumeni’s wife.

Fraumeni declined to press any charges he certainly could have against the owner, and did not demand compensation. Because he’s a saint, apparently. Conversely, I feel like most of us would be telling the Tesla owner that, no, we had no idea how all that faeces ended up on their hood. Probably a sick raccoon?

I think it’d be fine to ask a homeowner to do this, and offer them some compensation — I mean, give the owner, what, $10, how hard would that be? And, oh, also, you could consider not parking on someone’s fucking lawn for twelve hours.

Who are these people? Why are they so terrible? Why can’t they read the damn range indicator in their car’s stupid dashboard-tablet? Do they do shit like this all the time? If so, how are they not just a disembodied voice coming out of a cigar box by now?

This is where bad Tesla stereotypes come from. Don’t be like them.