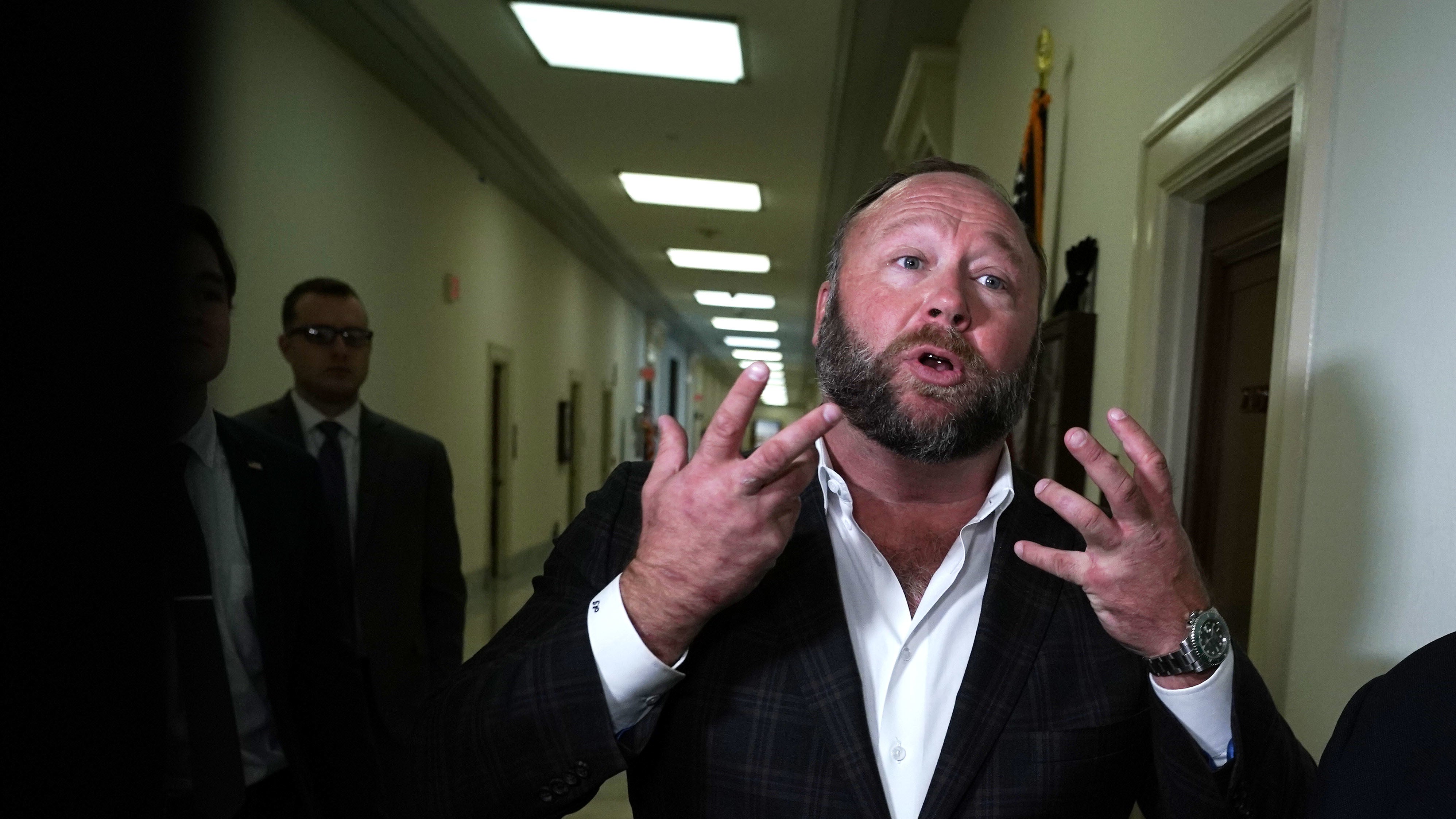 New details surfaced Tuesday concerning the allegations that child pornography had been discovered on a server linked to conspiracy theorist and radio personality Alex Jones, operator of the InfoWars website.

Jones claimed last week that he had been the target of a malware attack, which left child pornography on his servers, prompting an FBI investigation. That investigation, which the FBI will not confirm, began several weeks ago, Jones’s attorney Norm Pattis told reporters.

A motion filed in a Connecticut lawsuit against Jones brought by the families of Sandy Hook victims offered a few new details about the apparent investigation, information that was not previously disclosed by InfoWars.

Attorneys representing the plaintiffs—the immediate family of a child and an educator killed in Newtown, Connecticut, massacre six and half years ago—say a forensics firm hired by the plaintiffs discovered the illicit images in material Jones was ordered to produce by the court.

After discovering an image that appeared to be child pornography, the attorneys said, they immediately contacted the FBI.

“The FBI directed counsel to give control of the entire document production to the FBI, which was done. The FBI advised counsel that its review located numerous additional illegal images, which had apparently been sent to Infowars email addresses.” 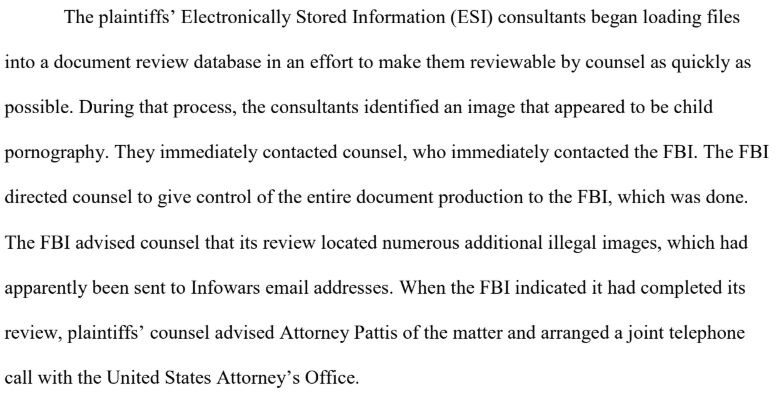 It is not clear whether Jones or any of his InfoWars associates were aware the images existed.

Monday’s court filing states that InfoWars produce “a massive volume of documents” and indicated they did not have time to review all of the contents to “cull the non-responsive documents.”

The plaintiffs appeared to accept this version of events, writing: “It is worth noting that if the Jones Defendants had engaged in even minimal due diligence and actually reviewed the materials before production, they would have found the images themselves.”

The purpose of the filing was to draw the court’s attention to comments Jones made on his radio show this weekend, in which he appeared to make threatening remarks toward the plaintiff’s lawyer, Chris Mattei. At one point in the broadcast, shortly after slamming his fist down on a photo of Mattei, Jones appears to mutter, “I’m gonna kill…”

The plaintiffs noted that knowingly possessing or transmitting such material is a serious crime. It is now the FBI’s task to discover whether Jones or any of his associates were aware the images had been sent to InfoWars and stored on its servers. (It’s FBI procedure not to comment on any ongoing investigations, nor confirm or deny their existence.)

The lawsuit itself accuses Jones of purposefully propagating lies about the school shooting, namely that it did not actually occur; directing others to “investigate” the matter, which has led to the continual harassment of victims; and profiting off of these defamatory statements. (Jones has denied the allegations.)

“As a result of Jones’ campaign, the families and survivors of the Sandy Hook shooting have been forced to endure malicious and cruel abuse at the hands of ruthless and unscrupulous people,” the complaint says.

According to previous court filings, Jones and InfoWars initially reported finding some 80,000 documents responsive to the plaintiff’s requests—which included files related to the shooting at Sandy Hook Elementary and InfoWars’s “investigation” into the families of the victims.

The precise origin of the alleged child pornography is unclear, though may have come from materials produced from the servers of Free Speech Systems, Jones’ for-profit e-commerce business. Jones has also produced responsive material from his personal email account, including 75 emails and 55 documents.

In April, the court granted attorneys for the families permission to depose four witnesses in the suit, including Jones’ father, David Jones, manager of human resources at Free Speech Systems (FSS). The company’s IT manager, Michael Zimmerman, was also deposed.

An April 2019 court filing shows FSS’s server held over 10,000 documents concerning the Newtown massacre alone, including thousands of files on the family members of those killed. The search of FSS’s server also turned up over 16,000 files on Wolfgang Halbig, a former state trooper and frequent InfoWars guest who’s pushed theories online that the Connecticut shooting was a hoax.

Attorneys for the families could not be immediately reached for comment.