The Amblin projects of the ‘70s, ‘80s, and ‘90s are more than mere films. They’re our memories, our fears, our dreams. Jaws scared us from going into the water. The Goonies got us to jump on our bikes and go off on an adventure. E.T. helped us believe in aliens. And next week, two of the best poster artists in pop culture today are bringing those memories into a new reality.

Matt Ferguson and Florey, who previously collaborated on this excellent Spider-Man poster, are about to open an exhibition called “Amblinesque,” a show of limited edition posters based on the films of Amblin and Steven Spielberg being presented by Bottleneck Gallery and Vice Press. It debuts June 14 from 7:00-9:00 p.m. at the Bottleneck Gallery, 60 Broadway, Brooklyn, NY, and remains on display through July 10. The artists have tackled a slew of different Amblin properties from the aforementioned E.T. The Extra-Terrestrial and Jaws, to Jurassic Park, Back to the Future, Close Encounters of the Third Kind, Gremlins, and more.

io9 is excited to exclusively debut 10 pieces from the show, five from each artist, which represent only a portion of the total. These are by U.K. based artist Matt Ferguson, and they celebrate the full Back to the Future trilogy, Gremlins, and Raiders of the Lost Ark. 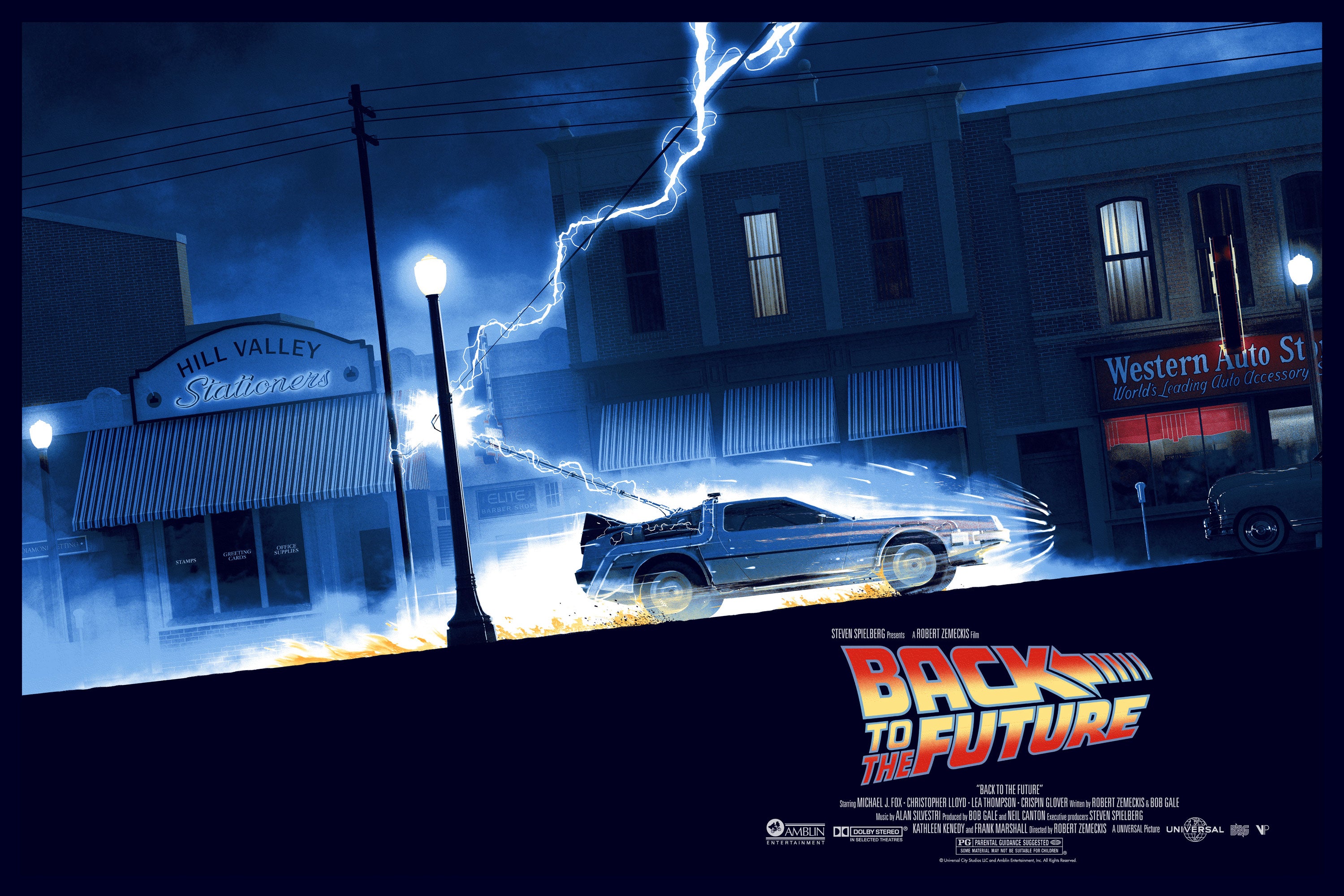 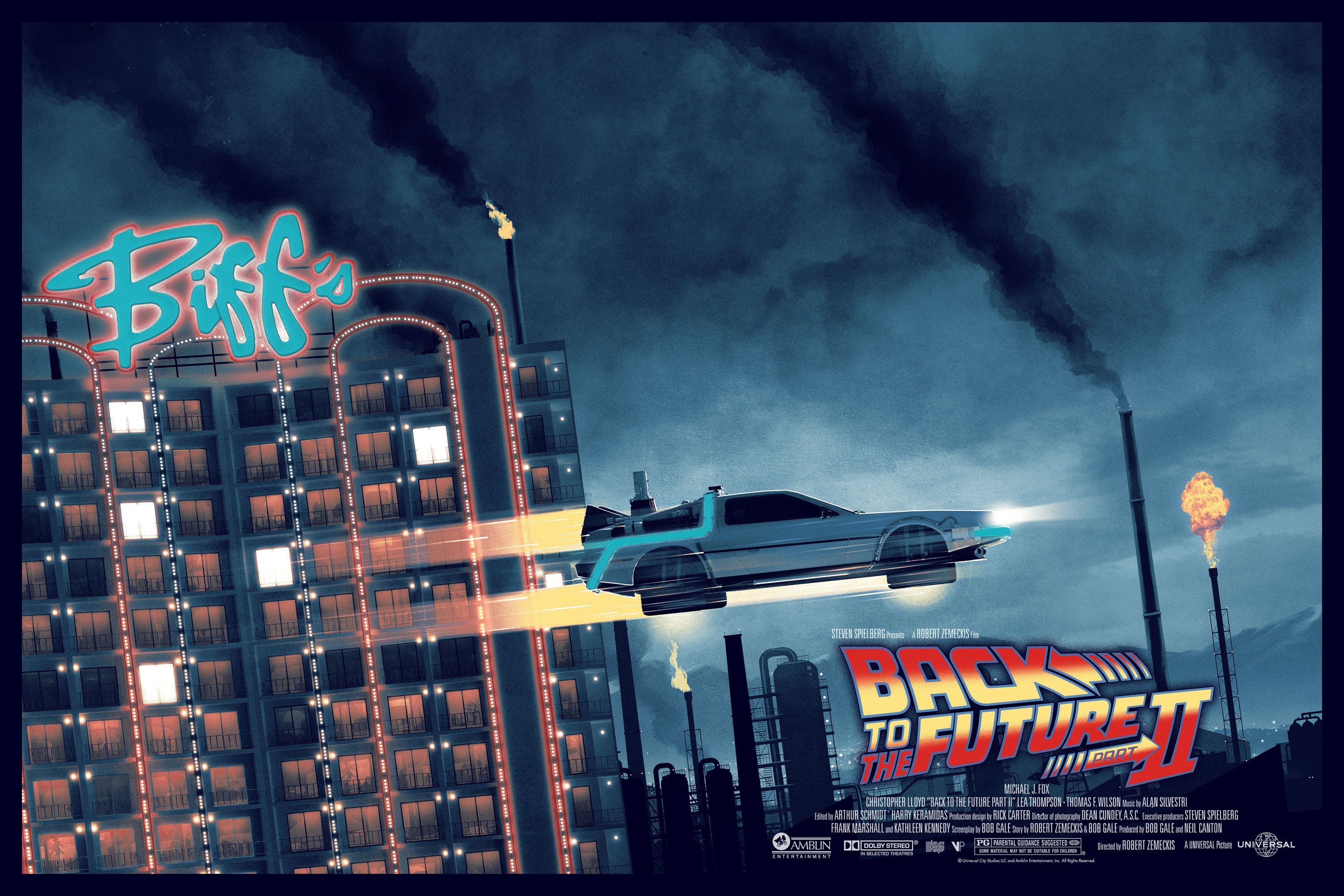 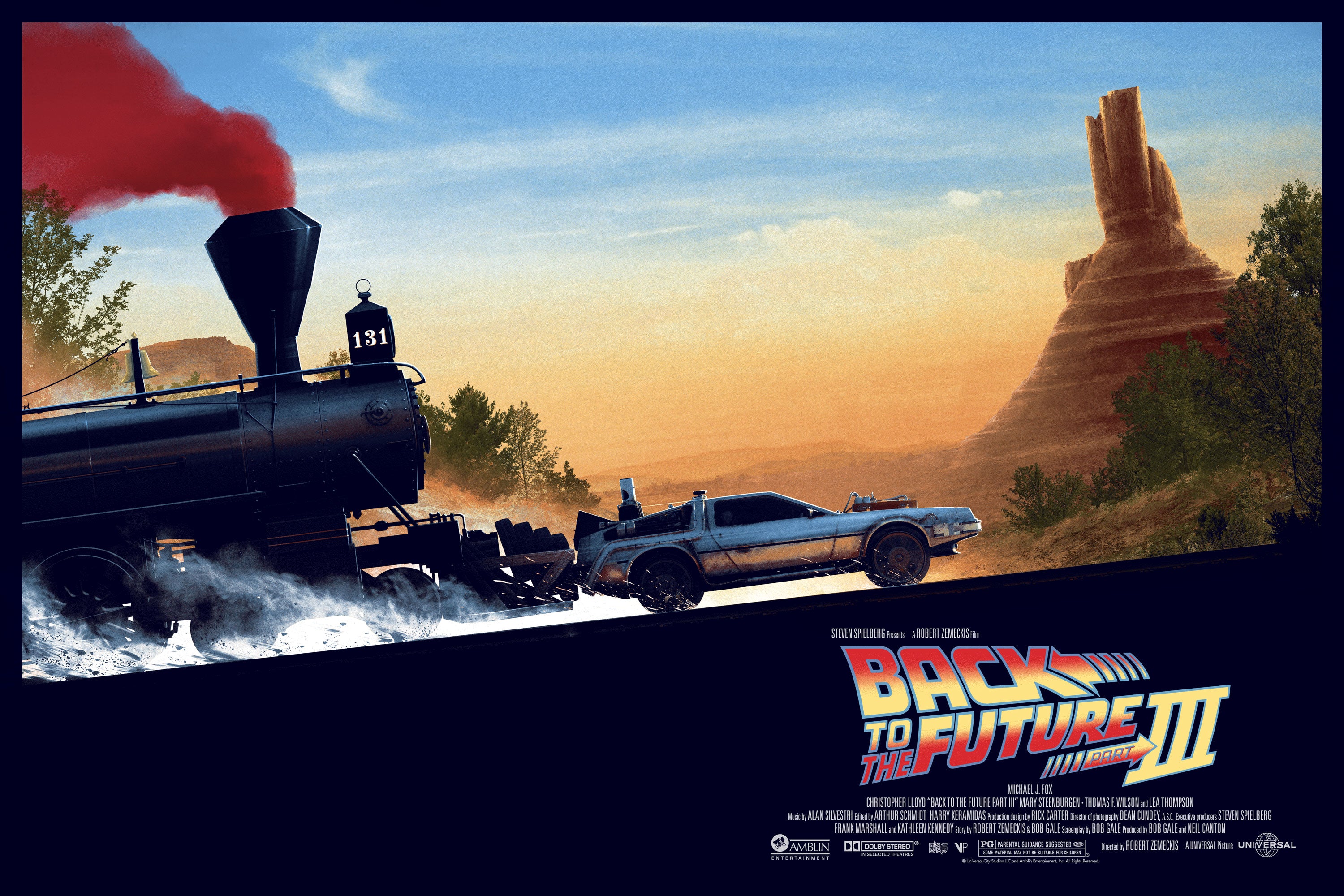 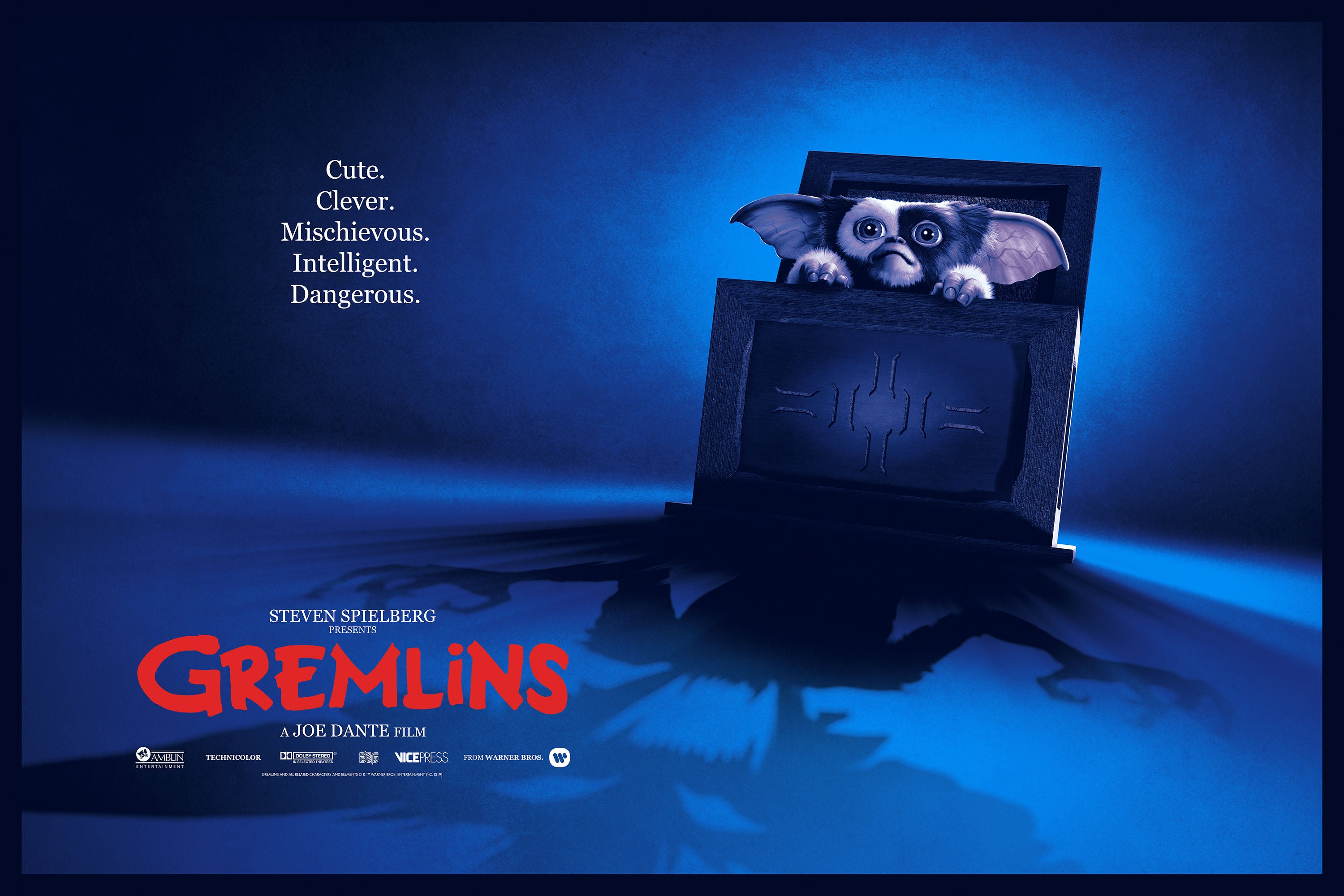 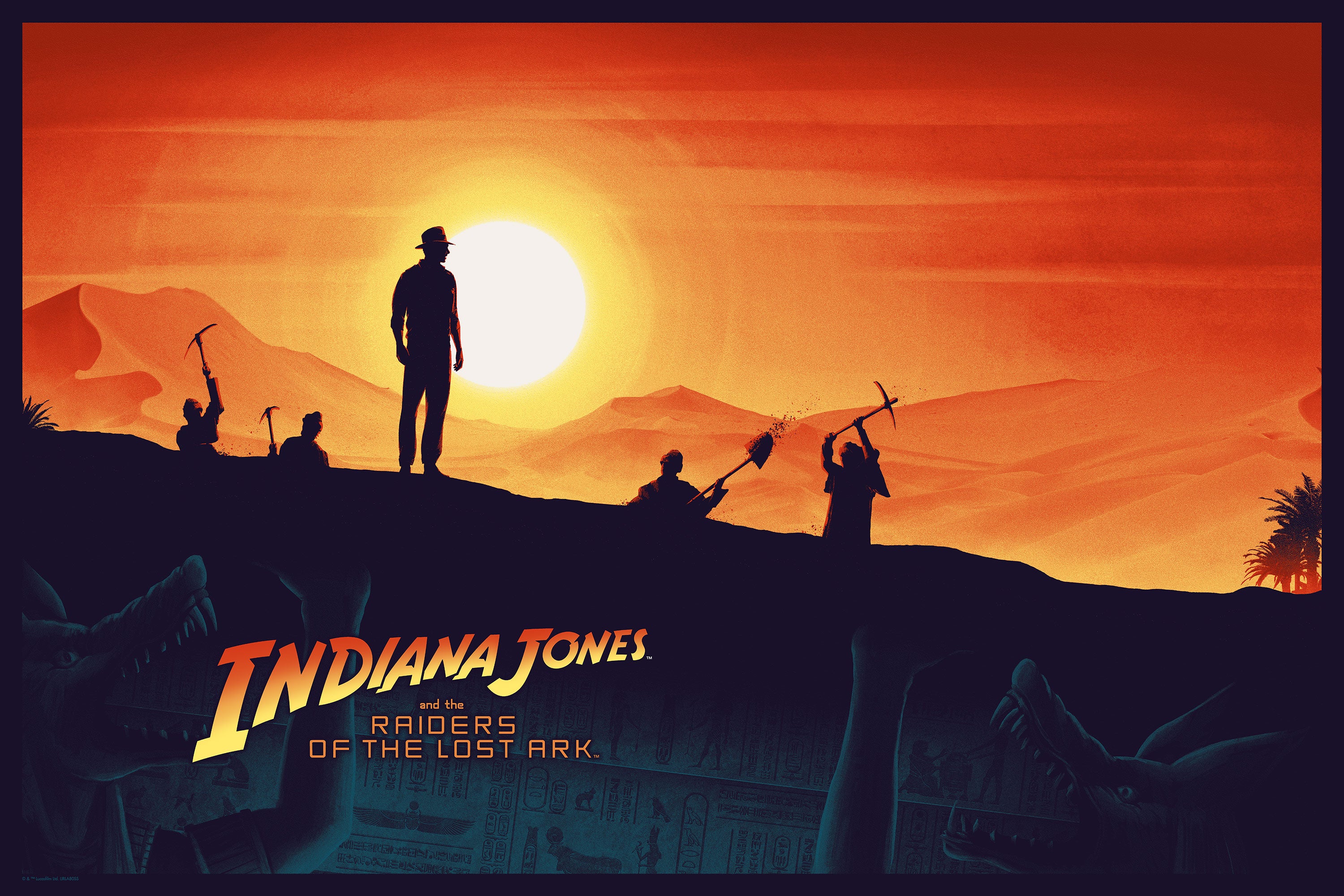 You’d think a show as ambitious as this would’ve had a huge origin story but, according to Ferguson, it was quite simple.

“I did a Jurassic Park poster last year that went down quite well, so I thought I’d carry on doing Spielberg posters in that same format,” he told io9 via email. “That then led Joe [Bouganim] at Bottleneck to ask if I wanted to do a whole exhibition of work based on Amblin and Steven Spielberg.”

The answer, of course, was yes—but the sheer amount of titles and work he’d need for a show was too much for one person. Thankfully, Ferguson and Florey are friends who bounce all their work off each other, so he knew exactly who to ask to help. “I asked if he would come on board in a more official capacity and help make it the best it could be,” Ferguson said.

Here are five reveals from the Australian-based artist Florey; you’ll see his own takes on Back to the Future and Raiders of the Lost Ark, as well as Jaws, E.T., and Jurassic Park. 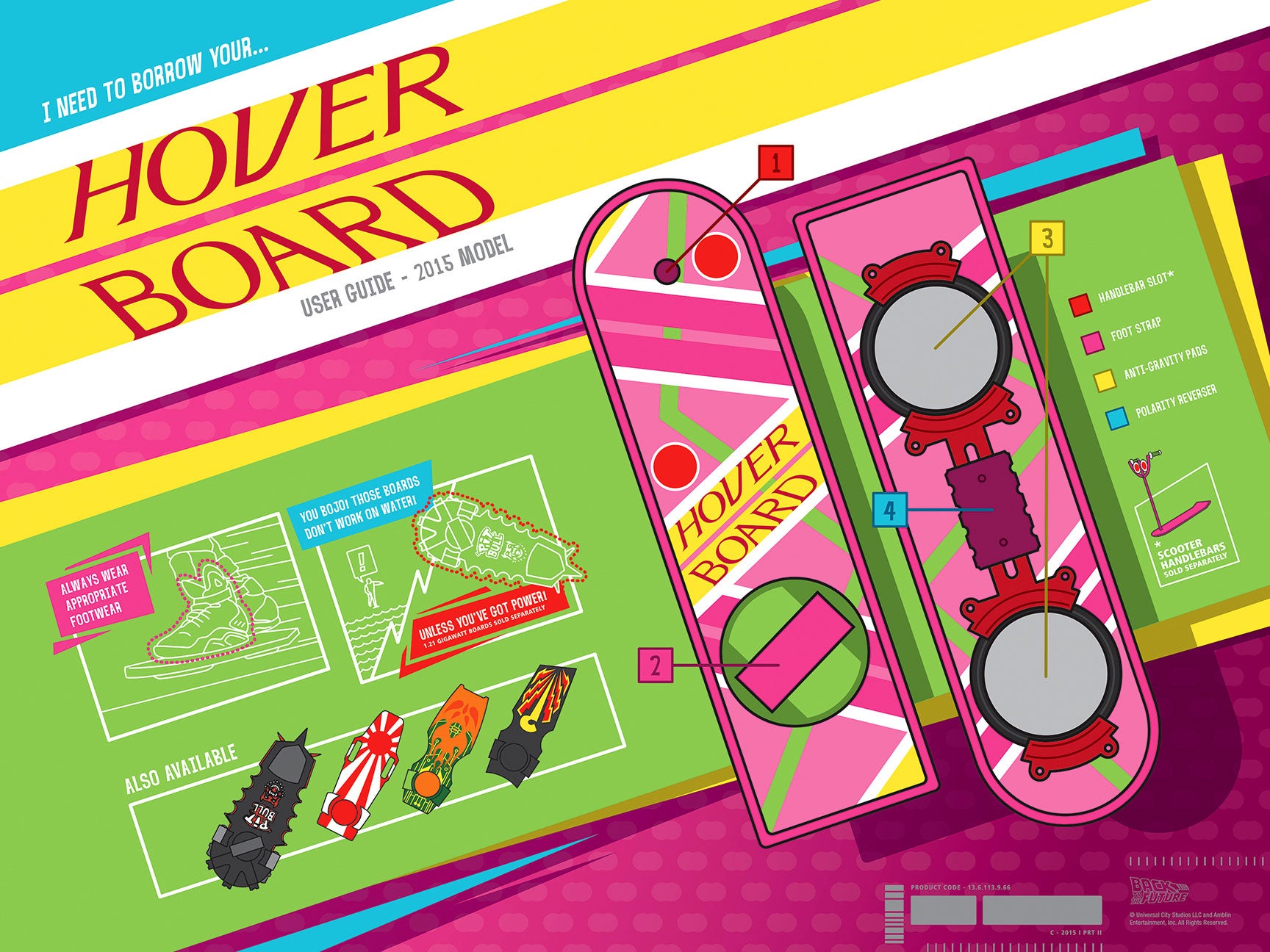 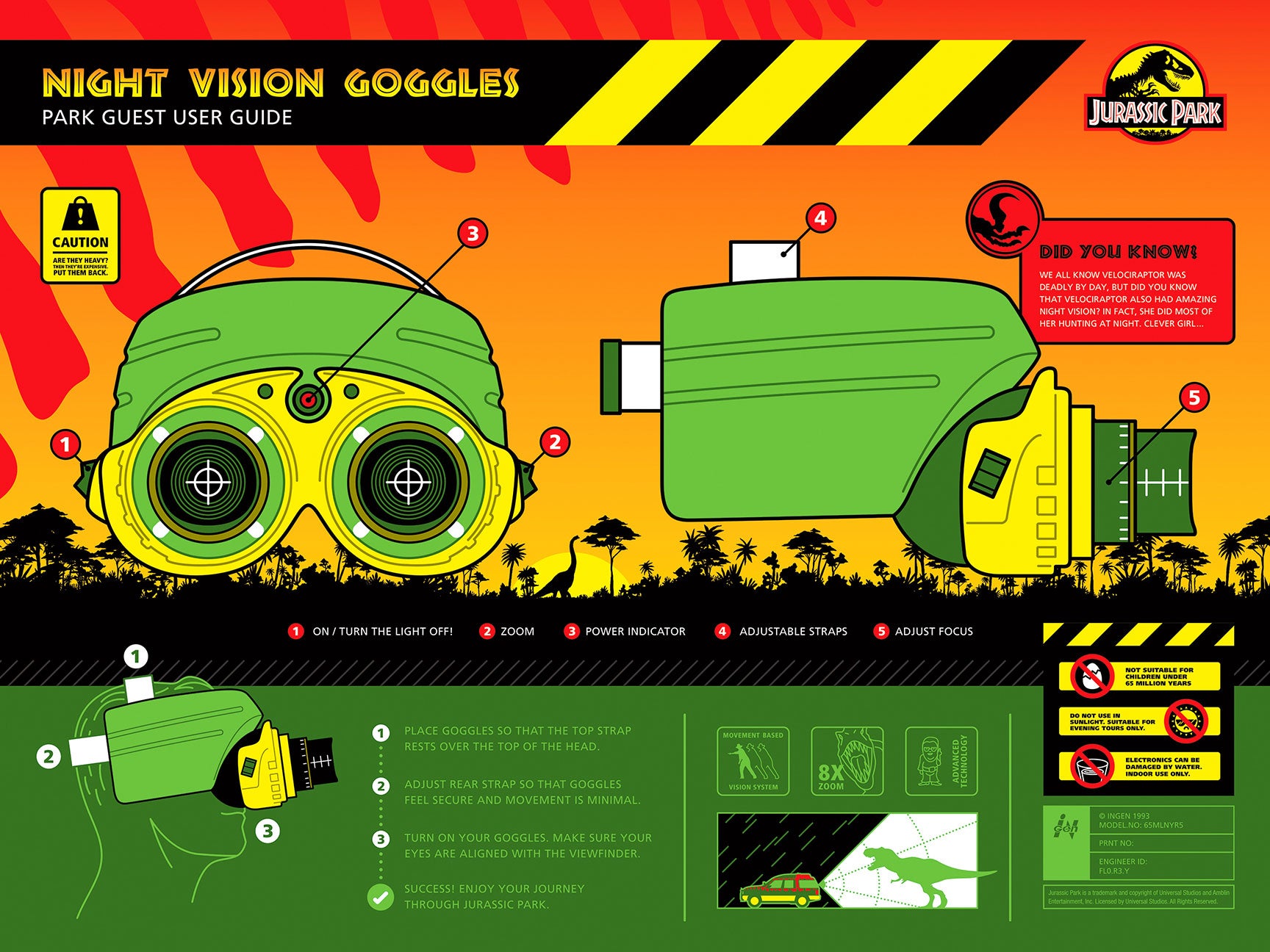 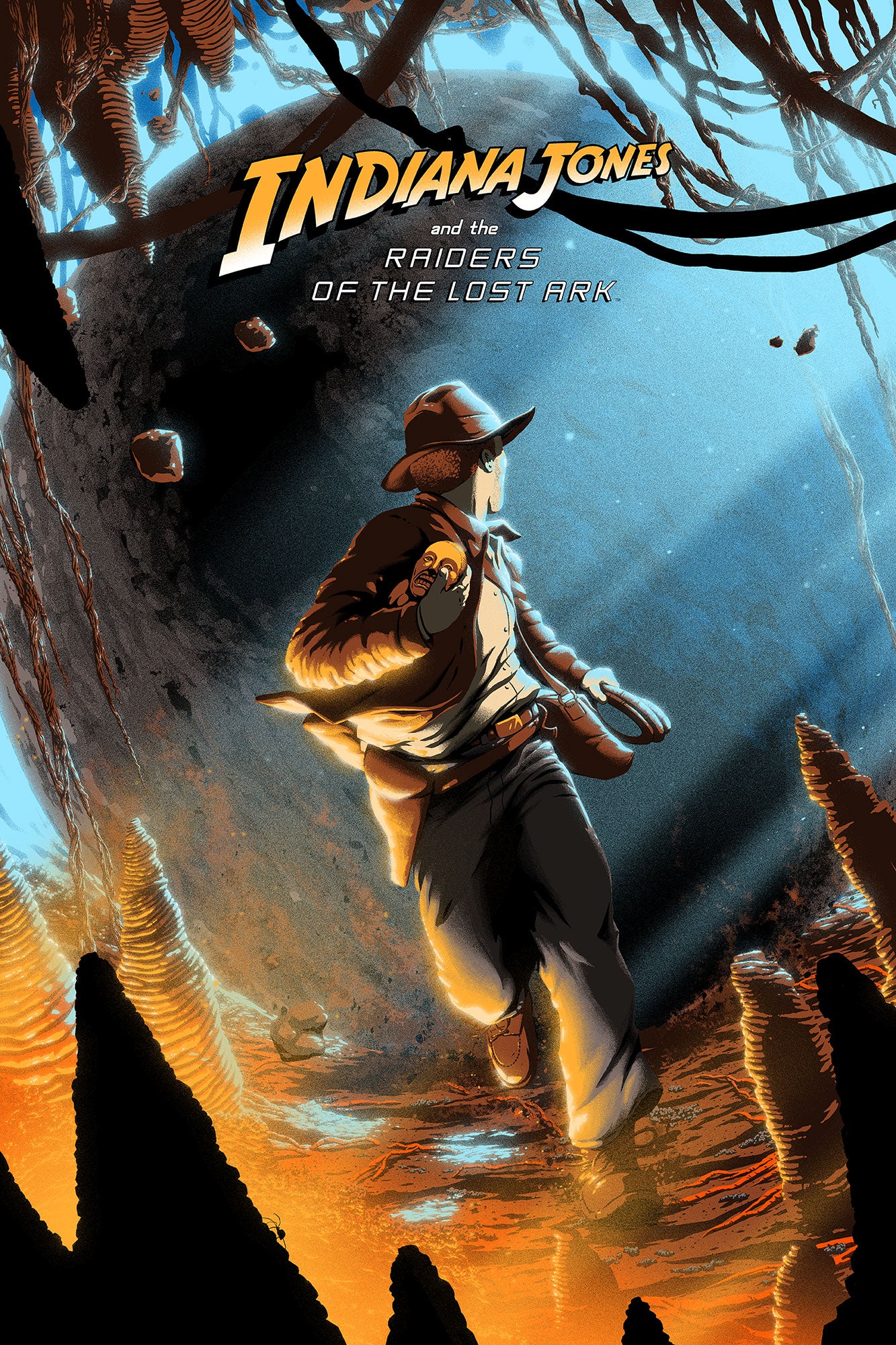 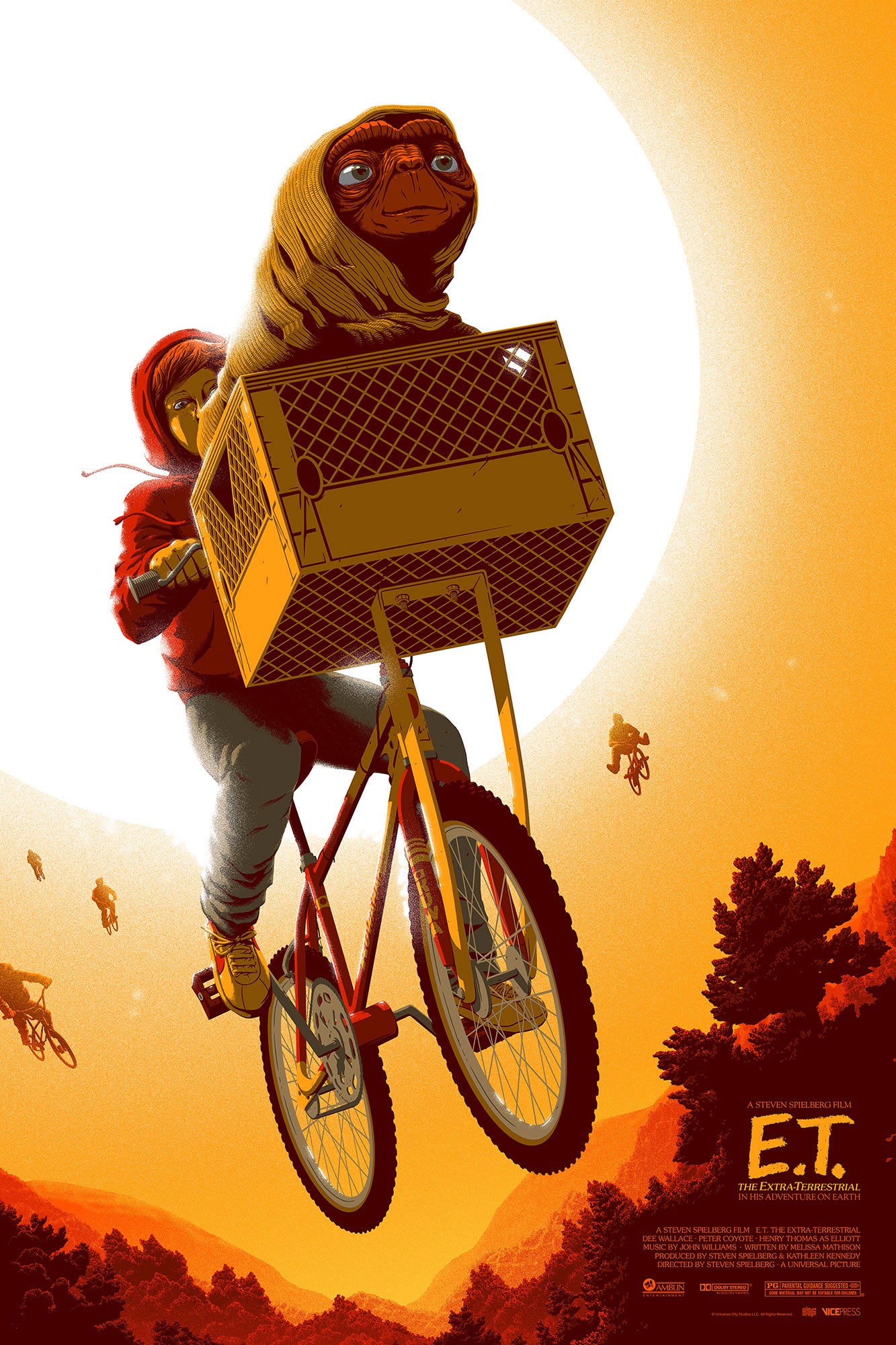 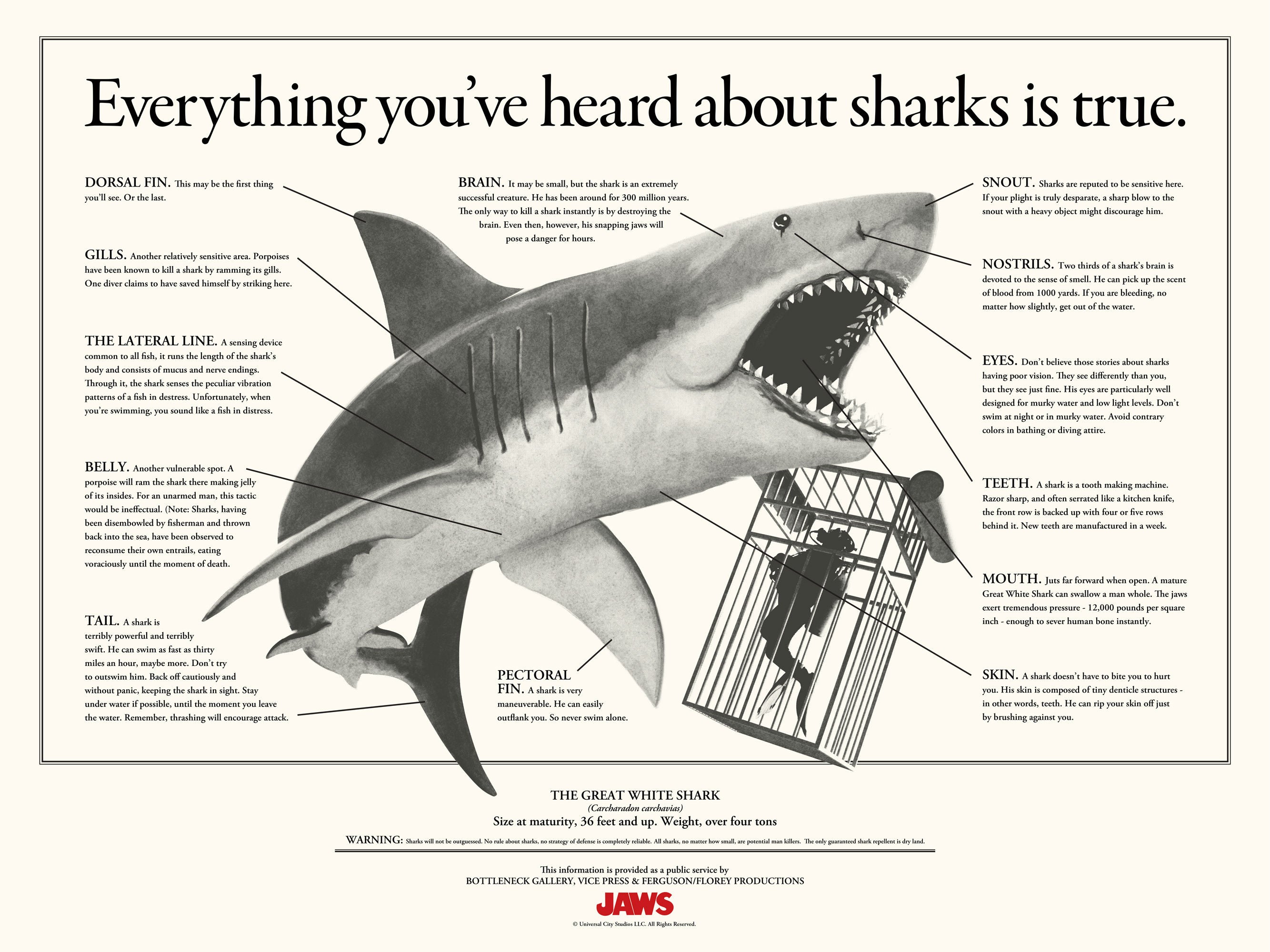 To start, each artist came up with a wish list of films from the Amblin catalogue, which was itself a challenge. “For me, the hardest part about this show was not being able to do every single film on the list,” Florey said. “I’d say I got about halfway there to covering them all,” Ferguson added. “Things like licensing and approval held up a few titles...which I’ll revisit and get to do in future no doubt.”

The pair “worked closely with Amblin, Universal, and Sony/Columbia” who were “hugely supportive of this whole thing and a joy to work with” Ferguson said. But, ultimately, they didn’t want the show to just be one flavour. So most of Florey’s work took a different direction from Ferguson’s, which is pretty evident when looking at the above pieces.

“My main role in the show was to do some pieces that added a little variety and would look quite different from Matt’s series of big landscape movie posters,” Florey said. “I knew I absolutely had to do posters for E.T. and Raiders of the Lost Ark though.”

When asked what each other’s favourite posters were by the other, the choices weren’t obvious. “I really love his Close Encounters,” Florey said of Ferguson’s work. “It’s one of my absolute favourite films and this just fits it so perfectly.”

“The E.T. he did is brilliant,” Ferguson said of Florey. “I got serious envy when he showed me his rough for that. It sums up the uplifting nature of that movie so well.”

Hopefully, “Amblinesque” will do that too: bring people who see the artwork back to those childhood memories so deeply influenced by Amblin movies.

If you can’t make the opening, which both artists will be attending, Bottleneck Gallery and Vice Press will release the leftovers online in the near future.