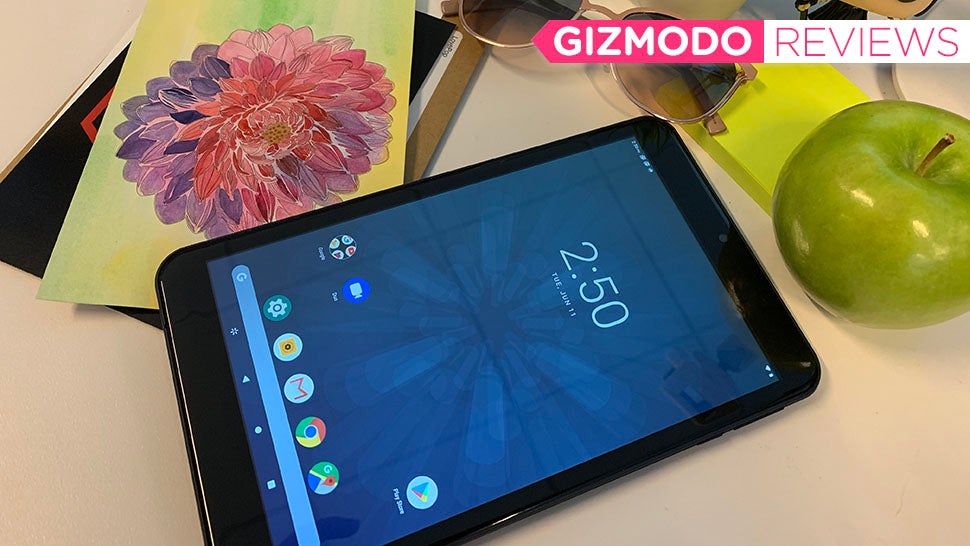 Beautiful, it isn’t, but it is functional and cheap. (Photo: Victoria Song, Gizmodo)

There’s affordable, and then there’s cheap. At $US64 ($93), Walmart’s exclusive 8-inch Onn Android Tablet is cheap with a capital C. That’s not necessarily a bad thing—the Amazon Fire tablet is similarly inexpensive and there’s something to be said for comfortably disposable tech. What it really comes down to is what sort of cheap you’re looking for, and which corporate retailer you feel most comfortable with throwing ads in your face.

Editor’s Note: Yeah we don’t have Walmart here in Australia, but we froth cheap tech stories as much as you.

A super cheap tablet from Walmart

It works. Runs off Android. Access to Google Play Store.

Slow. Gets hot if you watch too many videos. Walmart bloatware.

I assume if you’re interested in a $64 tablet, you’re well aware it’s not going to be able to do any heavy-duty processing or run graphics-intense applications. For that, you’d need something beefier like an iPad Pro, which starts at $800 for the 11-inch model. (For the same price, you could get 12.5 of these Onn tablets) So what does $US64 buy you? An 8-inch IPS touchscreen with an 800 by 1,280 resolution, a 1.3GHz processor, 2GB of RAM, and an Android 9 operating system.

That might sound like spec soup, but what you get is a tablet that can best be described as “incredibly fine.” It’s the sort of thing where you stick it on a nightstand or a coffee table and it functions perfectly well as a budget e-reader or secondary video player. However, ask it to do more and you’ll run into some issues.

I carried the Onn tablet around for three weeks to get a feel for it. When it came to web browsing, it did what it was supposed to. The only problem I encountered was that it’s slow and lags while scrolling through menus, websites, or ebooks. Likewise, it was fine for watching a short 2-3 minute YouTube video, but anything longer, the tablet would get disturbingly warm. I tried streaming this 4.5-minute video of the Hadestown cast performance at the Tonys and I noticed my fingers started getting hot about three-quarters of the way through the video. A 30-minute episode of Brooklyn 99 on Hulu left my lap quite toasty, and I decided not to push my luck any further than that.

Some latency is to be expected when you’re dealing with electronics this cheap, and that’s fine for things like reading or web browsing. It’s less fine for things like video calling. A Skype call with a friend was laggy, choppy, and thanks to the 0.3-megapixel selfie camera, I looked like a grainy monster. Sound quality was also meh—though, again you’d be silly for expecting booming bass or super clear mids on a tablet at this price range.

The Onn tablet is also not something you’d want to take photos with. It has a measly 2-megapixel rear camera, so unless you have an ancient flip phone, chances are your smartphone has a much better camera. The only time I could see the Onn tablet coming in handy for photos is if your phone died. 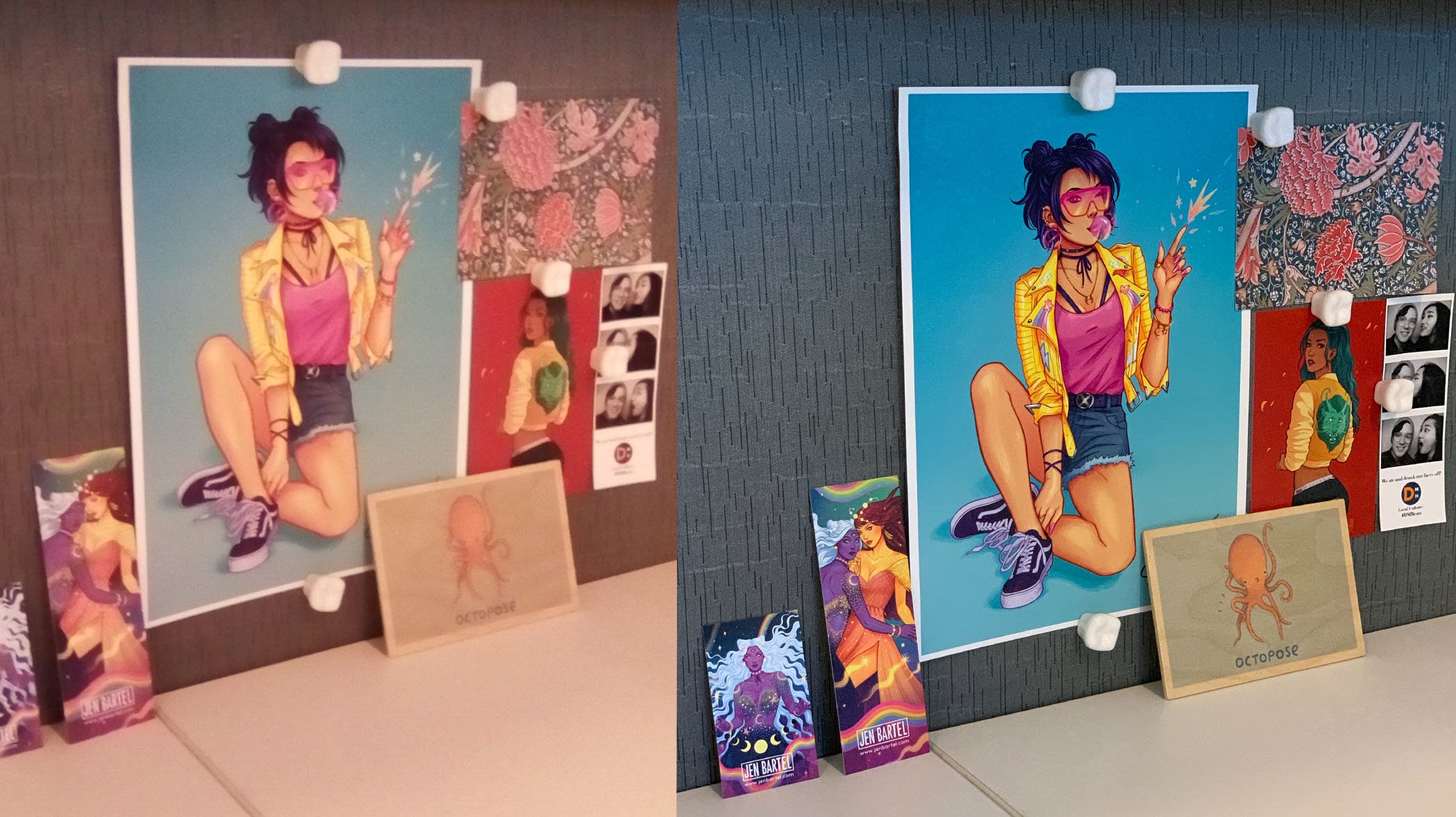 Photo with Onn Tablet on the left; my iPhone XS Max on the right. (Photo: Victoria Song, Gizmodo)

None of these things would necessarily be dealbreakers—of course, Walmart was going to cut corners somewhere for this price. My main issue was with the Onn tablet’s build. From the moment you unbox the tablet, it’s clear it’s made from some cheap materials. The tablet feels plasticky, and the screen is prone to scuffs. I carried it in my bag’s padded laptop and tablet sleeve and even then I’d pull it out to find odd marks that were clearly visible. Then, after about a week, the headphone jack started sputtering—half the time the tablet couldn’t recognise I had headphones plugged in, the other half I was subjected to lots of crackling. I plugged the same headphones into my work and personal computers but had zero issues. Battery life was also middling. I got maybe about two days of moderate use on a single charge—longer if all I was doing was reading or light browsing. 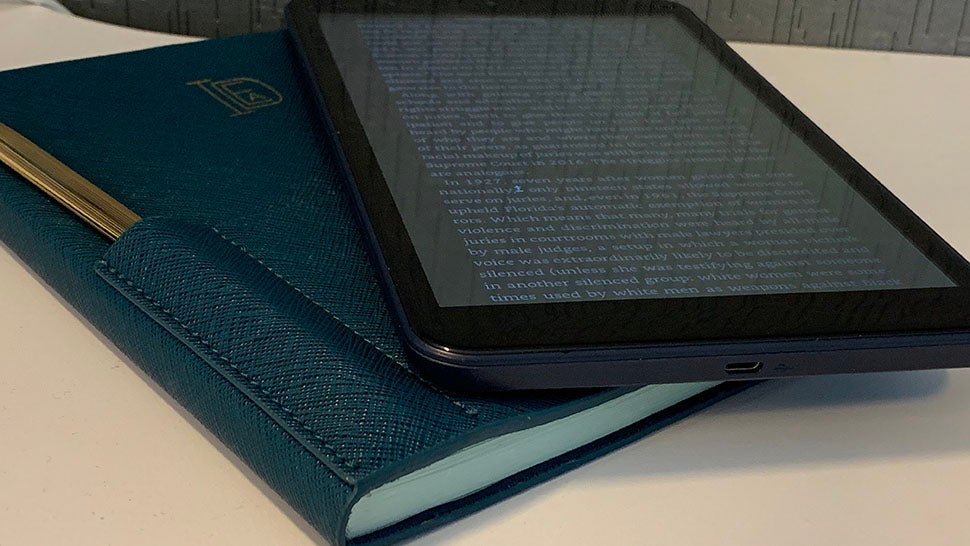 The Onn tablet does have a few things in its favour, however. Unlike the Fire tablet, the design is curiously devoid of Walmart branding. There’s an Onn logo on the back bottom left corner, but that’s easily covered by your hands. It’s also more subtle than the Fire tablet when it comes to pushing Walmart’s services. Whereas the Fire tablet runs an Amazon-focused OS that’s based on Android, you actually just get Android 9.0 with the Onn tablet. You also get the Google Play Store—a big advantage over the Fire tablet, which forces users to go through Amazon’s app store.

That’s not to say the tablet is free of bloatware. Oh no. It’s just less in-your-face. At the bottom of the screen, right next to the back button, you’ll find a special little Walmart icon in the navigation menu. Hitting it will take you to all the Walmart-specific apps preloaded onto your tablet. That includes the Walmart app, Walmart Grocery app, Sam’s Club, Vudu, and Walmart’s very own eBook Store. As far as I can tell, that icon is hard-coded into the tablet, and you don’t have the option to get easily get rid of it. 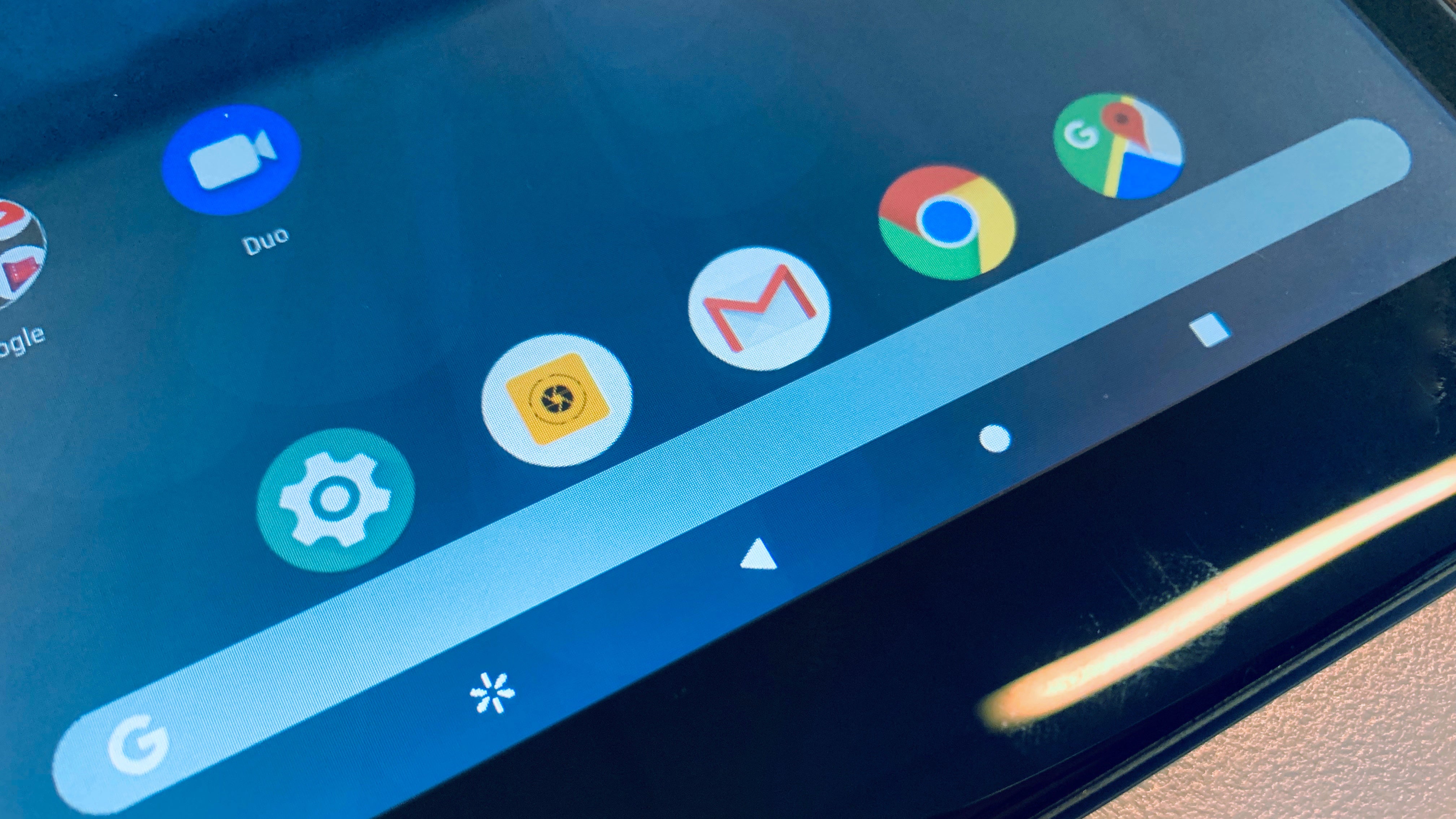 The screen is merely ok. But look at that ‘lil Walmart icon. (Photo: Victoria Song, Gizmodo)

The tablet box also comes with a coupon for you to get $US20 ($29) off in Walmart’s ebook store. I, a fool, decided to give it a whirl because like everyone, I love free stuff. While title selection was altogether fine, to get the $US20 ($29) off, I had to spend at least $US21 ($31) and there was no combination of available books that I wanted for a perfect $US21 ($31). That’s fine since I could just switch over to the Kindle app, except to take part in the deal I had to create Walmart account and now my inbox is a tragic repository of Walmart spam that I have unsubscribed from at least three times to no avail. (They. Keep. Coming.)

For under $US100 ($146), the only other real competitor the Onn Tablet has is the Amazon Fire. Spec-wise, it’s almost exactly the same as the 8-inch Amazon Fire HD 8, which retails for $US80 ($116) but is often on sale for less. The main differences is you get slightly more RAM with the Onn tablet and a better selfie camera with the Fire tablet. That and more blatant Amazon marketing—which may or may not irk you depending on how frequently you use Amazon services. Walmart might have baked its services into the Onn tablet, but for the most part, you can ignore it since the Walmart apps are bunched into one folder, the tablet operates off a full version of Android, and you get access to the Google Play Store. 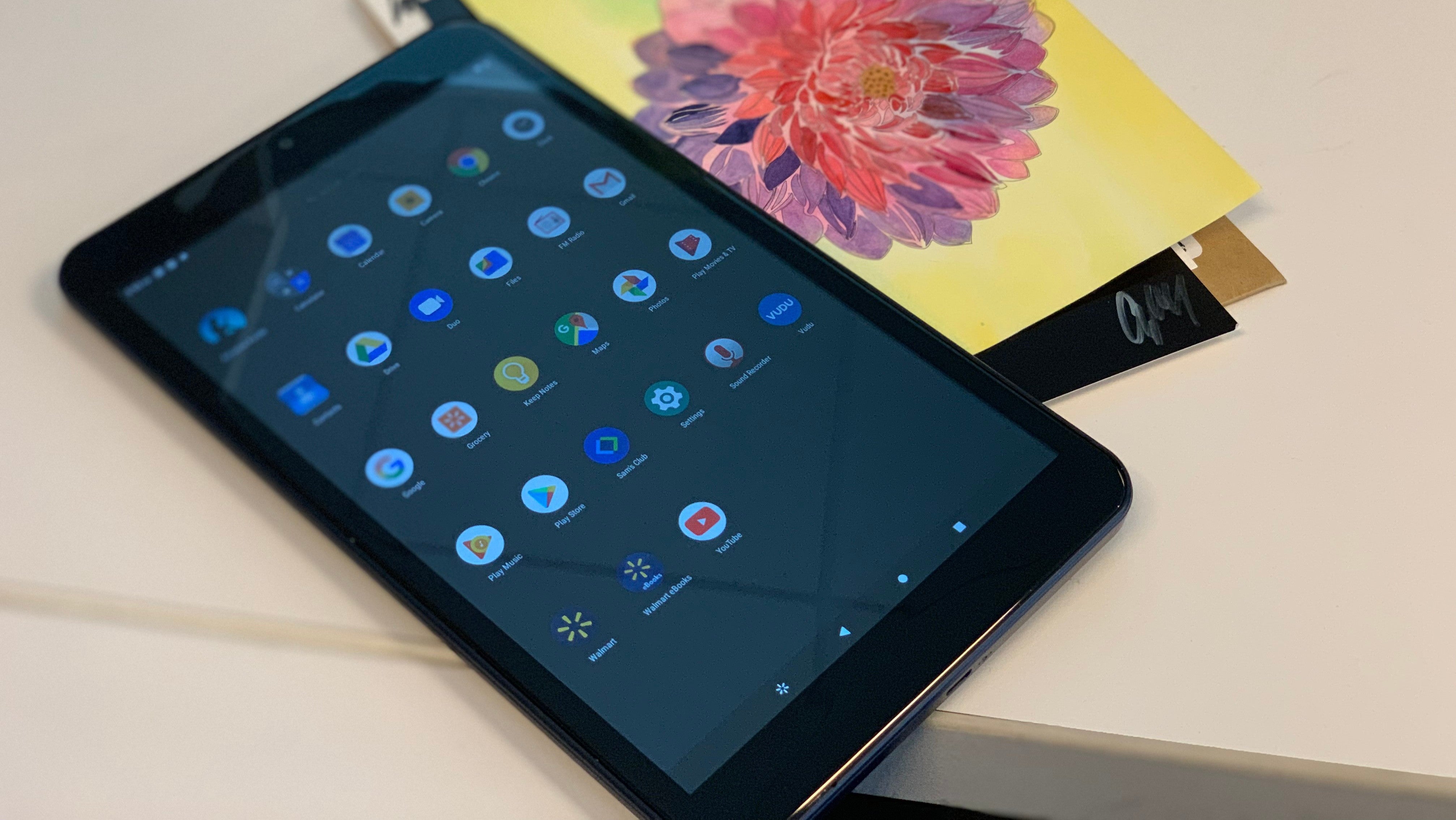 As long as you’re not expecting a powerhouse machine, the Onn Tablet is alright. It gets the job done when it comes to answering emails, reading articles, or watching short videos. Then again, your phone can do all that too—faster, too, with a better camera, and probably zero heating issues. If all you’re looking for is a slightly larger screen, albeit one that probably isn’t as nice as your laptop or phone, or something cheap for the kiddos to wreck, the Onn Tablet is wallet-friendly choice. But it’s not much more than that.