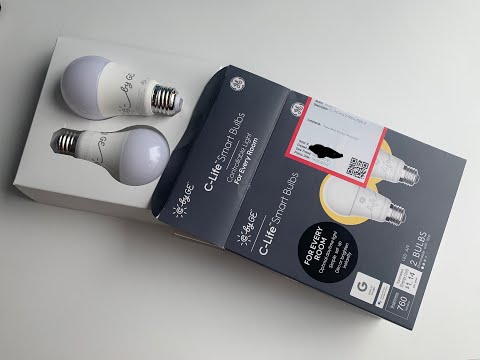 I’ve spent most of my day thinking about the video going around describing the absurd, 12-part process that’s required to reset GE C-Life smart bulbs. So I bought some and performed the Sisyphean ritual myself.

If you haven’t watched the video yet, go ahead and do it right now. I’ll wait.

Wild right? Why is it so complicated? Eight seconds on, two seconds off, seemingly forever. It’s kinda stressful, and it invites jokes about how connecting everything to the internet is dumb. We made the jokes, and so did everybody else.

For what it’s worth, doing it yourself is actually pretty easy, you just have to really focus so you don’t get mixed up. So much counting! Numbers are the enemy. At first, I wrote everything down and used my phone’s stopwatch app to try to get it right.

That turned out to be too much to concentrate on all at once. So instead, I just counted in my head and just kept repeating eight on, two off until I got the three flashes that indicate that the process is done. All in all, the it takes almost exactly a minute.

Before this ‘smart’ innovation, lightbulbs were simple. But the reality of making programmable home devices that you can automate and control from your phone is that, sooner or later, you’re going to have to deprogram them and set them up again.

So in that regard, I suppose it’s nice that there is a way to do it, even if it seems needlessly complicated. “This entire thing could have been avoided with a small button, or heck even a Mac style paperclip hole, for the reset,” designer Michael DiTullo speculated in an email.

“At some point, they realised they might need to reset the thing. That leaves the power source as the sole possible input, and I could see some usability engineer making this as complicated as possible to make sure someone didn’t accidentally do it.”

I also asked GE to explain, basically, what the hell? “We know technology can be complicated and are aware that our current factory reset process isn’t ideal,” the company said in an emailed statement. “We’re finding simpler methods for our users and appreciate the patience.”

At first, I thought that this functionality should be baked into the app, but then it occurred to me that if for some reason you lose your phone or that app gets deleted, you might be screwed without some kind of physical way of resetting your lightbulb?

If that’s the case, maybe next time splurging on the button would be the way to go. “While it is nice to save a fraction of a penny times a million lightbulbs,” said DiTullo, “it is also nice to provide a great product that doesn’t get made fun of on Gizmodo!”