How To Schedule Your Messages, Emails, And Tweets To Go At Any Time 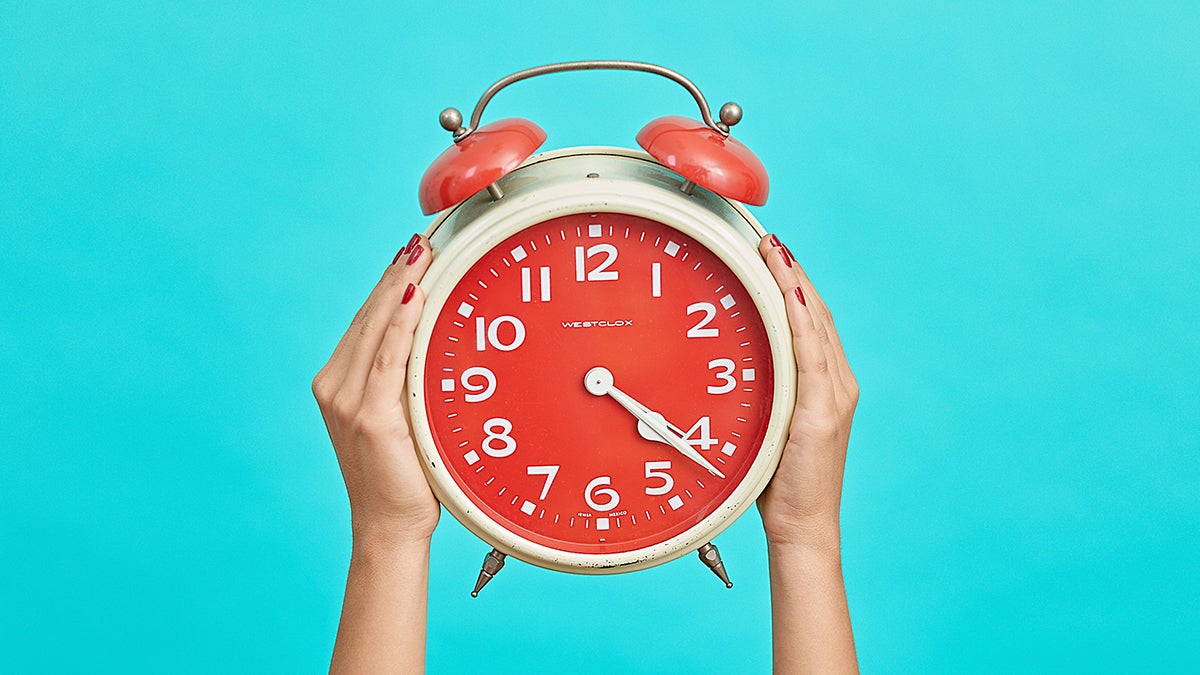 Thanks to the internet and all the apps and services that run on top of it, we can now ping someone on the other side of the world instantly—but that person doesn’t necessarily want to hear from you in the middle of the night. The same goes for social media sharing, because the time when inspiration strikes may not be the best time for sharing.


Enter the magic of scheduling: Scheduling emails, instant messages, texts, and social media posts. You’ve now got a choice of native tools and add-ons for this, which means you don’t need to wake up your boss in the middle of the night or distract your friends in the middle of the working day.

Gmail now has a scheduling feature built right in. If you’re composing an email on the web, open the little drop-down menu next to Send then choose Schedule send, and you get to specify a date and time (or just choose a preset like “tomorrow morning”). Queued up emails can be viewed and edited from the Scheduled link on the left of the web interface.

The feature has made its way to Gmail on Android and iOS as well: When you’re composing a new message or a reply, tap the three dots in the top right corner, then choose Schedule send. Again, the app lets you choose from one of the suggested options or a specific date and time of your choosing. 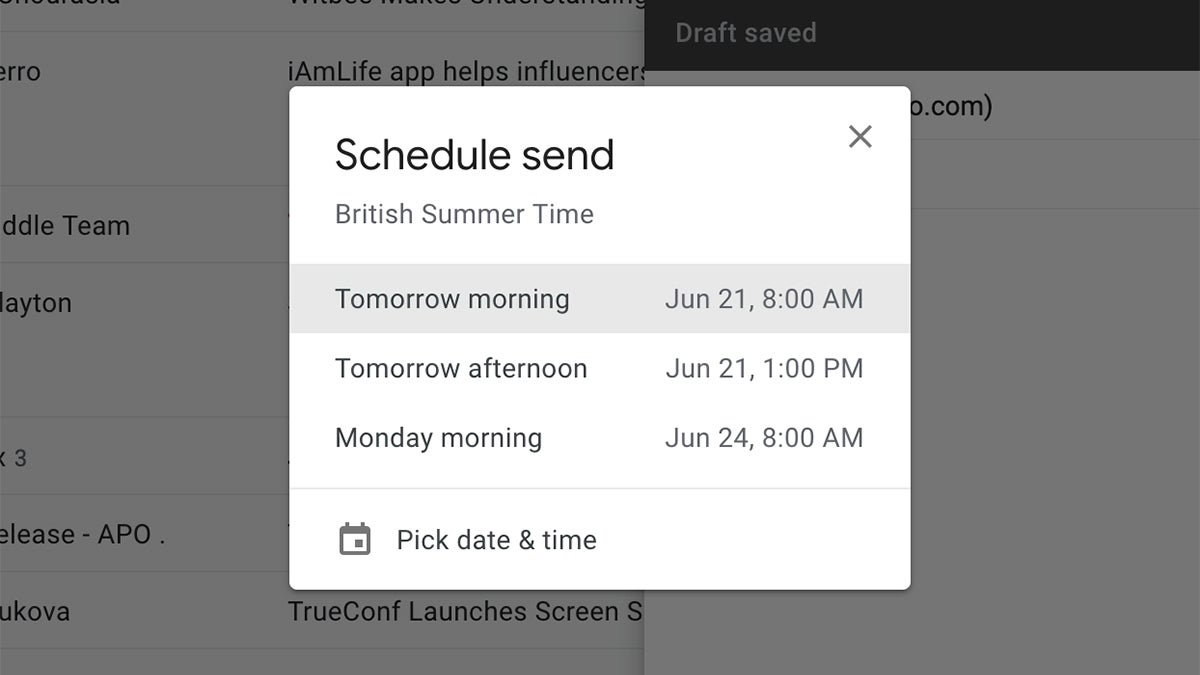 Emails can be scheduled in Outlook as well, but only in the desktop programs for Windows and macOS, not on the web or on mobile. When you’re composing a new message or a reply, click the More options arrow under Tags, then set your Delivery options before sending it as normal.

On Outlook for Mac, it’s even easier—click the drop-down arrow next to Send, and choose Send later to pick your date and time. Whichever platform you’re using Outlook on, scheduled emails will stick around in the outbox until the designated time, so you can edit or cancel them if needed. 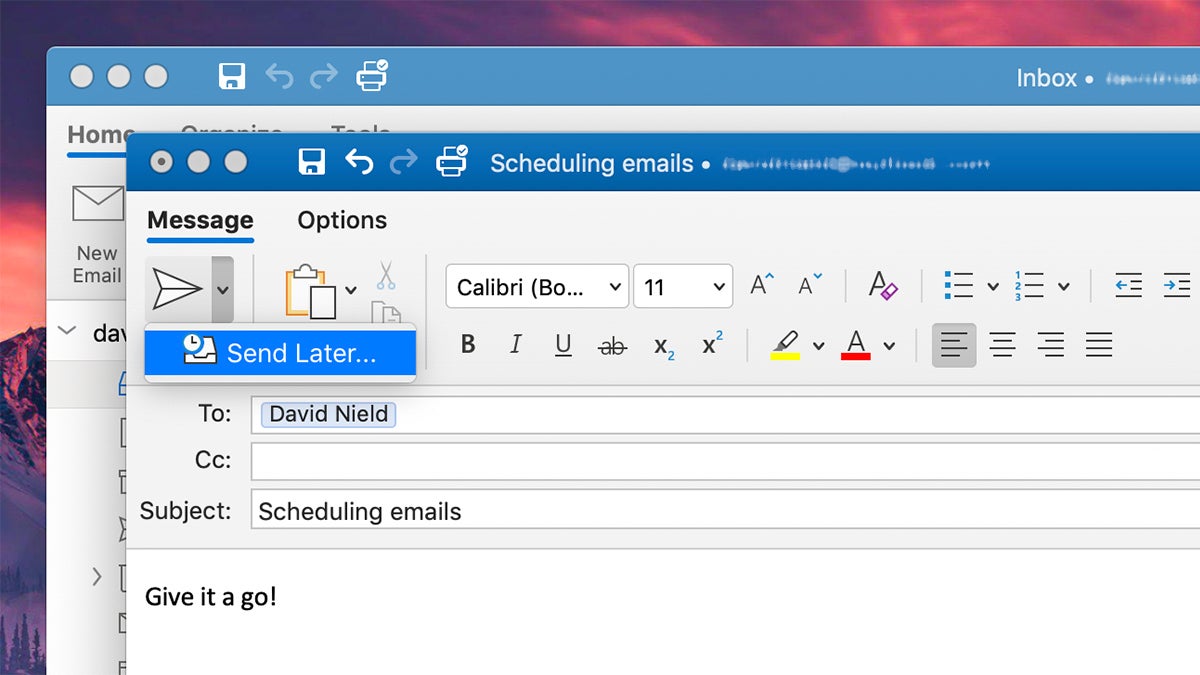 Apple Mail for macOS and iOS doesn’t come with a native scheduling feature, so you’ll either have to opt for one of the alternatives provided by Google or Microsoft, or check out another third-party app. Note that both Gmail and Outlook can work with iCloud email accounts, and schedule messages to be sent from them too.

Spark is an excellent email client for macOS and iOS (and Android), and it comes with a simple-to-use scheduling feature—it’s also free for basic personal use. Mailbutler is a suite of add-ons for Apple Mail on macOS that includes a send later feature. The free version of Mailbutler doesn’t include scheduled sending though, so you’ll need to cough up €7.95 (about $US9 ($13)) a month.

Scheduling SMS messages is possible, and it’s easiest on Samsung Android phones with the new One UI: While composing your message, tap the plus symbol to the left of the text entry box, then the three dots to the right that appear, and you’ll see the schedule option.

It’s not quite so easy on other Android devices. As our friends at Lifehacker point out, you can use Pulse SMS for the job, which is an app we’ve used and been impressed with in the past. The scheduling option isn’t part of the premium Pulse SMS package, so you can use it for free—when you’re composing a text, tap the three dots in the top right corner, then choose Schedule a message. 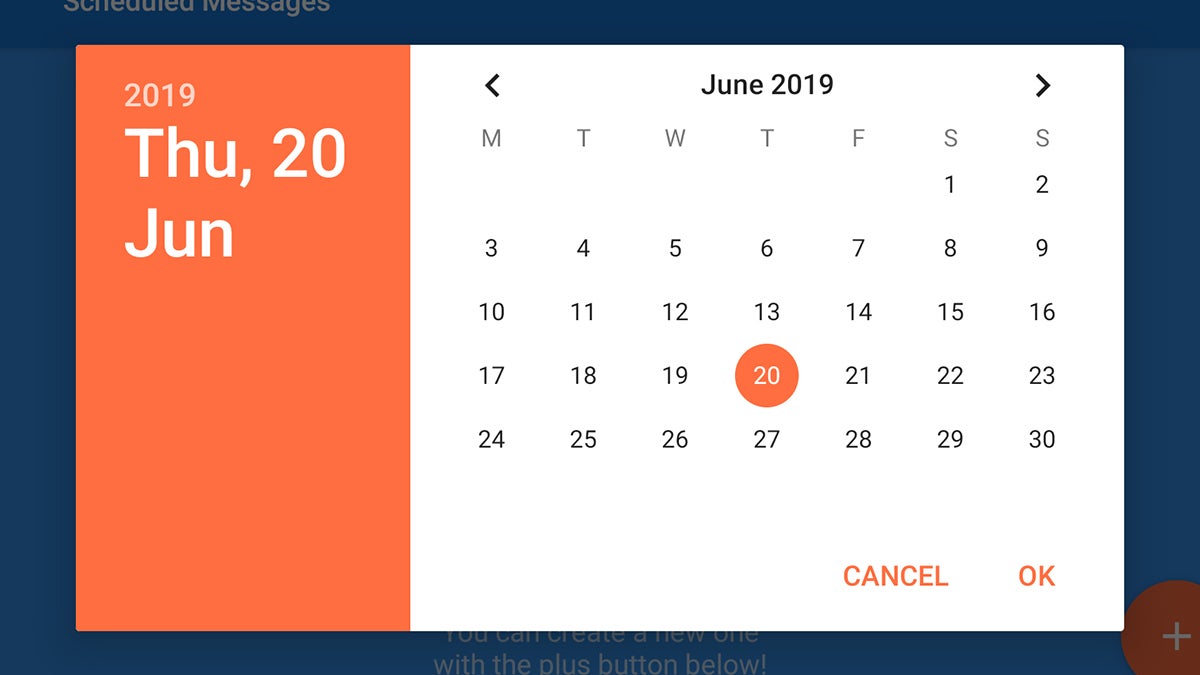 Our old friend IFTTT (If This Then That) comes into play as well. You can, for example, use the Date & Time option as a trigger and the Android SMS option as an action to have texts fired out at specific times of the day or week to specific people, but this solution doesn’t give you much in the way of flexibility. 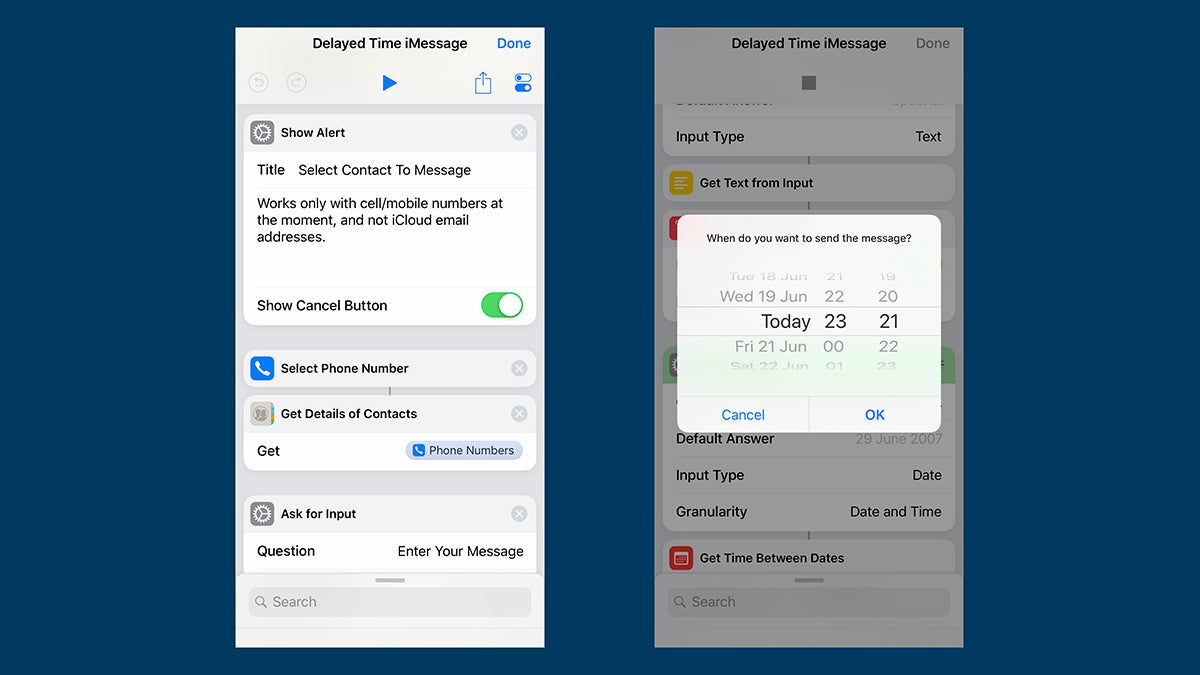 Over in the world of iOS, again as detailed by Lifehacker, you can use the Shortcuts app to schedule your texts. This shortcut asks for a contact, a message, and a time and date to send it—it then works out the number of seconds until that time and date, waits for that length of time, then sends the SMS. The only caveat is that your phone must remain unlocked all the while, so you might need to fire up a movie or start playing a game.

And we’re sorry to say that’s it—no scheduling options appear in WhatsApp, or Signal, or Telegram. Various third-party apps promise to schedule messages in these messengers for you (a quick web search will lead you to them), but having tested a few of them out we can’t recommend them as safe or reliable options.

Native scheduling tools for the big social networks are pretty much non-existent, at least they are unless you’re a brand or a business. For consumers, the only sort-of-built-in option is TweetDeck for Twitter—even then you have to go back to the old interface when composing a tweet to find the Schedule Tweet button.

A bonanza of third-party tools will do the job for you though, at least as far as Twitter goes. One of our favourites is Buffer, not least because it’s free to use as long as you stick to three social media accounts and limit yourself to 10 scheduled posts at any one time. You can post either at a specific time or on a preset schedule. 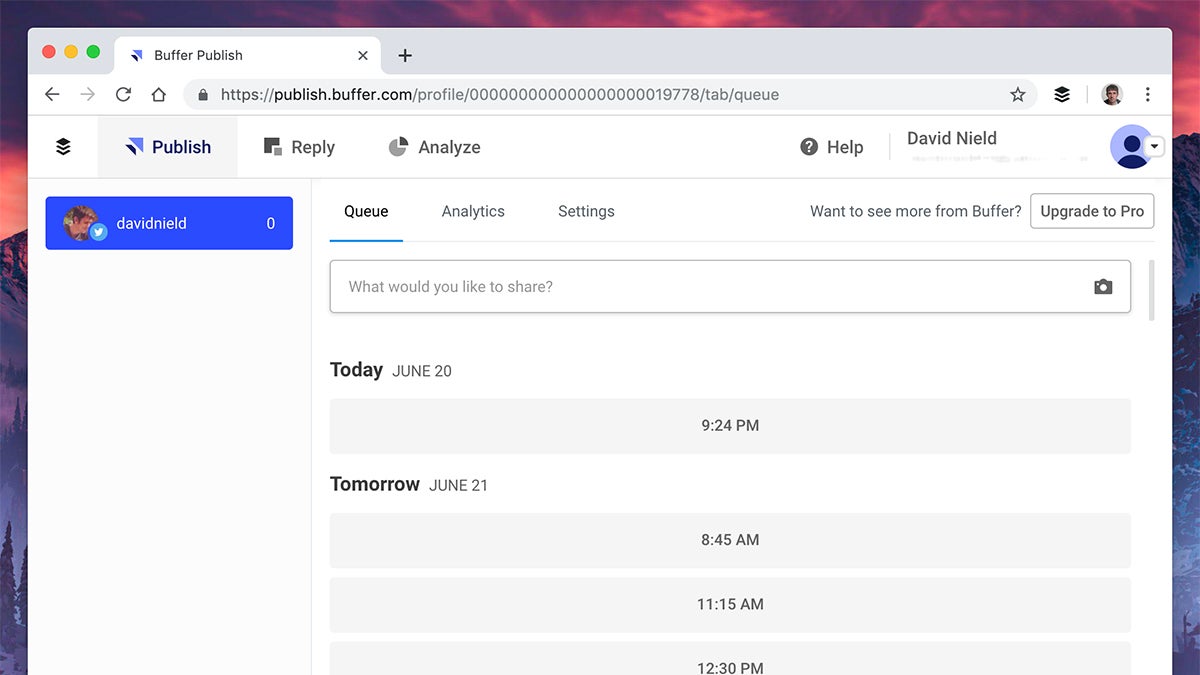 So, for example, you might want five tweets to go out on Wednesday and five on Thursday, or whatever it is. The app is available on the web, on mobile, and as a browser extension, so you’ve got plenty of choices for how to get at it too. You even get some neat analytics tools thrown in for good measure.

Buffer is by no means your only option. Hootsuite is definitely worth a look too, though it’s geared more towards social media managers than individual users—you can use it for free to post to Twitter on a schedule, if you stick to three social media accounts and a maximum of 30 queued posts at any one time. 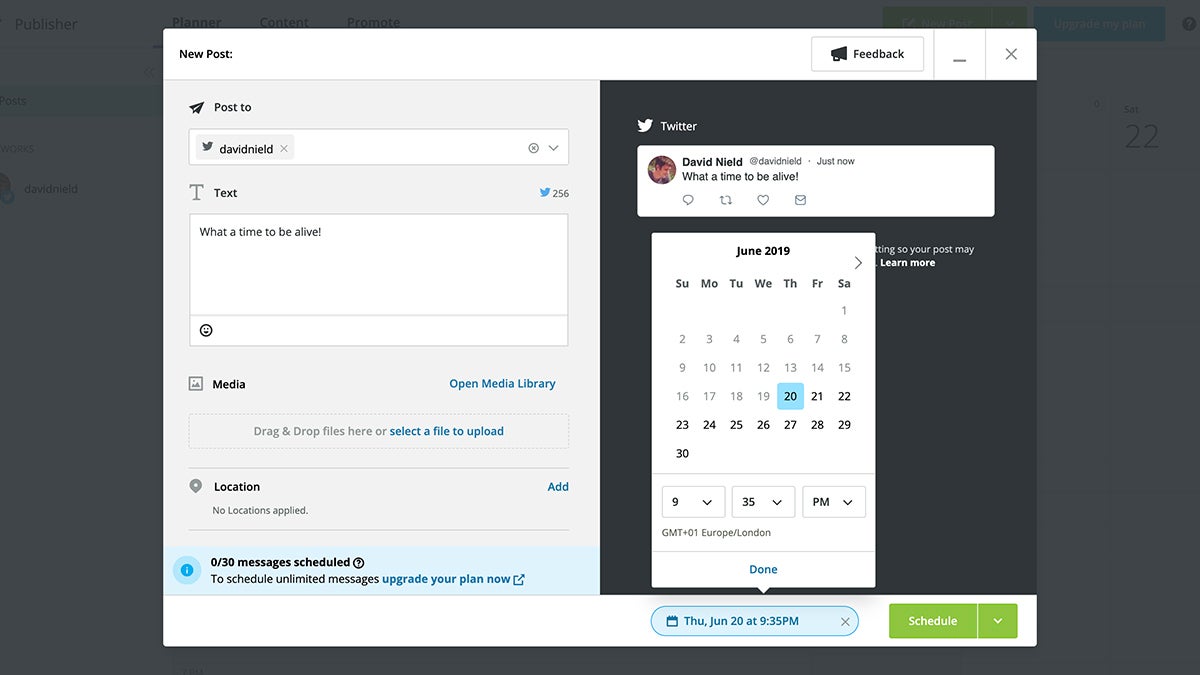 You get just as much control over your post schedules as Buffer offers, from being able to pick a specific date and time, to queueing up posts days in advance on a calendar. Mobile apps and browser extensions are available too.

And what of Instagram and Facebook? The bad news is you can’t schedule posts from these networks—either via a built-in option or a third-party tool—unless you’ve got registered business pages and accounts. For personal pages, you have to post to Facebook or Instagram as the mood takes you, or keep a draft ready for the right moment.