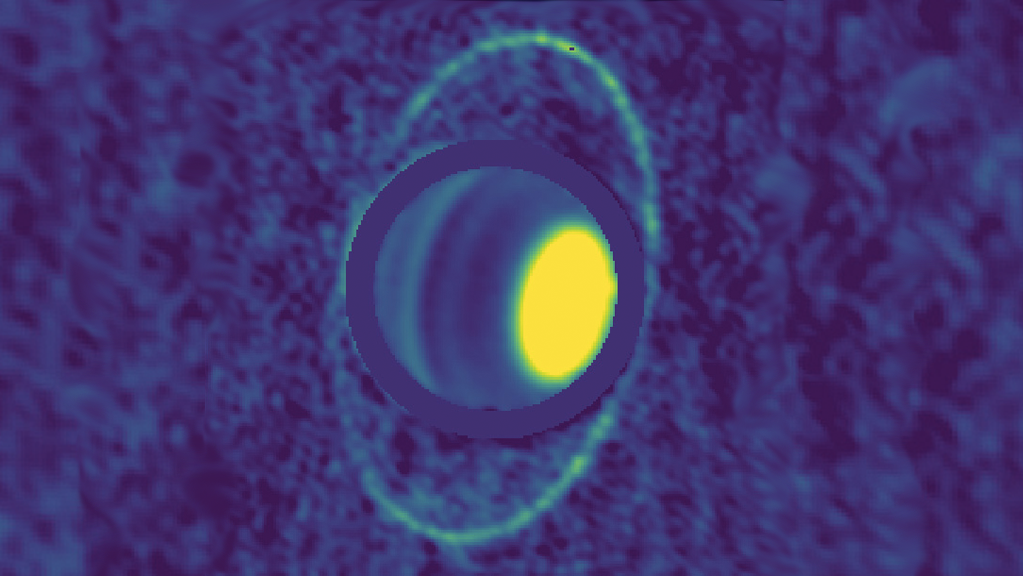 
Scientists have known for a few decades that the planet has faint rings, but there’s a whole lot that remains mysterious about them — the rings’ composition and mass, and the sizes of their individual pieces.

Researchers from the University of California, Berkeley and the University of Leicester in the United Kingdom used two telescopes in Chile to measure radiation from the pieces that comprise Uranus’ rings, the first observations of the rings in radio and mid-infrared wavelengths.

Prior to these observations, scientists have observed Uranus’ rings block the starlight behind them as seen from Earth and from the Voyager 2 probe, and have imaged them from the Hubble Space Telescope and using near-infrared telescopes on the ground.

These measurements demonstrated that the planet has 10 skinny rings, three fatter rings, and at least 13 small moons that orbit within the rings.

But the rings are small and dim; even the widest is only 20 to 100km wide, according to a UC Berkeley release. That’s far smaller than Saturn’s rings.

All of those previous measurements didn’t observe the rings directly; they’re based on the rings either blocking out other light or reflecting sunlight.

For this most recent study, researchers relied on observations of three different wavelengths of radio waves captured by the Atacama Large Millimetre/submillimeter Array (ALMA) of telescopes, as well as one wavelength of mid-infrared radiation detected by the Very Large Telescope (VLT)’s VISIR instrument, all in Chile. The rings emit nearly all of this radiation themselves.

The new observations allowed them to determine the temperature of the rings, which is a chilly 77 degrees above absolute zero, or -196C, according to the paper published in The Astronomical Journal.

The research also confirms a perhaps surprising hypothesis about Uranus’ brightest ring, based on observations from Voyager 2: That it’s composed of solely of particles that are centimetre-sized or larger, rather than microscopic dust.

“The small end is missing in the main rings of Uranus; the brightest ring, epsilon, is composed of golf ball-sized and larger rocks,” Imke de Pater, a UC Berkeley professor of astronomy, said in the press release.