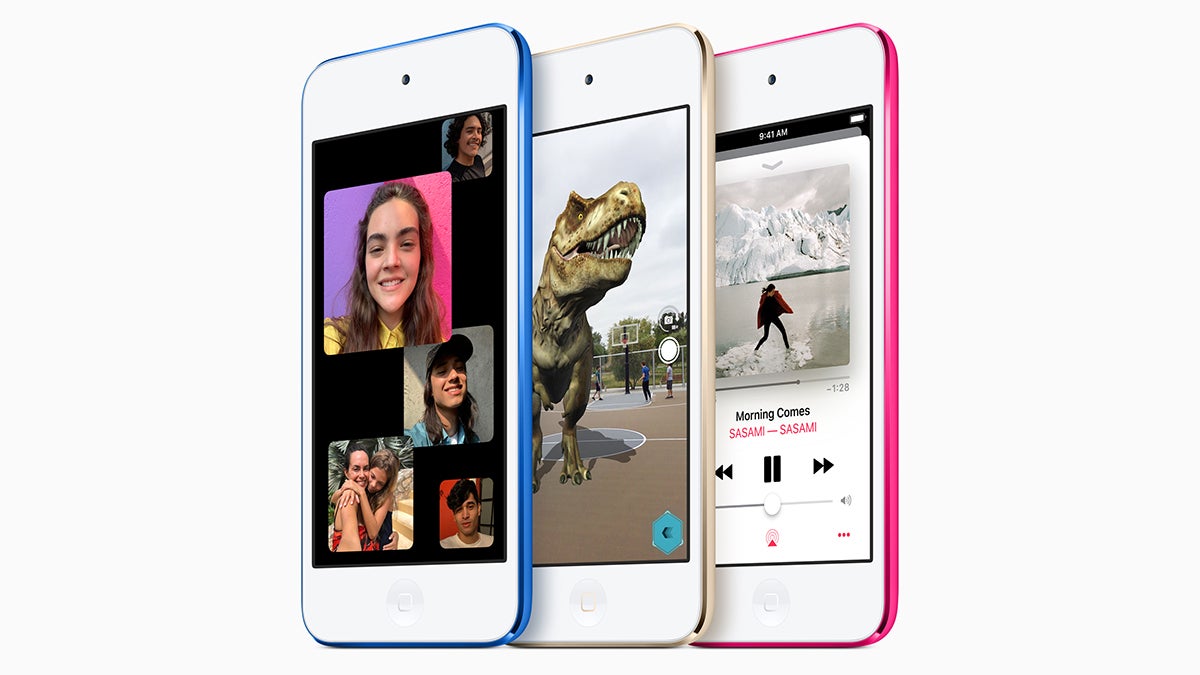 Hey—there’s a new iPod Touch in town, and it’s in line to get the latest iOS 13 upgrade later this year (dark mode and all). But why on earth would you want a hobbled iPhone? Apple wants to sell it to you because it’s committed to services like the App Store and TV+ and a cheap iOS device lets it get those services into the hands of more people.

But what about you? The person considering a phone-free universal media player in 2019. Most people could pick up a cheap Android phone for the cost of the iPod Touch. So what exactly is the point of the thing?

At this stage it looks like we’re not going to get a successor to the iPhone SE, so if you want relatively new-ish Apple hardware with a screen any smaller than 15cm, the 7th-generation iPod Touch is now your best bet.

The small size is going to be pocket-friendly, bag-friendly, and easier on your thumbs and fingers too. It’s not a phone, obviously, but when you’re on wifi at home or the office you might not notice the difference after you’ve loaded up the Touch with your favourite messaging apps (Group FaceTime is supported, unlike the 6th-gen model).

Sadly battery life doesn’t really benefit from the small screen and lack of cellular connectivity: Apple says it’ll manage 8 hours of video playback compared to the 14 hours of the iPhone XS. Still, it should get you through a long flight or road trip.

We’ve already written about how the iPod Touch can make sense from a privacy perspective, but in summary: That lack of cellular connectivity means the device isn’t constantly pinging network towers to tell your carrier where you are.

Whether you’re dealing with state secrets or just want to limit how much Apple, Google, and the other tech giants know about you, that’s worth considering. If the law comes knocking, you’re better protected, and there’s no cell number to hack.

All the usual reasons why you might need a separate communications device to your main phone—travelling across high-risk areas, working in any kind of activism, and so on—are reasons to think about getting an iPod Touch for some of your most private chats. Not everyone needs that level of security and privacy of course, but if you do, it’s an option.

Our smartphones can do just about anything now, but should they? Maybe it’s not the best idea to use your primary communications device as a media player and remote control and a smart home hub and an alarm clock and as the source for all your news.

The iPod Touch only connects to the web via wifi, so keep it at home in the living room as the ultimate remote control—control your smart lights, beam music to your HomePod, operate your Apple TV, queue up a Sonos playlist and so on.

It means your actual phone can breathe a little easier without hundreds of responsibilities. And it might mean you check your social media feeds a little less because you’re not always getting your phone out of your pocket. A shared device can also help families who all need access to the same smart home gadgets.

Games got a special mention in Apple’s iPod Touch announcement, and it’s easy to see why—it’s a great compact mobile gaming machine. That faster A10 Fusion chip that Apple has fitted here should handle games just fine, and it gives the iPod Touch the power it needs for AR experiences too (including Minecraft Earth).

With a broad range of accessories already available for previous iPods and the iPhones, it’s easy to upgrade your gaming experience with a controller add-on, saving you from having to cover up the screen with your fingers.

Apple Arcade is on the way as well, giving you even more options for gaming on the go—it’s going to appear as a separate tab in the App Store rather than a dedicated app, and for an as-yet-unannounced monthly subscription fee you’ll be able to enjoy all the Arcade games Apple can throw at you. One of the features of these subscription games is that they’ll all be playable offline, which will come in very handy on an iPod Touch.

One of the few changes ushered in with the 7th-generation iPod Touch is a new storage option: 256GB. That’s 256GB of music and movies that you don’t have to carry around on your iPhone (or Android phone), making the iPod Touch perfect for those long journeys or trips where cell reception might be at a premium.

With 1080p HD iTunes movies coming in around the 4-6GB mark depending on length, you’ve got enough space to stack dozens of them on an iPod Touch. As the device has full access to the iOS App Store as well, you can download files from the likes of Spotify, Netflix, and all those other music and video apps.

As an added bonus, the iPod Touch has a 3.5mm headphone jack as well, something you can’t say about the latest iPhones. You can carry on using your old wired headphones without having to look around for an adaptor every time.

6) A cheap iPhone alternative for kids

Positioning the iPod Touch as a kid’s gadget is nothing new, and it remains one of the biggest reasons to pick up the music player. Children too young to get a phone but craving some screen time? Get them an iPod Touch.

Speaking of Screen Time, the extra app controls that Apple introduced with iOS 12 mean you can take more control over what your kids can and can’t do on their brand new iPod Touch, and for how long. You’ll get a weekly report on what your offspring have been up to, and can restrict content based on age ratings as normal.

We’ve already talked about the iPod Touch’s offline capabilities (Apple Arcade, media downloads), and they mean that you don’t even have to connect the device to wifi if you don’t want to—another layer of protection for your kids.