Winter Movie Preview: The Movies To Watch Out For 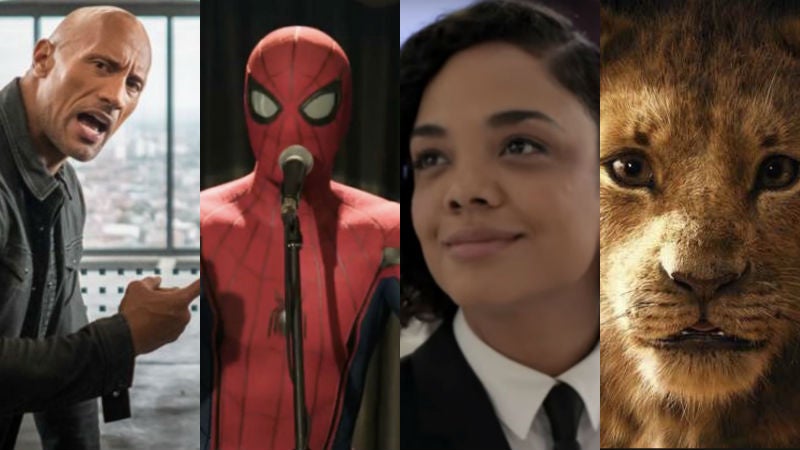 Dwayne Johnson, Spider-Man, Tessa Thompson and Simba are all sure to be heroes this winter. (Image: Universal, Sony, Disney)

It’s going to be a hell of a winter movie season.

Hollywood’s biggest season just got underway with the record-shattering release of Avengers: Endgame and Disney alone is following that up over the next few months with Aladdin, Toy Story 4, The Lion King, and Artemis Fowl, some of which are sure to be among the most popular films of the winter.

But that’s just the start. Pokémon, Godzilla, Chucky, John Wick, the Men in Black, Spider-Man, the Fast and the Furious, zombies, crocodiles, the Beatles and many more are all along for the ride. Seems to have a little something for everyone in 2019.

Below, here’s some info on 37 genre films you can’t miss this winter.

Even though it’s already in theatres if you’re talking the winter of 2019 you have to mention Endgame, a fantastic and massively successful (already) sequel to Avengers: Infinity War and culmination of 22 movies over 11 years. Click here for a ton of additional content.

One of the world’s most popular brands, Pokémon, finally gets the live-action Hollywood treatment fans have been waiting for. Ryan Reynolds voices the popular yellow creature Pikachu who teams up with a wannabe Pokémon trainer (Justice Smith) to find his missing father. Plus, fans of the video game series will get to see all their favourite characters populating an entirely new world blending humans and pokemon together. (May 10)

Keanu Reeves is back (with his dog) for some more arse-kicking as assassin-on-the-run John Wick. If you’ve seen the first two films you probably know the drill by now and are up for more outlandish and creative fight scenes. The returning Ian McShane and Laurence Fishburne are joined by Halle Berry, Anjelica Huston, and Game of Thrones’ Jerome Flynn. (May 16)

Disney continues its live-action craze with Aladdin. Directed by Guy Ritchie (Sherlock Holmes, King Arthur: Legend of the Sword), this version stars Mena Massoud and Naomi Scott as Aladdin, the streetrat who summons the powers of a magic lamp and Princess Jasmine (Naomi Scott). And, of course, there’s Will Smith as the Genie. That image will be haunting us forever. (May 23)

So, like, what if Superman, but evil? That’s the general premise behind Brightburn, the James Gunn-produced horror project about a superpowered child from the stars (Jackson A. Dunn) who crash-lands on Earth. His adoptive parents, played by Elizabeth Banks and David Denman, try to get him to use his powers for good…but the forces of evil are just too tempting, and he eventually becomes humankind’s greatest threat. Gunn suggests it’s the perfect Memorial Day movie, for what it’s worth. (May 23)

The things that have always set Toho’s Godzilla films apart from their Hollywood counterparts is the abiding reverence the films’ humans have for the kaiju and the deep mythos that situates Godzilla in a larger pantheon of awe-inspiring beasts. King of the Monsters is poised to show Godzilla and the other kaiju in their full glory, battling it out for global domination as the world’s population of humans are helpless to do much else other than watch in wonder and pray they survive the war. (May 30)

Fox’s X-Men cinematic universe is coming to an end, but not before Xavier and his student body face off against one of their own who’s finally fulfilling her destiny of becoming more powerful and dangerous than any of them could have imagined. Of course, this isn’t the first time we’ve seen the Dark Phoenix Saga adapted to the big screen, but unlike in X-Men: The Last Stand, Jean’s set to take center stage this time around in a story that’s wholly about her fall from greatness and descent into cosmic madness. (June 6)

The moment you leave your pets at home, you’re not consigning them to a few hours of unsupervised time alone, you’re giving them a chance to be their truest selves—the one they keep hidden when you’re around and bothering them with new outfits for that mildly-profitable Instagram sponsorship you’re hustling. In The Secret Life of Pets, Max, the Jack Russell terrier finds himself becoming overly protective of his family’s new baby and realising that when babies start growing up, they’re meant to leave the house, meaning he’s gotta tag along to make sure that everyone stays safe. (June 20)

The man who wrote The Hobbit and Lord of the Rings, J.R.R. Tolkien, gets his very own biopic starring Nicholas Hoult and Lily Collins. Tolkien’s genius will be brought to life by blending his real-world experiences, like at school and at war, with his imaginary fantasy elements that would eventually spawn an entire fandom and become one of the most well-recognised brands in the world. (June 13)

Tessa Thompson and Chris Hemsworth, two people known for cutting sharp figures in businesswear, do what they do best in Men In Black International, which is play off of one another’s excellent comedic sensibilities all while kicking arse and looking damned good doing in. When the MiB is infiltrated by shape-shifting aliens with plans to topple the organisation, hotshot Agent H teams up with newcomer Agent M to investigate a series of globe-spanning incidents that, if left unchecked, could result in the destruction of the world. (June 13)

Between the in-the-works Syfy TV series from original film creator Don Mancini, and this unrelated cinematic reboot, it’s a good time to be a Chucky fan, The film stars Aubrey Plaza as an unfortunate mum who buys her son a “Buddi” doll, which comes equipped with face-scanning smart technology and, of course, homicidal urges.

To be totally honest, we were kinda so-so on this movie until the news dropped that Mark Hamill would be voicing the sinister toy; no disrespect to Brad Dourif, but we can’t wait to hear what he does with the character. (June 20)

Can you believe it’s been nine years since we last checked in with Woody, Buzz, and the gang (in a theatre)? The latest entry in the beloved Pixar franchise looks poised to enchant fans old and new with a tale that sees the toys taking a road trip with Bonnie’s family and exploring the outside world. Fan favourite Bo Peep returns for the first time since 1999’s Toy Story 2, and there’ll be a crafty new character, Forky, who needs a bit of help embracing his true toy identity. (June 20)

June 2019’s second cursed-doll movie is the third film to explore the porcelain-faced menace first introduced in The Conjuring—but it’s the first Annabelle movie to feature Conjuring stars Patrick Wilson and Vera Farmiga, who reprise their roles as demon hunters Ed and Lorraine Warren. This instalment will see Annabelle taking her place behind a locked door in the Warrens’ haunted-object collection, but rest assured she’ll still be spreading plenty of evil around. (June 28)

Instead of a James Bond movie, we’re getting this Richard Curtis-scripted fantasy from director Danny Boyle instead, about a musician (Himesh Patel) who wakes up after an accident in a world that seems exactly the same…except that nobody has heard of the Beatles. Can you blame a struggling artist for appropriating a musical legacy that never existed? And will there be any consequences beyond Ed Sheeran suggesting “Hey Jude” be re-titled “Hey Dude”? (June 27)

How on earth does the Marvel Cinematic Universe pick itself up again after the incredible, audacious saga that is Avengers: Endgame? By sending Peter Parker (Tom Holland) on a summer vacation all across Europe with his school pals. Spider-Man: Far From Home isn’t all rest and relaxation though—when a bunch of elemental bad guys start showing up to cause havoc, Peter finds himself recruited by Nick Fury (Samuel L. Jackson) himself to work alongside the, err, mysterious new superhero about town, Mysterio (Jake Gyllenhaal). Can Peter balance great power, great responsibility, and a great vacation? We’ll find out! (July 1)

Stop us if you’ve heard this one before, but Disney’s taking one of its animated ‘90s classics and giving it a slick, CG-enhanced coat of paint this year. Jon Favreau returns fresh off having done pretty much exactly the same thing to The Jungle Book to bring us a new version of Hamlet, but with lions. Young Simba (played by both JD McCrary and Donald Glover) finds himself thrust into the uneasy position of reclaiming the leadership of Pride Rock when his father Mufasa (the returning James Earl Jones) finds himself betrayed by his brother, Scar (Chiwetel Ejiofor)—setting the little lion on a quest that…well, you saw in 1994. At least Beyoncé is in this one? (July 17)

The Fast and Furious series has spent its time rapidly growing into one of the wildest blockbuster sagas around, but it’s reaching a whole new level with this new spinoff saga based around Dwayne Johnson and Jason Statham’s characters from the long-running car-racing-based super-franchise.

Now it’s actually going full-on superhero, as Hobbs (Johnson) and Shaw (Statham) find themselves forced to work together to stop the evil, genetically enhanced supersoldier Brixton (Idris Elba) from unleashing a bioweapon on the world. How will Hobbs and Shaw stop a man who literally calls himself “Black Superman?” With fancy cars, among other things, presumably. (August 1)

Will we finally get to see Josh Boone’s horror take on the X-Men franchise or will Disney postpone this one even longer and drop it on their new streaming service? Either way, we’re still keen to see Game of Thrones’ Maisie Williams and Glass’ Anya Taylor-Joy as mutants. Stranger Things’ Charlie Heaton also stars in this film about…well, they’ve been through a lot of reshoots, we’re not really sure anymore. That’s ok, the actors don’t know either. (August 1)