What If Doctor Who's Audio Adventures Were Planned Like They Were Being Made For TV?

James Whitbrook
May 30, 2019, 6:00am
Share Tweet
The Doctor and Donna are off on new adventures—and they’ve brought along some familiar faces. (Image: Big Finish)

Listening to a Doctor Who story as an audio drama and sitting down on a Saturday night (or Sunday, depending on the season!) to watch an episode of the show are very different things. But while the mediums are both different avenues of storytelling, one thing can help bring both to life: storyboarding.

To celebrate the arrival of Big Finish’s third volume of audio adventures with David Tennant’s Tenth Doctor—this time re-uniting him not just with Catherine Tate as Donna Noble, but also Bernard Cribbins and Jacqueline King as Wilfred Mott and Donna’s mother Sylvia, respectively—io9 has an exclusive behind-the-scenes look at some of the bonus features that come with the deluxe edition collection of the three new tales.

Set during the fourth season of the revived era of Doctor Who, James Goss’ “No Place,” Jenny T. Colgan’s “One Mile Down,” and Roy Gill’s “The Creeping Death” see the Doctor and Donna face familiar threats like the Judoon as well as all-new monsters, like a sinister creature lurking in the great smogs of ‘50s London. The Tenth Doctor Adventures Volume 3 is jam-packed with chills and thrills, just as you’d expect out of any Doctor Who story. But listeners only ever get to hear those aforementioned chills and thrills, as actors speak their lines and mimic as if they’re actually running down corridors and fighting monsters from the comfort of a recording booth. The “seeing” of each adventure is left to their imagination.

But to celebrate the 20th anniversary of Big Finish’s Doctor Who line this year, the company asked VFX supervisor Mike Tucker—whose Doctor Who work stretches across both the classic and revived periods of the show—to actually whip up storyboards for each of the Doctor and Donna’s new adventures as if they were being planned for filming like an episode of the show, to be included as part of a special book in the new collection’s deluxe edition. Check out an exclusive sample of some of Mike’s storyboards below, as well as some insight from the man himself about the process: 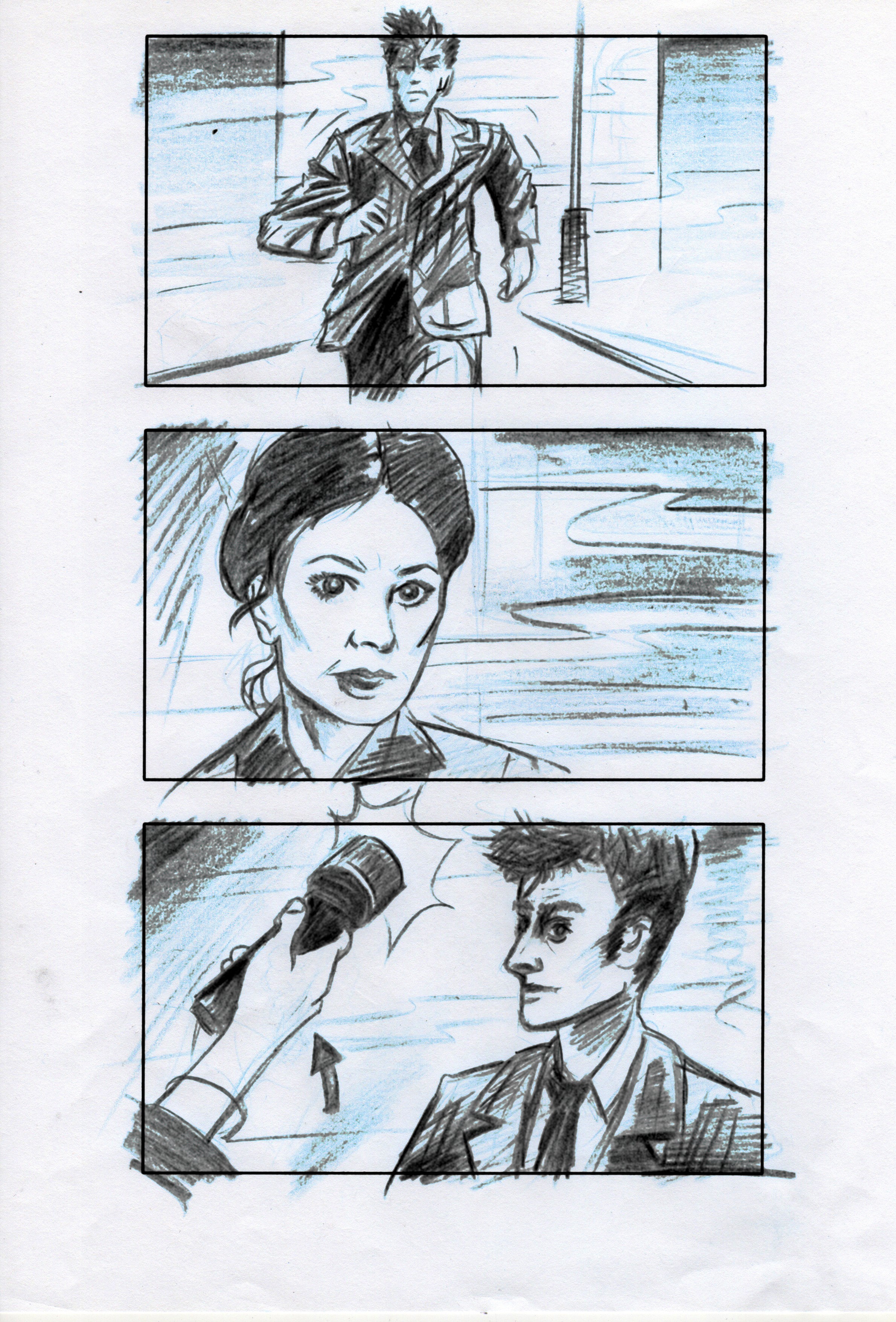 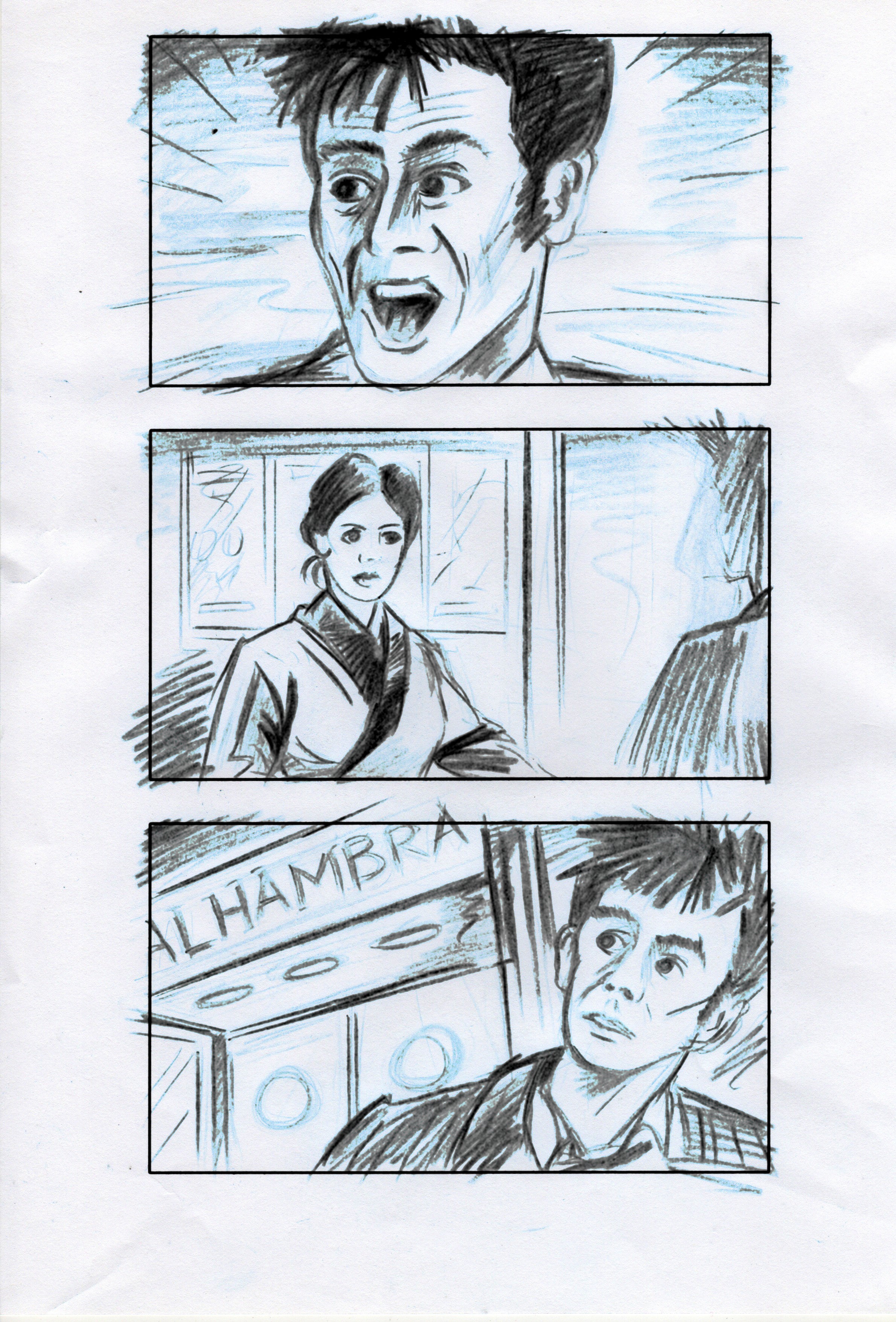 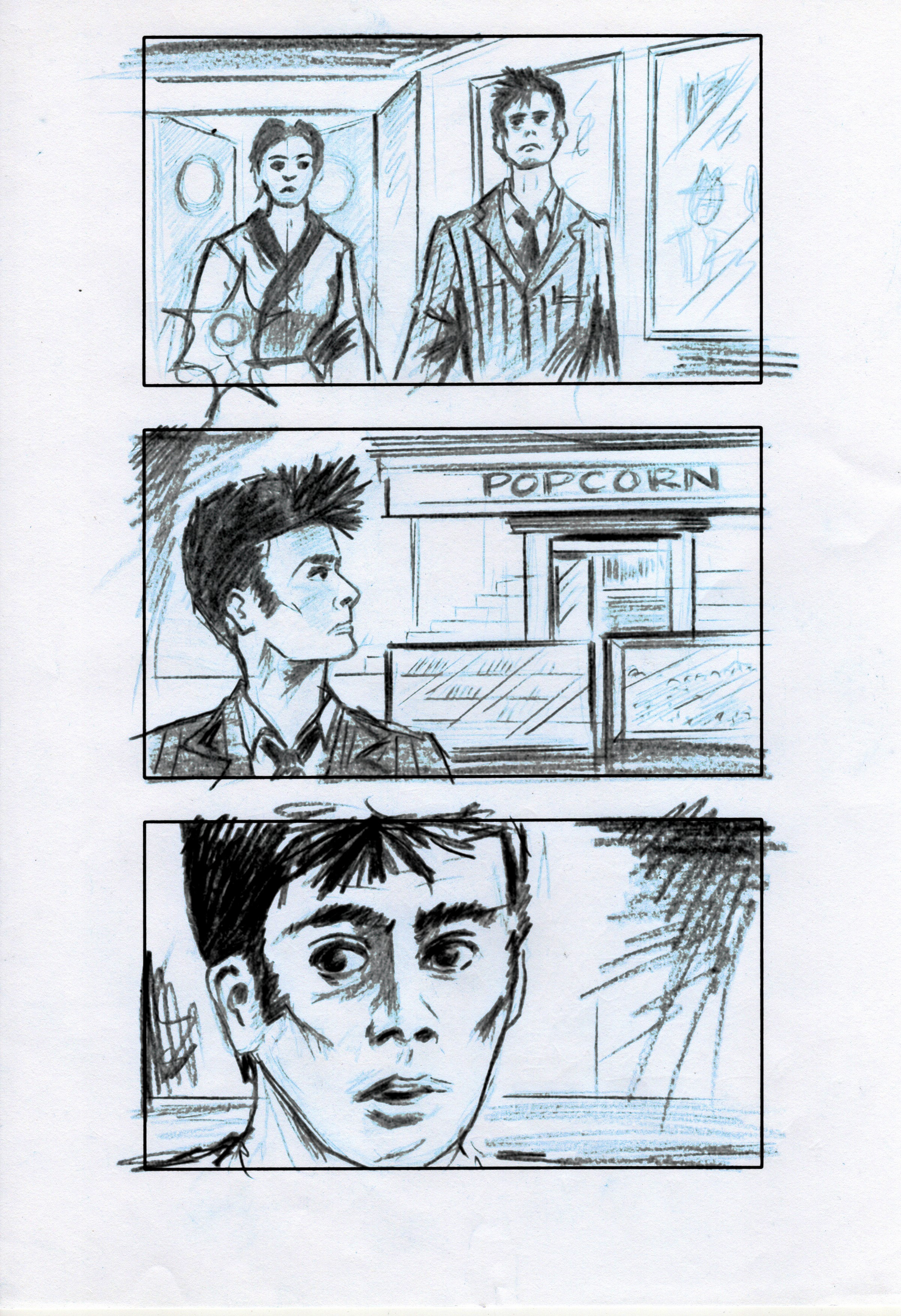 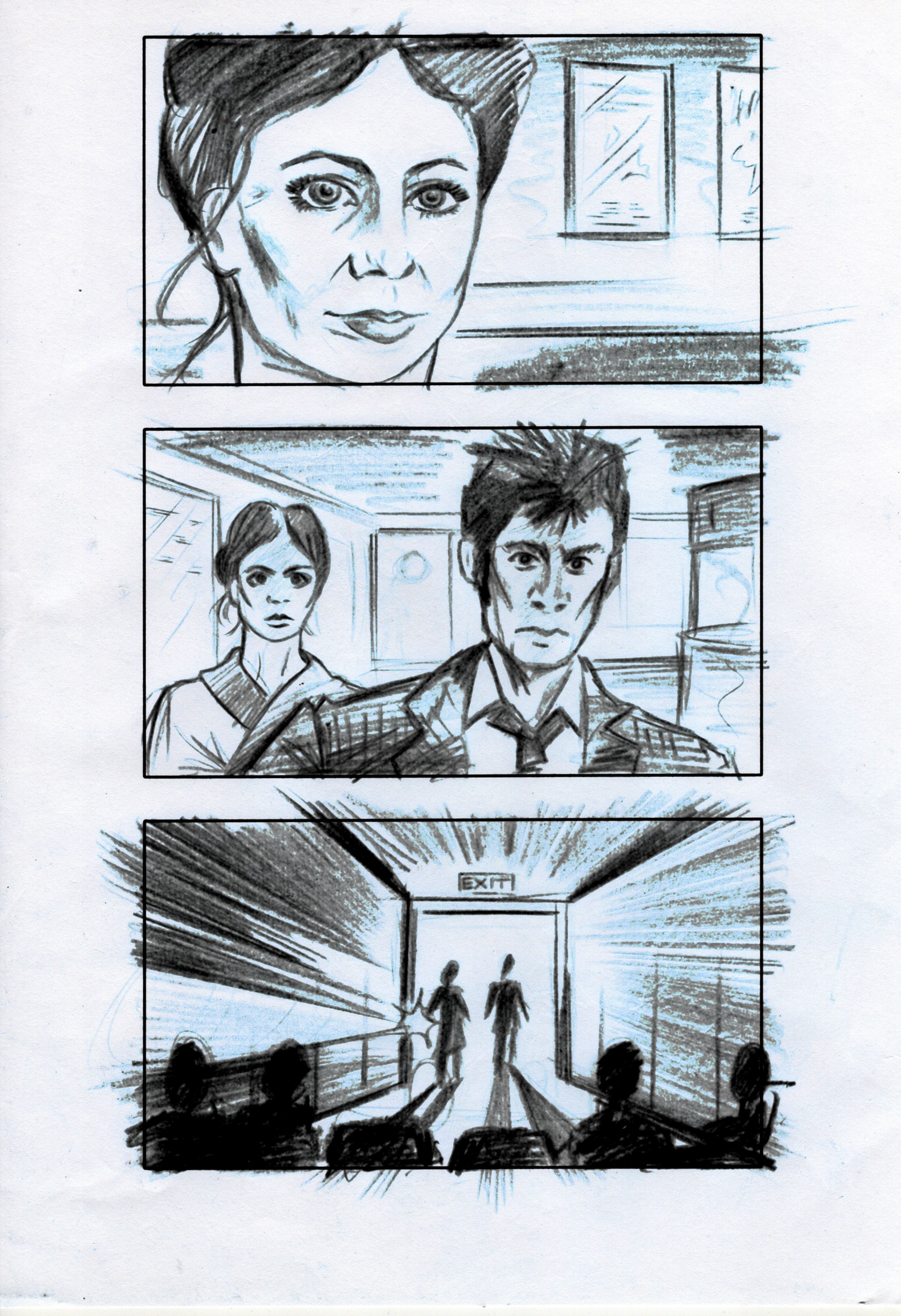 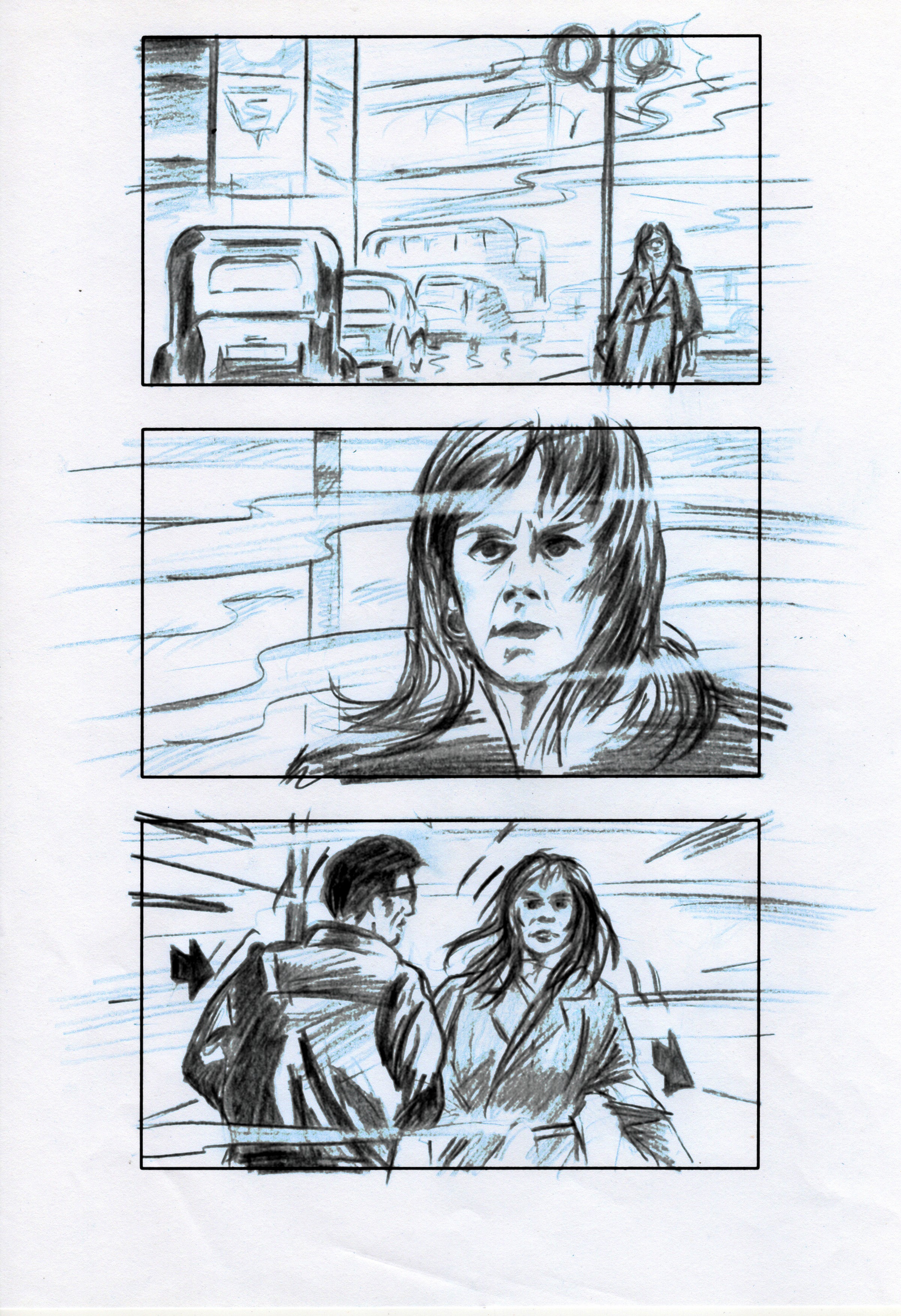 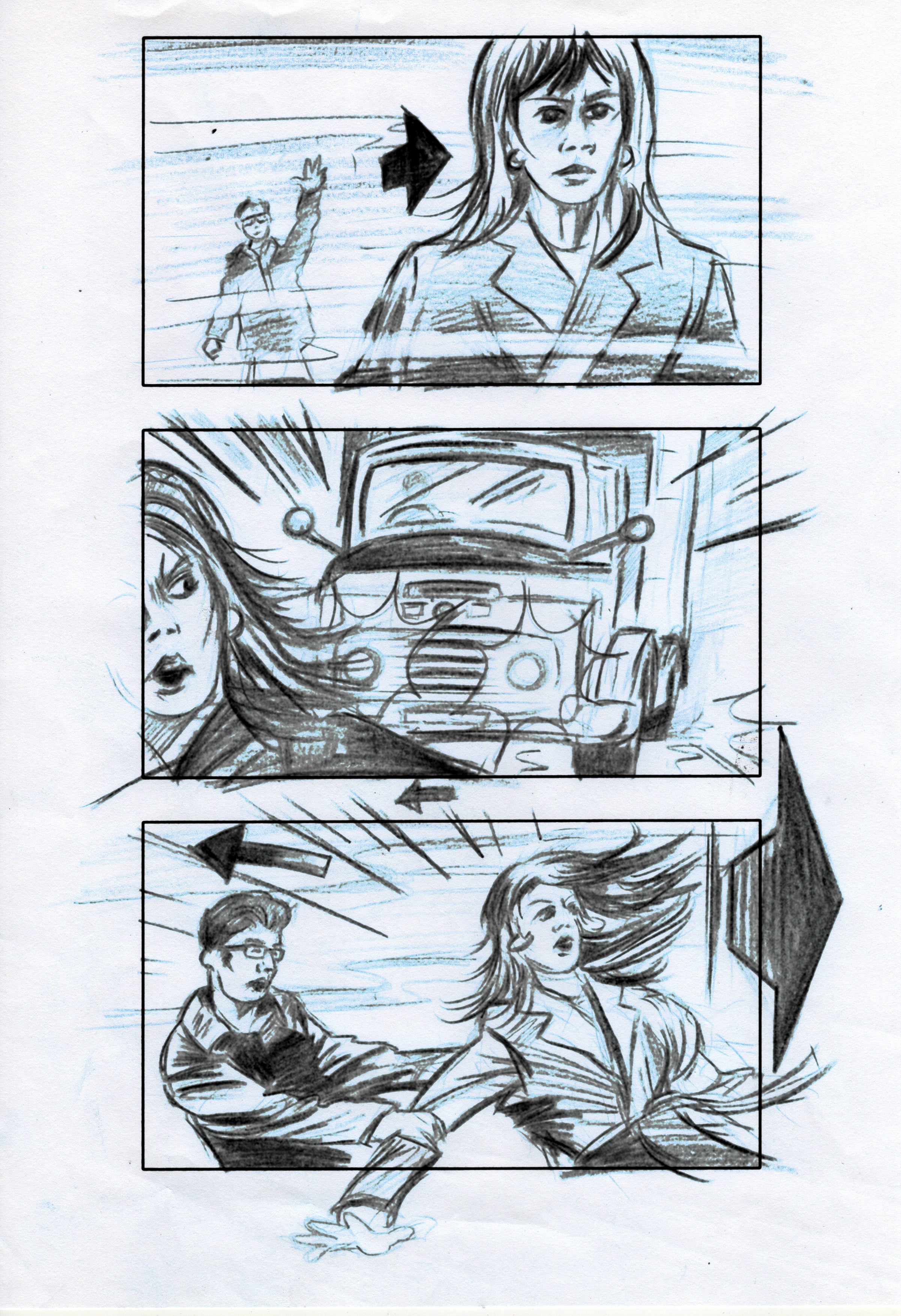 Storyboards are a vital part of television production – a visual interpretation of the script informing the crew of the director’s intent. During my time at the BBC VFX dept, storyboards were essential in showing the production what the miniature effects team was intending to shoot, as inevitably the main unit director and director of photography would not be present at the model shoot.

Although storyboards can often be crude, I was always a huge fan of the boards done by effects designer Ian Scoones—huge sheets of A1 card covered with meticulously detailed full colour paintings. His storyboards for “City of Death” and “Invisible Enemy” in particular are beautiful pieces of art in their own right, and I consider myself very fortunate to have some of them hanging on my walls. Storyboards for James Goss’ “No Place” 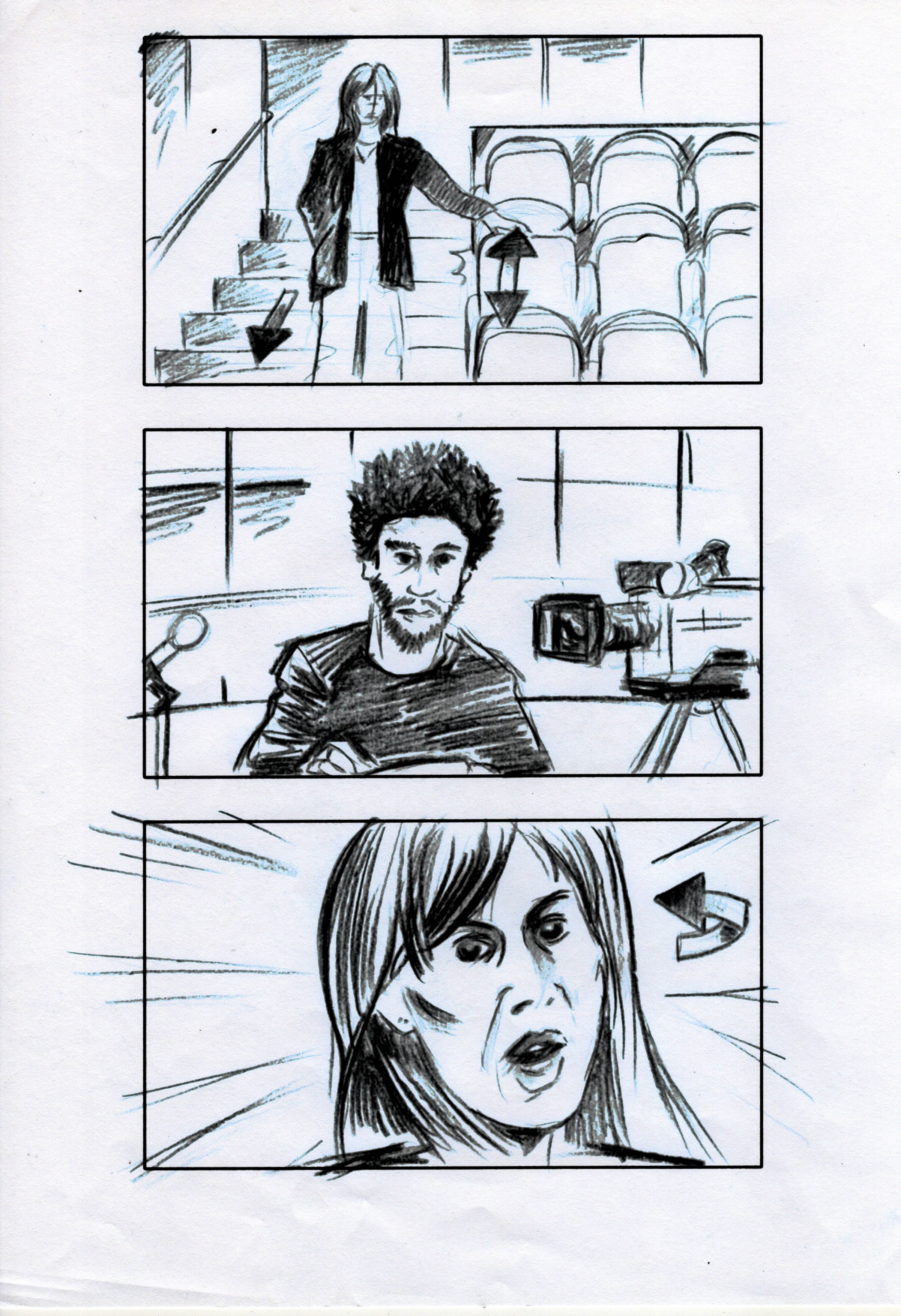 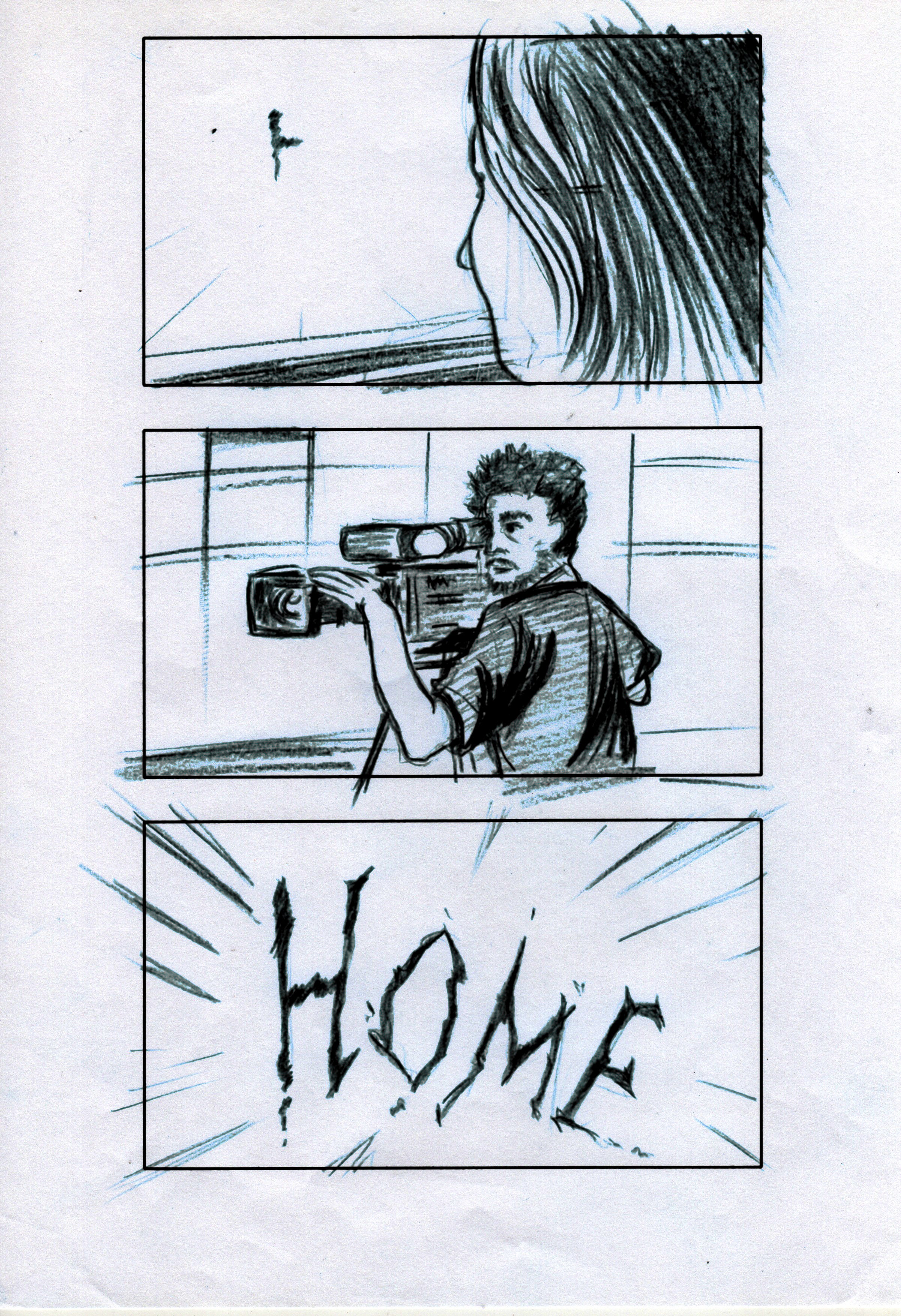 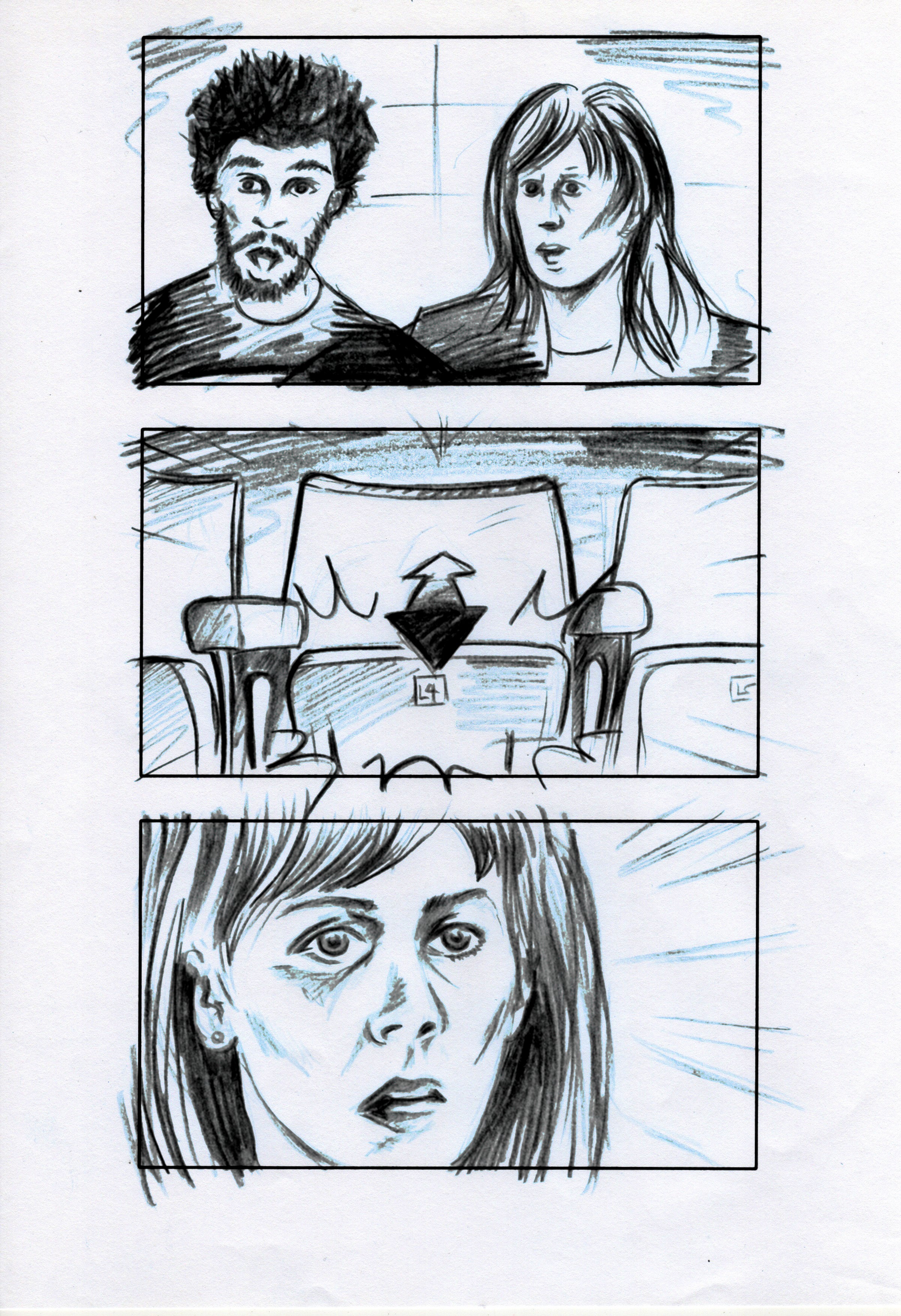 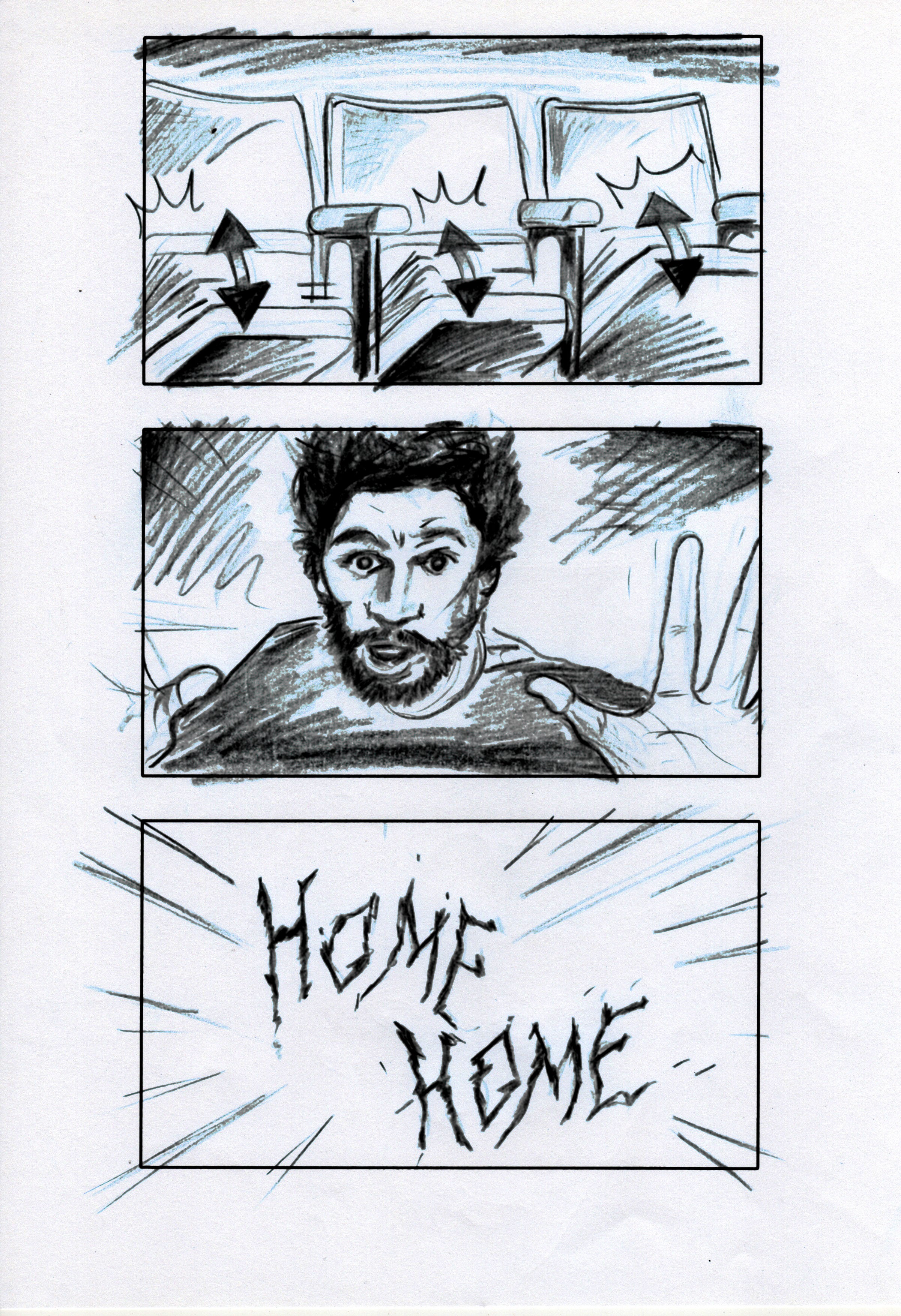 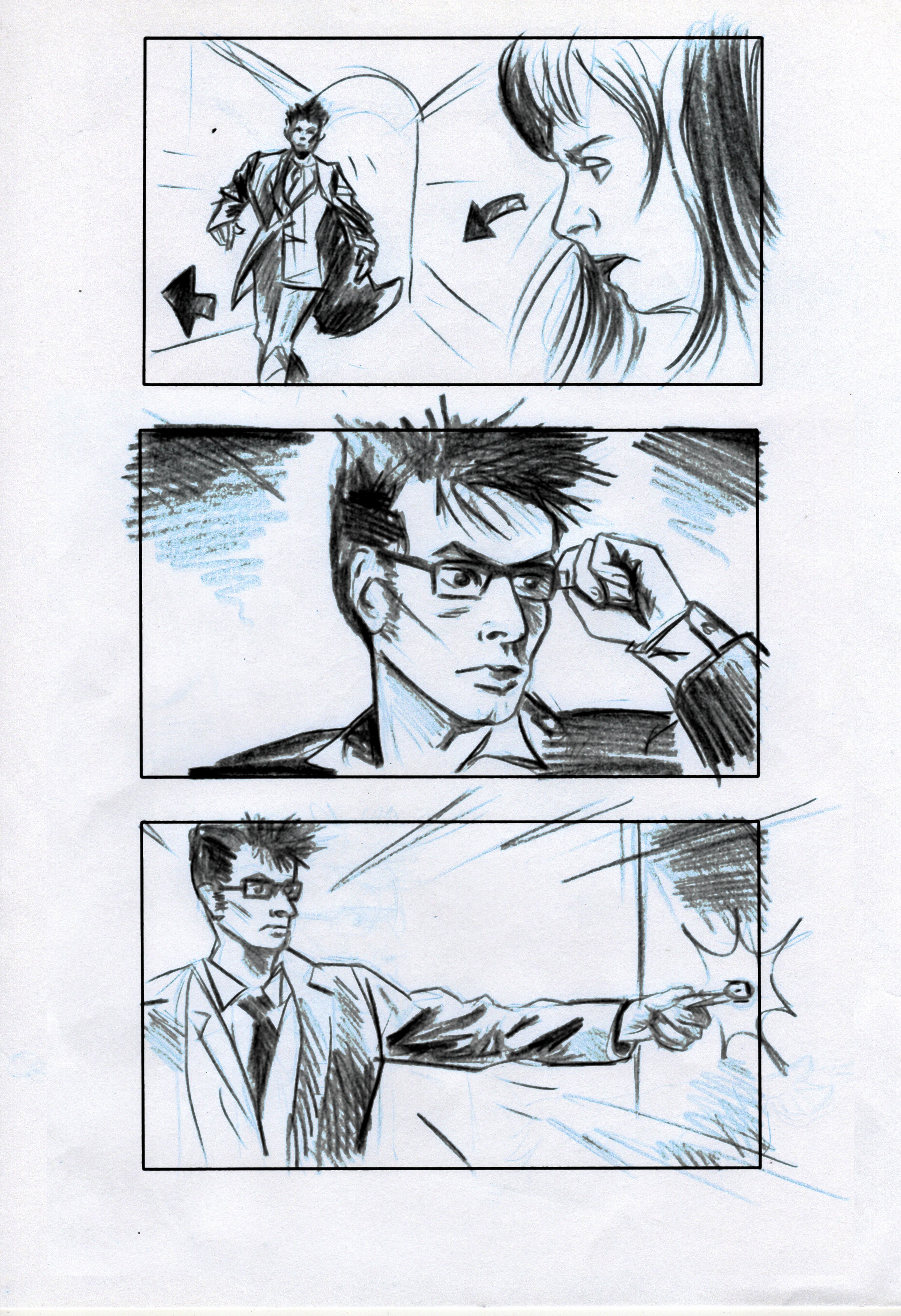 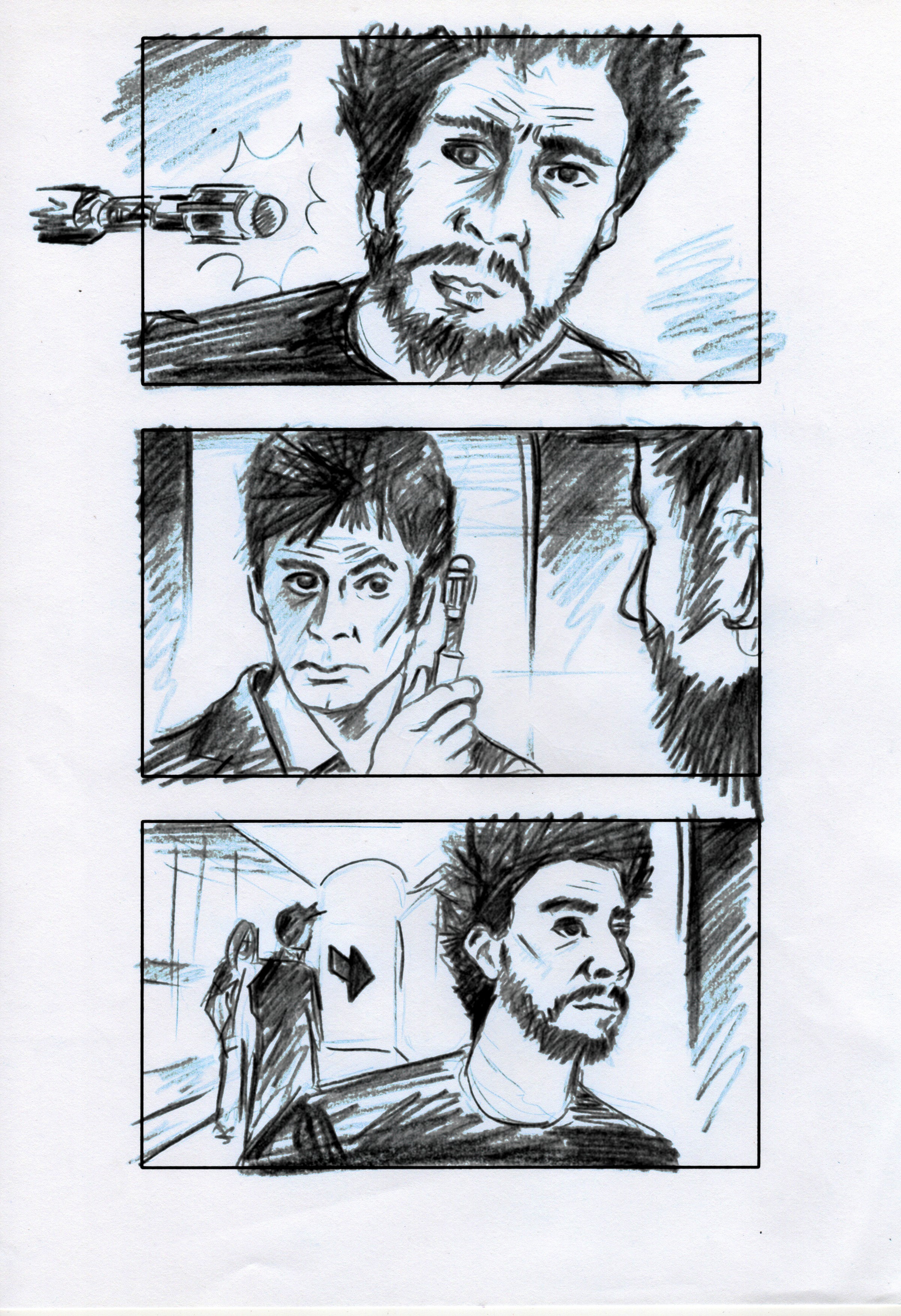 As Doctor Who (and indeed television in general) has evolved, storyboarding has become its own department with talented artists like Mike Collins, Anthony Williams and James Iles producing literally hundreds of drawings for each episode. I’ve always done my own storyboards for my effects sequences although timescales have meant that I’ve never achieved anything that even approached the level of detail that Ian Scoones managed.

The work that I’ve done for the new Big Finish Tenth Doctor box set has been a delight, allowing me work on sequences that would not normally fall into my somewhat specific domain. As I comment on in the sleeve notes, the boards are slightly unusual in that the nature of the production (i.e. audio) means that I virtually had to act as set and costume designer as well, there being no visual material for me to base my sketches on. The one thing I was able to pin down, however, was who had been cast, and wherever possible my storyboards feature likenesses of the actors who would be performing the roles. 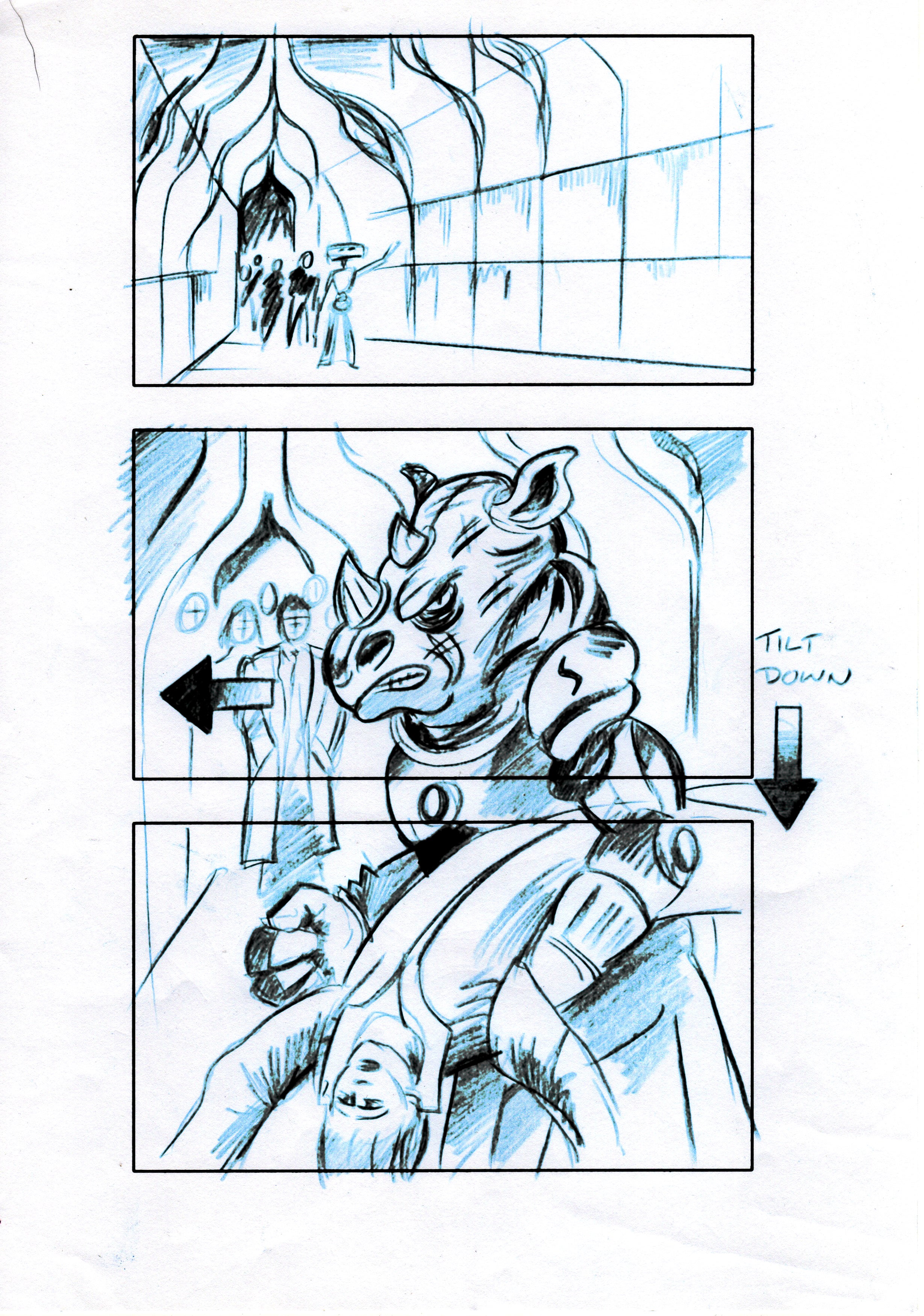 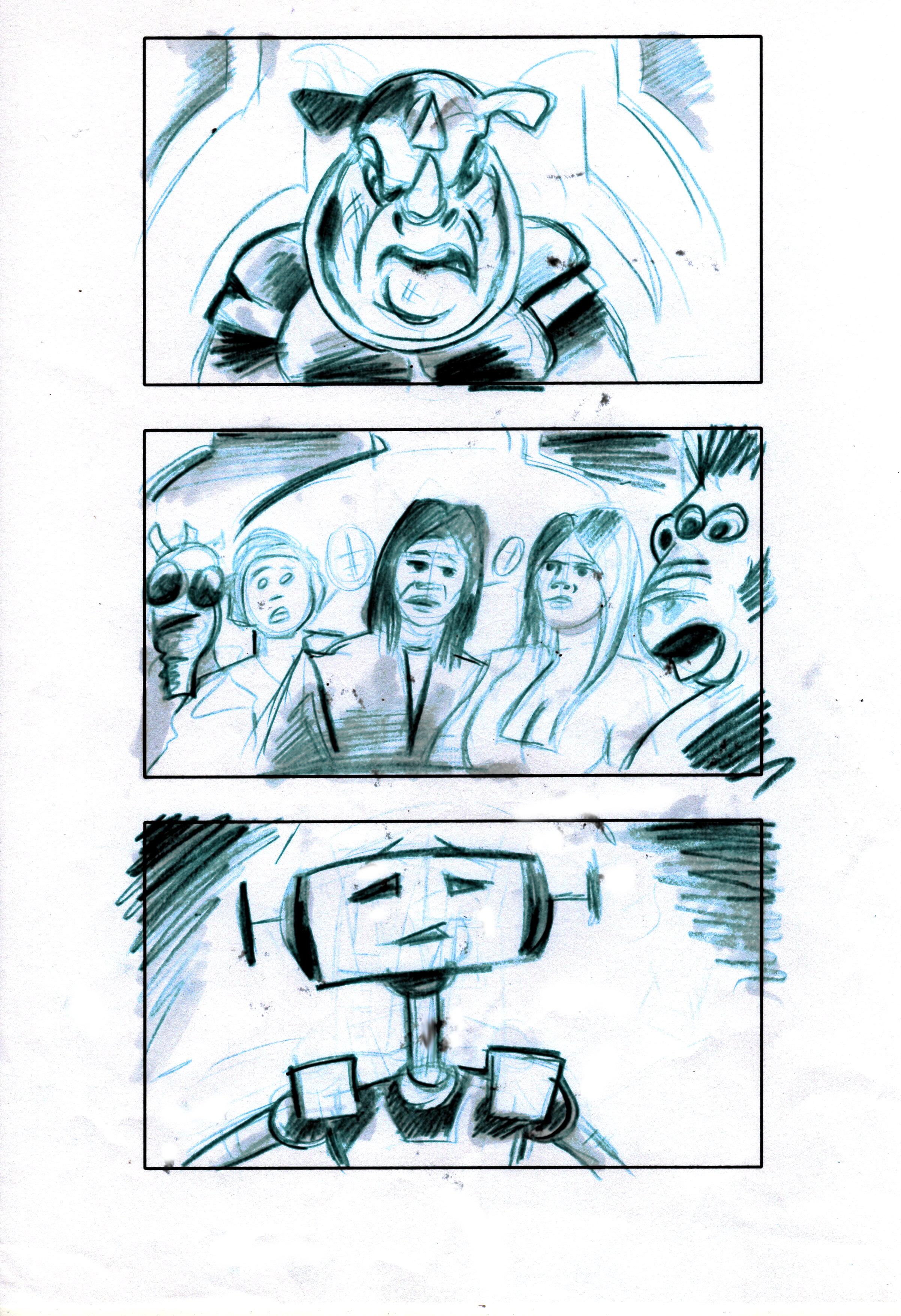 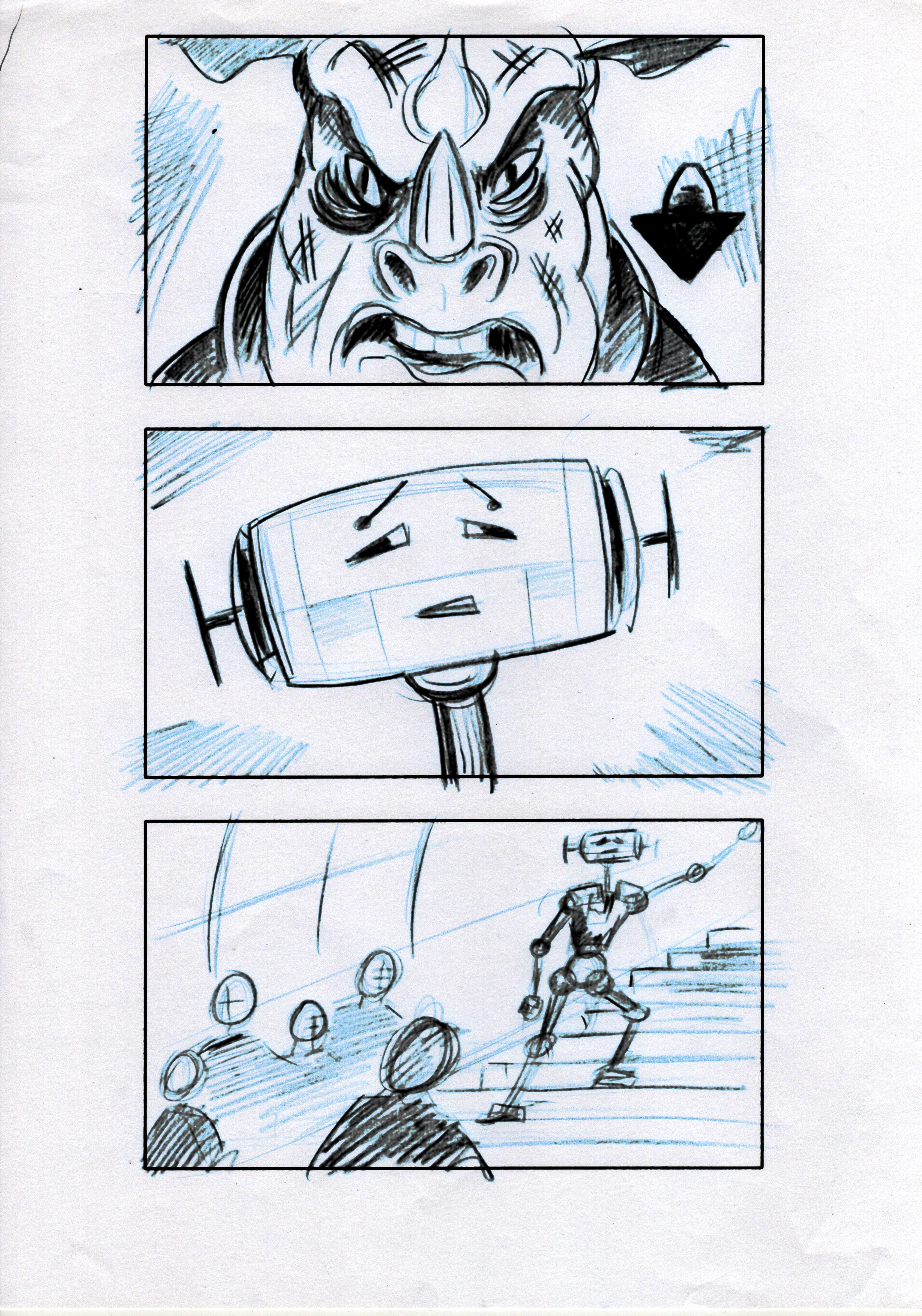 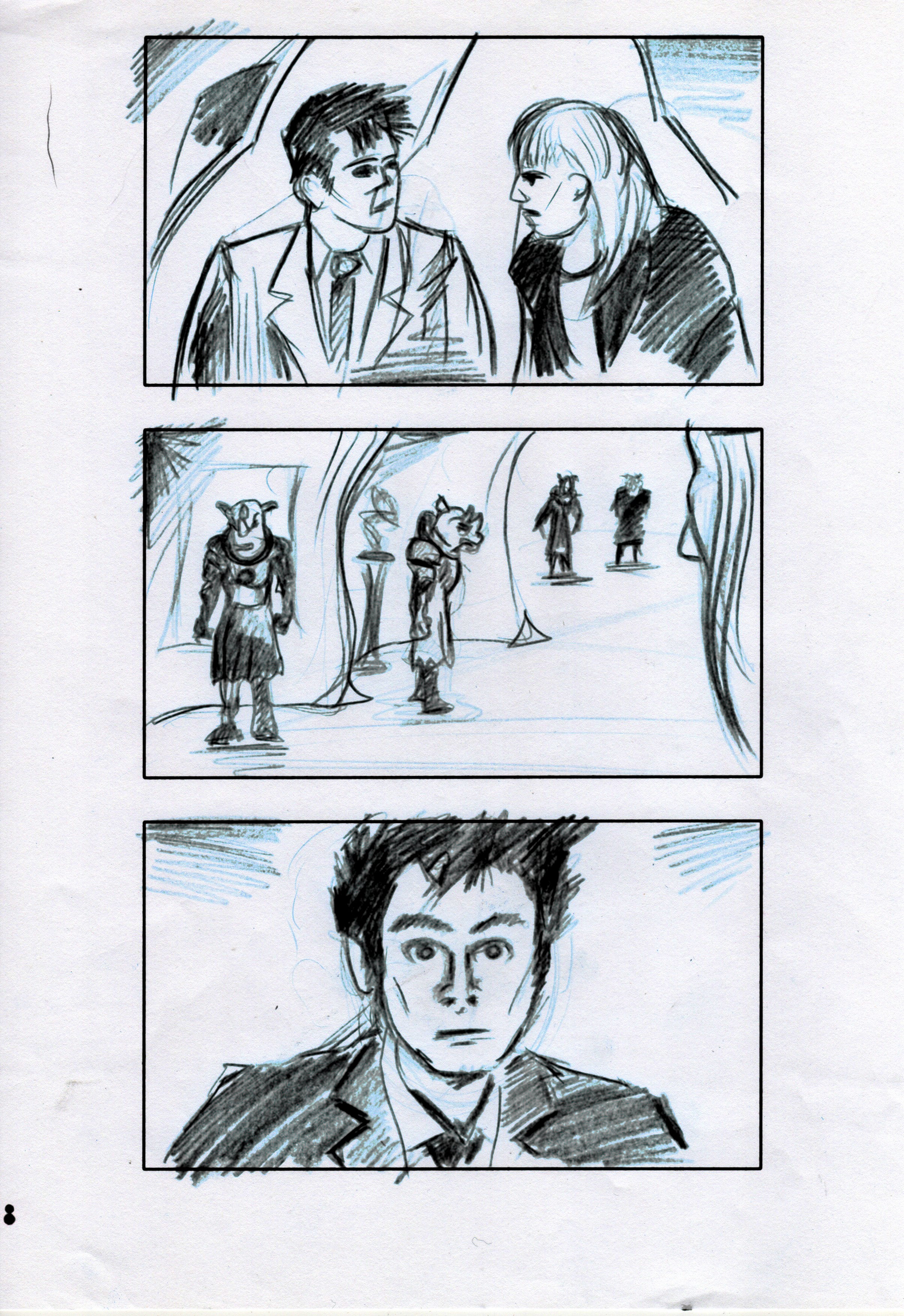 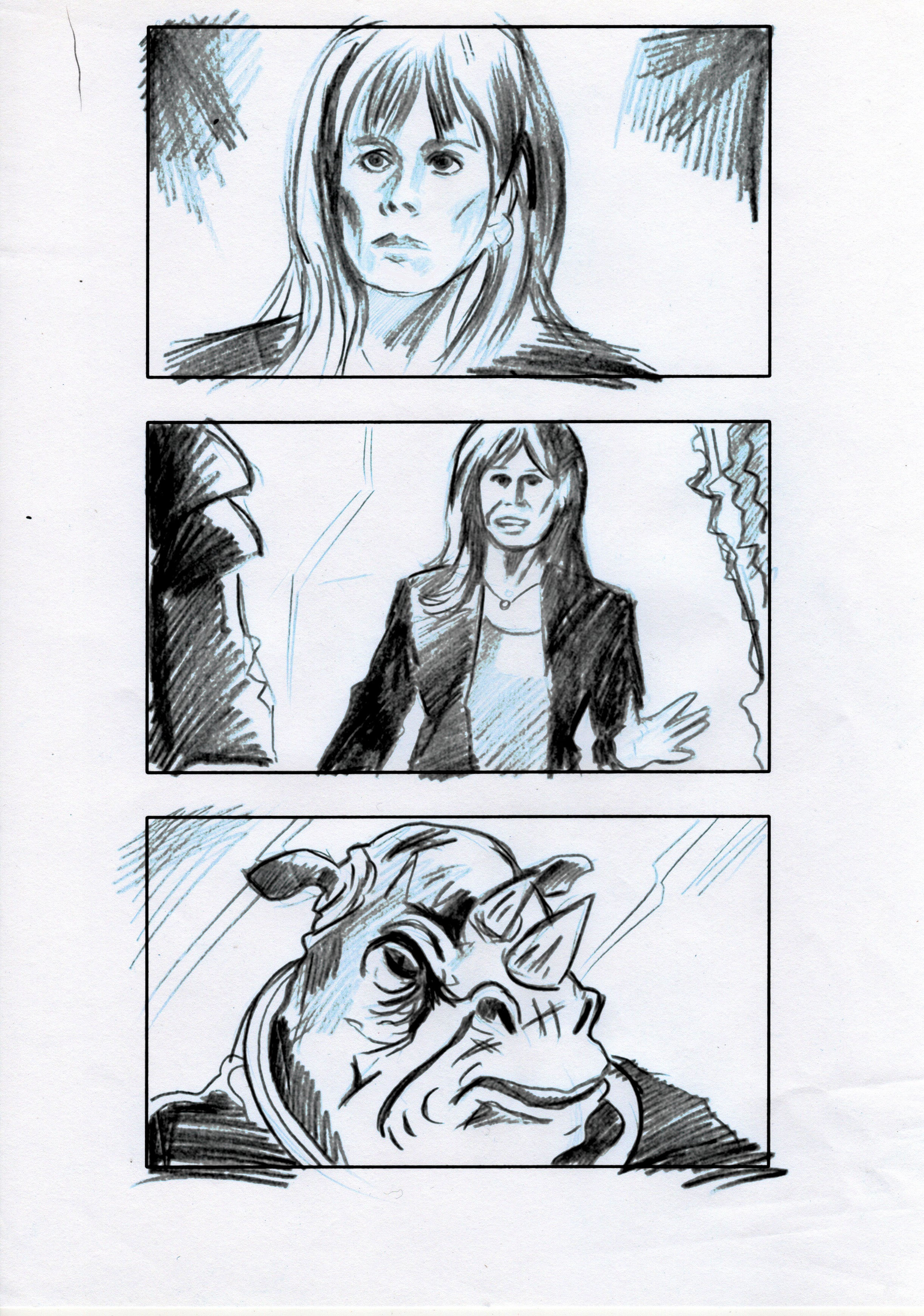 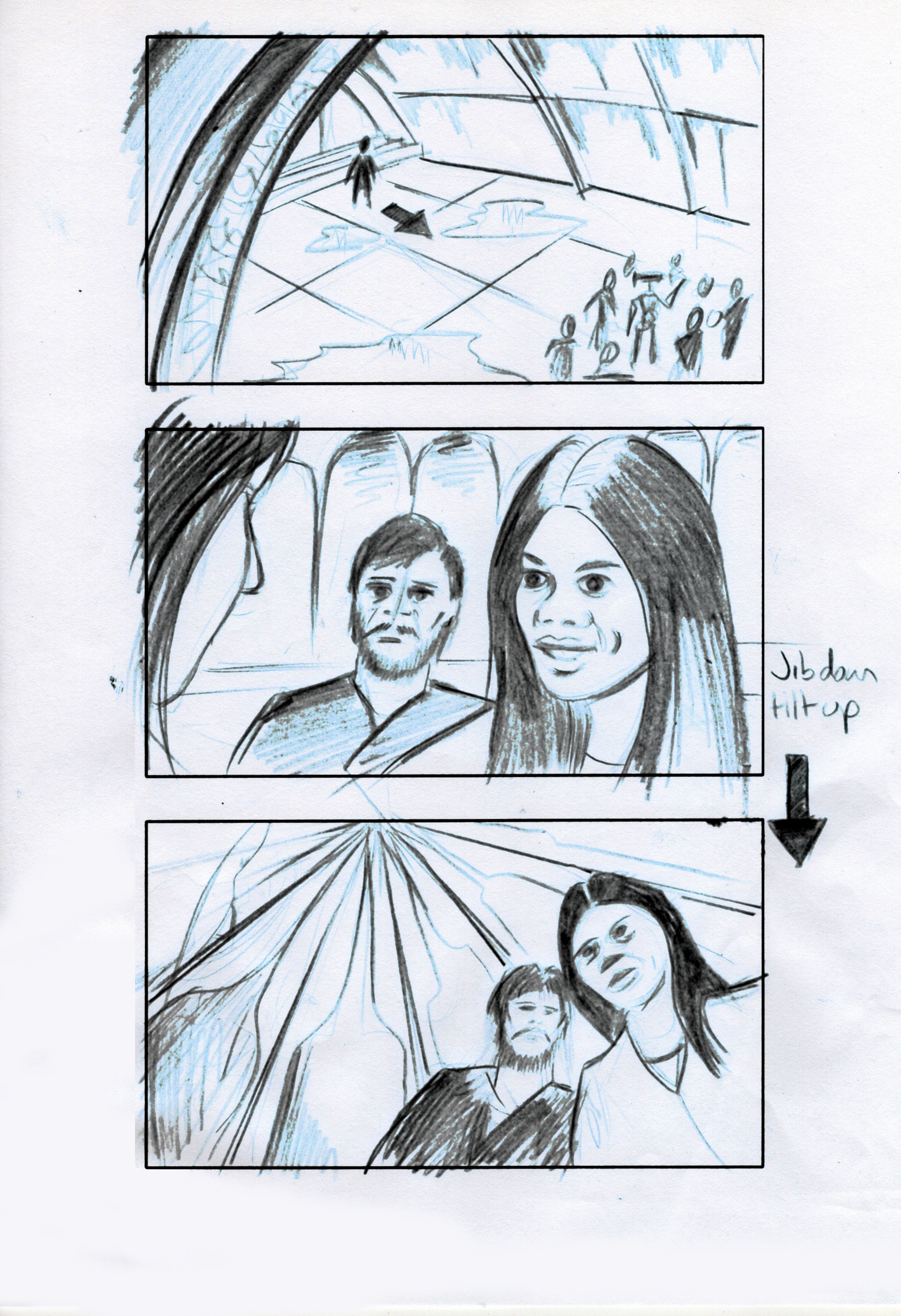 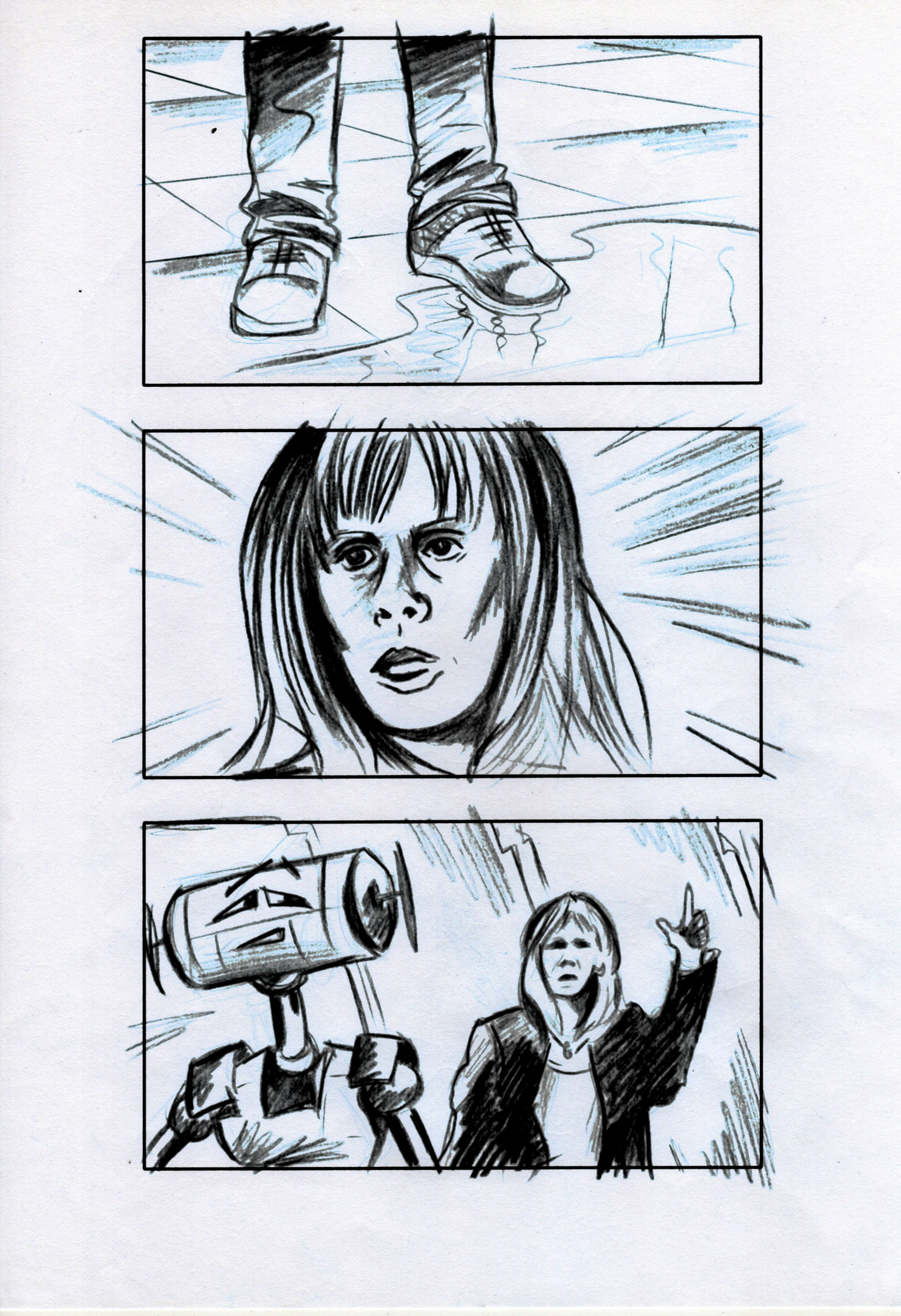 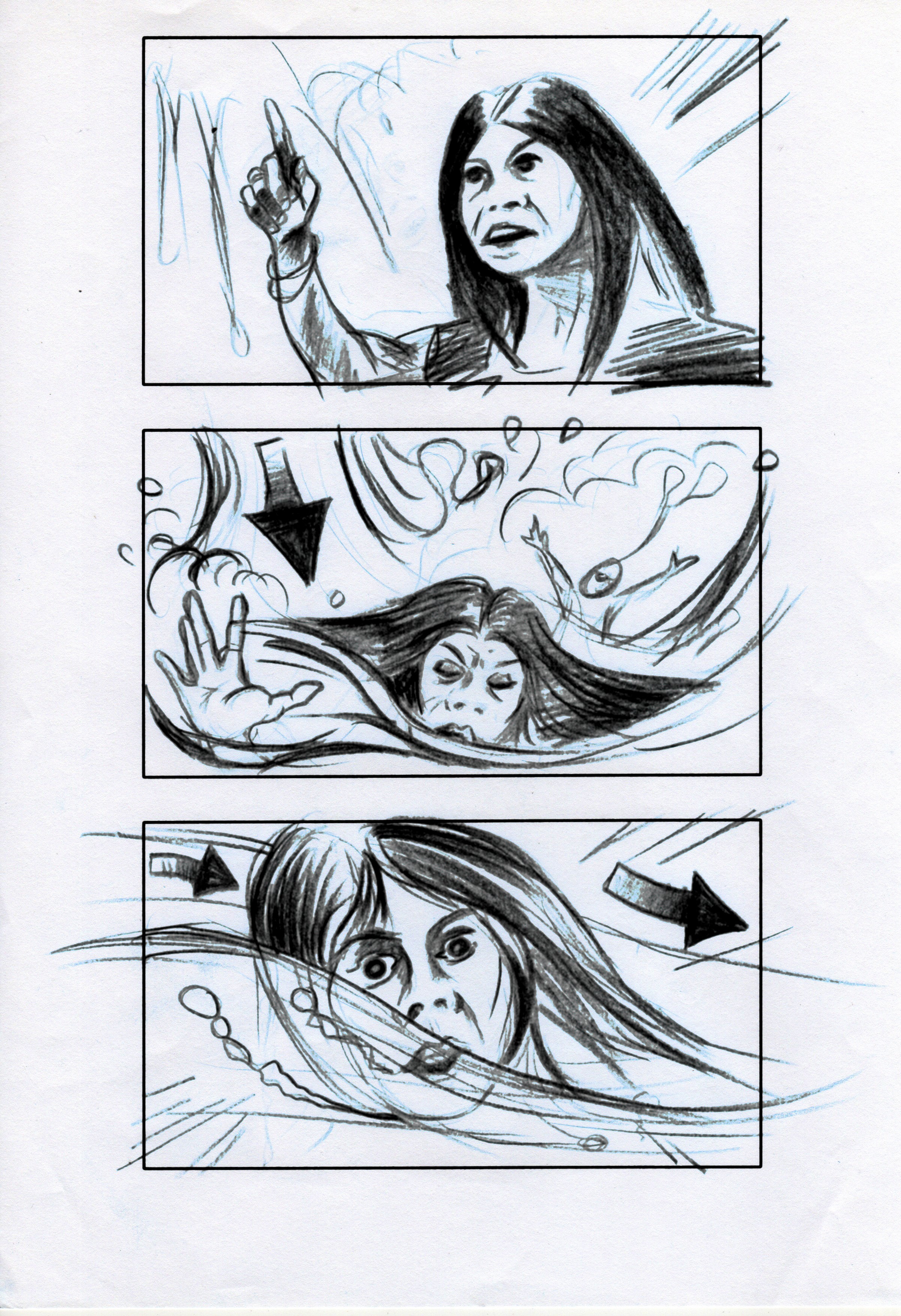 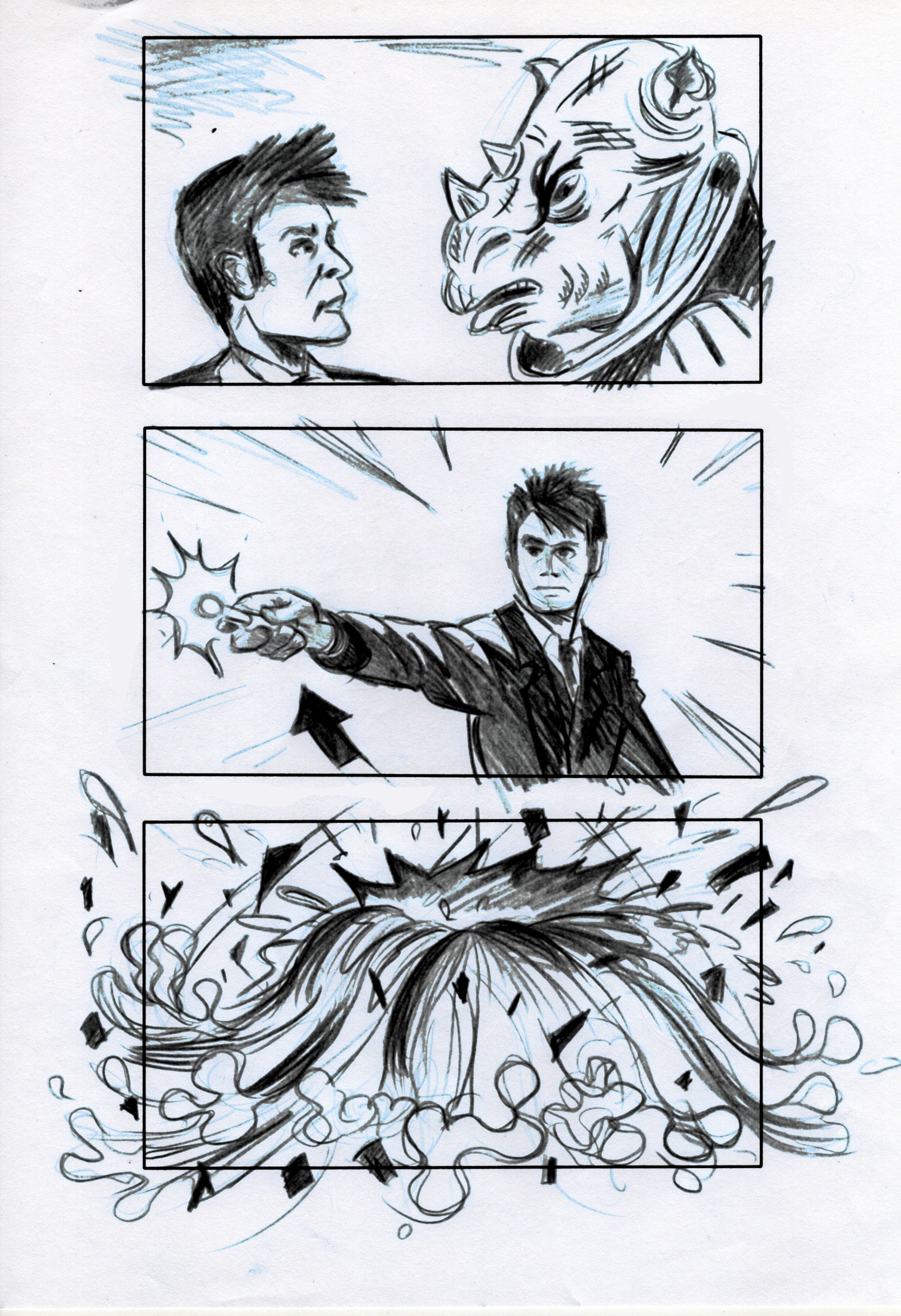 Whilst audio allows the listener to create their own version of what the story might ‘look’ like, I hope that the boards give an interesting alternative—a suggestion of what things might have looked like if the Doctor and Donna had been continuing their adventures on television.

Doctor Who: The Tenth Doctor Adventures Volume 3 is available to purchase digitally and on CD from Big Finish now.