Leatherman's New One-Handed Wonder Is All You Need

The memory of buying my first Leatherman is unusually clear in my head. I was 16, broke, and incredibly passionate about backpacking in the Smoky Mountains, where my family lived. That year, Leatherman announced a new multitool called the Wave, and the big deal feature was that some folks could open it with one hand, a trick I thought would impress my GORP-eating friends. So I saved up dishwashing money, scoured the dialup internet, and scored a used one on eBay. I loved that Leatherman Wave for over a decade. Never could open it one-handed very well.

Leatherman just released a completely redesigned multitool called the Free P4. The company sent me one for review, boasting about how this“revolutionary magnetic architecture” and “an all-new elastometer” allows for “epic haptics” in a device that Leatherman considers to be “the most advanced multipurpose tool ever made.” I didn’t care about all that marketing jargon. I just wanted to see if I could open this bad boy with one hand. And I did, with a shocking level of grace and ease, the first time I took it out of the case. 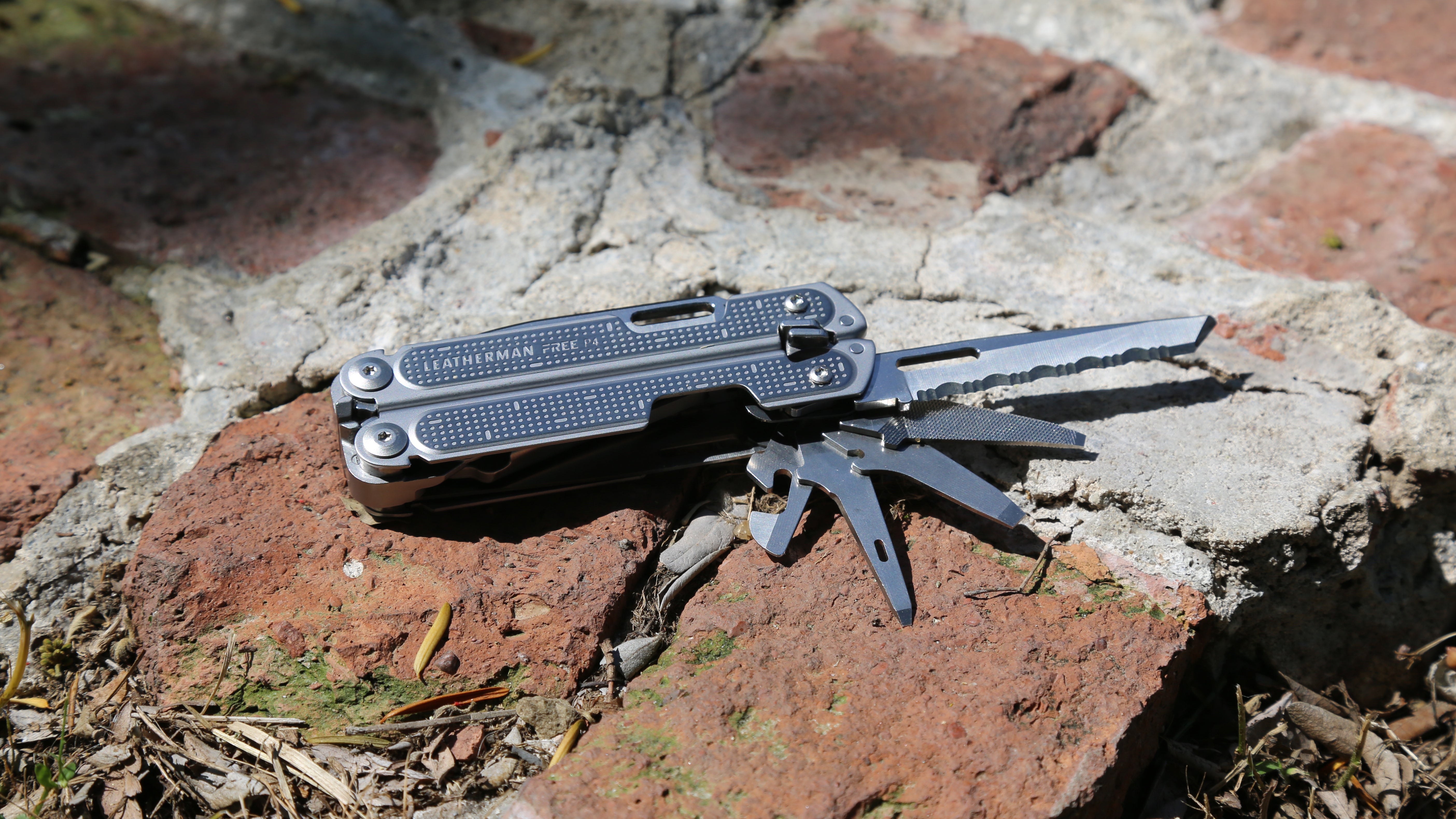 Easy to open, pleasure to use

Spendy for a souped up set of pliers

After spending a few weeks with it, I will admit that the new $340 Leatherman Free P4 is a marvel of a gadget. All that talk about magnets made immediate sense to me the first time I opened the multitool—with one hand, by the way—because the pliers swing open with ease and then snap back together. Everything snaps, actually. The knife snaps out and locks into place. The saw snaps and locks. Even the Phillips-head screwdriver with a cute little ruler on its side offers that secure-sounding snap when you engage it. “Epic haptics” is a dorky phrase to describe this, but the simple experience of pulling a tool out of the multitool is surprisingly satisfying on the Free P4.

What’s more extraordinary, however, is the extent to which you can do basically everything on the Free P4 without opening it up. This simply isn’t true of earlier Leathermans. The original Wave tended to be a two-handed affair, if only because you needed to open the pliers to access all the tools. Leatherman later developed the OHT (“one-hand-operable”) that featured pliers that slid out one end of the device so that all of the other tools could open on the outside. Newer models, like Wave+ and the Signal offered a bit of in-between by offering blades and saws that opened out, while the smaller tools required you to open the plier handles to access them.

The Free P4, as the name is surely meant to imply, makes access all 21 of its tools even easier. The four big tools situated on the outside of the device—knife, serrated knife, saw, scissors—feature a handy grip so a sturdy push of the thumb will open them up. The smaller tools—can opener, awl, screwdrivers, etc.—are easily accessed by pushing on a ridge near the hinge that pops them all out. While it’s easy to see the designer’s intention, the ridge thing proved to be a different kind of annoying. With earlier Leathermans or a pocket knife, you might find that familiar fingernail groove on a tool that you’d try to snag in order to pull it out. The ridge design along the hinge is a different version of that but sometimes still required some fine motor movement to get a tool out of its resting place. 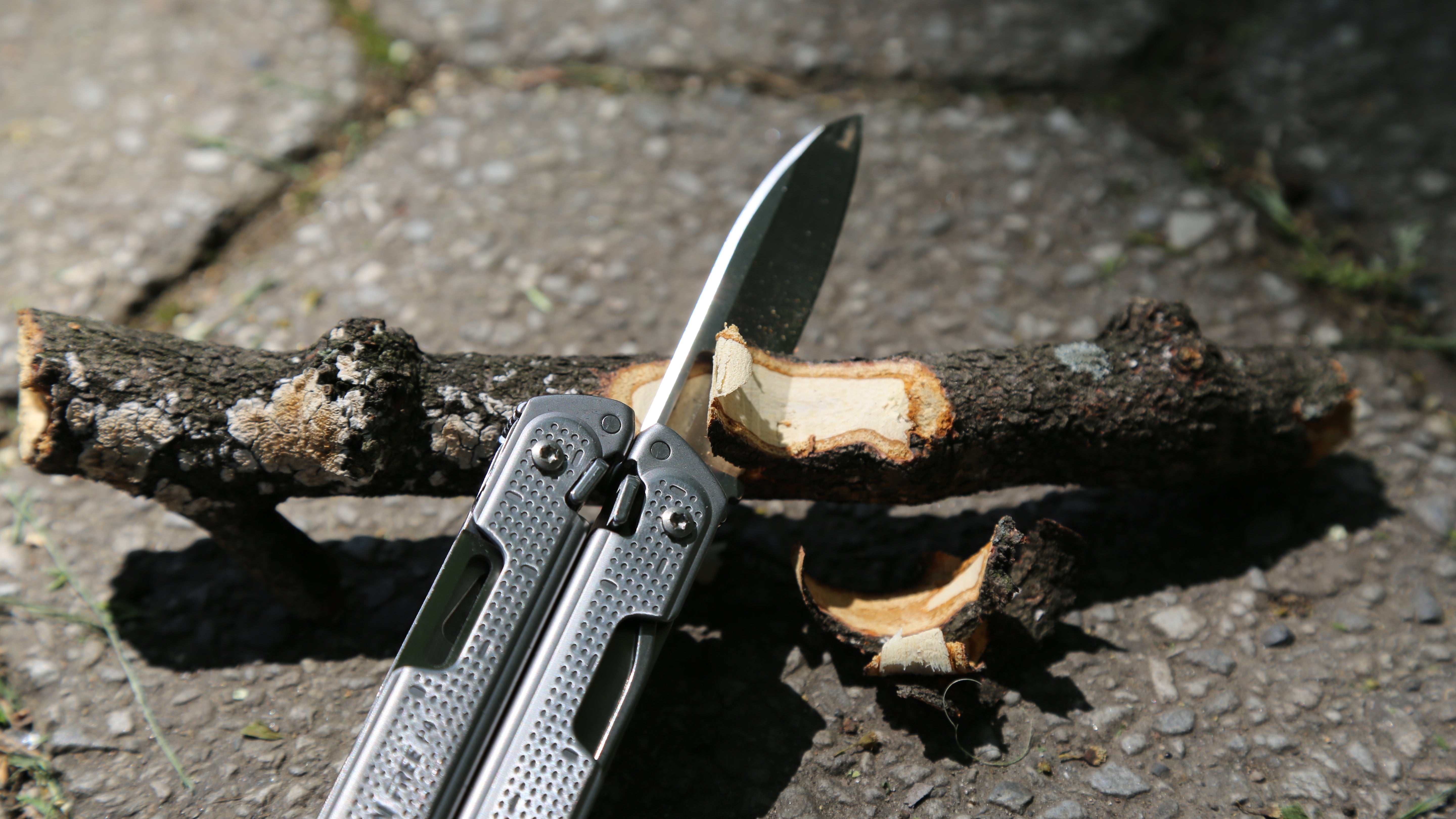 The Leatherman Free P4 is still great at whittling sticks. 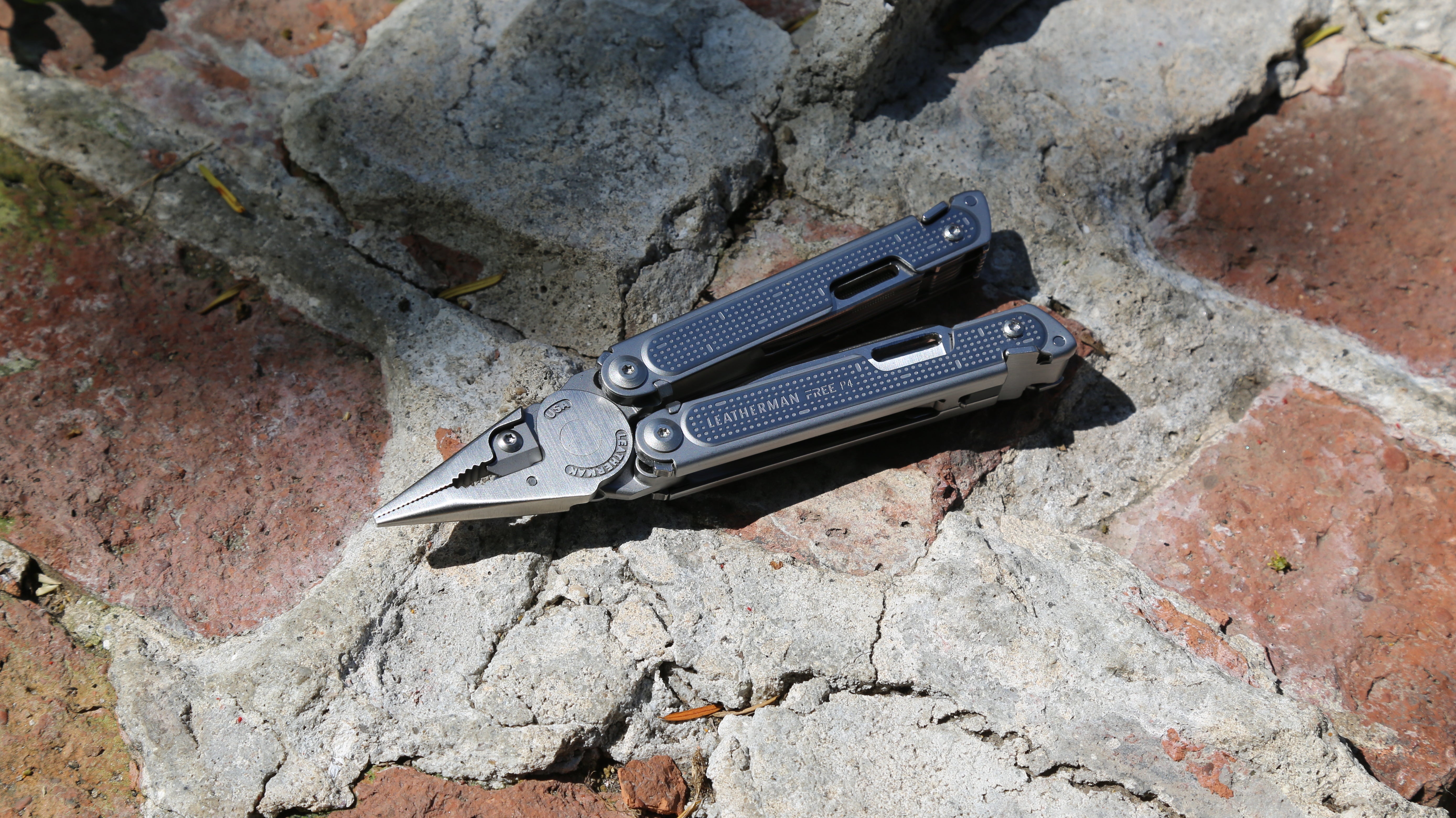 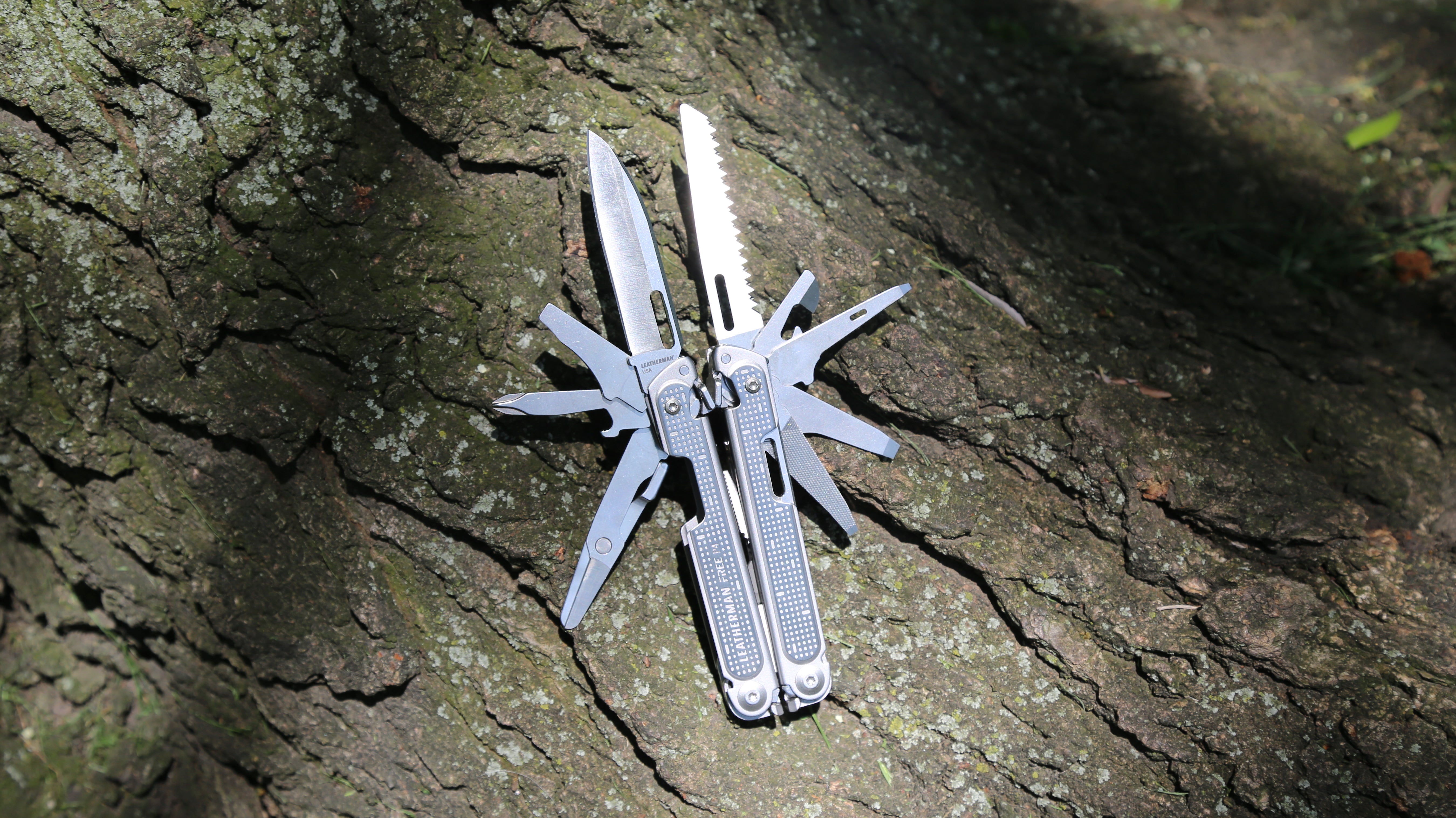 The Leatherman Free P4 with all of the tools engaged. Notice how the pliers don’t have to be open for this. 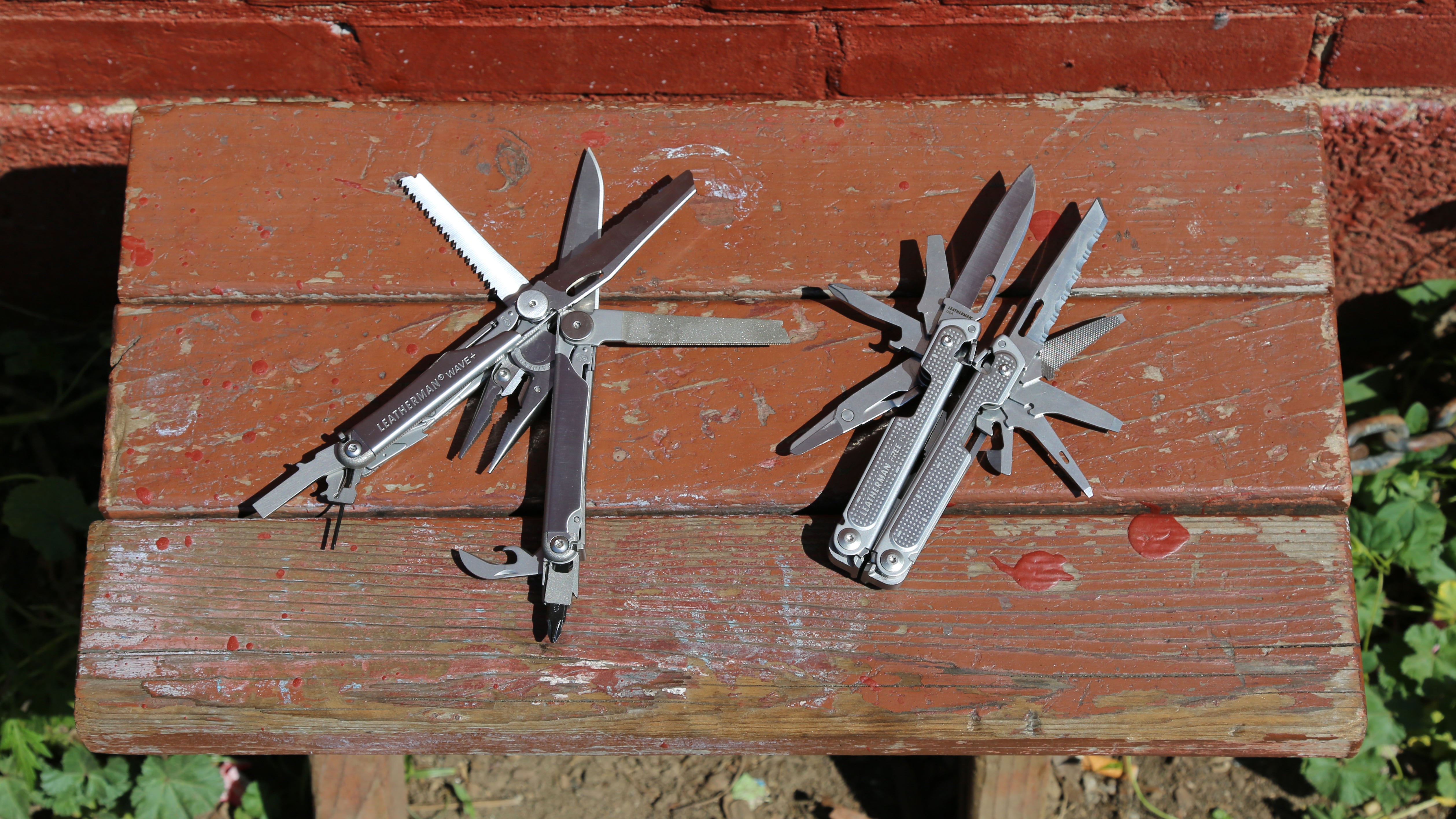 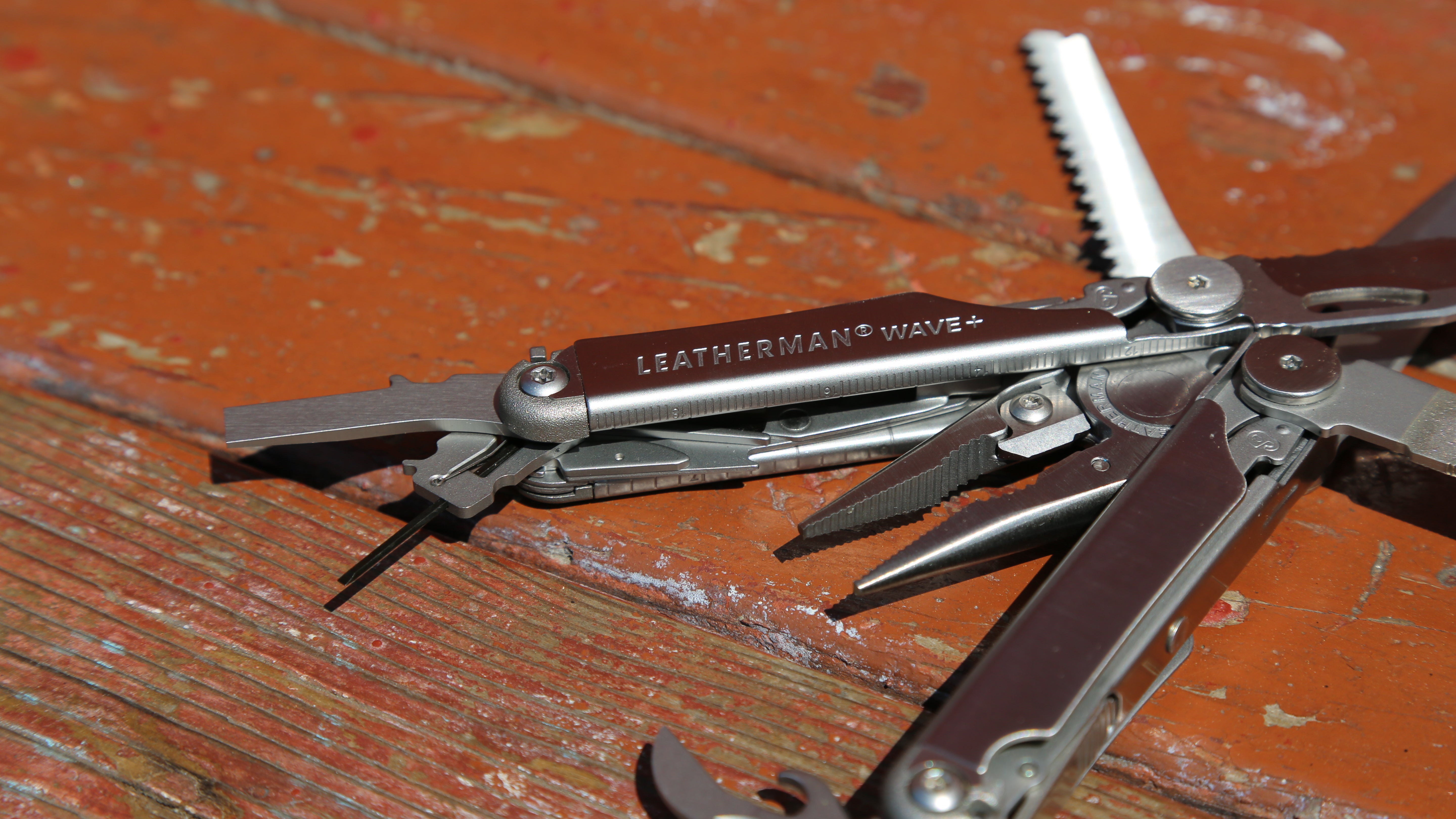 The Leatherman Wave+ requires you to open up the pliers to access many of the tools. 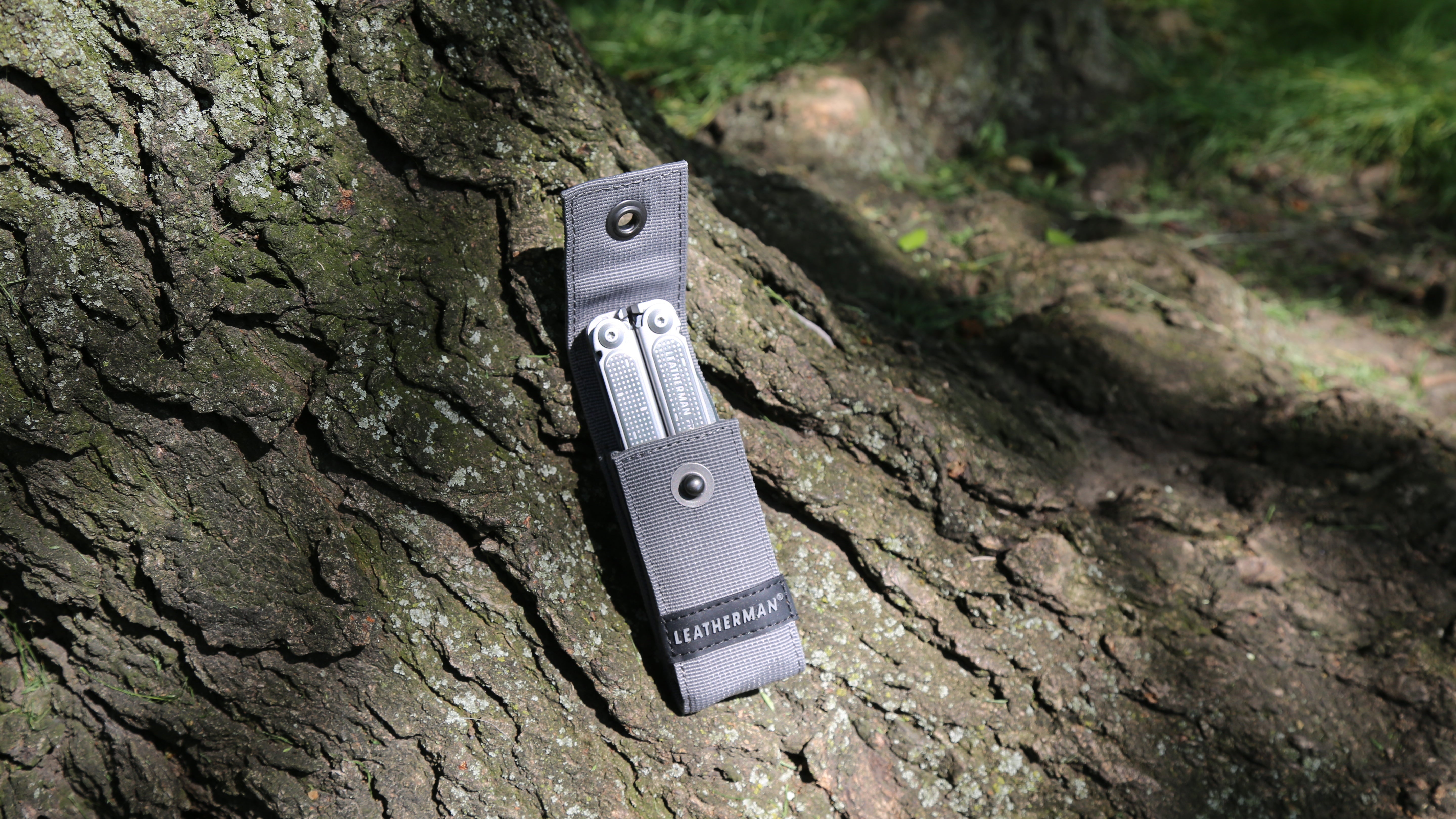 You can put the case on your belt!

Every tool locks when it’s fully engaged, and while the locking mechanism isn’t entirely intuitive, it feels safer than what’s on the Wave+. The lock on the Free P4 is essentially a pair of interconnected levers that clip into place when you open a tool. You slide that lever towards the center of the tool to release the blade. Lever is probably a strong word to use, too, since these piece of metal are basically tiny tabs of metal that required a little pressure to move. Regardless, I much prefer this method to the button lock that’s on the Wave+. Pressing that button to unlock on the Wave+ puts your finger in between the blade and its reseting place which is never a place I want to be.

All that in mind, it’s worth pointing out the design upgrades on the Free P4 are much more pronounced when you’re dealing with the smaller tools. Popping the tools out with the slide of a finger on the Free P4 is just so much easier than opening up the Wave, finding the tool, shoving your fingernail into that grip spot, and prying the thing out. Furthermore, the small tools actually have a separate locking mechanism on the Wave+ that requires you to push a different button on the outside of the handle. It takes some getting used to, and you might cut yourself by pressing the wrong unlock button and fumbling the whole damn thing at some point, because I did.

All folded up, no place to go (Photo: Adam Clark Estes, Gizmodo)

What pleased me most with the Free P4 was how the overall ease of use made me want to reach for the multitool more. It’s weird to describe the thought process (or lack thereof), but even though I’ve always had a multitool around the house, I would typically reach for the tool itself instead. Like, if I needed to screw in a Philips head screw, I’d use a Philips head screwdriver. The Free P4 now feels like it’s daring me to use a less convenient tool. After all, there’s a chance I’ll strip that Philips head screw and need to turn to a flathead or a knife to get the job done.

It’s true that former Leatherman multitools offered this multiple tool experience. That is, after all, what defines a Leatherman. But the Free P4 feels like something special, as it should for $340. It’s also just one member of a new family of Leatherman multitools. The 21-tool P4 is accompanied by the 19-tool Leatherman Free P2, which lacks a saw and combines the regular and serrated knives. Leatherman also plans to release the Free T-collection, which resemble Swiss Army knives, and the Free K-collection, which look like more traditional pocket knives. All things told, the new Free series represents a new frontier for Leatherman design.

I’m not a daily Leatherman user, but I am a longtime enthusiast. The feeling of picking up a Free P4 after years of fewer multitools actually reminds me of that moment, years ago, when I first swapped out my Swiss Army knife for a Leatherman and saw a different way. Except now, I guess, I feel less likely to injure myself and more likely to solve problems in the city and in the woods. Maybe that’s just what growing up means.