Does a VR headset still qualify as a standalone device if the computer powering the headset is strapped to your back rather than built into the goggles? I don’t know, and I’m not sure how much that distinction really matters, because while Oculus is out there trying to make VR go mainstream with gadgets like the Oculus Quest, HP’s revamped VR Backpack is expanding the boundaries of high-res virtual experiences.

You see, back in 2016 when HP first released the original Omen X, VR was still struggling. It was hard to build a system that met the recommended specs to power VR headsets, and the headsets required things like dedicated lighthouses or base stations to follow the movements of your head or hands properly. But thanks to developments like the improved inside-out tracking available on modern headsets, faster components, and some important design tweaks, HP’s updated VR Backpack makes more sense now than ever before.

Here’s the VR Backpack looks like when it’s not being used as a “normal” desktop. (Photo: Sam Rutherford, Gizmodo)

To start, HP took the same basic case and dock used on the previous model, and then crammed in updated guts, including an 8th-gen Intel Core i7 CPU Nvidia RTX 2080 GPU, and at least 16GB of RAM and 256GB of SSD storage. The result is what HP claims is the world’s most compact commercial VR desktop. And it is a desktop because when you’re not using it as a VR backpack, the main computer chassis can live in its dock, where it can be connected to a traditional display, mouse, and keyboard, just like a regular PC.

Then, to make its VR Backpack easier to deploy and operate, HP updated its backpack with a second mini DisplayPort to better support the demands of today’s high-res VR headsets, while also adjusting the placement of the backpack’s external batteries to distribute weight across the system’s harness better. In the end, while the weight of HP’s VR Backpack is mostly the same, it’s significantly more comfortable to use and has better compatibility with a wide range of VR platforms.

But the real magic comes when you pair the backpack with a headset with onboard inside out tracking. This basically turns the whole world into a giant VR playground where the only limits being how big of an area you can map in out software, and the backpack’s one-hour battery life. 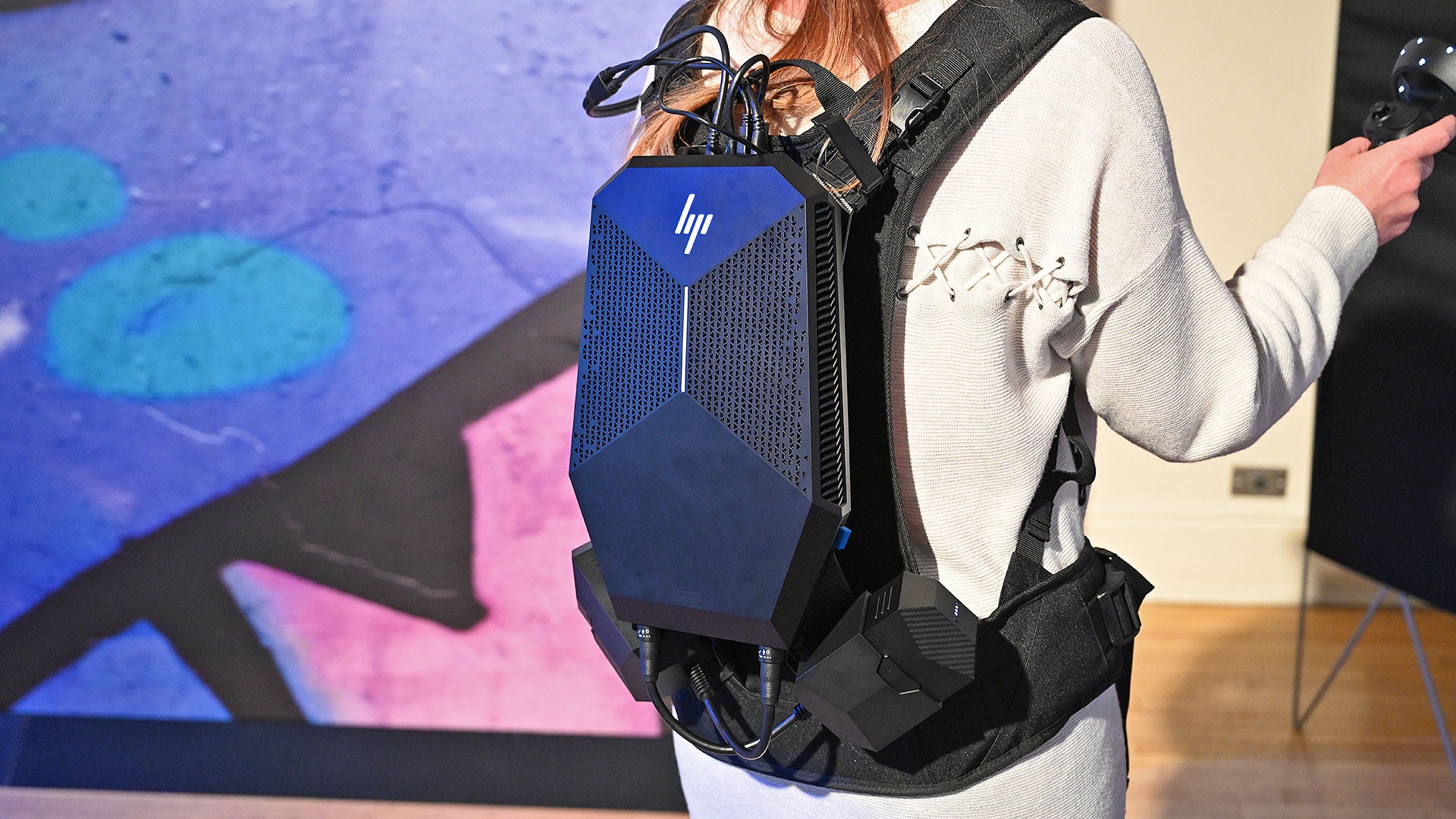 The placement of the batteries has been moved up and closer to the rear of the harness to distribute their weight better. 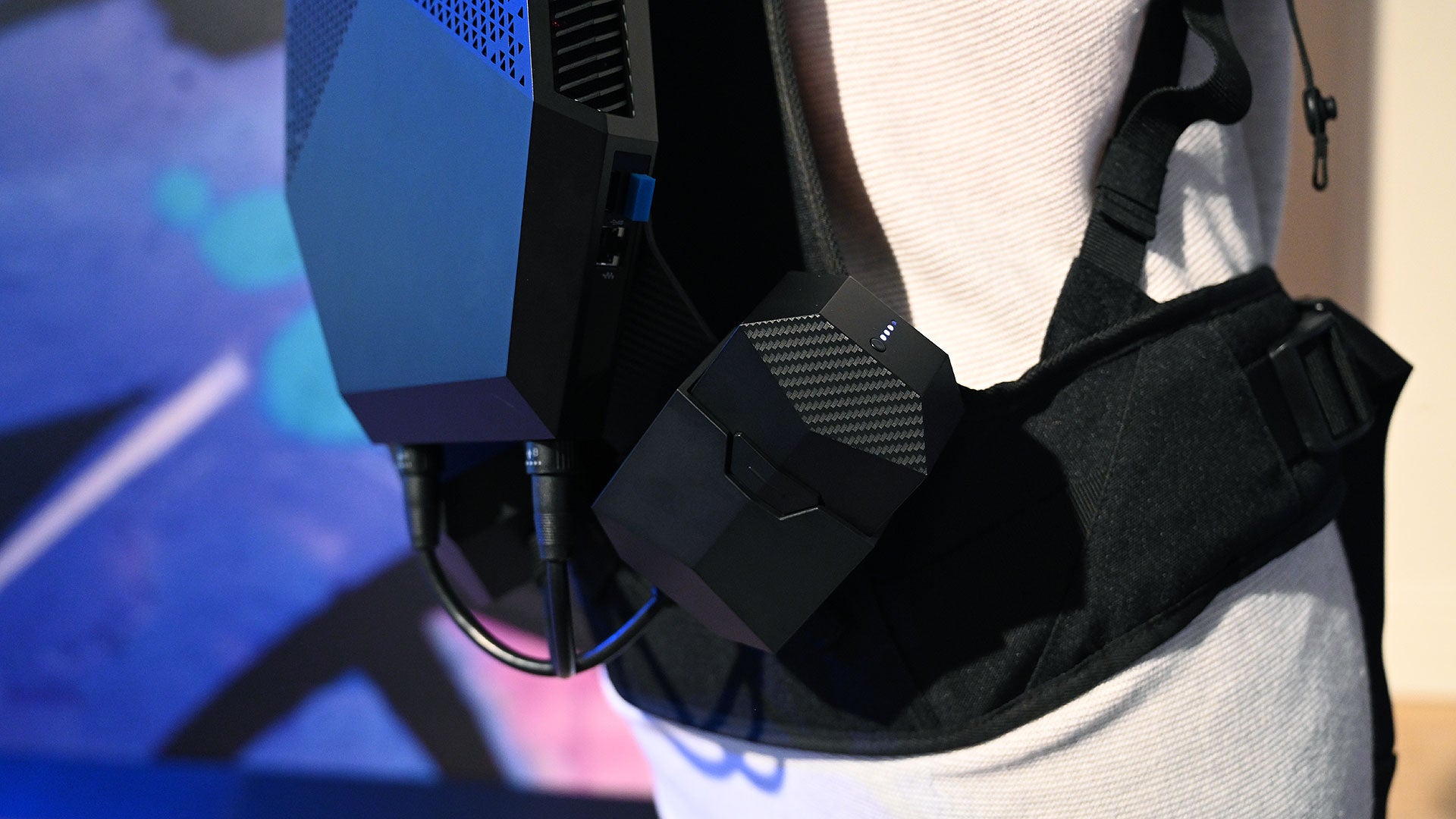 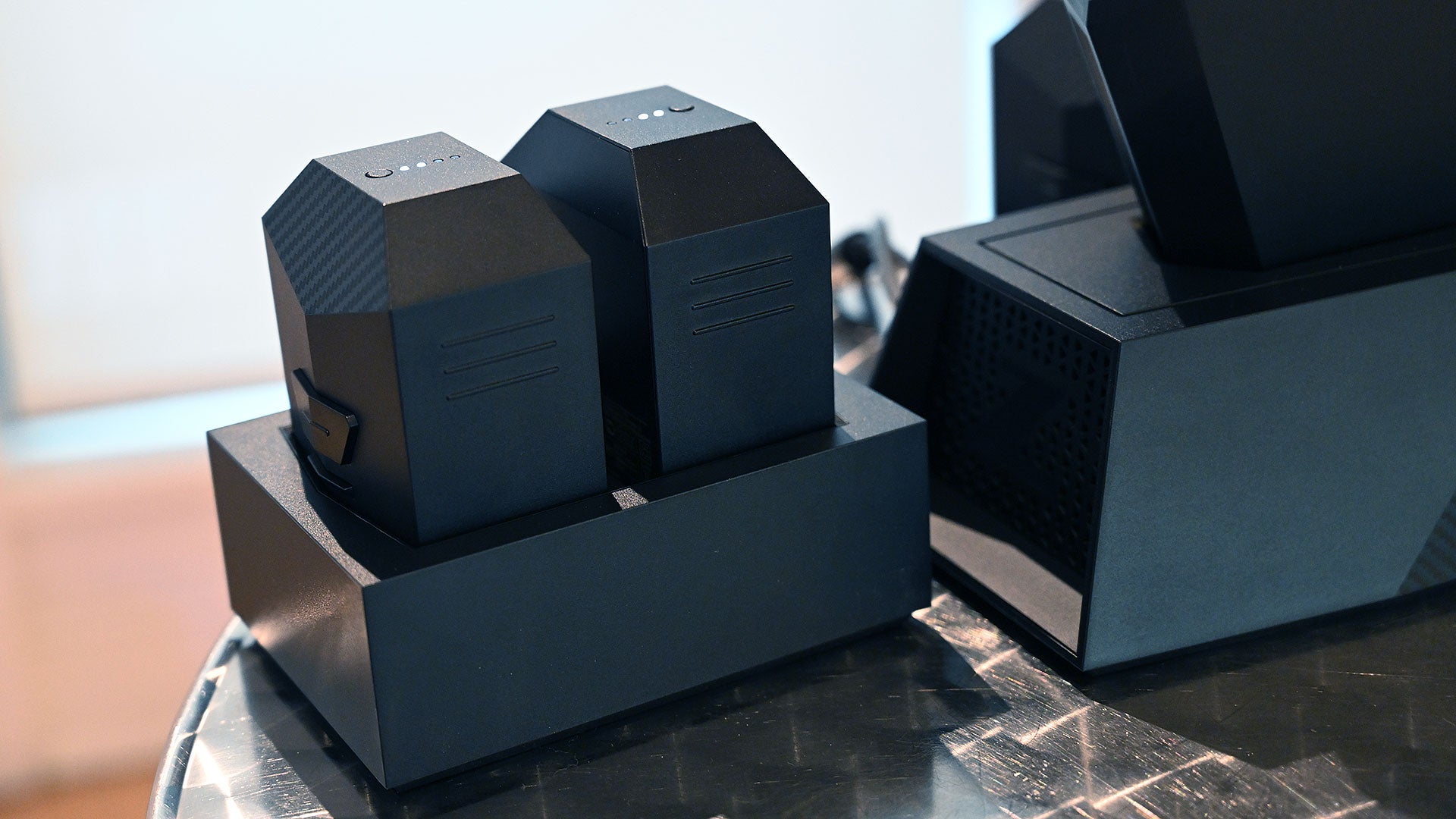 The backpack comes with its own battery chargers, but if you really want to take advantage of the systems hot swappability, you’ll need to get a second set of batteries. 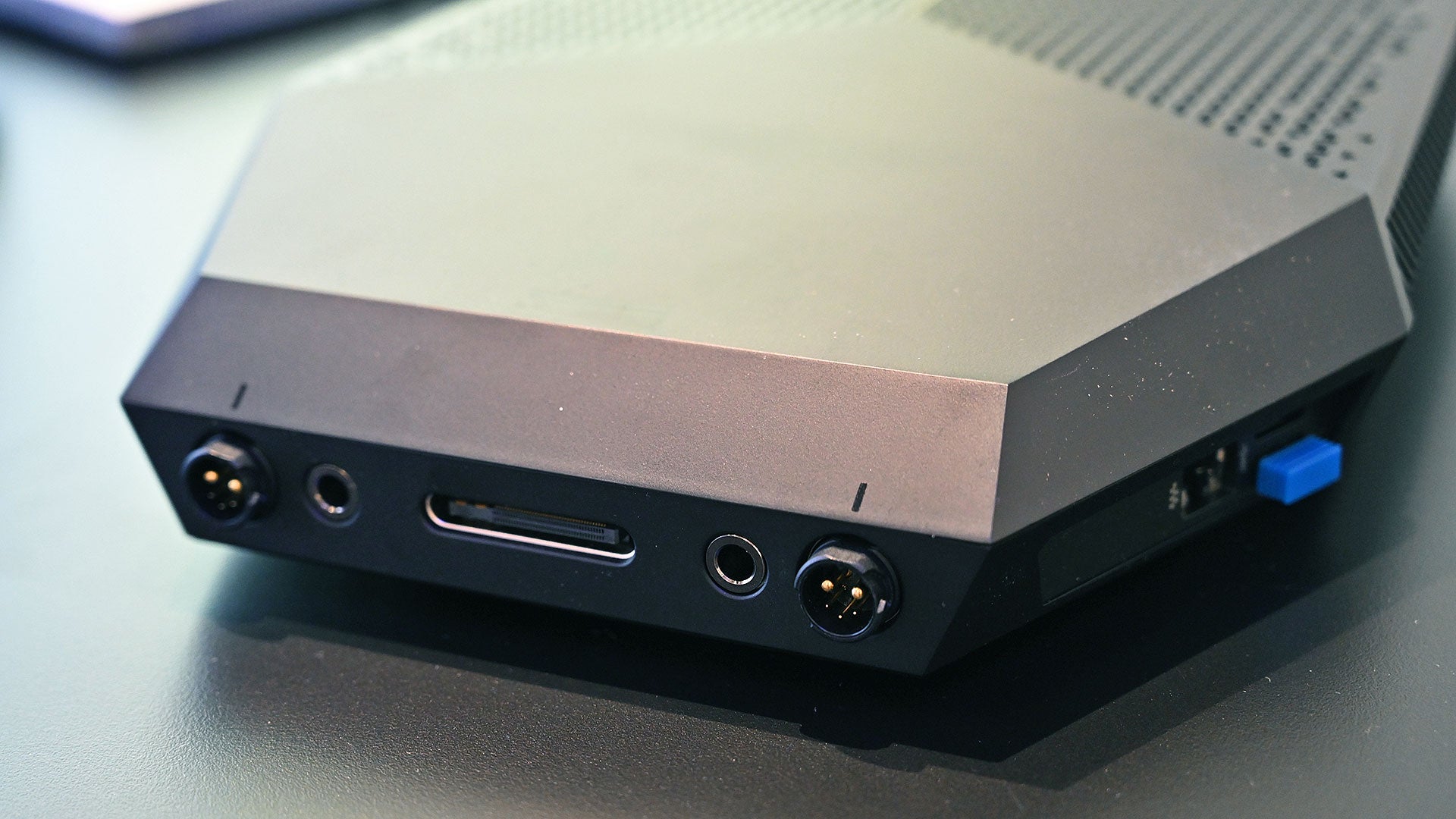 Here’s the backpacks docking port for when you want to use the system as a desktop. 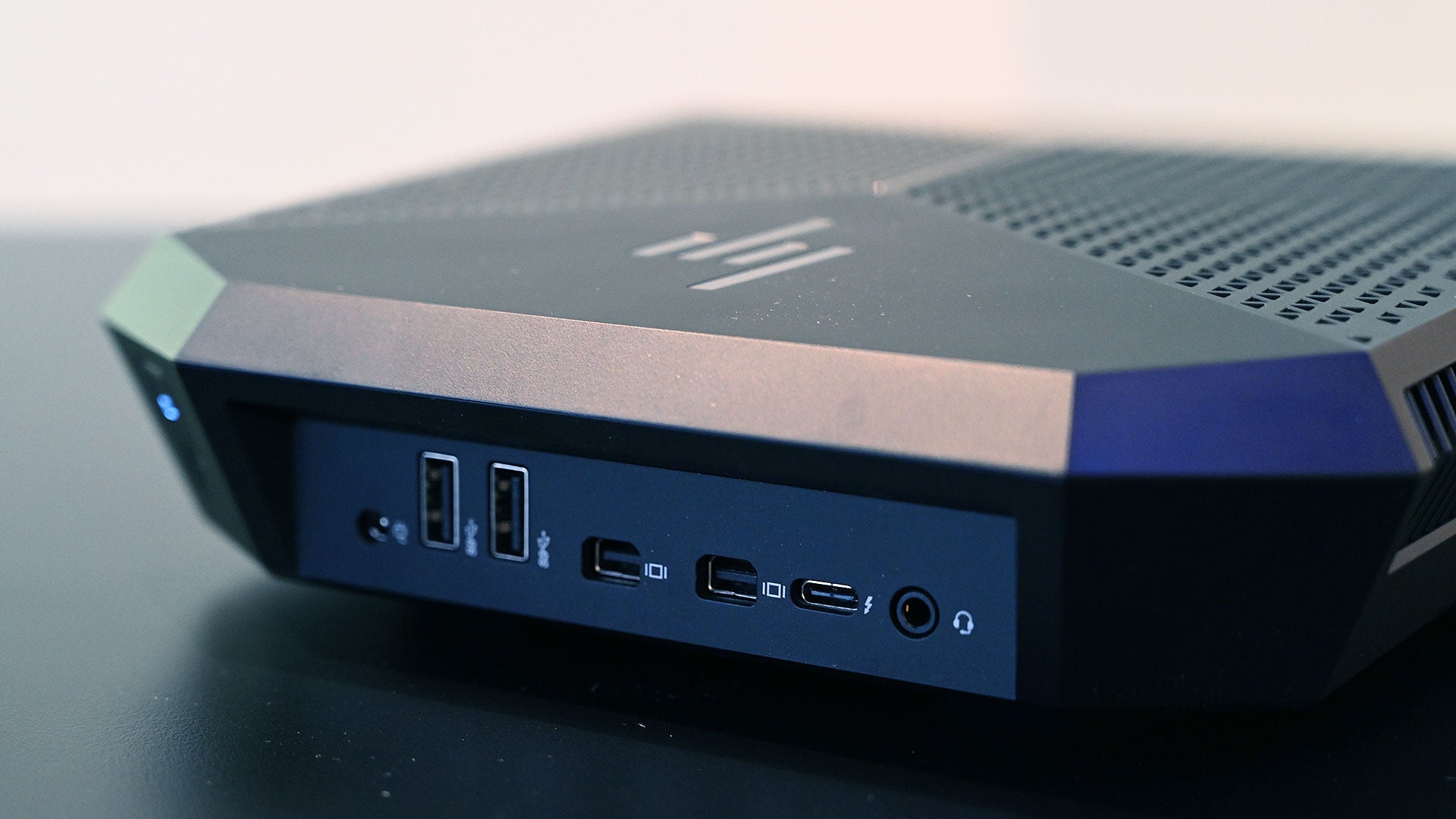 Instead of an HDMI port, HP opted to include a second mini DisplayPort, which is becoming a more common requirement for many high-end VR headsets. 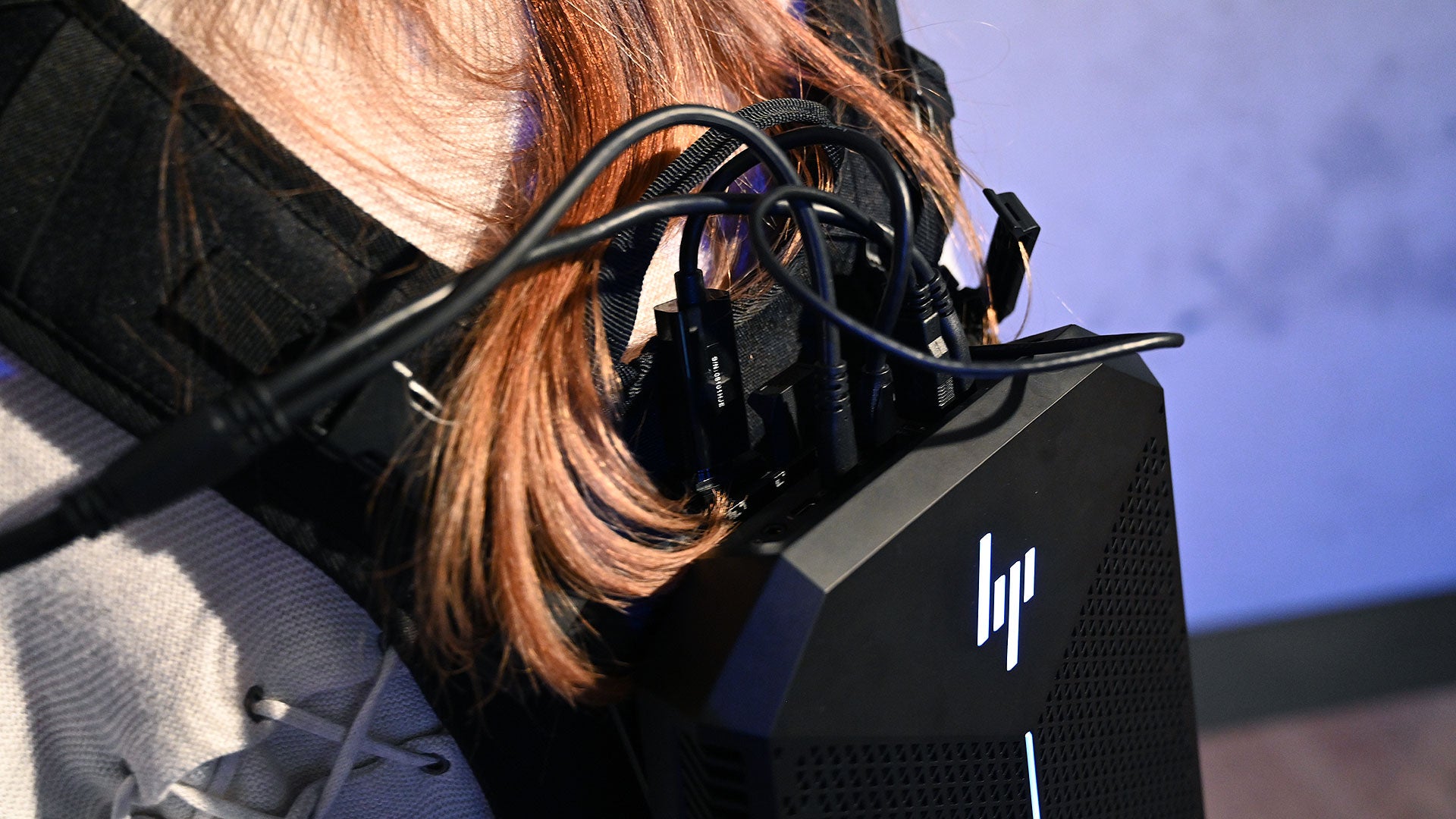 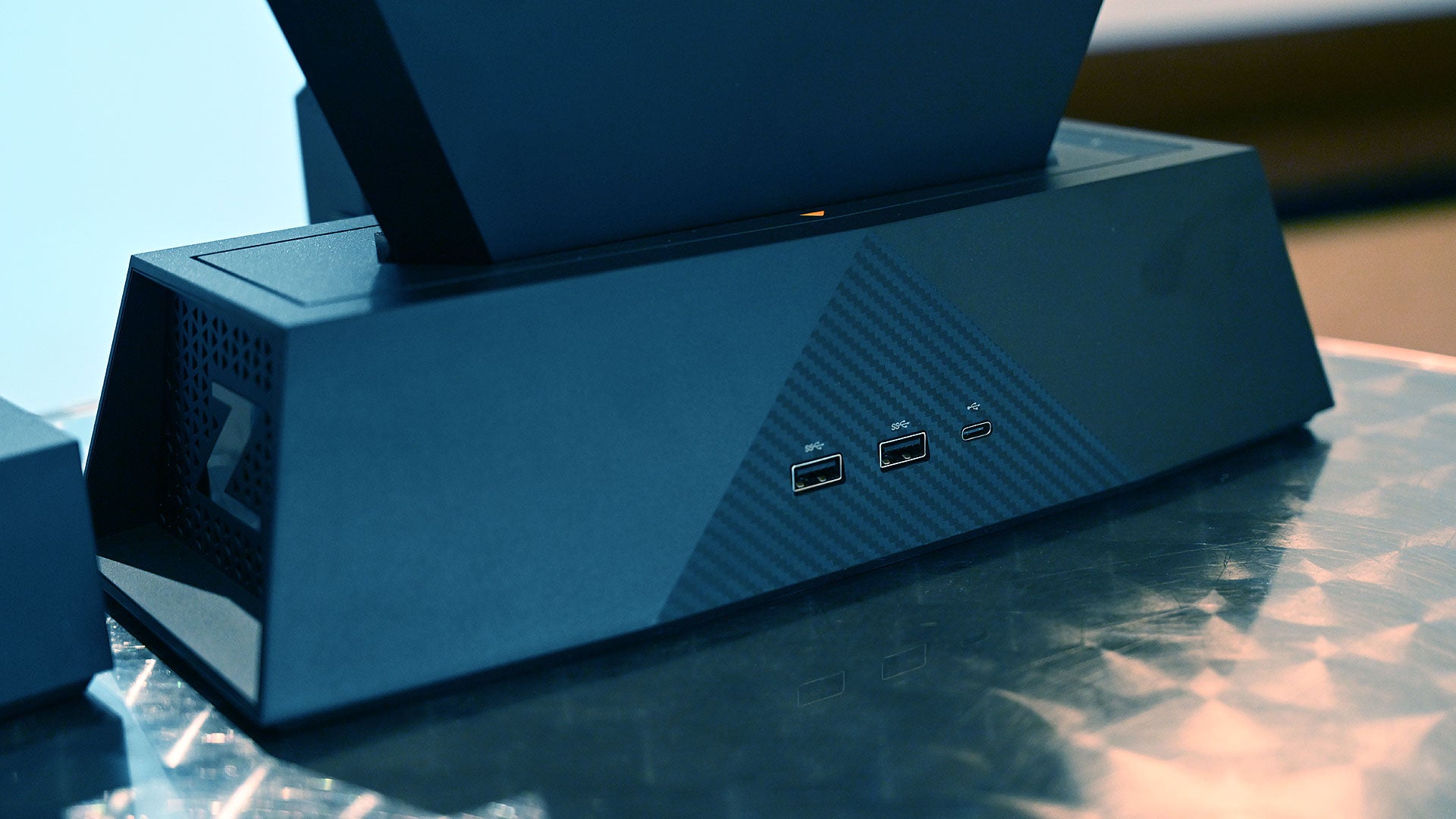 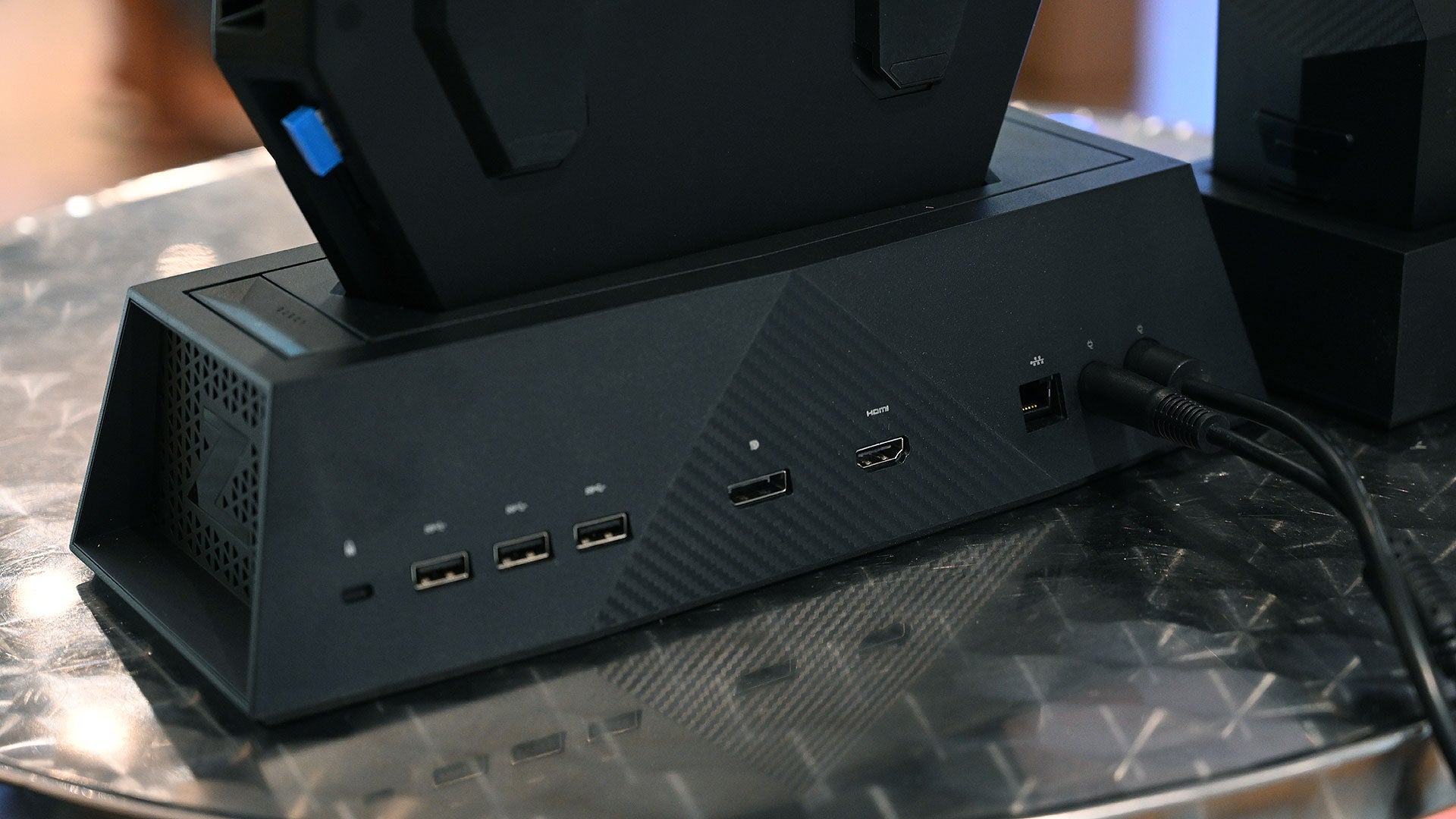 And a host of additional ports in back include 3 more USB ports, a full DisplayPort, HDMI, and Ethernet. 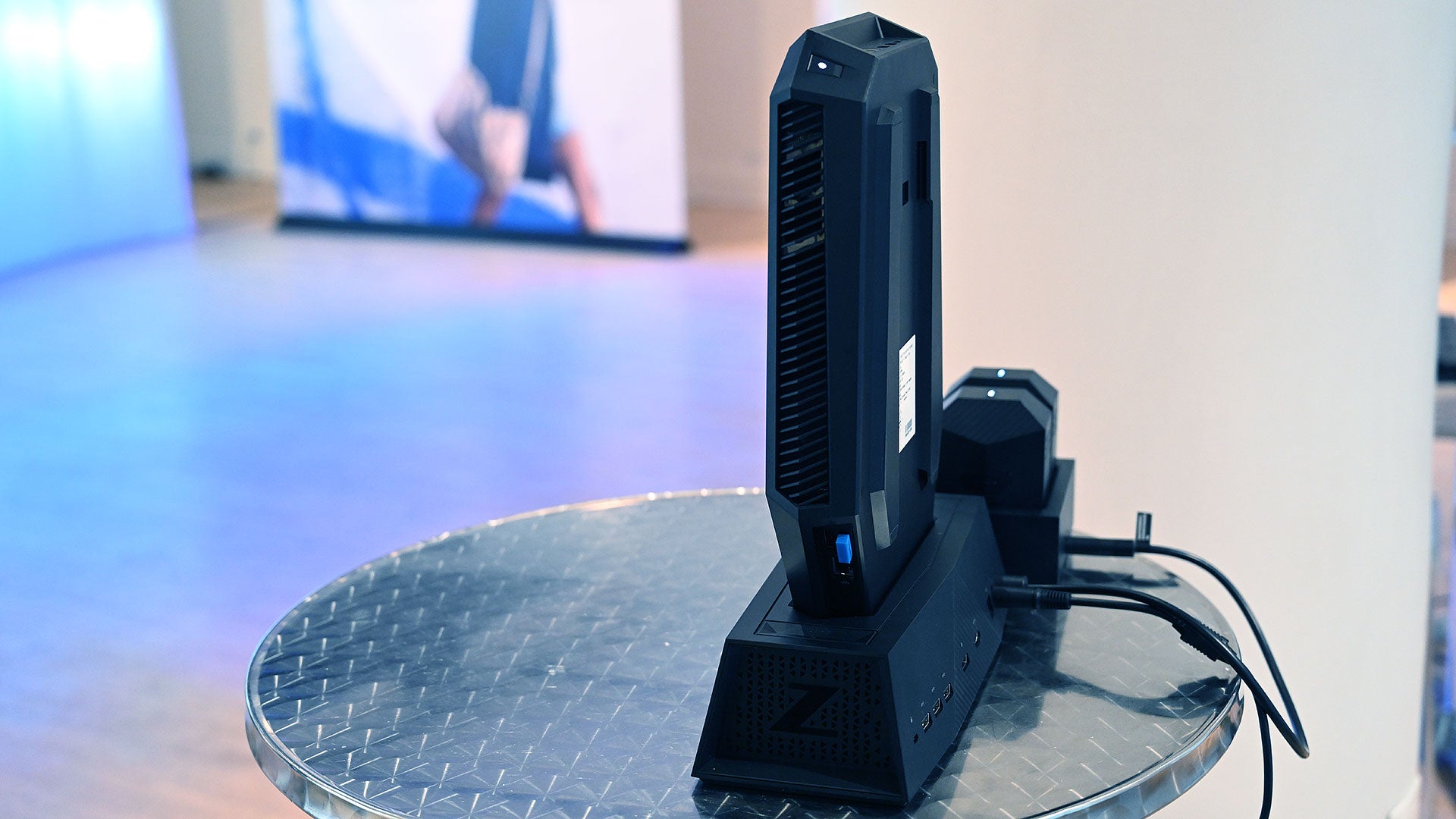 Naturally, HP would prefer people use one of the company’s Reverb headsets, but because the VR Backpack was designed from the start to be platform agnostic, it’ll also work with pretty much anything made by Vive, Oculus, or any other high-end VR headset maker. And because HP’s VR Backpack has significantly better performance than something like the Oculus Quest, you’ll potentially get better

Now I will admit that while the backpack’s 60-minute battery life does seem a bit short on paper, it’s more than enough for any sort of casual gaming. And like the previous system, because the VR Backpack’s batteries are hot-swappable, you never have to take more than a quick break to extend your VR session.

When I used the VR Backpack to sample some OSHA workplace training demo and take a virtual vacation to Helsinki, the simple freedom to explore virtual space without any wires nipping at my feet reminded how amazing untethered VR feels.

Unfortunately, with a starting price of $US3,300 ($4,763) (which includes the backpack, harness, desktop dock, two batteries, and dual-slot battery charger), HP’s updated VR Backpack is basically out of reach for all but the most die-hard VR enthusiasts. However, since the VR Backpack is targeted at both home users and commercial businesses, the backpack should also see life as a valuable training tool or 3D development station. And in the long run, by letting VR trickle down from enterprises with the kind of resources to develop new VR software and experiences, I think things like this VR backpack can help bring VR to just as many people (if not more) than headsets like the Oculus Quest.

And with a launch date sometime later this summer, as long as you (or your company) has the resources to throw down on niche VR tool like this, you won’t have to wait too long for HP’s wild VR Backpack to become a reality.