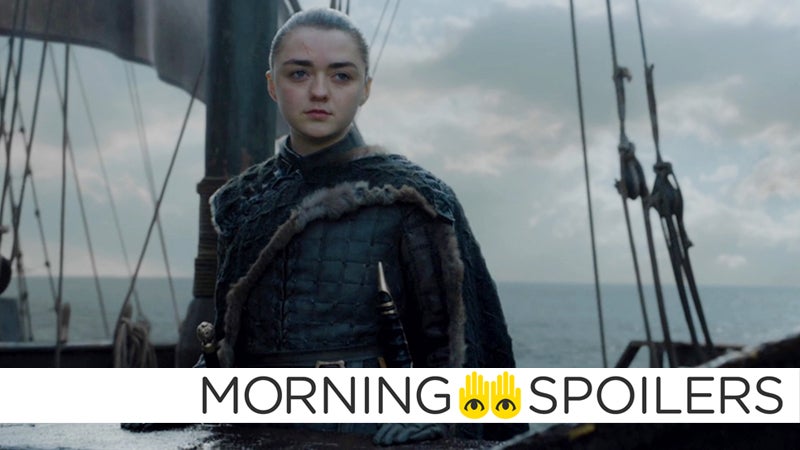 Deadline also has word André Øvredal (Scary Stories to Tell in the Dark, Trollhunter) has been hired to direct the film adaptation of Stephen King’s deadly walkathon novel for New Line.

Welcome to the day after Judgment Day. Check out the official poster for #TerminatorDarkFate. Teaser trailer tomorrow. pic.twitter.com/dXeAwYrsAi

The Game of Thrones Universe

HBO’s programming president Casey Bloys did a post-Game of Thrones finale chat with the Hollywood Reporter.

He gave updates first on the prequel series already in the works, “I am not clarifying anything other than yes, we shoot the first pilot in June. There are two more in development and beyond that, there’s nothing else to report..” Except:

We’re shooting the pilot in June, you can do the maths and figure out when it would be on the air. What I’m not doing is working backwards by saying, “This has to be on the air by this date.” We want to do the best show possible. This is a pilot, so we’re doing it the old-fashioned way, which is shooting a pilot. My expectation is it will be great and we’ll move forward and it’ll move along on a regular TV timetable. I don’t want to speculate any dates.

…There’s no scenario where [screenwriter] Jane [Goldman] saw the [Thrones finale] and said, “Oh, I better change this, that or the other thing.” We’re trying to have a show that feels like its own show within the universe but we’re not trying to replicate the same show. It’s not the same characters, it’s not the same dynamics. It’s not like we’re taking the existing show and saying, “X, Y and Z worked, so let’s do that.” It’s a different writer, creator and different feel and different world.

Then he was asked directly whether Arya’s ending meant we would see a spinoff with Maisie Williams. His reply was extremely certain:

Nope, nope, nope. No. Part of it is, I do want this show — this Game of Thrones, Dan and David’s show — to be its own thing. I don’t want to take characters from this world that they did beautifully and put them off into another world with someone else creating it. I want to let it be the artistic piece they’ve got. That’s one of the reasons why I’m not trying to do the same show over. George has a massive, massive world; there are so many ways in. That’s why we’re trying to do things that feel distinct — and to not try and redo the same show. That’s probably one of the reasons why, right now, a sequel or picking up any of the other characters doesn’t make sense for us.

Meanwhile, John Wick’s Derek Kolstad has been hired to write the film adaptation of Just Cause, the popular video game franchise from Square Enix and Avalanche Studios.

Netflix has acquired the film rights to Omega Girl Falls in Love, a romantic superhero comedy based on an original screenplay by Tim Dowling.

After murdering Woody, The Child’s Play remake pays tasteful homage to the late Jim Varney by roasting Slinky Dog on an open flame.

A new poster (courtesy of Bloody-Disgusting) confirms the third film the killer entomologist franchise is officially titled The Collected.

KSiteTV has photos from “Death Moves Pretty Fast” and “The Scratchmaker” the next two episodes of iZombie. Click on the corresponding episode title for more.

The team takes on Mr. Nobody in KSiteTV’s photos from the season finale of Doom Patrol. Head over there to see the rest.

KSiteTV also has photos from the pilot episode of Swamp Thing. Click through to see the rest.

Relatedly, Spoiler TV has photos from the second season premiere of Krypton, “Light-Years From Home.” More at the link.

Finally, the CW has released a brief but intriguing trailer for “The Gospel of Josephine,” next week’s episode of The 100.