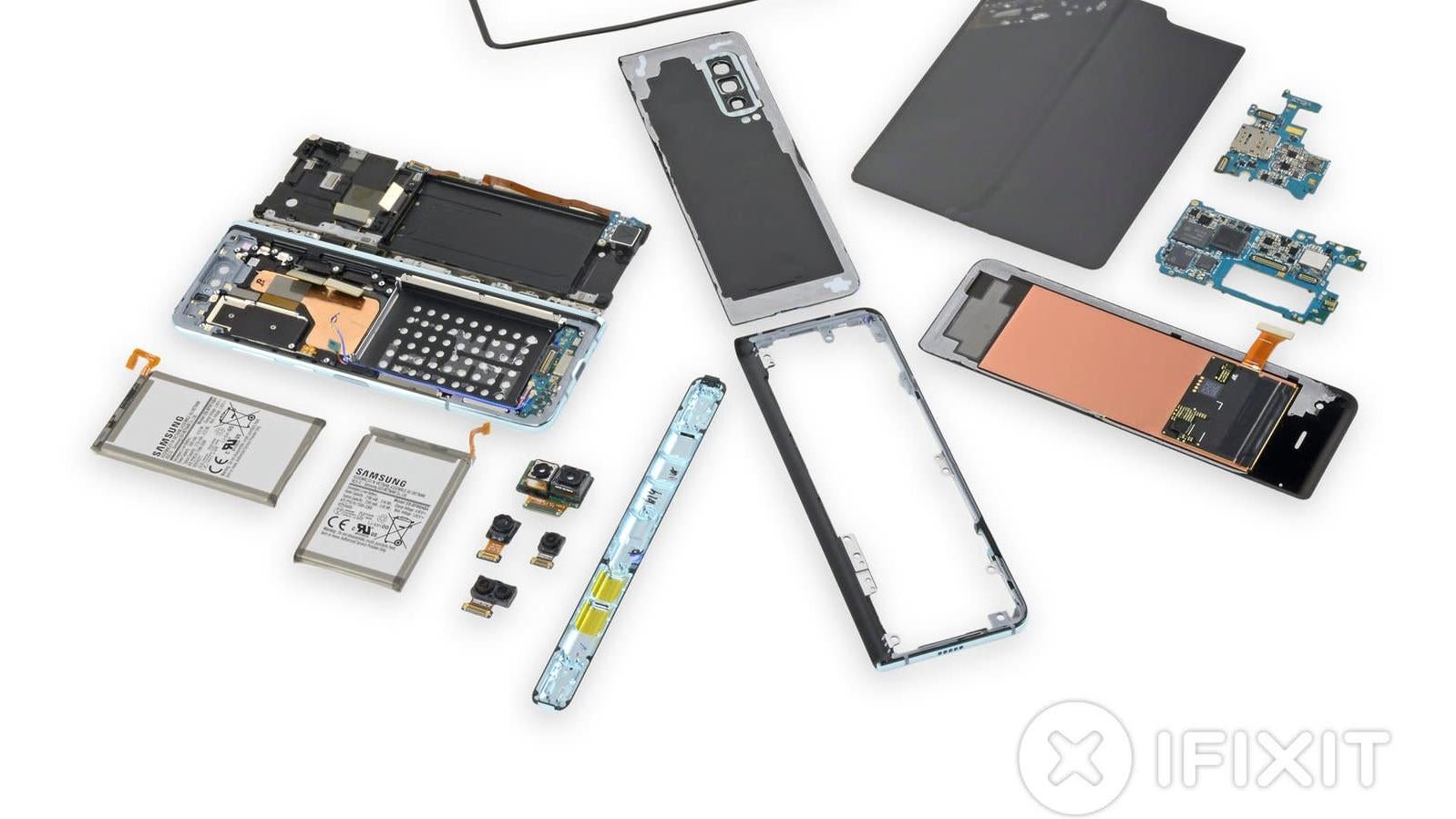 After concerns about the Galaxy Fold’s durability, earlier this week Samsung pushed back the release of its very expensive and highly anticipated bendable phone.

Then yesterday, iFixit posted some theories on why the Fold might be failing. But today, iFixit released its full teardown for the Galaxy Fold, giving us the best look inside Samsung’s fragile foldable yet.

Similar to other Galaxy phones, the Fold’s exterior is held together by glue, while the phone’s flexible screen is stabilised by the Fold’s hinge and some interesting supports.

However, even before taking anything apart, similar to the worries I and a lot of other reviewers have pondered, iFixit expressed concerns about the gap at the top and bottom of the Galaxy Fold’s hinge where it meets the display. 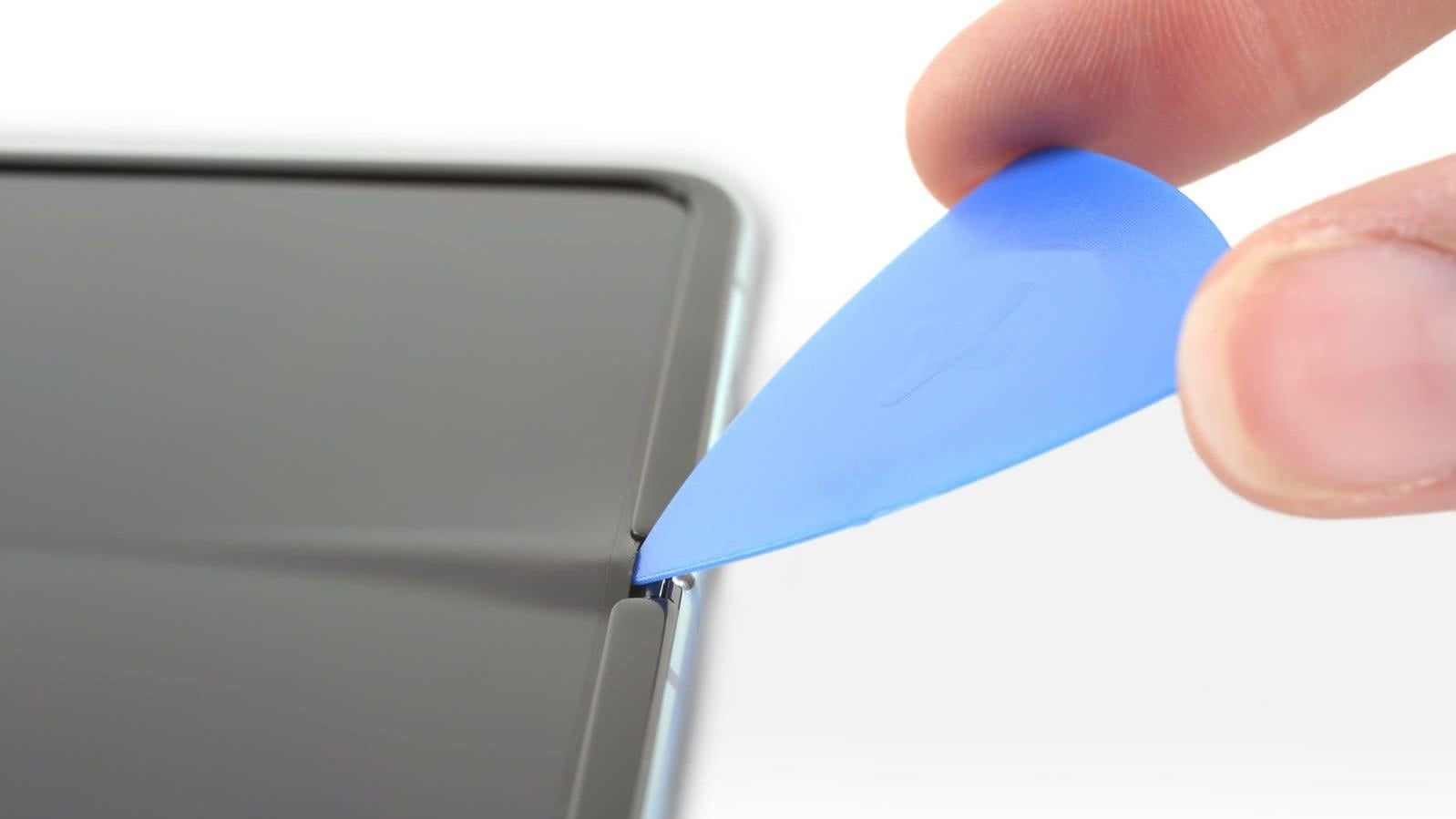 This gap seems to be the Fold’s biggest weak point. (Photo: iFixit)

At around 7mm wide, the gap doesn’t appear that large, but it seems to be the one real weak point on the Fold, as that opening allows particles or other foreign objects to sneak under the Fold’s flexible display and damage the screen.

And just within the last 24 hours, it seems Michael Fisher aka Mr. Mobile may have recently run into this exact situation, as it appears his Galaxy Fold review unit now has something stuck underneath its display that’s pressing upwards in an alarming manner.

Sigh. A little grain of something found its way beneath my Galaxy Fold display. Like the saying goes: "not surprised; just disappointed." Sending this back to Samsung hoping they figure out a way to seal up that hinge.

Another potential point of vulnerability seems to be the hinge itself. When the device is closed, the Fold’s hinge mostly protects the insides of the phone, though there are still gaps large enough to fit something the size of a guitar pick.

But the bigger issue is that when you open the Fold, each half of the display come together, meeting the middle where the two sides could pinch something. 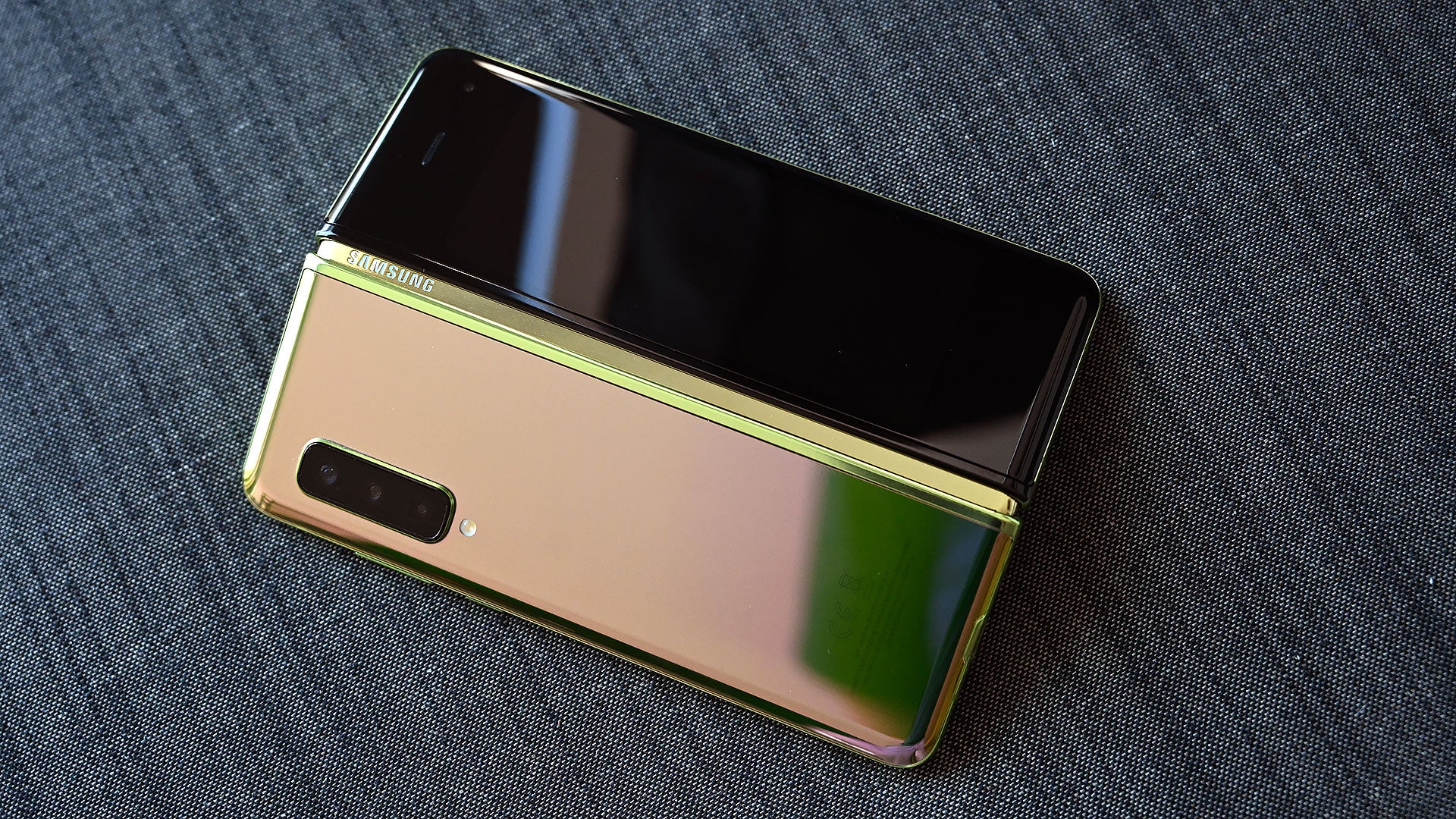 Based on Dieter Bohn’s description of what went wrong with the Verge’s initial Galaxy Fold review device, I’ve wondered if the Fold’s hinge may have been responsible for its unit failing.

As standard practice for shooting pictures and videos, it seems the Verge uses modelling clay to prop up its review devices, and it’s possible that at some point during the process, the Fold’s hinge may have pinched off a bit of clay, which later found its way under the screen and eventually caused the display to malfunction.

As you get deeper into the Galaxy Fold’s guts, aside from its screen, its innards are quite similar to a typical phone, but with a bit of added complexity and a lot of glue.

The Fold’s 4,380 mAh battery is actually comprised of separate power packs with capacities of 2,135 and 2,245 mAh that are joined together to form one extra-large battery. 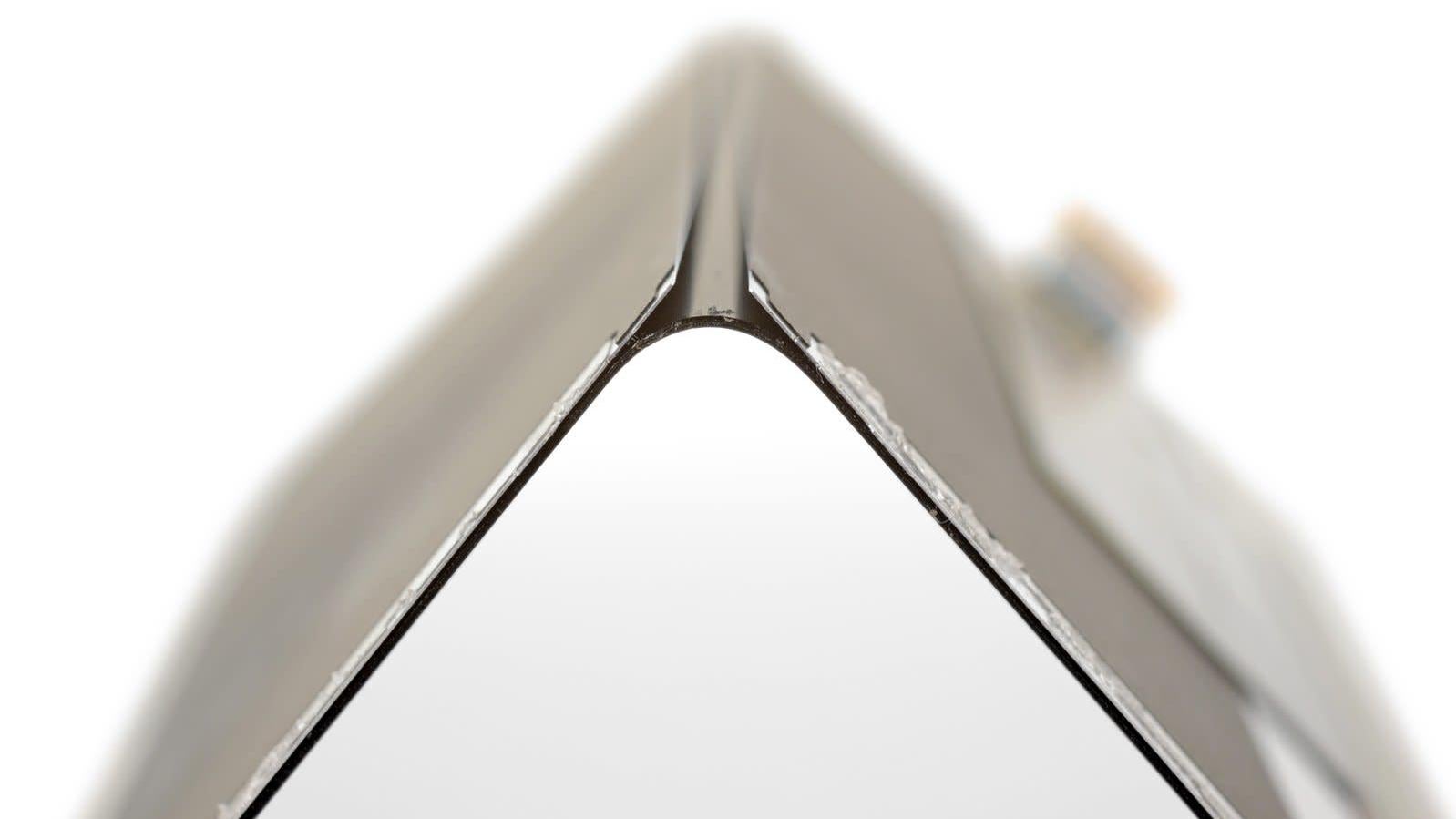 And while the Galaxy Fold doesn’t have any sort of official water-resistance, it seems Samsung did install some silicone seals around the Fold’s flex connectors to give it at least a tiny bit of extra protection.

As for that screen, the thin 2mm bezel around the edge of the device can be simply peeled away. From there, you can see that the Fold’s bendy screen is attached to two metal plates with a gap in the middle meant to give the screen room to flex.

The plates help give the Fold’s screen stability, while still allowing the hinge and flexible display to do their thing.

But even more than the bendy screen, the Fold’s coolest party trick may be its hinge, which combines a rounded sliding hinge, spring-loaded clasps, and an assortment of gears to hold everything together.

After feeling and now seeing the inner workings of the hinge, it’s clear that while the Fold’s screen may have durability issues, that hinge appears quite beefy. 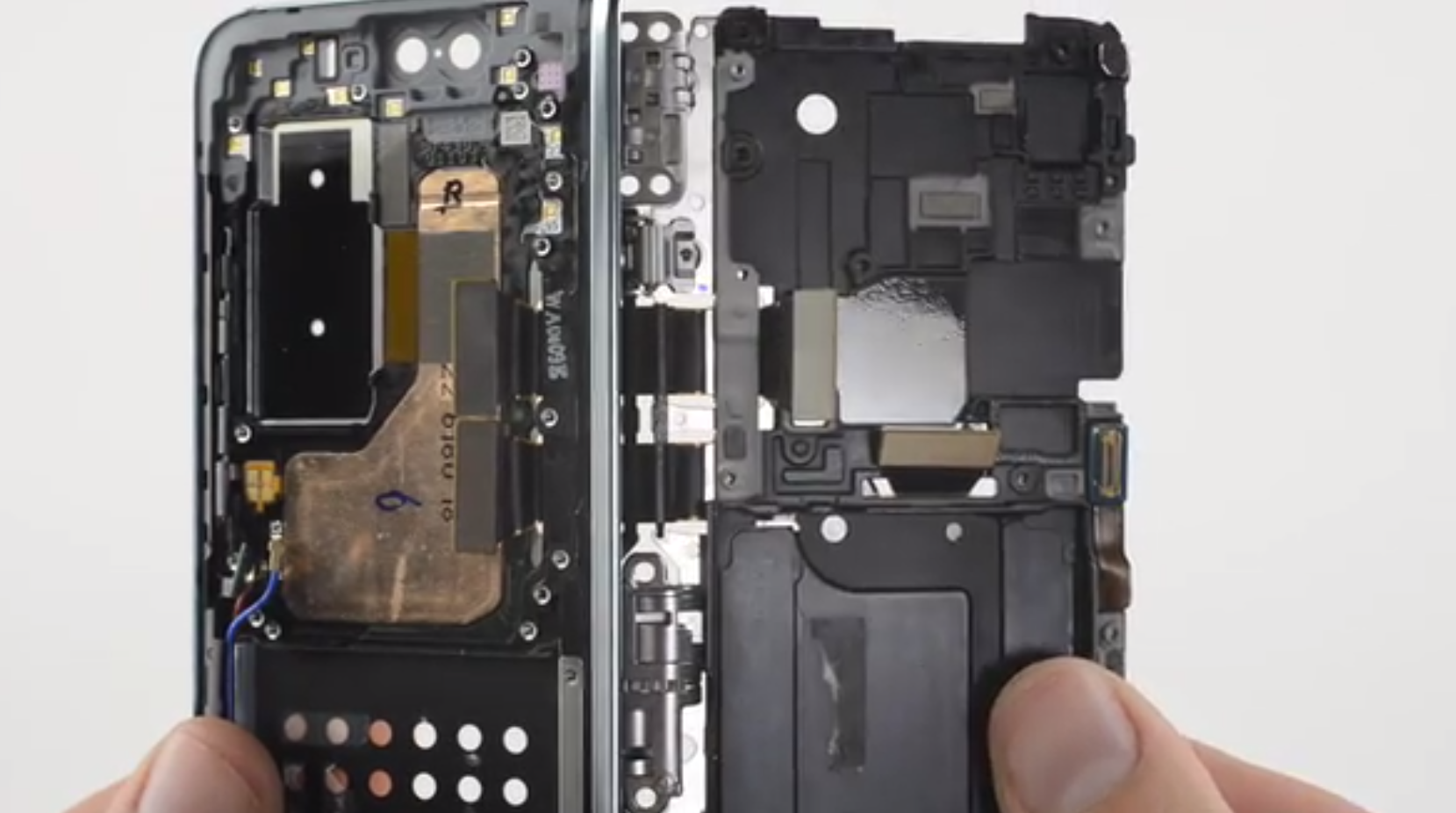 As someone who’s been using the Galaxy Fold, it’s really neat seeing the inside of the device, especially since I don’t have the luxury of being able to tear apart our review unit. At the same time, it’s wildly apparent that there are also some things Samsung should do to improve the Fold’s durability, so here’s hoping Samsung uses the extra time from the Fold’s postponed launch wisely. The last thing anyone wants is another Note 7 fiasco.

And if you’re looking for a deeper dive on what the Galaxy Fold is actually like to use and not just disassemble, check out our full review here.