Like top-of-the-line Alienware portables before it, the Area-51m “laptop” is gigantic, expensive, and won’t fool anyone into thinking it’s anything but a device for Rockstar-swilling gamers. But at the same time, it’s a departure from previous laptops in ways that a least try to address some of those problems. And yes, of course, it’s incredibly powerful and will scream through games. 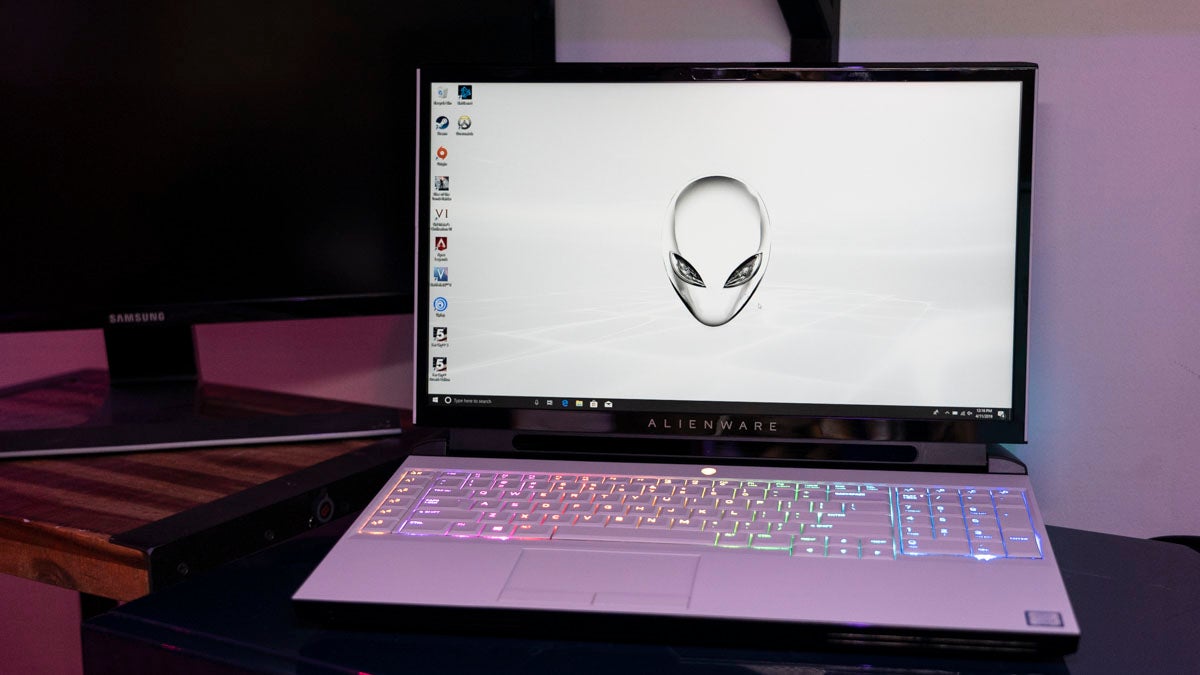 Super fast desktop components you can upgrade on your own! Lights!

The Area-51m has a fresh new look that’s meant to move away from the supercar aesthetic that Alienware has embraced for years, and if like me, you see a lot of gaming laptops, you’ll notice and appreciate the nuances. This is a beautifully designed device with gentle swooping curves, slim bezels, and fans that only softly whir.

Still, while testing the device in common areas of our office, more than one coworker stopped and stared. To summarise: This computer is gigantic and designed to appeal to geeks who flock to blinking LEDs lights like moths to lamplight.

There is no amount of engineering that can mitigate the size of a laptop with the best possible guts. Forget the 17 inch display. Depending on the configuration, this thing can weigh up to 3.8kg, and it’s 2 inches thick.

(A more reasonable gaming laptop weighs a little over 2kg and is .75 inches thick, whereas a 15 inch MacBook Pro weighs 1.8kg and measures .61 inches thick.)

Moreover, while the design might be more refined, the ominous Alienware logo still glows on the back of the display, and a prominent ring of light on the Alienware Area-51m’s huge butt looks like accent lighting on a space ship.

What’s more relevant is what’s going on inside, and how that affects the long-term cost of owning a very expensive device. This is the first laptop from Alienware to use desktop components, and like a good desktop, the Area-51m is upgradable, so you can swap out the storage, RAM, CPU, and GPU for newer guts when they start to show their age in a few years.

It took me about three hours to disassemble the device and swap out components, which is a pain considering I can do the same thing on my home desktop in under 10 minutes. On the other hand, my desktop stands well over two feet tall, and the idea that I’m taking that anywhere outside my house is preposterous.

There are some unanswered questions about just how much extra value this upgradeability will add to the computer. The CPU plugs into an LGA 1151 socket that’s been in use for several years, whereas the GPU requires a custom module that you need to obtain from Alienware.

If you had to buy a fresh i9 processor today, you would spend about $900. Alienware hasn’t hammered down pricing for what the GPU modules will cost in the future, but the company told us that the idea is not to sell them for profit, but rather as an added benefit to customers.

But with the questions aside, the concept at least is appealing: Here’s a very powerful portable computer that will hopefully be upgradable as long as you can get compatible components.

And improving the cost proposition would be great because Area-51m starts at $3,999, which is on the expensive side for something with an Intel 8th-Gen i7-8700 processor, an Nvidia RTX 2060 graphics card, and just 8GB of RAM. One might call that obscenely overpriced. The same goes for the $7,999 version I reviewed which comes with an i9-9900K, an RTX 2080, and 32GB of RAM (overpriced and spec overkill).

But the components are just a small part of this price puzzle. The Area-51m feels a lot less overpriced when you think of it as the nicest PC case ever made for a desktop — in fact, it’s cheaper than a fancy desktop with lights and liquid cooling from Maingear. 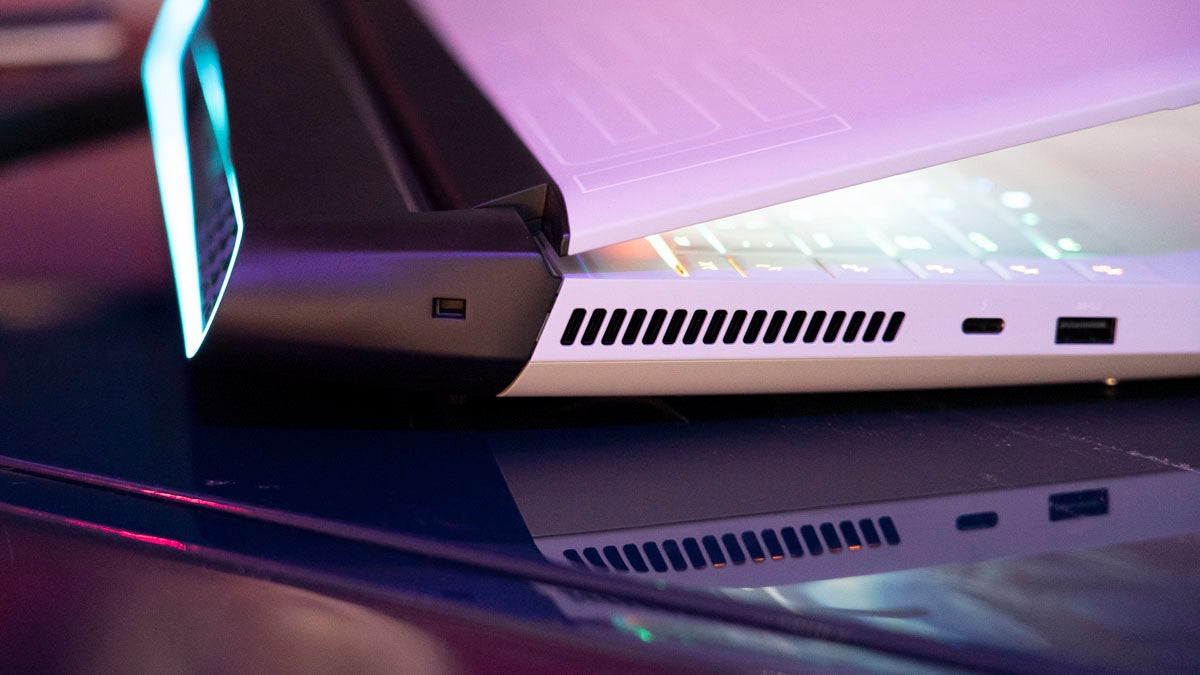 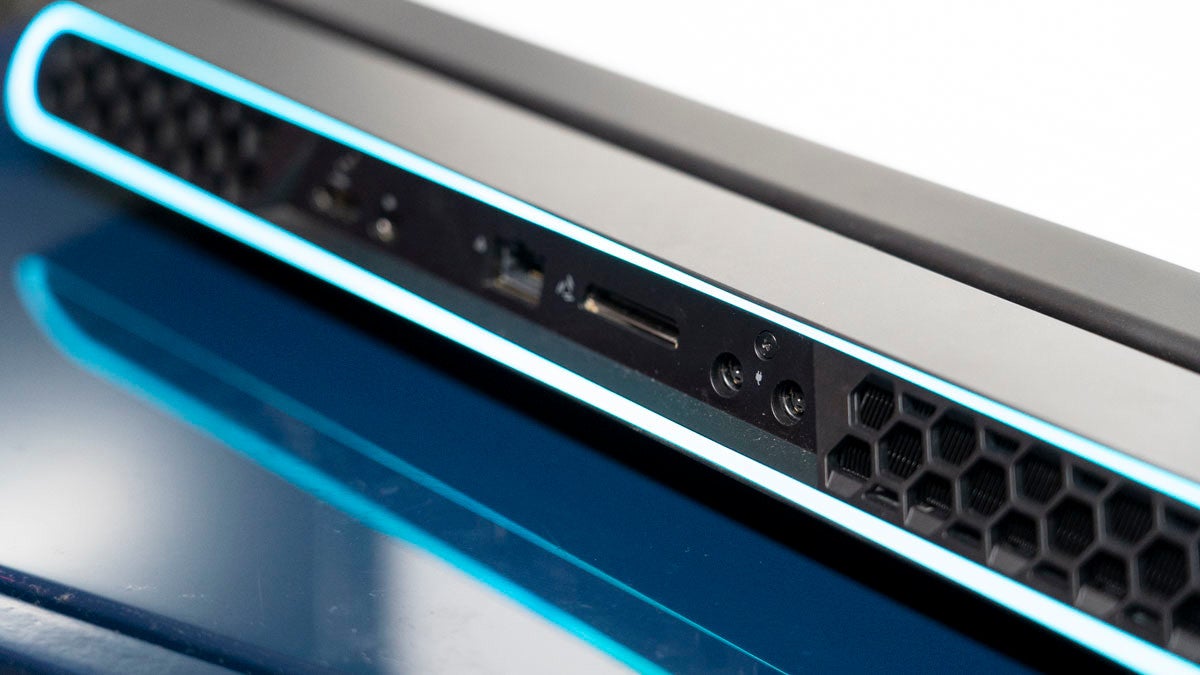 So as the fanciest PC case ever how is it? Incredible. When I had to bring it into the office so we could shoot some video footage of it last week, I was annoyed because it meant I couldn’t game on it for a few days. And because it’s got desktop components inside it’s incredibly fast, just as fast as my desktop, which has the same processor and GPU but half the RAM. In Far Cry 5 at 1080p, it did 126 frames per second, while my desktop managed 121 frames per second.

But it also has a 17 inch G-Sync monitor with a 144Hz refresh rate built in (cheaper builds drop to a 60Hz non-G-Sync display), and Tobii eye tracking, which naturally brightens the screen when I’m looking at it, and dims it when I look away. Those would both be things I’d think about buying with a custom desktop, and they’re very welcome here, particularly as they’re some of the least flashy parts of this very flashy laptop. 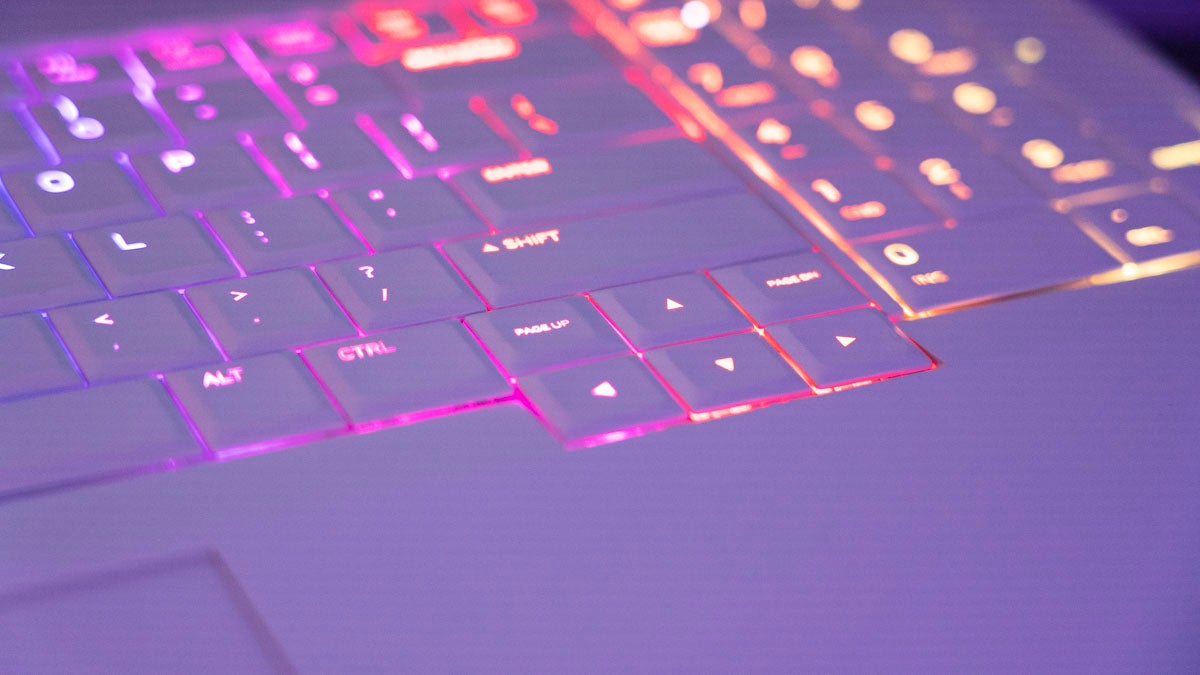 As we’ve said, this thing is festooned with lights. All the little alien heads, the keyboard, the trackpad—even a line of lights around the machine butt—glow, and the glow is customisable.

It looks lovely on the keyboard, which opts for low profile keycaps and softer switches that other gaming laptop makers building honking 17 inch devices in this price range.

I usually find off-centre trackpads irritating, but the way the Area-51m balanced on my lap kept me from getting annoyed. It’s slightly weighted more to one side as well, which makes everything feel very natural, and while it’s much less pleasant on my desk, where stability ruins that funky balanced feel, there are plenty of USB ports so you can connect a mouse, keyboard, and other peripherals.

A final note about the blingy lights: Customising them is a nightmare. The customisation splits the keyboard apart from all the other glowy bits, so if you want everything to match, you have to go into two separate menus. But that’s a pretty small complaint. 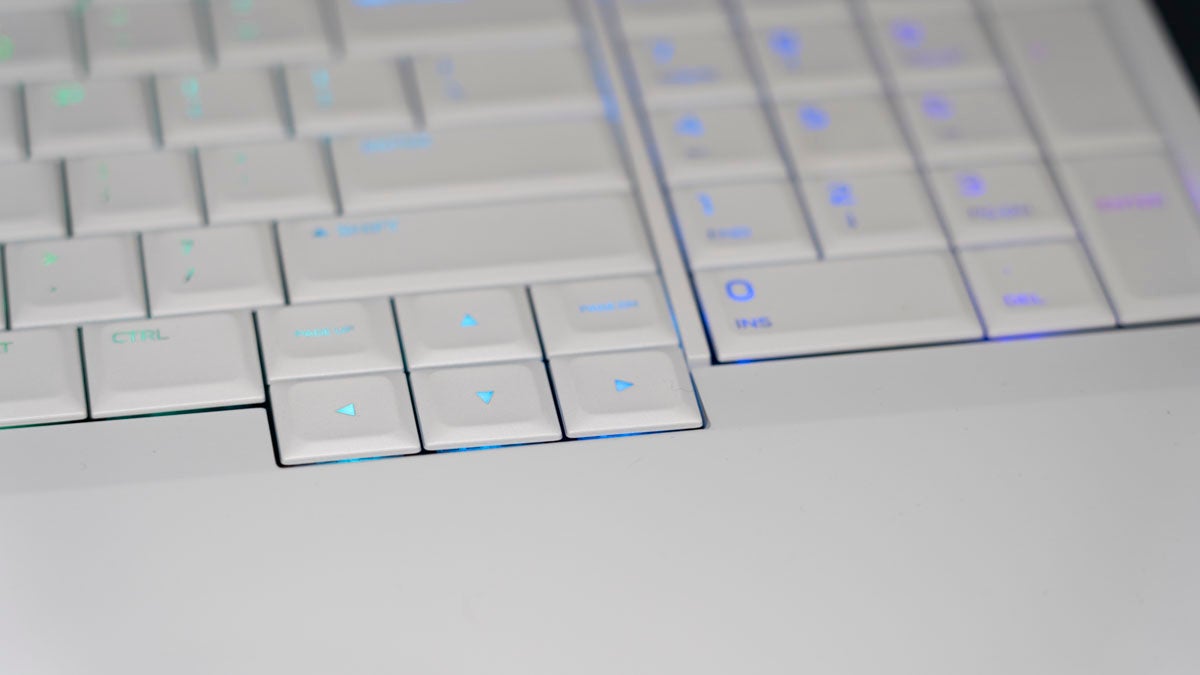 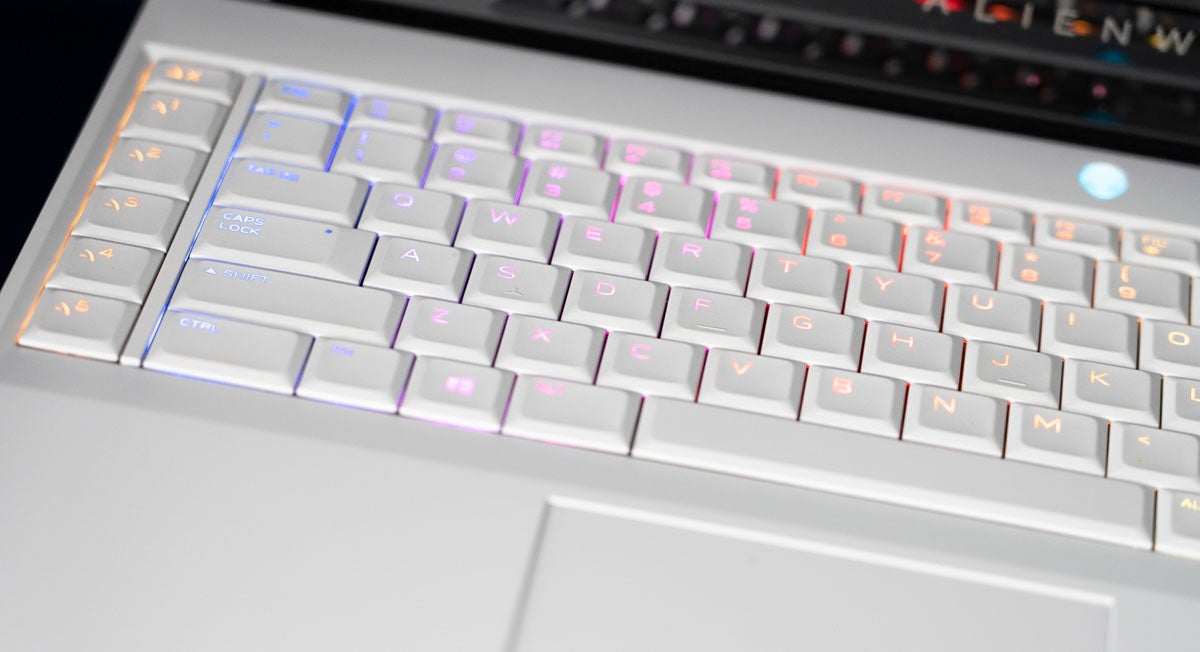 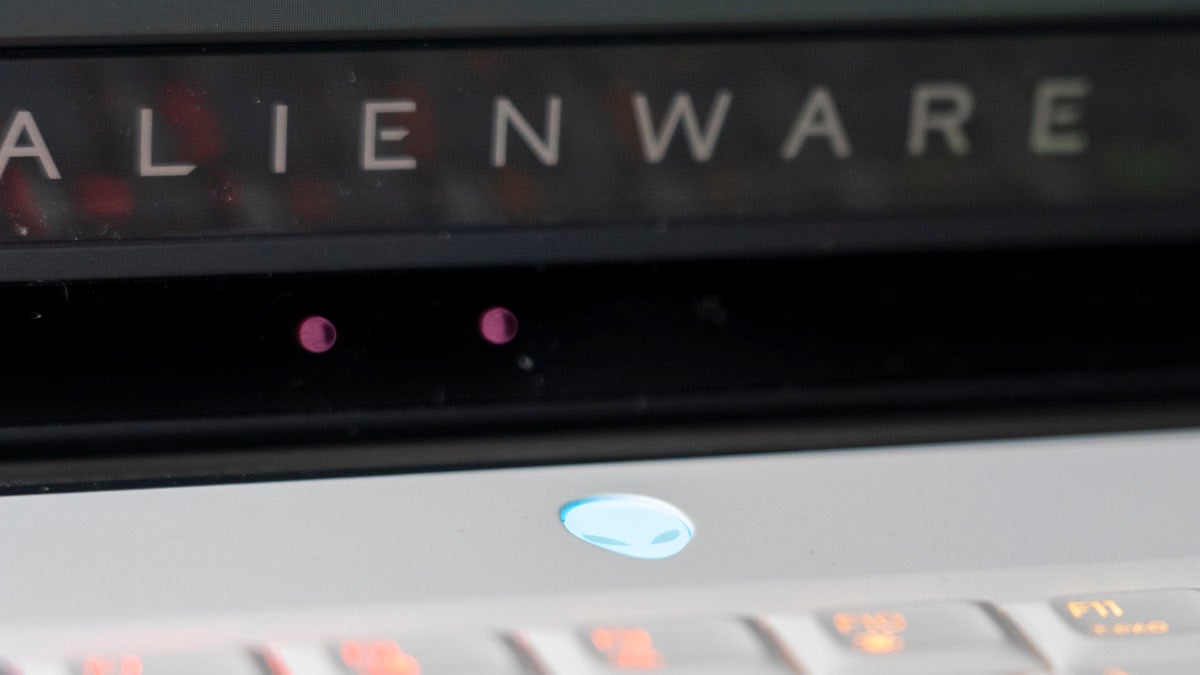 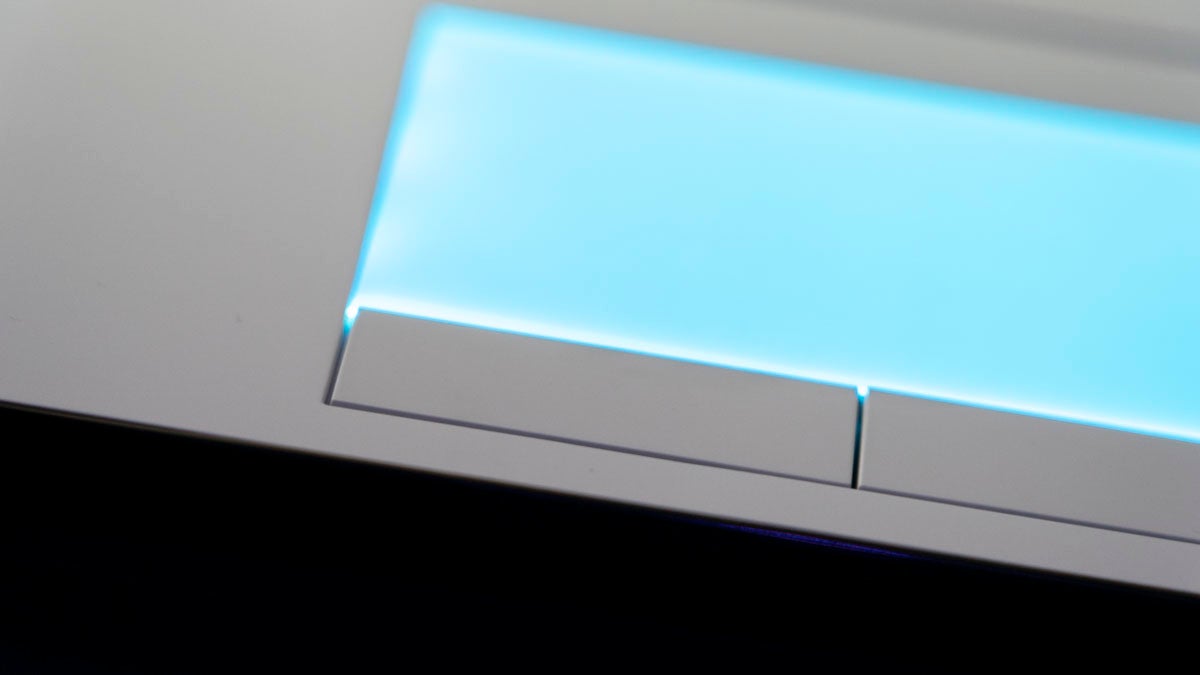 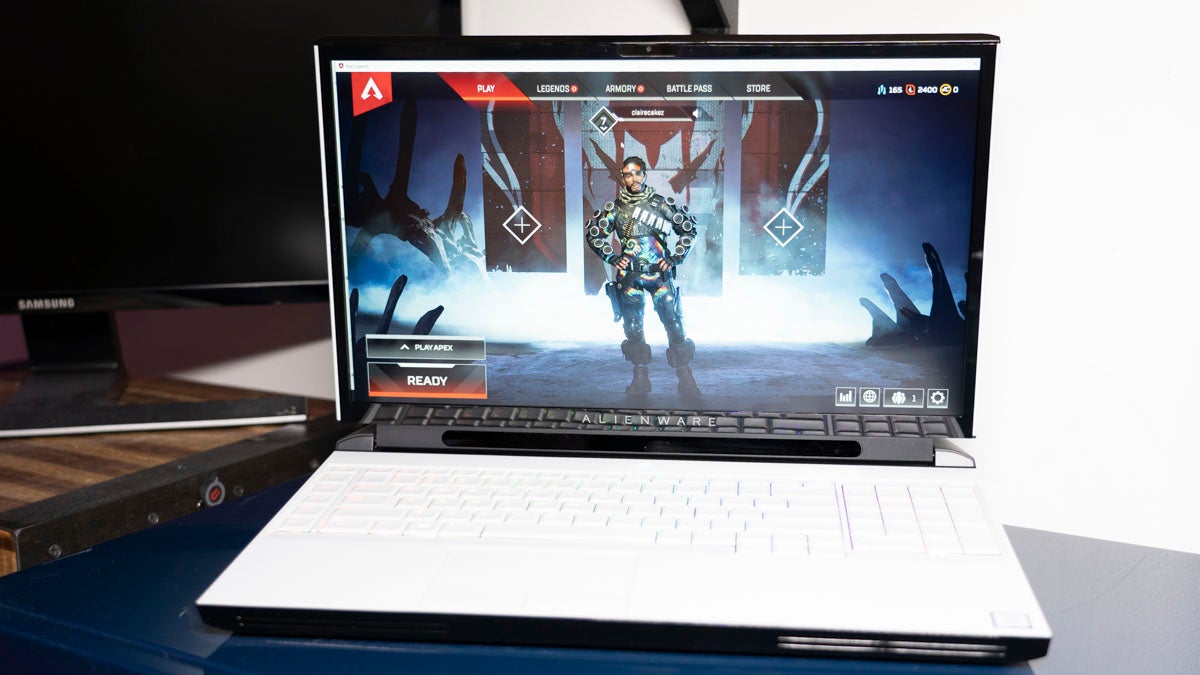 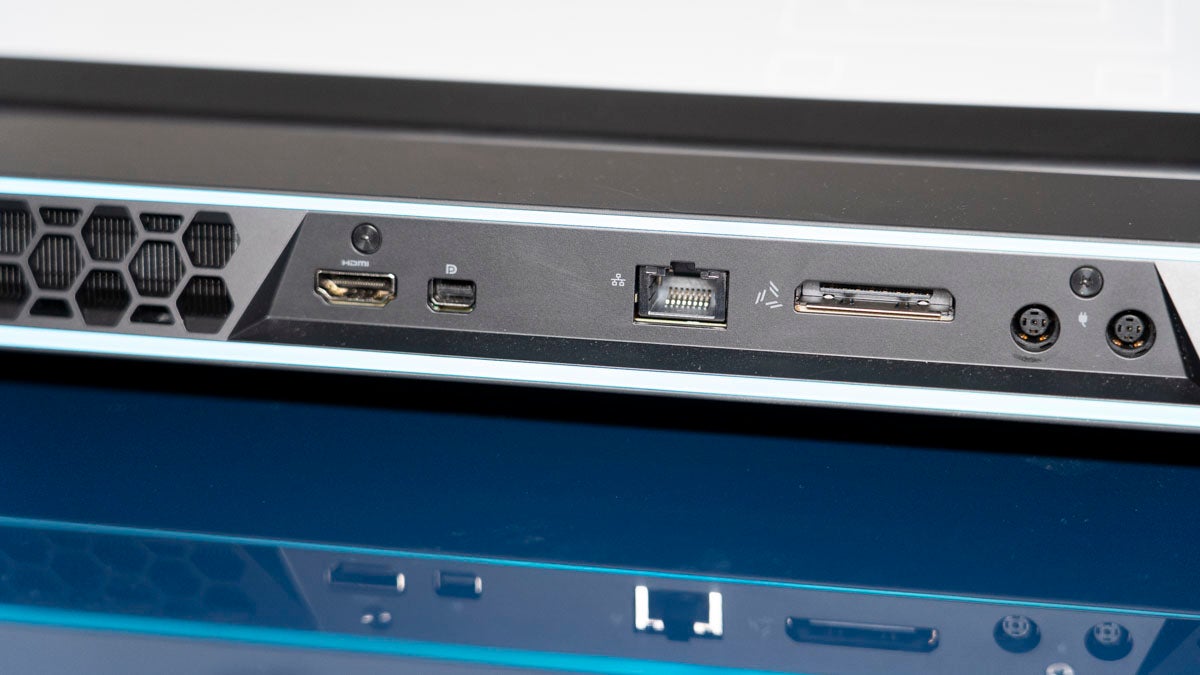 My other complaint is battery life. I couldn’t really get past an hour and a half while playing games, and it takes two hours to charge using not one but two power bricks. That feels pretty unseemly, but I probably shouldn’t moan and groan too much — this thing is using desktop components after all.

The amount of power required to run it would also require some big honking batteries for anything approaching real portable performance. So if you’re planning on playing on the couch, you’ll want a power strip handy.

But lousy battery life and annoying software? Those are my complaints? Yeah. Otherwise, as gaming laptops intended to look like they’re primarily for gaming, this thing is the zenith. It’s well balanced, flashy, and fast.

While I wouldn’t recommend the Area-51m for someone just looking for a solid portable gaming laptop (Razer’s Blade are better choices), I would wholeheartedly recommend the Alienware it’s the undisputed champ for people looking for the very best performance out of a device that can travel. 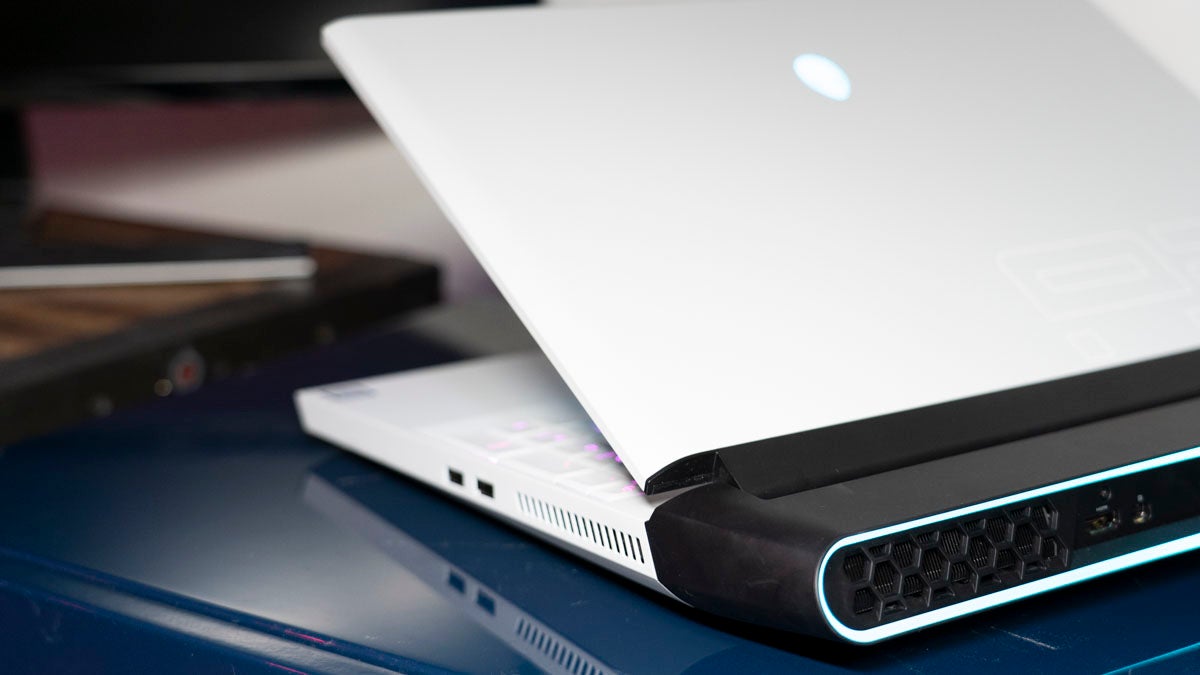