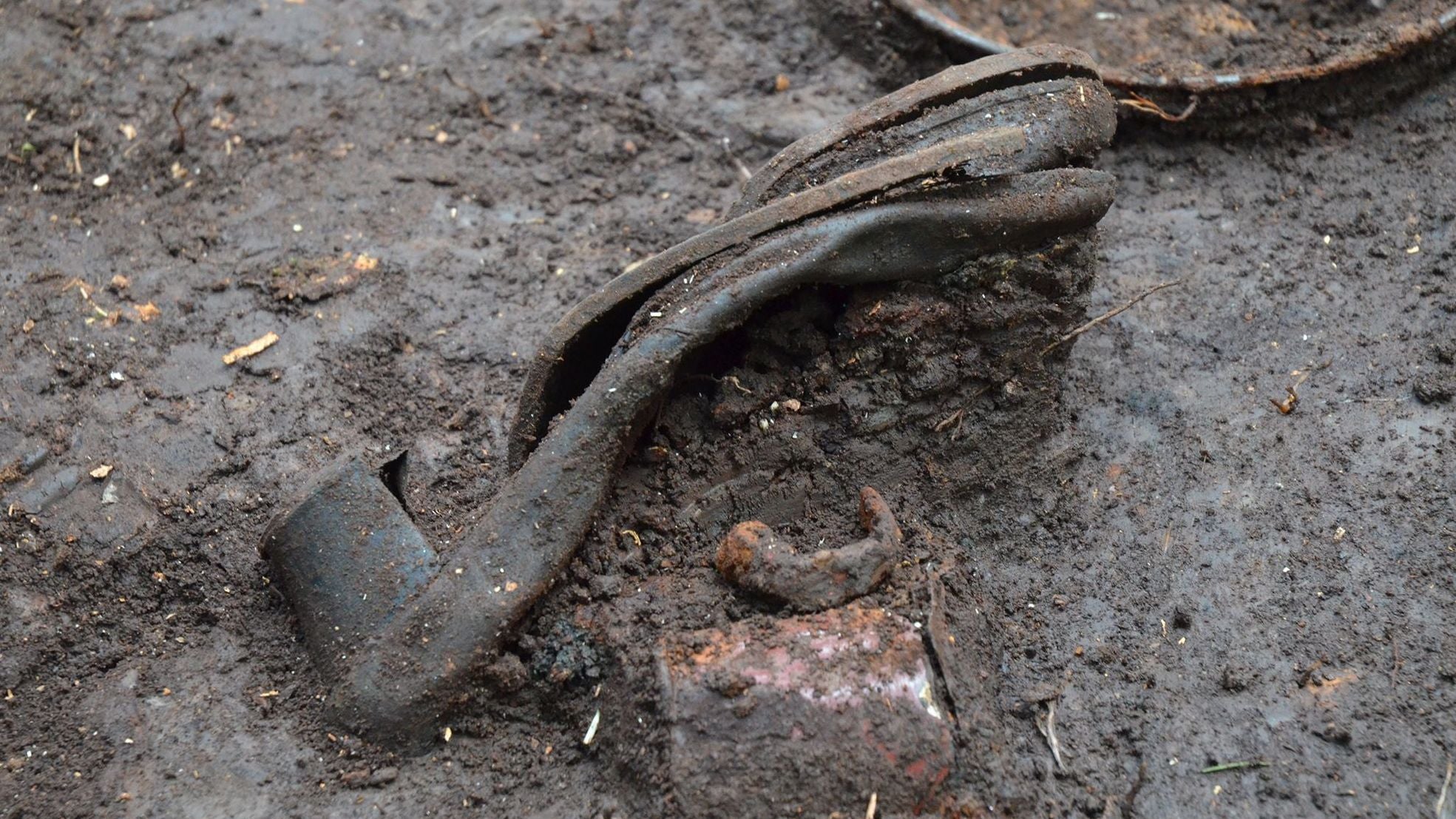 A woman’s shoe found at one of the sites. (Image: LWL/Maria Hahne)

Archaeologists in Germany have unearthed some 400 artifacts dating back to a Nazi massacre in which hundreds of forced laborers were executed during the closing phases of World War II.


The final stages of the Second World War in Europe encompassed some of the worst atrocities seen during the entire conflict, including a grim episode in which German troops were ordered to shoot 208 Polish and Soviet prisoners between March 20 and 23, 1945. The massacres occurred at three distinct locations in the Arnsberg forest in Westphalia, Germany, all of which have been subject to a renewed archaeological investigation headed by the Landschaftsverband Westfalen-Lippe (LWL).

Among the hundreds of artifacts uncovered were shoes, buttons, a spectacle case, a bible, and a harmonica—the meager, but likely precious, possessions of the forced laborers. The findings “not only testify to the last hours in the life of the murdered, but also provide information about the course of the cruel deeds,” according to a LWL press release. The results of the work were presented at a press conference held in Warstein on Friday March 8, as reported in Deutsche Welle. 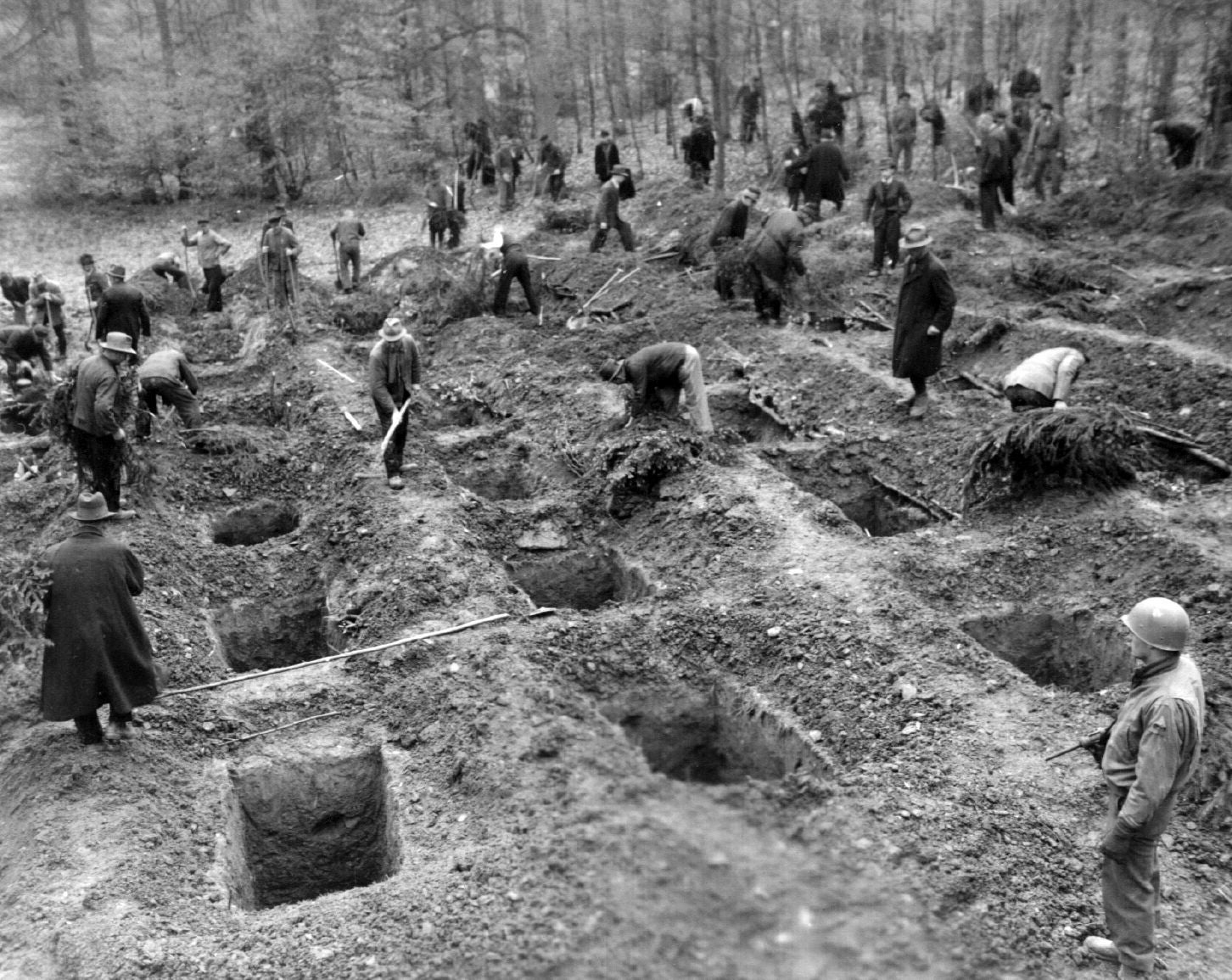 The massacre site near Suttrop soon after it was discovered by Allied forces in 1945. A U.S. soldier can be seen standing guard at far right. (Image: National Archives and Records Administration, Washington)

The German soldiers and officers who committed the massacre were members of the Reprisal Division, a name that speaks for itself. With the outcome of the war all but certain, and as German forces were retreating along two major fronts, Nazi leadership actively worked to prevent as many prisoners-of-war and forced laborers as possible from falling into Allied hands, and to cover up the many crimes committed by the Nazis during the war. The Hitler regime used more than 13 million foreigners as forced laborers during the six-year long conflict.

During the Arnsberg forest massacre in March 1945, members of the Waffen-SS and the German army (the Wehrmacht), under orders from Hans Kammler, a general of the Waffen-SS, summarily executed 208 Polish and Soviet people outside concentration camps and prisons, according to the LWL, which described it as “one of the biggest crimes in the final stages of the war in Germany.” The war in Europe ended less than two months later, on May 8, 1945. To date, only 14 of the victims have been identified.

Two of the three sites were discovered by advancing U.S. troops shortly after the massacre. The dead bodies were exhumed and lined up, and members of the nearby communities were brought to the scene and forced to witness at the Nazi atrocities, the LWL recounted. The bodies were then buried at Fulmecke Cemetery in Meschede. The third site wasn’t discovered until 1946, when an anonymous informer alerted occupying British forces. These remains were exhumed and buried alongside the other massacre victims at the same cemetery in 1947.

These historical accounts are well documented, but less is known about the victims themselves. The recent work at the three sites, which started last year and ended this past January, is shedding new light on this sad episode and those involved. 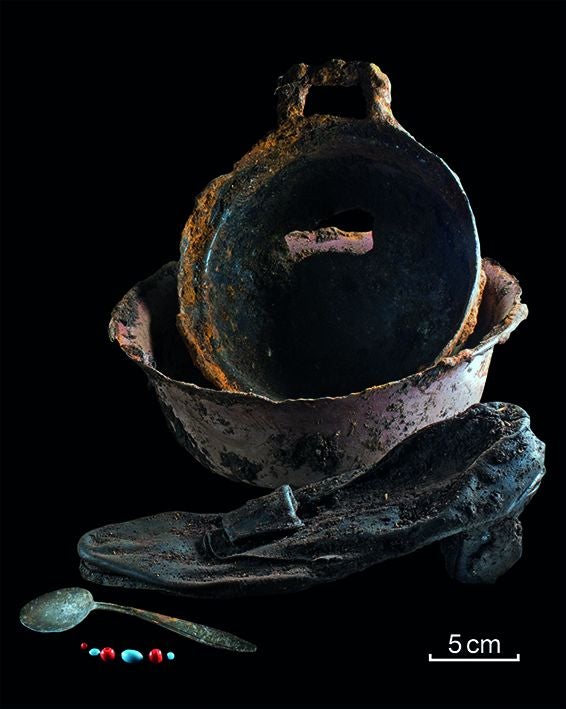 “Inspections with metal [detectors] and the subsequent archaeological excavations… provided further insights into the crime scenes with a large number of finds,” said LWL archaeologist Manuel Zeiler in a press release. “These interdisciplinary and systematic researches have so far been unique at Nazi crime scenes in Germany.”

One of the three sites is located in Langenbach Valley near the town of Warstein. There, 71 people were killed, including 60 women, a child, and 10 men. Under a false pretext, the workers were taken to the forest edge and told to temporarily drop their belongings on the roadside. They were then taken into the forest and shot. The laborers’ clothes were distributed to German citizens nearby, and their cash pocketed by the Reprisal Division. During excavations, the archaeologists found what wasn’t taken—a prayer book, a Polish dictionary, shoes, pieces of clothing, colourful buttons, and sewing beads. Some kitchen tools, such as utensils, pots, and cutlery, were also found.

As the LWL press release also pointed out, the archaeologists also uncovered signs of the perpetrators themselves:

The cartridge cases found prove that the forced laborers were led to a brook slope and shot there. However, some of the projectiles [bullets] were also scattered in the surrounding forest, which means that some of the forced laborers apparently tried to escape and were [executed]. The killers also left behind shovels with which they buried corpses and belongings.

At a second massacre site, at Suttrop near Warstein, the Germans did a better job covering their tracks, but the researchers still managed to find around 50 items. As a ruse, the forced labors were told to dig zigzag-shaped trenches for the army, but in reality they were digging their graves. The 57 workers were told to enter the trenches, where they were shot and buried. 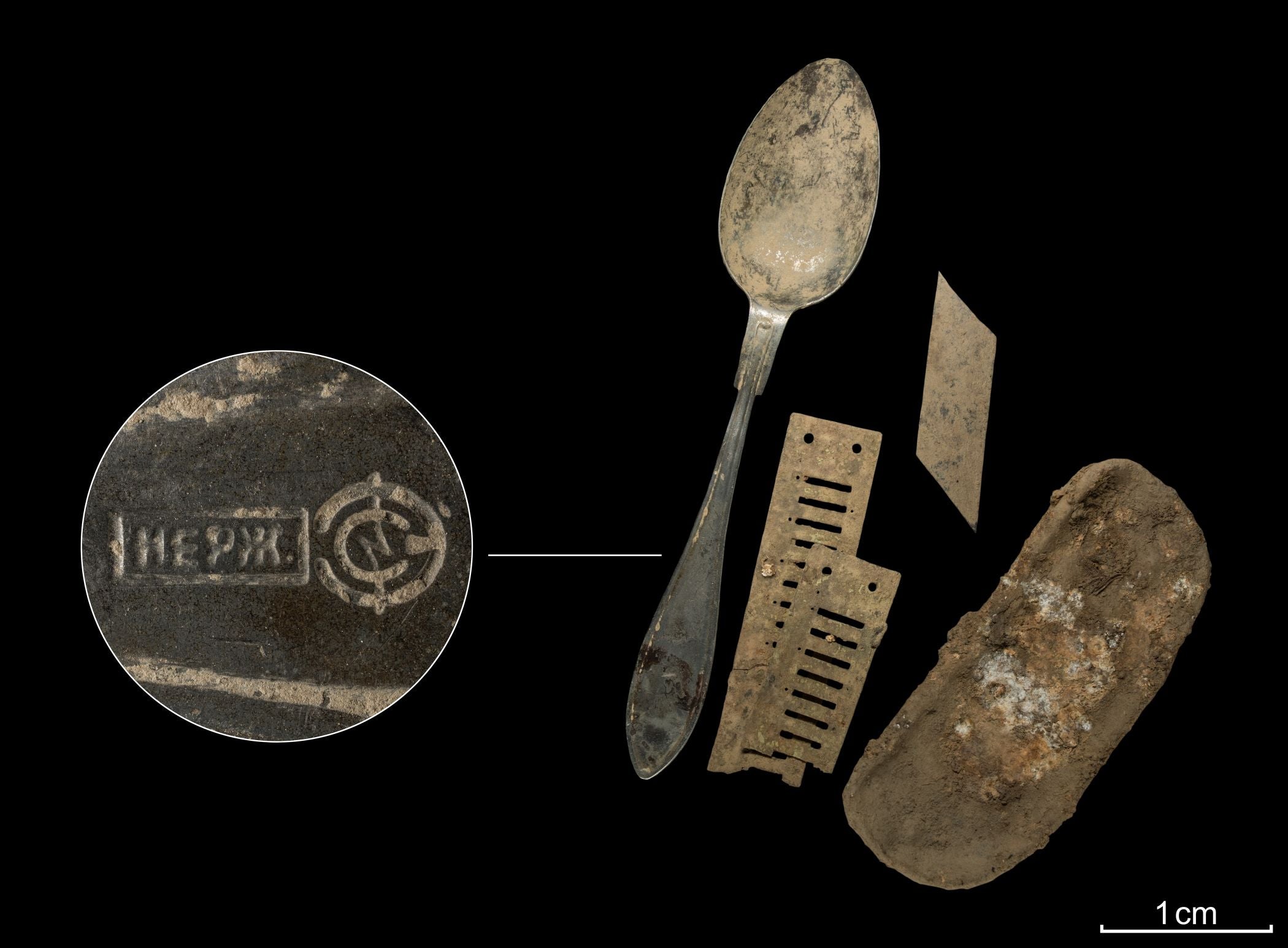 Some of the artifacts uncovered at the Meschede site. (Image: LWL/Thomas Poggel)

The third site in Eversberg near the town of Meschede yielded a harmonica, a spectacle case, Soviet coins, a comb, and a spoon. German soldiers used grenades to blast a pit, within which the laborers were shot. Later, their bodies were concealed under a cow paddock, and were uncovered in 1946 following the informant’s tip.

“The LWL consciously assumes a social responsibility with its research,” said LWL Director Matthias Löb in a statement. “We have been experiencing the trivialization and increasing denial of the crimes of the Second World War and the Nazi dictatorship for several years, but the murders are an example of this part of our history that we have to face.”

Indeed, archaeological work dating back to the Second World War has never seemed more urgent. Finds such as these serve as a grim reminder of what should never be allowed to happen again.