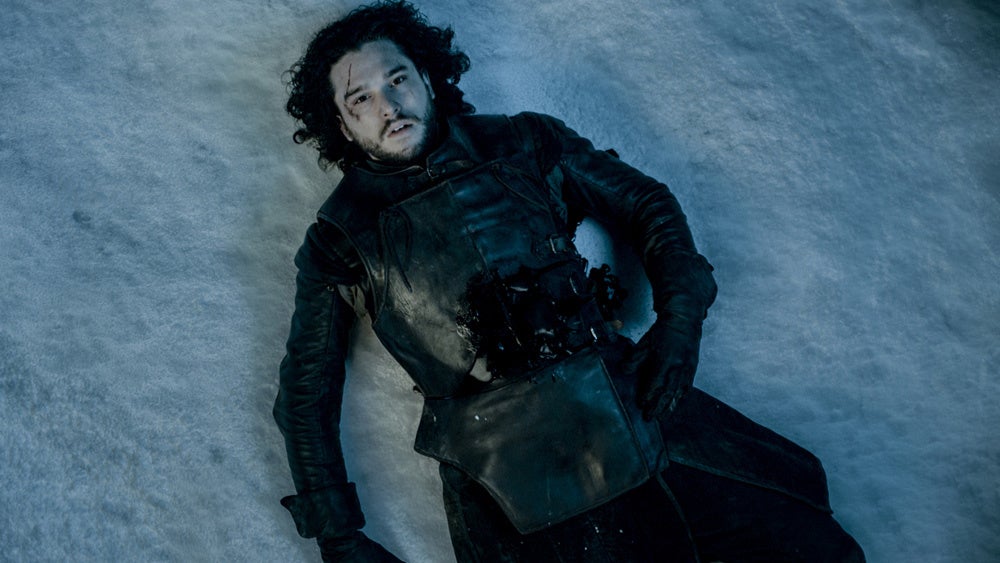 I don’t say this lightly: Jon Snow must die.

I like Jon, and way back in the ‘90s it was a vision of him—decked out in black, with a raven on his arm and a giant white wolf by his side—that inspired me to pick up that first A Song of Ice and Fire novel.

He is the prototypical hero. Joseph Campbell would look at this kid growing from spoiled royal bastard to wise (sometimes) king and say “good job,” because in the last two decades of fantasy fiction there have been few heroes so clearly cut from the model fantasy hero mould.

Which is why Jon has got to bite at some point during the six-part final season of the HBO television show. He’s gotta die because the goal of George R.R. Martin’s book saga is to rewrite the rules of fantasy, and a prototypical hero going from bastard to general to wise king is anything but a rewrite of those rules.

When Game of Thrones first went to print in the late ‘90s, fantasy was in a rut. The books were bold because heroes weren’t safe, villains could win, and everything was terribly hard for everyone. When a hero ended a journey in a place of reprieve it was almost always revealed to be just as deadly as the troubles they’d escaped.

The grimness of Martin’s world has realism elements—though by definition it can’t be realism (dragons kind of keep screwing that up). And its furious rejection of expectations makes it feel post-modern—though it’s technically more of a rejection of post-modernism in fantasy.

Ultimately, what’s crucial to understand is that from the moment Ned Stark dies, these books are about subverting expectations. So when I hear people saying “Jon Snow is going to marry Daenerys and become king and have babies and rule all of Westeros” I’ve got to look at the camera Office style, as that interpretation suggests a gross misreading of the text.

So, allow me to don my nerdiest hat and present my argument.

Jon and Daenerys are on parallel journeys, both on the TV show and in the books. They start with a little power, but warped by their pasts, as bastard and deposed royal respectively. Over the course of the saga they grow in power and learn how to be better rulers. In a traditional fantasy story they’d meet up, fall in love, bang, and rule the seven kingdoms together using their collective earned wisdom.

But at a critical juncture, they both fail. Daenerys is briefly deposed, again, and Jon — Jon actually dies.

Stabbed many many times and turned into a very cold corpse.

The books end there (so far), but in the TV show Daenerys pulls herself up, sets her enemies on fire, and reclaims the power she’d spent the rest of the show earning.

Jon…gets resurrected. Daenerys earns her power back, while Jon has his handed to him. So if there can ultimately be one ruler, it wouldn’t make sense for it to be the guy who died, you know?

And the show seems to know that too, sometimes. Melisandre resurrects Jon because she’s sure he’s a promised leader from a prophecy, specifically Azor Ahai and the Prince That Was Promised.

In the books, Jon’s birth father, Rhaegar Targaryen, also suspects that he, or his eventual son, will be one of these two prophesied heroes. He abducts Lyanna Stark, Ned Stark’s sister, and starts a war because of it. Rhaegar was wrong about the prophecy applying to himself, and he could be wrong about his son!

So could Melisandre. While she likes to speak with a lot of purpose, she is a deeply fallible ancient lady. She murdered a king and made egregious use of shadow babies because she was sure Stannis was a promised leader from a prophecy. Heck, in the show she murders Stannis’ daughter because she’s so sure she’s right.

Then as soon as Stannis dies she gloms onto Jon, desperate to play a role in the prophecy and see it reach fruition. Melisandre is not very good at interpreting prophecies.

And both the books and show call attention to this, noting it actually might be Daenerys that is the Prince That Was Promised and/or Azor Ahai. The reason Melisandre and others fail to believe she could be the subject of the prophecy? Plain old sexism. In the books, no one suspects it could be a woman, apart from Daenerys’s great uncle, and in the show they note that translations always turn the Prince into a guy when the language is gender neutral.

This one really gets me. For some reason, everyone saw two pretty people make the sex in the finale of the last season of Game of Thrones — and decided that because they were pretty and of a similar age and banging, than they’d eventually rule Westeros together.

If you were to, say, point out that Jon is the nephew of Daenerys and they’re actually incesting, people would refer to the centuries of Targaryen incest that produced both Daenerys and Jon. Only…both the show and books have taken a pretty hardline on incest being not great! There’s the framing of Jaime and Cersei’s incestual relationship as unhealthy and destructive.

There’s also the fact that Daenerys’s father was deposed because incest had led to some significant deficits which partially led to his madness and murder sprees.

Much of the story of Game of Thrones is about rewriting the old world because it was impossibly broken. Kingdoms earned by wanton bloodshed are bad, and when women are ignored or overlooked because of their gender terrible things happen. Rape and war and battles for thrones inevitably lead to horrible tragedies for innocent people.

Much of Daenerys’s story is about righting past wrongs and dismantling a broken system to build something better in its place. Pairing her off with her hot dead nephew because they’re Targaryens and their incest is socially acceptable is ignoring all the big signs the story has erected saying that is bad.

Why do you think the show revealed the incest as it was happening? That was supposed to be a moment that left us unnerved and a little repulsed — not hoping for more Targaryen boning.

So, uh, Jon should die to put that ship to rest and keep us from a season of “we’re related but in loooove” angst. 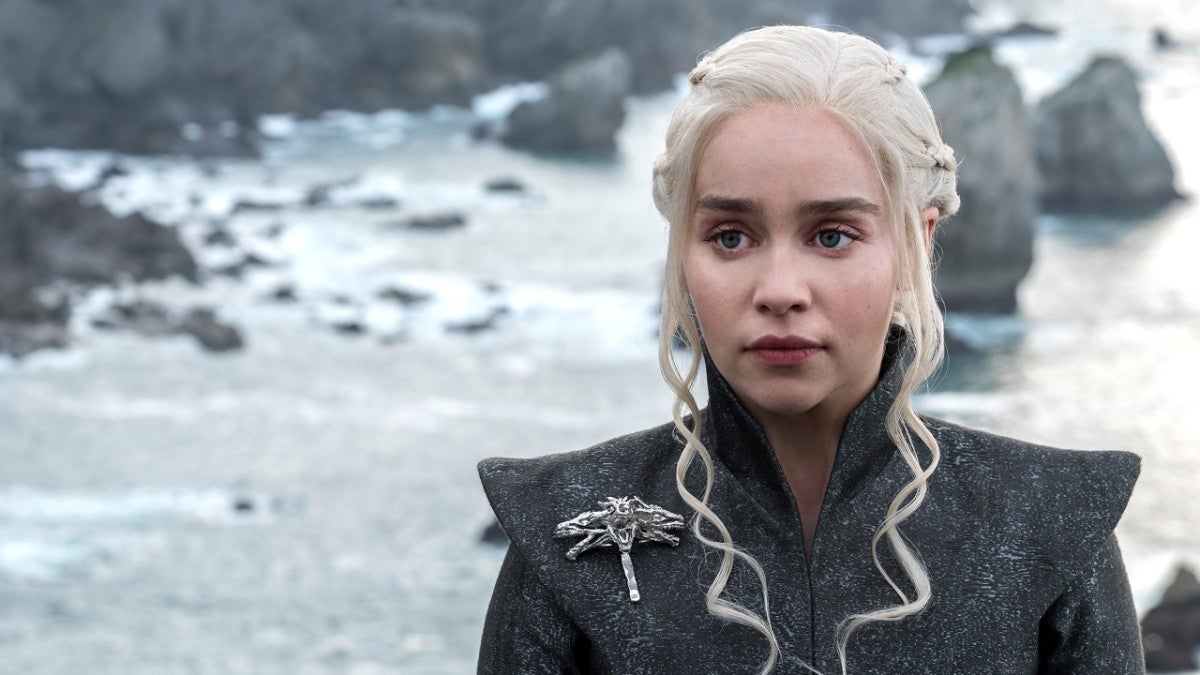 Game Of Thrones' Final Season: A Definitive List Of Everyone Who Will Live Or Die

Valar Morghulis. We're approaching the eighth and final season of Game of Thrones, and we've seen so many deaths over the years. Your Starks, your Lannisters, your zombie babies. And now we're down to a trim, core cast of characters. Except not really. There are still so many people alive on this show who could die in season eight.

But let’s go back to Jon dying and being resurrected. Because both the books and the show have made it clear that resurrection is not a get out of death free card. It comes at a significant price.

In the show, we have a few examples of resurrection: Daenerys’s dragon, who is now an evil zombie ice dragon; all the dead people the white walkers enslave; and Beric Dondarrion, who has died six times and been resurrected each time by Thoros, the red priest. Beric carries heavy scars from his resurrections and tells Arya “Every time I come back I’m a bit less. Pieces of you get chipped away.”

That’s even clearer in the books, where Beric eventually dies so that Catelyn Stark can be resurrected instead. But she’s a vengeful wraith, with a permanently severed throat she has to cover with her hand, and mottled waterlogged skin. They’re sentient, unlike the creatures the white walkers produce, but it is clear the resurrected are on borrowed time and not meant for long lives, let alone happy endings.

The moment Jon died his role in the story was put on a timer. Everything the books and shows have shown suggests there is no happy ending for the resurrected.