The European Union has spent the last year working on a controversial overhaul of its copyright laws and was scheduled to finalise the proposal on Monday. Lawmakers failed to come to an agreement and the legislation is stalled for the time being, but that hasn’t stopped Google from threatening to pull its News service from the EU entirely if the copyright directive eventually passes.

The EU hasn’t updated its copyright laws since 2001 and most people agree that reforms for the age of information are in order. Members of European Parliament (MEP), copyright holders, and big tech platforms are generally in agreement that the bulk of the new EU Copyright Directive is good for everyone. But two sections of the still-in-the-works draft of the legislation have sparked public outcry and intense opposition from activists who believe in a free and open internet.

Article 13 calls for sites to use upload filters to catch copyrighted content before it’s posted online. Article 11 has been called a “link tax” or “snippet tax,” and it gives publishers the right to charge web platforms a fee for quoting or sharing fragments from news articles. Some of the world’s foremost tech experts have warned that these two points would be disastrous for fair use, the free flow of information, user-generated content, small businesses, and even the right to post dank memes.

Google hasn’t been thrilled about the new copyright legislation and it smells blood in the water. According to Reuters, MEPs from Germany and France were unable to come to an agreement on certain carve outs that would exempt some small- and medium-sized organisations from following the portion of the directive regarding upload filters.

That meant that legislators missed their Monday deadline and there are now doubts over whether parliament will be able to work this out before elections in the spring. Google’s team immediately pounced and renewed threats to pull Google News from the EU if the link tax is passed.

Late on Monday, Google’s public policy manager Jennifer Bernal said that Google News may be pulled from the EU entirely, according to a report from Bloomberg. Bernal explained that the search giant’s decision would be based on a reading of the final rules and that the company has several options at its disposal. Google did not immediately respond Gizmodo’s request seeking further details. But we do know that the company has already started running tests of news links in search results with text and images stripped away. It looks really weird: 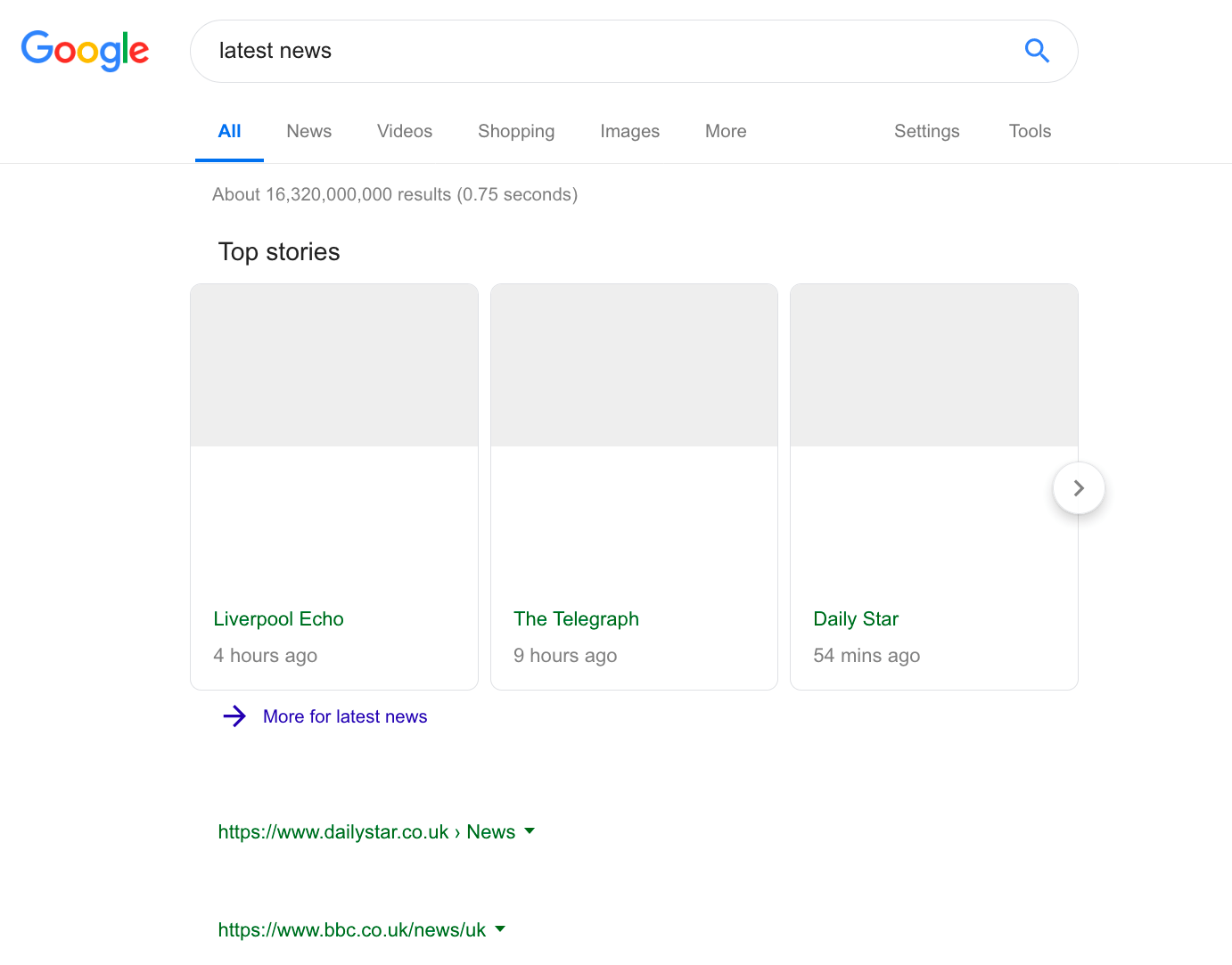 Putting itself in the center of the debate is risky for Google. Its threat to pull Google News could give ammo to supporters of the legislation who argue that it’s designed to return advertising profits to publishers that have been gobbled up by the platforms like Google and Facebook.

A group of publishing lobbying groups that favour the legislation has already responded by saying that Google is engaging in “scaremongering” tactics. “[Google] wants to portray a doomsday scenario that would never happen,” Angela Mills Wade, executive director of the European Publishers’ Council, told Digiday. “It’s an interpretation that is distorted in order to provide a picture which makes it look worse than it is.”

Back in September, it looked all but certain the bill would pass parliament with a little fine tuning. In the meantime, public awareness about the directive has increased and four million Europeans signed a petition opposing Article 13.

Ironically, Google would possibly benefit from the law because it has already invested millions of dollars into building its own content filters and identification systems for platforms like YouTube—at least that’s the argument Tim Berners-Lee, the father of the world wide web, made last June.

The thing is, there’s plenty of evidence that a link tax won’t accomplish its goal of reviving the struggling publishing industry. VG Media, a German copyright-collection group, found that small publishers would receive less than one per cent of the revenue from a link tax and 64 per cent of the benefits would go to the mega-publisher Axel Springer.

Spain has already tried implementing its own link tax and it resulted in Google shutting down its News service in the country. A 2017 study by the Spanish Association of Publishers of Periodical Publications found that the loss of Google News cost publishers around 13 per cent of their web traffic and at least $14 million in revenue.

Above all, critics argue that article 11 and 13 are poorly crafted and don’t take into consideration a wide range of factors that could backfire. The legislative measures risk further segmenting the web into silo-ed versions of itself and could potentially just put more power in the hands of tech giants who could easily, if reluctantly, comply with the regulations.

Julia Reda, an MEP from Germany who has been one of the copyright directive’s biggest critics, said that the latest speed bump in the process “does not mean the end of Link Tax or censorship machines, but it does make an adoption of the copyright directive before the European elections in May less likely.” She credited the legislative impasse to public opposition and encouraged people to continue to make their voices heard.

As for Google, if it really wants to see this bad idea die in parliament, the best thing it can do is shut the hell up.