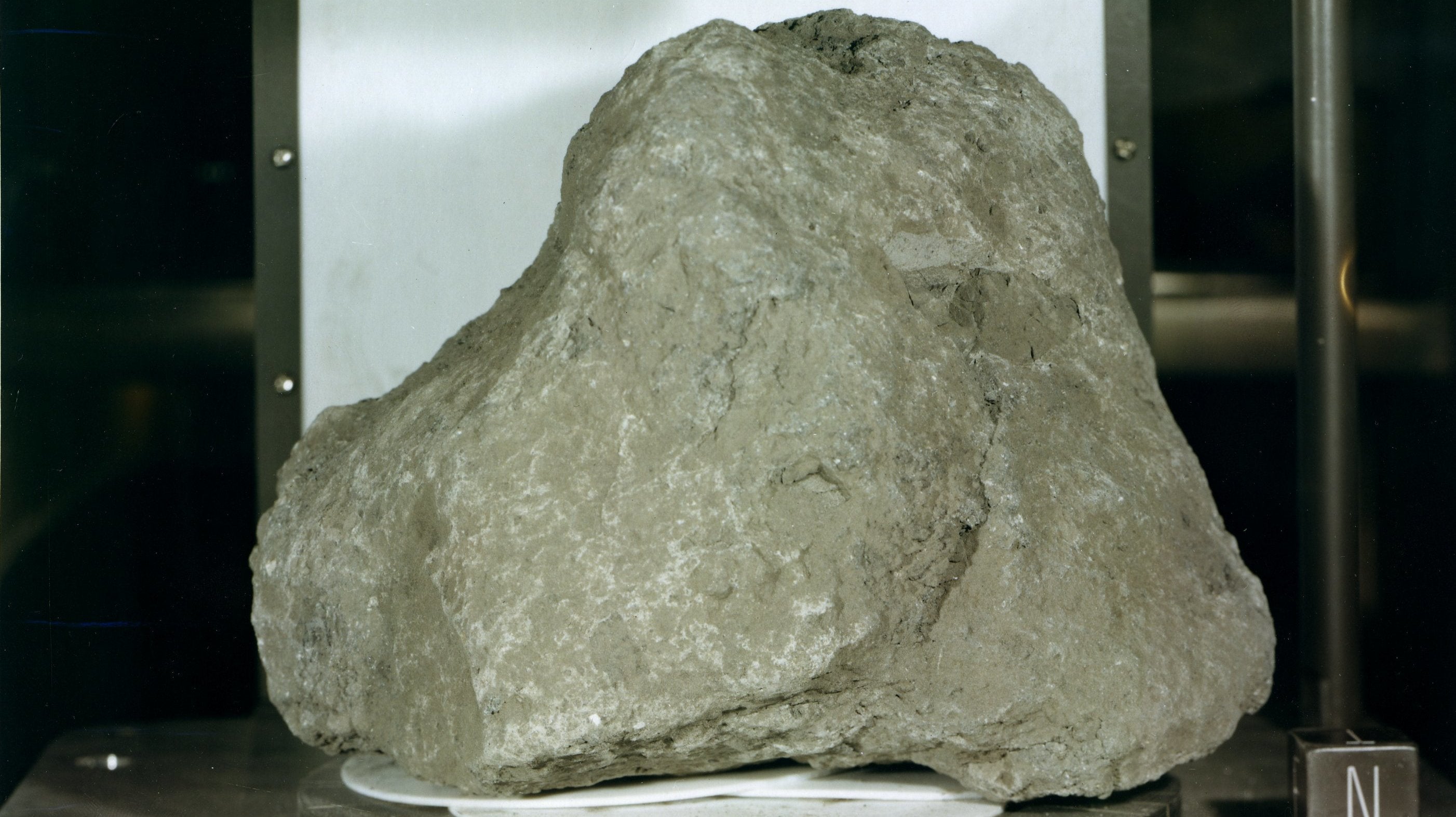 A re-analysis of lunar materials collected during the Apollo 14 mission has resulted in a rather astonishing conclusion: One of the rocks brought back appears to contain a small chunk of Earth dating back some four billion years. Incredibly, it’s now amongst the oldest terrestrial rocks known to exist.


New research published this week in Earth and Planetary Science Letters is claiming that a rock fragment embedded within lunar sample 14321 — a 900g rock known as Big Bertha — is of terrestrial origin. The fragment likely reached the Moon’s surface after an asteroid or comet smashed into the Earth, flinging debris into space.

The lead authors of the new study, Jeremy Bellucci from the Swedish Museum of Natural History and Alexander Nemchin from Curtin University in Australia, say this happened around four billion years ago during the Hadean Eon — a time when the fledgling Earth was regularly struck by large objects.

Big Bertha was collected by NASA astronauts Alan Shepard and Edgar Mitchell in 1971 during the Apollo 14 million to the Fra Mauro formation. This rock, along with other lunar samples, are stored at the Lunar Curation Facility at the Johnson Space Center in Houston, Texas. Sample 14321 is special in that it’s a clast-rich, crystalline matrix breccia.

“In layman’s terms it means this is a rock made from a jumble of previously existing rocks and rock fragments, as well as melt and impactor material formed during a large impact or series of impacts on the Moon,” James Day, a professor at the Scripps Institution of Oceanography who wasn’t involved with the new study, told Gizmodo.

“The sample has been described as a ‘treasure trove’, containing a multitude of clasts of rocks.”

Katie Robinson, a postdoctoral fellow at the LPI-JSC Center for Lunar Science and Exploration and a co-author of the new study, said sample 14321 has been recognised as being unusual for a long time — and only now are we appreciating how unusual it really is.

Packed within this lunar breccia is a 2g felsite clast — fine-grained volcanic rock — containing felsite fragments, including quartz, feldspar and zircon. These materials are commonly found on Earth, but are very uncommon on the Moon. And indeed, a chemical analysis of the sample suggests it formed under terrestrial, rather than lunar, conditions.

“What we did was use the composition of minerals in the fragment to show it formed under conditions that only occur on Earth,” Robinson told Gizmodo.

“For example, the composition of certain minerals are sensitive to temperature and pressure; they contain more or less of various elements if they crystalise in hot or cool, and/or deep or shallow environments. Other minerals can indicate if the rock formed in the presence of lots of oxygen, or in a very oxygen-poor environment.

“Our data shows that this fragment formed in a higher pressure, more oxygen-rich, and lower temperature environment than occurs on the Moon. Essentially, it had to come from an Earth-like environment.”

The Moon just happened to have an Earth-like environment next door in the form of the Earth.

That an ancient asteroid strike could have thrown chunks of terrestrial debris into space and onto the Moon’s surface is not a ridiculous idea. Back during the Hadean, asteroids regularly produced craters thousands of kilometres in diameter. Impacts of this magnitude were capable of pulling out materials from deep within the Earth’s surface. The apparent terrestrial fragment found within Big Bertha formed around 20km below the Earth’s surface — a depth not out of reach for these ancient asteroids.

Another possibility, according to the new research, is that the fragment crystallised on the Moon. But for this to happen, the material had to have formed deep within the Moon near its lunar mantle, and there’s no good reason for it to reach the surface. The simpler explanation, the researchers said, is that it came from Earth.

Speaking of the lunar surface, it seems surprising that the Apollo astronauts were able to find this breccia so easily. Indeed, billions of years of steadily accumulating lunar dust, known as regolith, should have obscured traces of this rock.

But as Robinson explained, Big Bertha was covered in regolith, just not enough to bury it completely. To explain its presence on the lunar surface, she said the breccia was once buried, but it returned to the surface following an impact that formed Cone Crater, a 300m crater near the Apollo 14 landing site — a “very common process on the Moon,” she added.

A fascinating aspect of this discovery is that this lunar sample of apparent terrestrial origin is truly ancient. At an estimated four billion to 4.1 billion years old, the terrestrial zircon mineral found in the sample is now among the oldest known to exist. A Universities Space Research Association (USRA) press release went so far as to proclaim it “Earth’s oldest” rock, but that’s not entirely accurate, as Matthew Dodd, a geologist from University College, London, explained.

“The age of the zircon mineral found in the lunar sample is quoted as circa 4.01 billion years old, which makes it a very old piece of Earth (if this research is correct), but it’s not the oldest,” Dodd told Gizmodo. “There are zircons on Earth of 4.4 to 4.3 billion years old which come from western Australia.”

The authors of the new study presented two possibilities to explain the anomalous sample: Either it formed on Earth (very likely) or it formed deep within the Moon (highly unlikely). But Day said the researchers missed a third possibility.

“That’s that these unusual characteristics are the result of impact processes on the Moon, without the need for having these rocks arriving from Earth,” he told Gizmodo.

“During formation of melts by impacts, conditions can be obtained to generate the unusual trace element chemistry of the zircons, but this possibility is not considered by the authors, even though these felsite clasts have textures consistent with being melt rocks, including melting and brecciation.”

Day said his scenario seems more plausible compared to the “required chain of events of [breaking] felsite from the Earth at very high impact pressures so that it can escape Earth’s orbit, and then incorporating it in a lunar impact melt rock”. The felsite clasts, he said, are just about the right age for “some of the earliest recorded large impacts on the Moon, making a lunar origin more likely”.

For the authors of the new study, this kind of pushback or criticism is not unexpected. As noted in the USRA press release, the researchers were fully anticipating that “the conclusion of a terrestrial origin for the rock fragment will be controversial”.

When reached for comment, Bellucci said some of his peers are likely to be sceptical simply because the samples were found on the Moon. But he said the “best explanation for our data presented in the paper is a terrestrial origin for the clast we analysed”, adding that as far as he and his colleagues know, “we have done the best job we could have done to confirm a terrestrial origin”.

To which Robinson further elaborated: “We know from dynamical calculations that samples of the Earth definitely were ejected during impacts and reached the Moon, but the challenge is in recognising them.”

“This is only the first rock identified as a terrestrial meteorite. The more we find, the better we will get at identifying them!”

Despite Day’s reservations, he said the new study is important in that it highlights the need for future missions to study the formation of the Moon.

“Going back to the Moon to understand how it formed, and how our own planet formed would be a scientific boost, just as the US Apollo and Soviet Luna missions to the Moon were back in the late 1960’s and early 1970’s,” said Day. “After all, as this paper shows in 2019, we are still making discoveries about the Moon from rocks collected 48 years ago.”