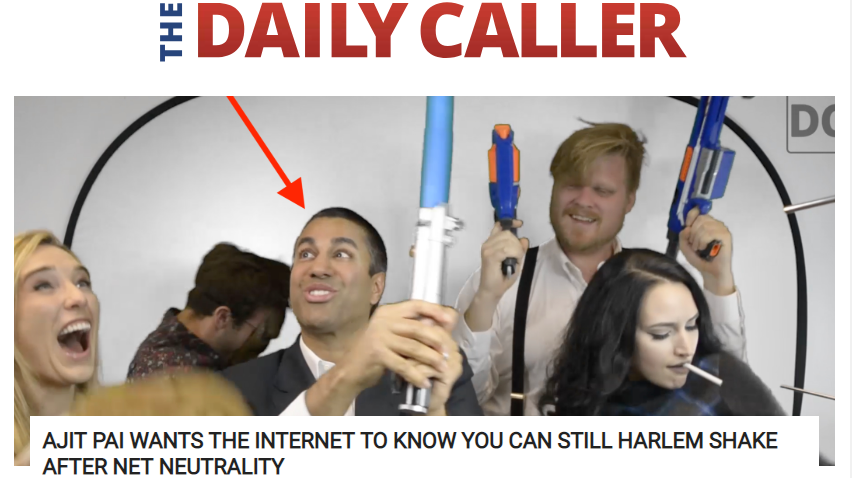 Of all the controversies surrounding the FCC this year, Chairman Ajit Pai’s appearance in a Daily Caller video dancing alongside a woman who had pushed Pizzagate conspiracy theories was perhaps the easiest to avoid.

Despite Pai’s failings, it always seemed unlikely that he would intentionally position himself next to someone who advanced the theory that, predictably, led an InfoWars stan to shoot up a D.C. pizza shop. So naturally the question has always been: Whose fuck up was this really?

Until now, the FCC has fought to keep any records related to the video under wraps, misapplying exemptions under the Freedom of Information Act and needlessly dragging out the mystery.

Faced with the prospect of being legally challenged over its refusal to release the records, for no purpose other than to save itself from a spat of humiliation, the agency finally unredacted a few of its exchanges related to the Daily Caller video.

Ajit Pai Wants The Internet To Know You Can Still Harlem Shake After Net Neutrality Is Gone pic.twitter.com/IvCXv1fEZq

One of the emails, published first by MuckRock on Monday, appears to implicate Pai’s own chief of staff, Matthew Berry, in this entirely avoidable fuck up.

On November 11, 2017, citing his need to attend to actual work that didn’t involve watching Pai dance around with a toy lightsaber, Berry wrote in an email that he wouldn’t be joining other FCC staff at the Daily Caller’s offices for its production. “But I will want to see the video and make sure we have veto rights before it is released,” he said.

Daily Caller News Foundation Editor-in-Chief Christopher Bedford recently told Gizmodo that the company was unaware of Markota’s “Pizzagate crap” prior to the video’s release. (Markota reportedly told Buzzfeed, “Embrace the mystery,” when asked if she believed in Pizzagate, only to later say in a statement, “I have never believed in the Pizzagate conspiracy theory, and I have never said in any online video that I am a believer in the conspiracy theory.”)

Moreover, Bedford told Gizmodo today that Berry’s request for final approval over the video was never actually relayed to the Daily Caller. “And if it had been, we wouldn’t have honored it,” he said.

The video itself stands as a fairly obnoxious effort by Pai’s team to reduce the complex and serious debate over the future of internet regulation down to a particularly insufferable meme. Never mind that the FCC missed the “Harlem Shake” boat by about two and half years.

Pretending to respond to nonexistent arguments (literally no one has claimed overturning net neutrality would halt the release of new shitty Harlem Shake videos) is a hallmark of Pai’s leadership style. Currently, he’s touting the fact that the internet has not imploded as evidence that his repeal was the right move, though no one serious has ever claimed it would result in some immediate and irreversible disaster.

Citing a slew of legal experts, in fact, Gizmodo reported a month before the vote that internet providers were likely to play it safe while the FCC’s decision was being considered on appeal. A judge might’ve been inclined to issue a stay on Pai’s order if the companies suing him were able to demonstrate any imminent and irreparable harm resulting from the repeal.

Companies like AT&T and Verizon have seen this all go down before and they know there are several ways Pai’s repeal might eat shit down the line, regardless of how the lawsuit ends. There may be legislative efforts to reenact net neutrality next year and, of course, a Democrat could replace Pai in two years’ time.

The real controversy here has nothing to do with Pizzagate, or that a senior government official wanted “veto” power over content produced by a conservative news outlet. The real problem is that the FCC tried to hide a batch of relatively benign emails from the public simply because they related to something embarrassing for the chairman.

While one could argue that the FCC somehow misinterpreted its statutory obligation to release these emails in response to a FOIA request, in the end, what’s more likely: that the agency is abusing its authority to help bury the embarrassing mistakes of its senior officials, or that it is incapable of understanding the limits of its power to withhold documents from the public?