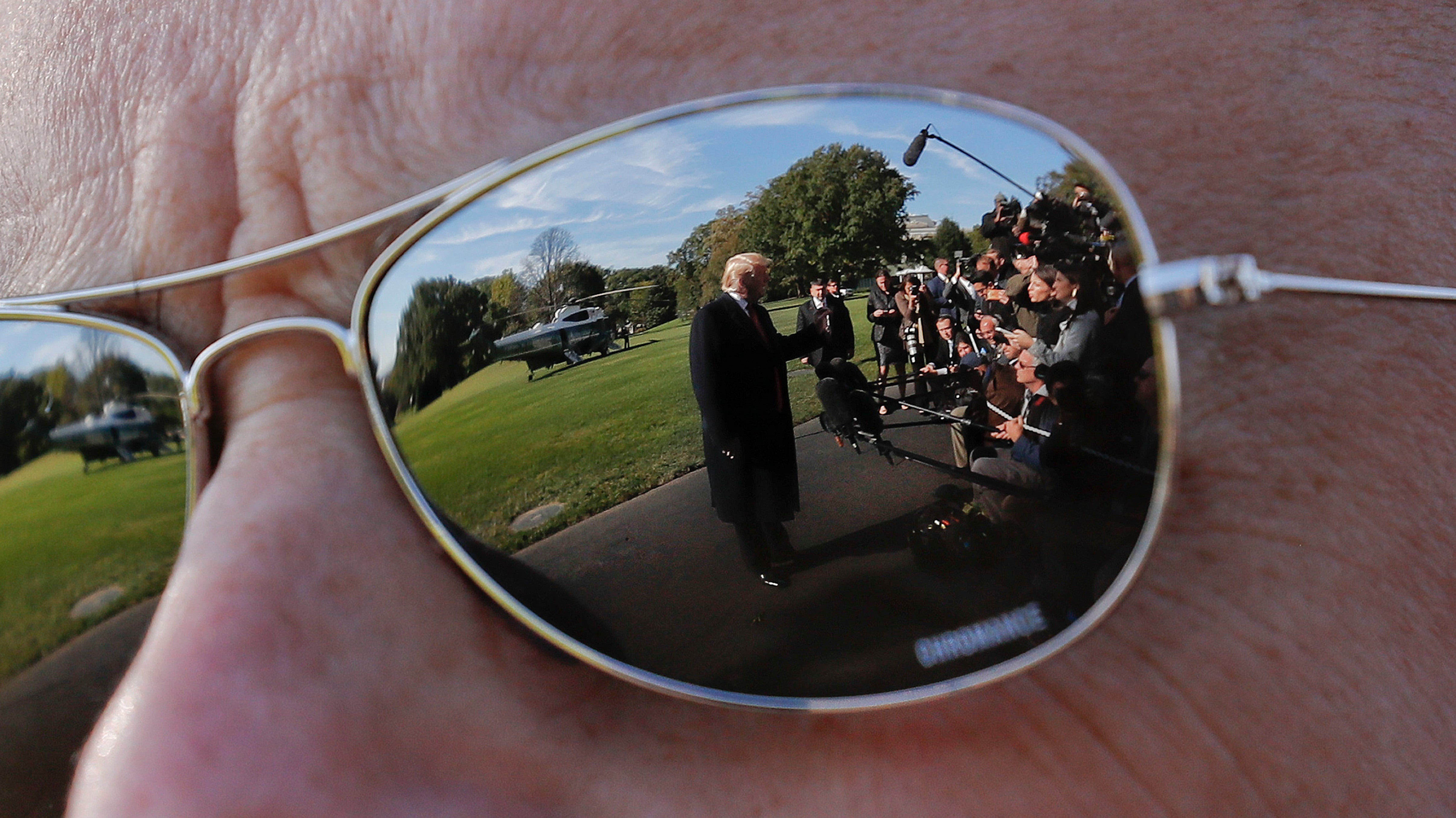 President Donald Trump on the South Lawn of the White House in October 2018, as seen reflected in the sunglasses of a Secret Service agent. (Photo: Pablo Martinez Monsivais, AP)

The Secret Service is testing a facial recognition system in public areas of the White House and surrounding grounds with the stated goal of “identifying known subjects of interest prior to initial contact with law enforcement at the White House Complex,” according to Department of Homeland Security documents dug up by the American Civil Liberties Union.

The test is described in the documents as running from Nov. 19th, 2018 to Aug. 30th, 2019, and will entail scanning closed circuit video feeds of volunteer staffers “from two separate locations on the White House Complex… [including] images of individuals passing by on public streets and parks adjacent to the White House Complex.”

The documents say that footage matching subjects of interest will be flagged for confirmation by humans. While the video footage will be destroyed within 30 days of recording, matching facial images extracted from the footage will be retained until the end of the pilot, and non-matching records will be “immediately destroyed.”

The cameras are capable of capturing viable images for facial recognition purposes up to around 18.29m, the documents say:

One of the areas selected for the FRP is in an open setting, where individuals are free to approach from any angle, and where environmental factors will vary (e.g., lighting, distance, shadows, physical obstructions). The second area of the White House Complex provides a controlled flow of individuals, which will be in a lighted area and free from other obstructions. For both locations, the technology used in the FRP will have the ability to capture facial images out to approximately 18.29m.

The proposal also acknowledges that there is a slight risk of privacy violations as members of the public who will be inadvertently recorded using the system “cannot opt-out of the Facial Recognition Pilot testing”:

This risk is not mitigated. The White House Complex is a highly monitored
area with existing CCTV capabilities. Individuals passing the cameras involved in the pilot will
not be able to opt out of having their faces run against the facial recognition algorithm. However,
individuals who do not wish to be captured by White House Complex CCTV and cameras involved
in this pilot may choose to avoid the area.

Additionally, the documents stated that the entire facial recognition database will be stored in facilities at the White House that cannot be accessed remotely, while only authorised Secret Service personnel will be cleared to view it.

The ACLU argued that while the test seemed relatively benign and serve a legitimate purpose (the protection of the president), it normalizes “facial recognition as a blanket security measure” and opens the door to “mass, suspicionless scrutiny of Americans on public footpaths” by government agencies:

Face recognition is one of the most dangerous biometrics from a privacy standpoint because it can so easily be expanded and abused — including by being deployed on a mass scale without people’s knowledge or permission. Unfortunately, there are good reasons to think that could happen. The Secret Service envisions using the technology to provide early warning about “subjects of interest” who are approaching the White House “prior to direct engagement with law enforcement.”

The civil-liberties group also noted that the Secret Service does not disclose exactly how it defines a “subject of interest,” just what factors it may take into account while doing so. For example, the label could include protesters near the White House complex.

It also warned that without congressional oversight to limit the practice, the Secret Service could use the technology in the future to monitor people far away from the immediate area of the building—such as the entirety of downtown DC, or potentially anywhere individuals who receive Secret Service protection travel.

The use of facial recognition technology by law enforcement agencies across the country is growing, despite technical issues like false positives and the possibility it could be used to entrench racial bias.

A 2017 Georgetown Law report on the Department of Homeland Security’s $1 billion “Biometric Exit Program,” which requires some international travellers to submit to face scans in the hopes of fighting identity fraud, concluded the program was rife with technical flaws and may not be legal.

Tech giant Amazon has attracted congressional attention for Rekognition, a facial recognition tool that has already been in use by police and which the company pitched to Immigration and Customs Enforcement officials.

Customs and Border Protection announced a pilot program at the U.S.-Mexico border earlier this year. After a gunman rampaged through the offices of Maryland newspaper company Capital Gazette in June 2018, killing five people and injuring two, authorities identified the shooter using the controversial Maryland Image Repository System (MIRS) after other methods failed.

Right now, it’s unclear whether the Secret Service test is currently in operation. An agency spokesperson told the Verge, “For operational security purposes we do not comment on the means and methods of how we conduct our protective operations.”