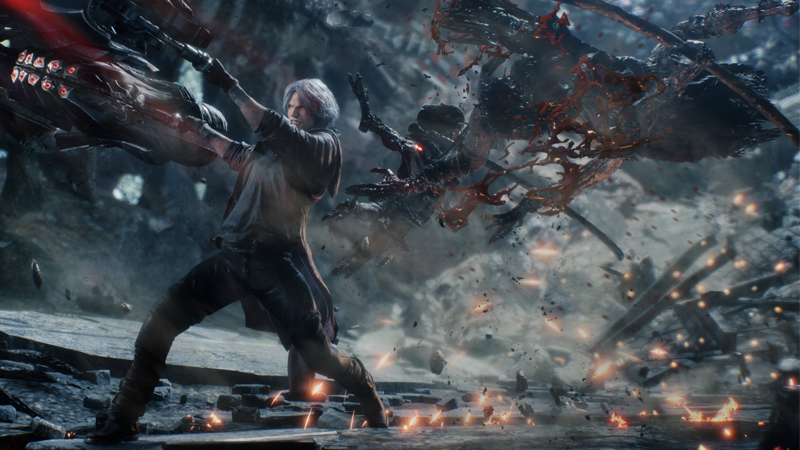 Dante in action in the upcoming fifth main title in the franchise. (Image: Capcom)

Yes, you read that correctly. Announcing the news through IGN, Adi Shankar — known for producing Netflix’s Castlevania series, one of the best video game adaptations around — has confirmed that his next animated project is an adaptation of Capcom’s iconic action game series Devil May Cry.

The series has had multiple protagonists across the franchise’s five main games (and a rebooted spinoff).

But perhaps most famously, it follows the escapades of Dante, the son of a demon lord named Sparda that spends his days using his superhuman abilities — and his trusty handguns, named Ebony and Ivory — to battle demons as a mercenary, on a quest to avenge the death of his mother and the corruption of his brother, Vergil. After the news broke, Shankar tweeted a picture of himself in cosplay as Dante to celebrate:

Not much is known about Shankar’s plans for Devil May Cry right now — not even a distributor for the series was mentioned in IGN’s interview, although Shankar added that he personally has a stake in the rights to the adaptation so that “the jabronis in Hollywood don’t fuck this one up too,” which is a rather colourful way of putting it.

It’s not the first time that Devil May Cry has made the leap to animation — Madhouse developed an anime adaptation of the series way back in 2007 — but the idea that Shankar and his team see Devil May Cry existing in the same “bootleg multiverse” as the Castlevania series is an interesting one. Maybe don’t expect Dante to go on an adventure with Trevor and the crew, but it probably tells us what we can expect tonally out of the series.

A Devil May Cry adaptation makes sense, given how Shankar championed Castlevania for Netflix, and managed to balance the delicate tightrope act most video game adaptations tend to falter on, between catering to diehard fans of the source material and telling a compelling story to draw new people in.

It also helped that Castlevania was a wild blast of gory fun to boot, an approach that will be very much in line with Devil May Cry‘s roots of over-the-top, stylish action that didn’t shy away from spilling a litre or six of monster blood along the way.

It’ll be interesting to see how it all plays out. Shankar is onto something with Castlevania, but part of what makes that work is the team he cultivated — both the animators at Powerhouse and Warren Ellis as writer — for it. If he can find another combo like that, Devil May Cry fans could really be in for a treat. We’ll bring you more on the DMC animated series as we learn it.