Tesla Model 3 Owner Recharges Car By Having It Towed 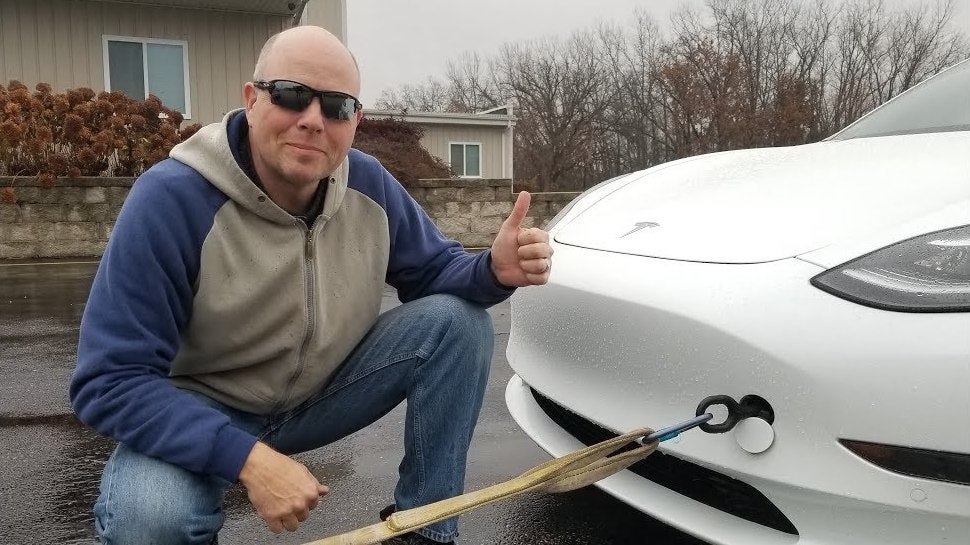 The Tesla Model 3, like most electric vehicles, uses regenerative braking to help trickle charge the car’s battery and extend the range. In theory, one could use the regenerative powers of the car’s motors to charge the battery by having the whole thing towed, and now a Model 3 owner has put that to the test.

While this is definitely NOT how it was designed to work, pulling an electric car with another car to charge it isn’t exactly against any rules. As Electrek picked up, Tech Forum on YouTube wanted to see what exactly would happen if he tried it, towing a Model 3 with a Ford C-Max hybrid.

This is Matt’s second tow test, since the first was before the version 9 software was released which unlocked stronger regenerative braking on Teslas, and he also wanted to do it for a longer leg to see more significant results, so he tried it a second time.

The car started at 365km of range, creep mode was turned off, and around the 4:20 minute mark you can see the impact of towing on the car’s energy consumption graph.

As the towing begins, you see the energy consumption drop almost immediately to the bottom of the graph as the projected range rapidly climbs. After one mile of towing, the car managed to drive itself a further 16km theoretically just off of the energy “conserved” by towing the car.

When I reached out to Tesla about this, they labelled this way of recharging the car creative but not very feasible, mostly due to the increased risk of towing a car with a strap like this at higher speeds for the long periods of time necessary for a decent charge. The company officially recommends towing Teslas by flatbed truck. Also, keep in mind the car needs to be “on” for the regen to charge appropriately. But it’s possible!

Think of the possibilities… Tesla Semis pulling giant cargo containers that are just giant batteries, or maybe even miniature power plants of some future efficient design, for all of us to pull up behind on the highway, link up with and enjoy a nice regen charge before our exit. Somebody pay me for this plan. Thanks.