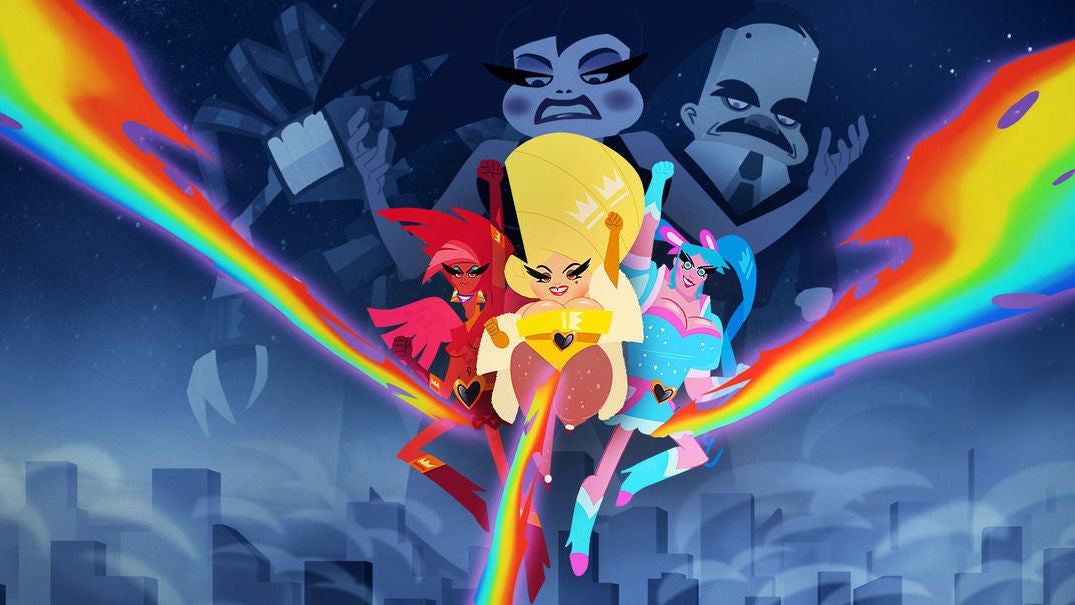 Even though the advertisements for Netflix’s latest superhero series, Super Drags, are all drenched in oversaturated colours and sparkles, there’s a reason the network has been so bullish about drawing attention to the show’s parental advisory warnings. For all the homages to classic hero cartoons like the PowerPuff Girls and Sailor Moon, Super Drags isn’t at all a show meant for kids.


The Netflix original comes by way of Brazilian creator and artist Anderson Mahanski. Super Drags tells the story of Ralph, Patrick, and Donziete, three unassuming department store employees who lead secret lives as superpowered drag queens tasked with protecting the world’s magic from nefarious, homophobic villains. Each Power Rangers-esque episode finds the boys facing off against a new monster of the week with designs on sapping unsuspecting civilians of their “highlight”—the intangible essence that gives people their inherent light and creativity.

That aspect of Super Drags’ plot feels very much like a loving tribute to the kind of magical-girl and sentai/mecha hero team shows that have always had a broad appeal to younger audiences, but the show’s bawdy sense of adult humour makes it feel distinct—and has been the source of some controversy. Super Drags’ dialogue often reads like the transcript from a particularly boozy, catty episode of RuPaul’s Drag Race: Untucked!, which is to say that the jokes are equal parts clever and filthy and often veer into decidedly blue territory that might put some people off.

These aren’t the pleasant, sanitised drag queens newly-out baby gays introduce their parents to at their first pride parades. The Super Drags are the kinds of all-stars who’ll throw a drink in your face, embarrass you in front of the world for acting up at one of their shows, and silently judge you for having seen Venom before A Star Is Born.

The show’s fondness for dick jokes and graphic gags about gay sex were enough to gain it an early condemnation from Brazil’s Department of Pediatrics of Development and Behaviour before the series’ release. Back in June, the Department put out a statement calling for Netflix to pull its plans on Super Drags due to the concern that the show’s queer messages were inappropriate for children—especially since, given the show’s superhero subject matter, it’s the kind of program that might catch younger viewers’ eyes.

While the organisation insisted that it respected the voice of Super Drags’ team, the subtext of the call to Netflix smacked of the kind of homophobic ideas conservatives have been lobbing at queer people for ages—that the very existence of non-cis, straight people is somehow a potential threat to young people. Again, Super Drags is clearly labelled as not really being for kids, but of course, this is the internet (and Netflix, to boot) that we’re talking about, which means that short of parents setting restrictions on their accounts, it’s not as if a teen trying to watch the show isn’t going to be able to.

That being said, Super Drags dropped both in Brazil and the U.S. at a time when both countries are dealing with relatively recently-elected political leaders who regularly espouse homophobic propaganda from the highest seats of power. In the years leading up to his successful bid for Brazil’s presidency, President-elect Jair Bolsonaro has been notoriously open about his retrograde ideas regarding queer people—calling for violence against them and insisting that they are a social ill that must be dealt with. Though Bolsonaro has begun to reel in his homophobic rhetoric since winning the election for the sake of public appearances, his willingness to stoke fears about and animosity towards LGBTQ+ people has solidified his status as someone not working to protect queer rights in the country.

With that kind of socio-political backdrop to it, there’s a boldness to Super Drags’ willingness to be an unabashedly outspoken celebration of the glittery, campy aspects of queer culture that have become more popular with mainstream audiences. As hokey as a flying drag queen beating up a terrorist for trying to attack a busload of gays on their way to a concert sounds, it’s the kind of message that’s worth amplifying in times when bigotry against minorities like LGBTQ+ people is on the rise and making people question the safety in the world.

That’s also what makes the series’ overall lightheartedness such an effective counterbalance to its crassness. To be clear, Super Drags repeatedly has its head all the way in the gutter to the point of being a little cringe-worthy, but it never makes the mistake of taking potshots at the people who need the most protection. It’s a show that wants you to understand the beauty of accepting people for who they are and respecting their identities—a message way more shows could stand to champion more often.