Inside the Fight to Legalise Psilocybin Therapy in Oregon

Aliens From These Worlds Could Be Watching Us Right Now

The Witches Remake Is a Silly Comedy for Kids Who Aren’t...

No, Brian Kemp Did Not Just Doxx Georgia Voters, But The Reality Is Somehow Worse

The contentious and still outlets discovered that, under Kemp’s watch, the names and addresses of thousands of Georgia voters had been uploaded to a massive excel sheet on the Secretary of State website—concluding that the divisive candidate had “doxxed” voters.

Brian Kemp is indeed horrible, so it gives us no pleasure to report that this seemingly damning disclosure has nothing to do with him whatsoever.

“State law requires all of the information contained in the absentee voter file to be publicly accessible. If we did not provide this information to members of the public, we would be breaking the law,” Candice Broce, a spokesperson for Kemp’s current office, told Gizmodo. The law that necessitates this disclosure, for whatever reason, includes not only those who requested absentee ballots but also in-person early votes. It’s been on the books since 1994—approximately seven years before loathsome dickhead Brian Kemp ever held an elected office.

Elsewhere on the Georgia SoS site, similar spreadsheets of voter information are available going back to 2013. Still, Broce claimed she’d been “slammed with calls about” release of this information.

Under Georgia law, all data collected on voters must be made “available for public inspection,” with the exception of a few items: Social Security numbers, dates of birth, driver’s licence numbers, and “the locations at which the electors applied to register to vote.” The Georgia Secretary of State’s office even runs an online store where this information can be purchased on the cheap. A single county’s voter list can be bought for $US50 ($69) while a statewide voter list cost $US250 ($345). It’s not immediately clear why absentee and early voter lists are made public for free. 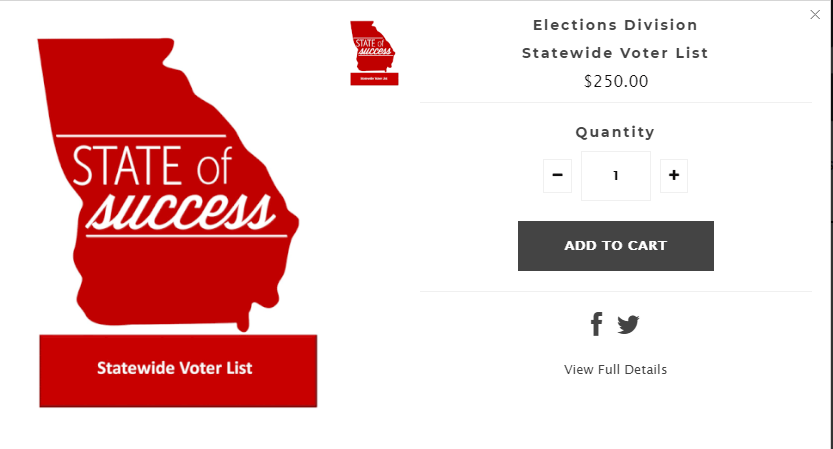 The availability of voter information varies from state to state—and so does the price. After the president’s now-defunct voter fraud commission, led by defeated Kansas gubernatorial candidate Kris Kobach, requested access to voter rolls nationwide, Alabama Secretary of State John Merrill offered to sell the data to the White House for $US32,000 ($44,116) (whereas Kemp cited the $US250 ($345) fee in his state). Some states have stricter rules around the release of voter data; California, for instance, will only provide it to journalists, political campaigns, and academic researchers. California law includes criminal penalties for the “misuse or improper acquisition of voter registration,” a spokesperson for the California Secretary of State’s office told Gizmodo.

There are, however, some restrictions in Georgia regarding the release of voter rolls. For instance: voters can request that their address remain confidential, provided they’ve obtained a restraining order, or are a resident of a family violence shelter. Those requests (if they’re approved) remain in effect for four years.

Regardless of state law, voter rolls are frequently made public due to human error. Last year, for example, Gizmodo reported on a security breach at a GOP data firm that exposed nearly 200 million U.S. voters. Earlier this year, a California newspaper mistakenly leaked data on 19.5 million state residents. A different version of the same California voter roll was held for bitcoin ransom two months earlier.

So yes, this situation is intrinsically horrifying. There don’t seem to be compelling reasons why the names, addresses, or disability statuses of voters should be this easily obtained—paid or free—and Georgians have a right to be angry. It just happens to be one of the few terrible things that isn’t Brian Kemp’s fault.