We Now Have The Technology To Build A Star Trek Shuttle

Planes that fly with no moving parts are now a reality. You might have seen them on Star Trek, gliding through space silently on ionic winds. MIT associate professor of aeronautics and astronautics Steven Barrett saw them when he was a kid. And now he’s developed the ionic wind-powered plane of his childhood dreams.

Here it is in action:

It’s the first time a plane has flown without any moving parts.

“In the long-term future, planes shouldn’t have propellers and turbines,” Barrett says. “They should be more like the shuttles in ‘Star Trek,’ that have just a blue glow and silently glide.”

What’s powering it are these lines of wires strung across the front of the model: 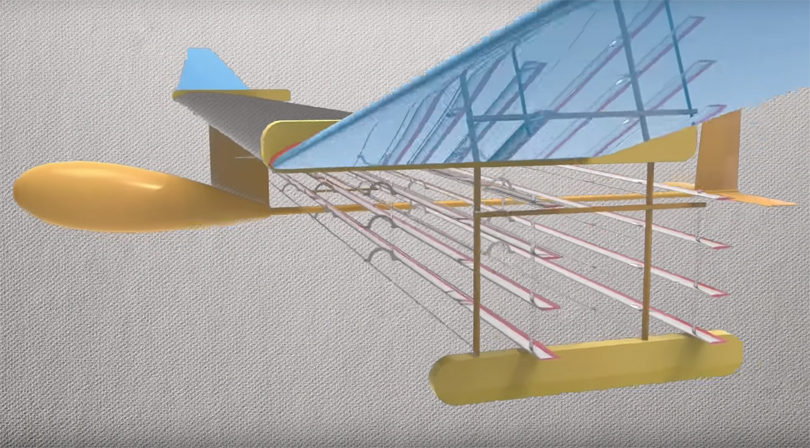 “Ionic wind” is more generally known as “electroaerodynamic thrust” and it’s actually based on a principle that was first identified in the 1920s.

It describes the wind, or thrust, that’s produced when a current is passed between a thin and a thick electrode. If enough voltage is applied, the air in between the electrodes can produce enough thrust to propel a small aircraft.

But in practice, the reality of it has never progressed beyond hobbyists lifting small models, tethered to large voltage supplies, off their workbench.

Nine years ago on a sleepless night in a hotel, a jetlagged Barrett went to work on the back of an envelope to find a way to turn the theory into a viable propulsion system.

And just recently, in the gymnasium in MIT’s duPont Athletic Center, they made a plane with a 5-metre wingspan fly 60 metres without the aid of any moving parts.

They repeated the flight 10 times, with the plane repeatedly producing enough thrust to sustain it over similar distances each time.

“This was the simplest possible plane we could design that could prove the concept that an ion plane could fly,” Barrett says.

“It’s still some way away from an aircraft that could perform a useful mission. It needs to be more efficient, fly for longer, and fly outside.”

Ions, how do they work?

The power comes from a stack of lithium-polymer batteries in the fuselage.

They designed a power supply that converted the batteries’ output so they could supply electricity at 40,000 volts – enough to positively charge the wires via a lightweight power converter.

Here the technical explanation of what happens next, via MIT News:

As the newly formed cloud of ions flows toward the negatively charged wires, each ion collides millions of times with other air molecules, creating a thrust that propels the aircraft forward.

We’ve seen ion drives before. NASA has a system called HiPEP, and University of Sydney student Patrick “Paddy” Neumann has a system he wants to use to enable long voyages through space.

But neither of those have to fight gravity.

Barrett’s team can now move on to trying to improve the efficiency of their design, to produce more ionic wind with less voltage.

“It took a long time to get here,” Barrett says. “Going from the basic principle to something that actually flies was a long journey of characterising the physics, then coming up with the design and making it work.

“Now the possibilities for this kind of propulsion system are viable.”

Here’s more video of the test:

You read more about the results of the test in the journal Nature.

This article was originally published on Business Insider Australia. Read the original here.