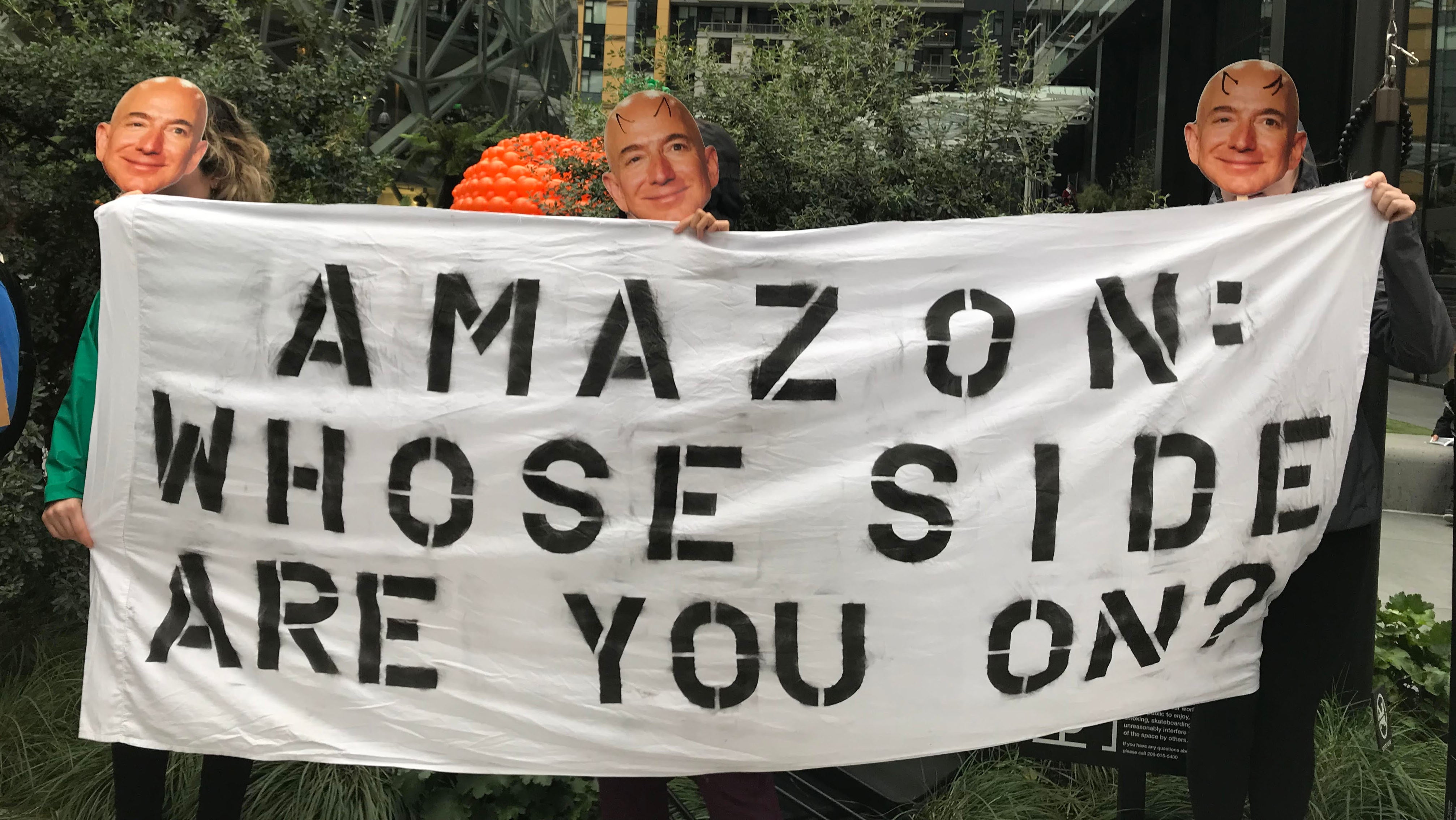 The protesters are primarily affiliated with Latinx rights groups Mijente and NWDC Resistance—and the masks, while appropriate for the festivities, are meant as a direct “fuck you” to Amazon’s ongoing (and often successful) attempts to sell its questionably effective facial recognition software to local law enforcement agencies and Immigration and Customs Enforcement (ICE). The protesters are also calling out the company’s many cloud computing contracts with ICE’s parent agency, the Department of Homeland Security.

“We’re trying to highlight the way that Jeff Bezos is literally making billions of dollars off Trump’s agenda,” Jacinta Gonzalez, a senior campaign organiser with Mijente told Gizmodo. “This [ICE] is an agency that across the country people know as a rogue agency, that has no consideration for people’s human rights—doesn’t even have consideration for people’s Constitutional rights—and has continued to be much more aggressive in their agenda of separating families at the border, but also starting to go after people who have been in this country for a very long time.”

“What these tech companies such as Amazon are doing is just facilitating, not hundreds but thousands of numbers to be added to daily detention.”

Among those long-term residents of the country being targeted is NWDC Resistance activist Maru Mora-Villalpando, who went public with her undocumented status in 2014. She believes the agency’s deportation proceedings against her, which began last December, are intended as an intimidation tactic, but she continues to vocally oppose the expansion of ICE and the tech companies that provide infrastructure to it.

“We’ve seen throughout the years they have been expanding their reach to hunt down my communities and other communities,” Mora-Villalpando told Gizmodo. “What these tech companies such as Amazon are doing is just facilitating, not hundreds but thousands of numbers to be added to daily detention.”

An ICE spokesperson told Gizmodo that Mora-Villalpando “is in removal proceedings because she has violated the country’s immigration laws.” The spokesperson claimed the agency “does not retaliate in any way and respects the rights of all people to voice their opinion without interference,” and that any allegation to the contrary would be “irresponsible, speculative and inaccurate.”

Earlier this year, a so-called “techlash” spread through major firms like Microsoft, Salesforce, Google, and Amazon, when rank-and-file employees discovered their companies were involved in government projects they deemed objectionable. Unlike other tech firms providing assistance to ICE, which were quick to claim their specific involvement was not related to family separations at the border, Amazon has largely remained silent on its complicity and the rancor of its workers. 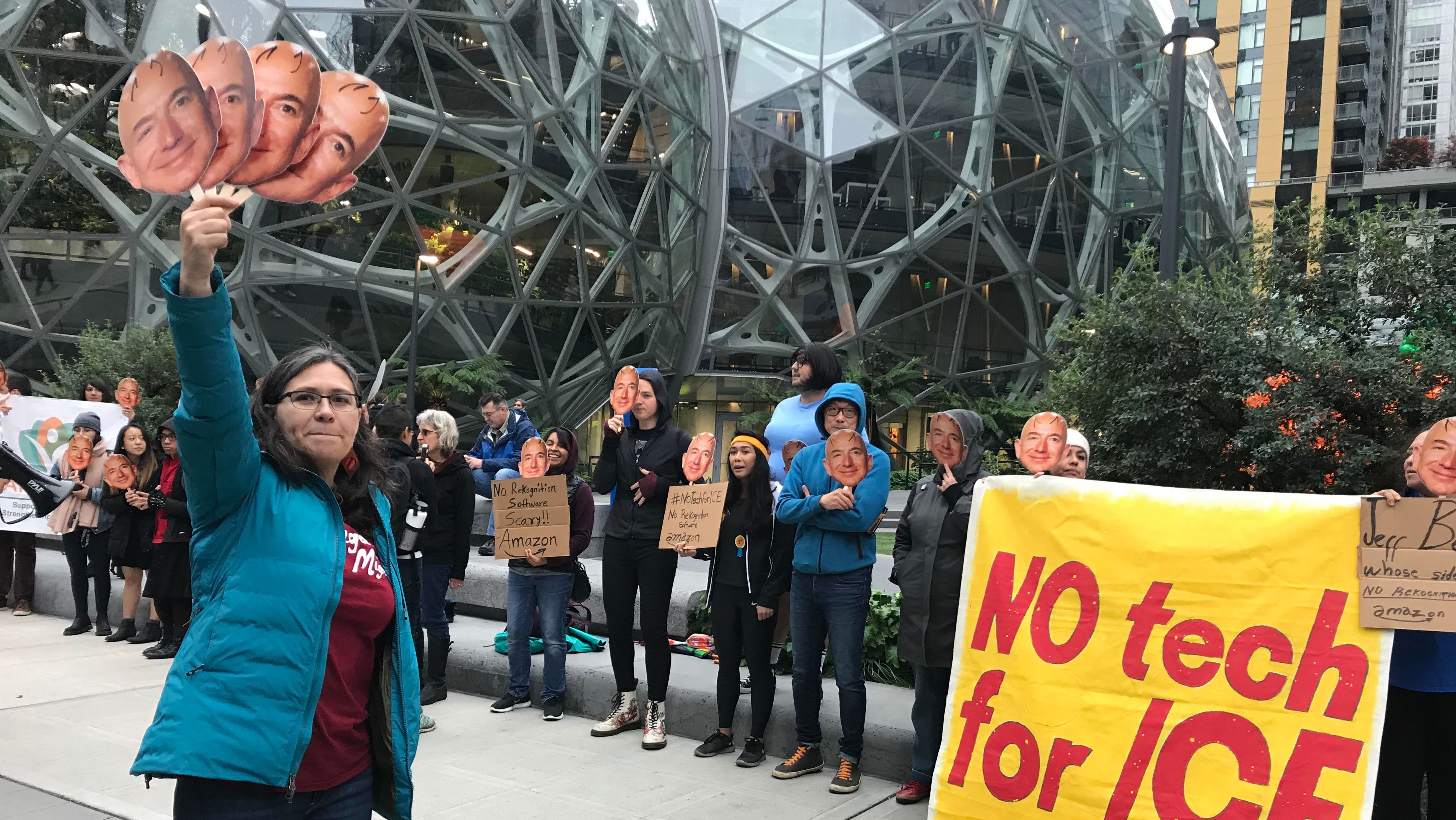 Bezos—whose stepfather, Miguel, is a Cuban immigrant and the beneficiary of a U.S. visa that he said, was “given almost freely”—has personally been bullish on tech companies cozying up to the Pentagon, though the closest he’s come to commenting specifically on his company’s relationship to DHS or ICE was this Zuckerbergian non-opinion given to Wired:

“There aren’t other countries where everybody is trying to get in,” he said. “I’d let them in if it were me. I like ‘em, I want all of them in. But this is a great country and it does need to be defended.”

A current Amazon employee, who was among the signatories of the June letter and asked to remain anonymous to speak freely on the controversy, expressed frustration at Amazon’s inaction and praised the protest for amplifying discontent over the company’s ongoing involvement with DHS and ICE.

“I’m glad the public pressure around this is continuing, and I’m especially happy to have people who have long been on the front-lines of the immigrant rights movement speaking up with us,” the employee told Gizmodo. “It’s unacceptable that after so much employee pushback and external pressure we still actively marketed such a dangerous technology to ICE—I think it really shows that no matter how much Jeff says he cares about immigrants or opposes Trump, when any money is on the line, he’s ready to compromise all that. It’s up to all of us to force him to do the right thing here.”

While it’s nice to have allies on the inside, many of Amazon’s workers still remain silent on the issue, perhaps for fear of retaliation. Today’s protesters claim there’s no ill-will, whatever their opinions. “We’re not against the workers at all,” Mora-Villalpando said. “We know that people are trying to earn a living, and so we’re really happy that as this campaign is starting to move, we will continue following the leadership of the workers themselves. I think they can tell us which way they want to go—and I think they believe at the end of the day their employers will listen to them.”

Amazon did not respond to a request for comment by publication time.