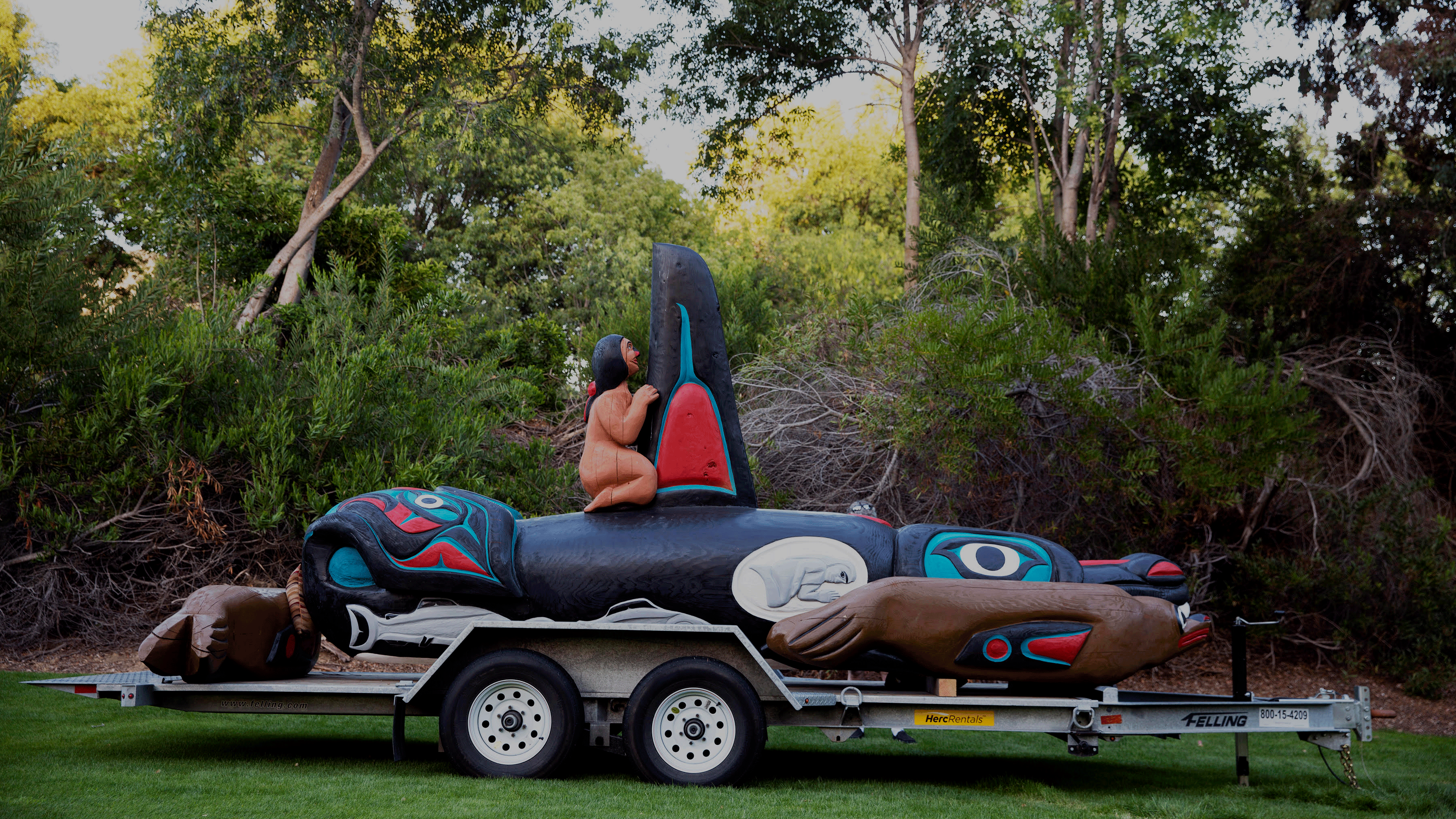 Two brothers, Jewell and Doug James, first started carving totem poles back in 2001 after 9/11. The brothers, both members of the Lummi Nation in Washington, created these poles as gifts meant to heal. They toured them around the US and invited people to put their hands on them because people are what make the poles sacred, Doug told Gizmodo.

Now, the brothers are using their carving skills to take up a different cause: threatened whales. Specifically, the 75 critically endangered orcas that call the Salish Sea along the Pacific Northwest coast home.

A 1360kg totem pole they helped carve will sit in the Florida Museum of Natural History starting December 8 as part of the “Whale People: Protectors of the Sea” exhibit to help raise awareness of the struggle these animals face due to climate change, starvation, and the fossil fuel industry.

For the Lummi, this fight is personal; they see the orcas as their relatives.

“They are as human as we are, and [the Lummi] approach it that way,” said Kurt Russo, a senior strategist with the Lummi National Tribal Sovereignty and Treaty Protection Office, to Gizmodo.

Painted in black, white, reds, and blues, the pole depicts a killer whale — made in the image of Tokitae, an orca captured from the Southern Resident Killer Whale Population in 1970 that’s now at the Miami Seaquarium as Lolita — as well as sea lions and chinook salmon that orcas eat.

The brothers, who carve as part of the Lummi Nation’s House of Tears Carvers, didn’t just come up with the idea for this latest totem pole out of nowhere. A friend of Doug James’ brought him a message almost four years ago: Tokitae must be saved. She had had visions about the orca wanting to come home, he said.

“The whale was putting out a message saying, ‘Is there anyone out there who can hear me? I want to go home,'” Doug James told Gizmodo.

This friend’s vision helped spur this whole project. In May, the totem pole travelled across the US, visiting cities like Seattle and Houston, inviting people to touch it, before finally arriving in Florida. Efforts to free Tokitae have been ongoing since the ’90s. This is just the latest, but scientists aren’t sure she’d adjust well to the wild after being captive so long.

At the museum, the totem pole in her honour will sit in the middle of an octagon-shaped room whose walls will be covered in floor-to-ceiling projections of a multi-channel film that tells visitors the story of the Salish Sea — and the marine mammals that dwell in its waters.

The Natural History Museum was created in 2014 as a pop-up travelling show that’s finally squeezed its way into more traditional museum spaces. The museum aims to highlight the “sociopolitical forces that shape nature” that we don’t usually find in museums, said Executive Director Beka Economopoulos to Gizmodo. It began in response to fossil fuel billionaire David Koch remaining on the board of the American Museum of Natural History in a time where climate denial has become so dangerous.

In fact, this new museum sent the Museum of Natural History a letter signed by nearly 150 scientists urging it to end ties to this Koch brother — and not long after, he stepped down.

However, shaking a fist from outside the institution didn’t feel like the most effective strategy, Economopoulos told Gizmodo. So she decided they had to change the way museums operate from within. After all, museums are a $US50 ($69) billion industry, according to the American Alliance of Museums.

The Natural History Museum has collaborated with the Lummi Nation and House of Tears Carvers in the past. An earlier exhibit which also featured a totem pole was more general, shedding light on the ways fossil fuels are harming the environment. This new exhibit’s specific focus on whales, however, is bound to be incredible.

If you care about the killer whales, Toketai, or the Salish Sea, make your way out to the exhibit opening in Gainesville, Florida, next month. It’ll be open until May 5, 2019. You’ve got plenty of time.