Be Warned: Customer Service Agents Can See What You’re Typing In Real Time

Next time you’re chatting with a customer service agent online, be warned that the person on the other side of your conversation might see what you’re typing in real time. A reader sent us the following transcript from a conversation he had with a mattress company after the agent responded to a message he hadn’t sent yet. 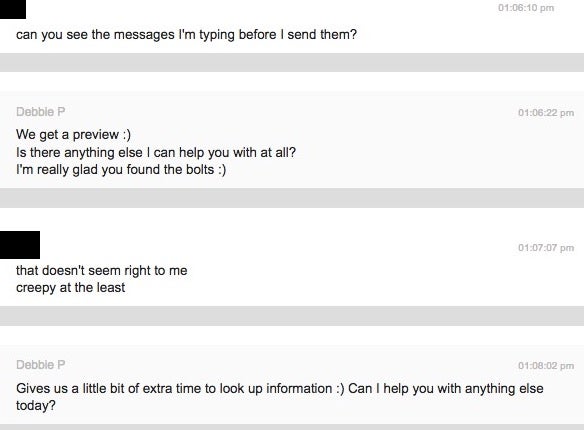 Something similar recently happened to HmmDaily’s Tom Scocca. He got a detailed answer from an agent one second after he hit send.

Googling led Scocca to a live chat service that offers a feature it calls “real-time typing view” to allow agents to have their “answers prepared before the customer submits his questions.” Another live chat service, which lists McDonalds, IKEA, and Paypal as its customers, calls the same feature “message sneak peek,” saying it will allow you to “see what the visitor is typing in before they send it over.” Salesforce Live Agent also offers “sneak peak.”

On the upside, you get fast answers. On the downside, your thought process is being unknowingly observed. For the creators, this is technological magic, a deception that will result, they hope, in amazement and satisfaction. But once revealed by an agent who responds too quickly or one who responds before the question is asked, the trick falls apart, and what is left behind feels distinctly creepy, like a rabbit pulled from a hat with a broken neck. “Why give [customers] a fake ‘Send message’ button while secretly transmitting their messages all along?” asks Scocca.

This particular magic trick happens thanks to the useless buttons in elevators to “close door” or the placebos to push at crosswalks disappeared overnight.).

Lest you think unexpected monitoring is limited to your digital interactions, know that you should be paranoid during telephone chats too. As the New York Times reported over a decade ago, during those calls where you are reassured of “being recorded for quality assurance purposes,” your conversation while on hold is recorded.

So if you don’t want to be monitored or send secret messages to agents, put your phone on mute while on hold and copy/paste messages from another document to your customer service chatbox. And in general, be nice to customer service agents. It’s not their fault.