The Scorpion-3 Is A Working Hoverbike You Can Preorder For $14,000

According to HOVERSURF’s purchase page, the S3 2019 is a limited edition, though it fails to mention just how limited the run will be. What it does say is that delivery will be in two-six months, though if you’re not in the US, it’ll probably take longer.

If you’d like to see it in action, check out the video below.

Thanks to its 12.3kWh, lithium-manganese-nickel battery, the S3 can reach 5m (adjustable by the pilot), with 40 minutes of flight time in “drone” mode, or 10-25 minutes if someone’s riding, and recharges in a speedy two-and-a-half hours. Total thrust is around 364kg. 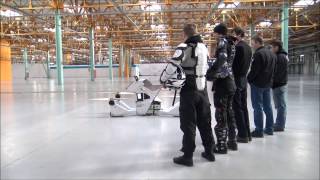 Forget Hoverboards, Check Out This Hoverbike

It's called the Scorpion-3, and the creators, Hoversurf, claim it is as simple to operate as riding a bike. We're talking a single-seat aircraft based on a quadcopter. It's electric powered, and was apparently designed for 'extreme conditions'.