Comcast Prepares to Screw Over Millions With Data Caps in 2021

How Tesla Made The Model 3 So Safe

Tesla made waves earlier this week by announcing that the Model 3 scoring five stars in all of the National Highway Traffic Safety Administration’s crash test categories, leading to the claim that it has “the lowest probability of injury of all cars the safety agency has ever tested.” The Tesla cars have long had a strong record for safety, but this would take it to a new level. Here’s some of the engineering behind what makes the Tesla Model 3 so safe.

Before we get into how Tesla says it achieved this, I wanted to learn more about what this claim meant. So I reached out to NHTSA, the vehicle safety arm of the U.S. Department of Transportation, who told me that five stars is the best rating they give and that they don’t have any sort of sub-rating system for vehicles that have scored this highest mark. (Other cars like the Volvo S60, for example, have also scored five stars in all categories, and are thus equal to the Tesla Model 3 as far as NHTSA’s ratings are concerned.)

Tesla told me that it dug into NHTSA’s data, and looked at overall probability of injury figures. The company sent me a link to some of NHTSA’s data; here’s a look at the injury probabilities to various parts of the body during a frontal crash test:

And here are the star ratings for the frontal crash test:

I’m admittedly no expert on interpreting this data, but a cursory look at how the 2011 and newer NHTSA crash ratings work shows that the “p(AIS3+)” figures above represents the probability of sustaining an injury. It rates a score of three or above on the Abbreviated Injury Scale, with three being “serious.” These probability figures are obtained using established risk curves relating data measured in crash tests to probability of injury.

NHTSA takes test readings from various body parts shown in the first table (head, chest, neck, femur), comes up with a combined AIS 3+ injury probability figure for both driver and passenger (shown in the second table), and divides those by a 15 per cent “baseline” injury risk, which is meant to be “an approximation of the fleet average injury risk for [the] test condition.” 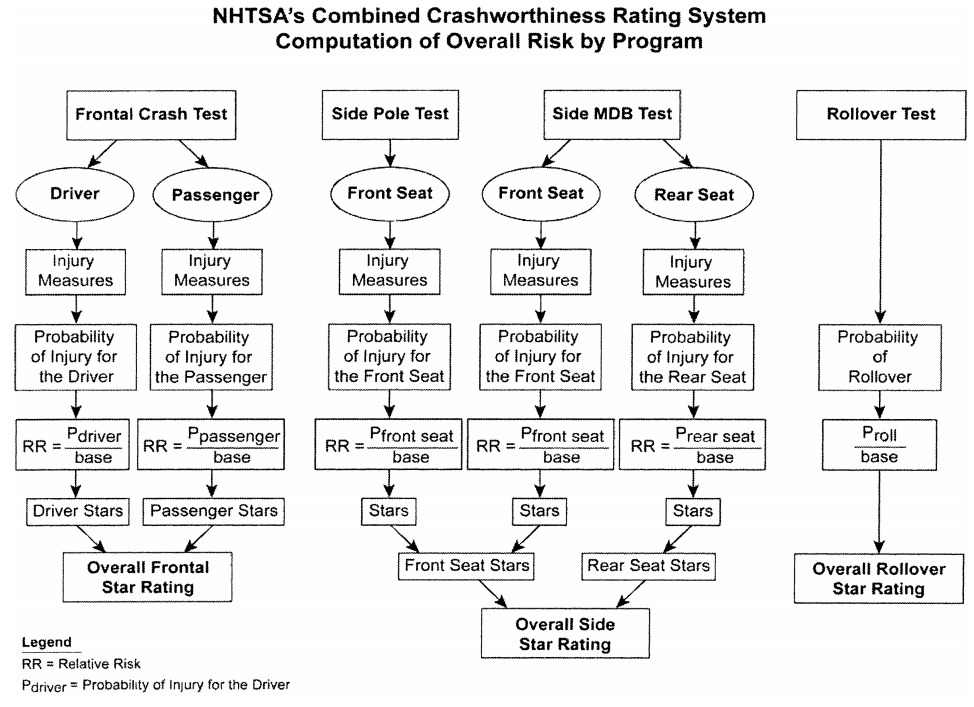 With the probability of an AIS injury above three divided by the baseline, NHTSA gets relative risk scores (RRS in the second table or RR in the diagram above) for the driver and passenger, which it averages to come up with an overall front crash star rating, per the following relationship between RRS and star ratings:

The rating methodology works similarly in the rollover and side tests (though the rollover has a different RRS vs star scale, and the side test weighs the pole and side impact injury probabilities differently).

So to get an overall vehicle star rating like the Model 3’s shown below, NHTSA just takes the RRS scores—which, again, just describe the probability of a “serious” or worse injury compared to a baseline—from each of the tests, and comes up with weighted average based on each crash mode’s “contribution to the total injuries occurring in the real-world.”

That weighted average is called the Vehicle Safety Score, and its related to the overall star rating (five stars in the Tesla Model 3’s case, as shown above) per the table below:

So basically, when Tesla says its Model 3 has the “lowest probability of injury” ever tested by NHTSA, it means that the overall VSS score (which represents the “relative risk of injury with respect to a baseline of 15 per cent”) of 0.38 is lower than that of any car ever tested.

That’s impressive, any way you slice it.

Since each RRS was calculated using a 15 per cent baseline, Tesla simply backed out the overall probability of injury by multiplying that 0.38 Vehicle Safety Score by 0.15, yielding the number you see below: roughly 5.7 per cent. 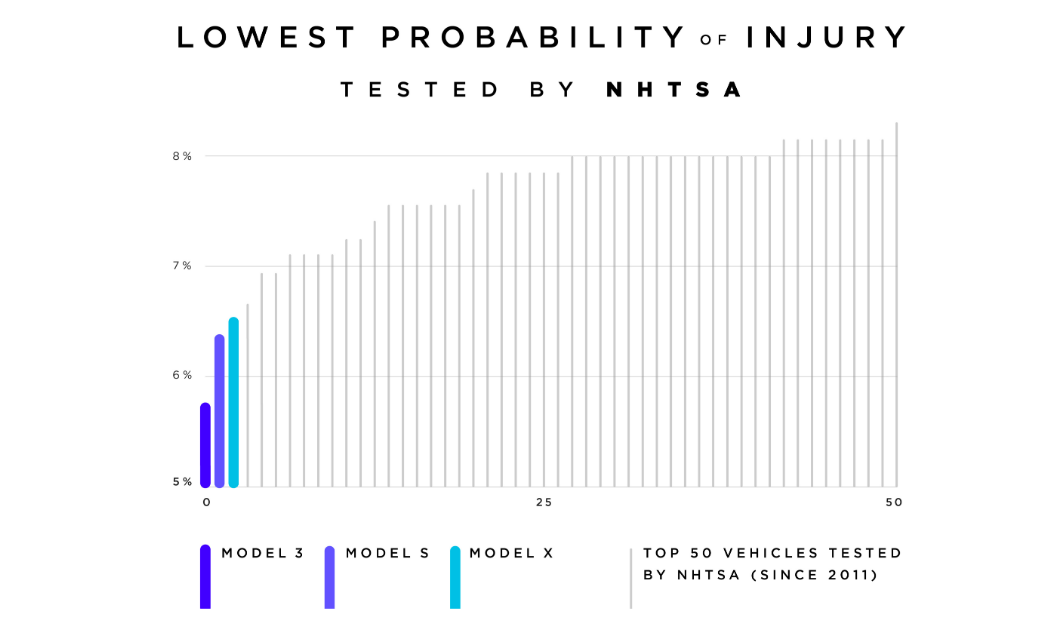 Anyway, now on to how Tesla says it managed to protect the car’s occupants.

The strategic placement of mass, the company says, was important. It’s not just about the low center of gravity to improve rollover protection (or the strong roof to protect the car if it does roll over) or the 50-50 weight distribution to help with handling, it’s also about minimising moment of inertia.

By keeping parts like the battery and the motors close to the car’s center of gravity, Tesla says the car not only handles better, but also offers improved “capability of stability control” thanks to “[minimized] rotational kinetic energy.”

Tesla also goes on to discuss how the car’s electric vehicle architecture—consisting of a “rigid” passenger compartment and a “fortified” battery pack—helps distribute crash forces away from the cabin, and optimises the car’s crumple zone, with the company pointing out in a video how the Audi A4’s motor gets shoved toward the passenger compartment.

Here’s a snapshot of that clip. The point, here, is that the Tesla’s safety is unencumbered by a big metal engine between the wall and the cabin (and even the dual-motor model has its motor aft of the front axle):

The California EV company also points out that its Model 3 has the least intrusion from a side pole impact of any automobile that NHTSA has ever tested. The company describes how its engineers managed this:

[We] patented our own pillar structures and side sills to absorb as much energy as possible in a very short distance. These structures work alongside the vehicle’s rigid body and fortified battery architecture to further reduce and prevent compartment intrusion. With less intrusion into the cabin, our side airbags have more space to inflate and cushion the occupants inside.﻿﻿

Tesla also talks about how the front of the car was also designed to handle the pole tests, which impart a narrow, focused load onto the vehicle between the main crash rails:

…energy-absorbing lateral and diagonal beam structures work to mitigate the impact. This includes a high-strength aluminium bumper beam, a sway bar placed low and forward in the front of the car, cross-members at the front of the steel subframe that are connected to the main crash rails, and additional diagonal beams in the subframe that distribute energy back to the crash rails when they aren’t directly impacted.

An ultra-high strength martensitic steel beam is also attached to the top of the front suspension to further absorb crash energy from severe impacts, and the rear part of the subframe is shaped like a “U” and buckles down when impacted. These structures continue to be effective even when a front motor is added for Model 3 Dual-Motor All-Wheel Drive, due to the fact that the subframe is designed to pull the nose of the motor down and out of the way.﻿﻿

After the S, the X, and now the 3, it’s clear that Tesla has this whole crash safety thing down pretty well.