Amazon announced yesterday that the company will raise its minimum wage to $US15 ($21) for all American workers, including seasonal employees and those employed by temp agencies. The move is a direct result of public pressure from people who have criticised Amazon for low wages, gruelling conditions, and the fact that many Amazon employees rely on food stamps.

One in three Amazon warehouse employees in Arizona, for example, are on food stamps.

“We listened to our critics, thought hard about what we wanted to do, and decided we want to lead,” Amazon founder and billionaire Jeff Bezos said in a statement. “We’re excited about this change and encourage our competitors and other large employers to join us.”

The new $US15 ($21) minimum goes into effect on November 1 and will impact 250,000 American Amazon employees, as well as more than 100,000 seasonal holiday employees that are being staffed up for the coming busy season.

The current US federal minimum wage is $US7.25 ($10) per hour, which hasn’t been changed since the winter of 2009. Some major cities have taken it upon themselves to raise their minimum wage, including Seattle which went to $US15 ($21) earlier this year.

Amazon also says that the company plans to lobby the US government for a change to the minimum wage. Unions and workers rights activists have been calling for a $US15 ($21) minimum wage for years.

“We will be working to gain Congressional support for an increase in the federal minimum wage. The current rate of $7.25 was set nearly a decade ago,” Jay Carney, senior vice president of Amazon Global Corporate Affairs, said in a statement. “We intend to advocate for a minimum wage increase that will have a profound impact on the lives of tens of millions of people and families across this country.”

Amazon would not comment to Gizmodo on the record about how it plans to lobby Congress and just how many lobbyists it has in the Washington, DC area.

Workers at Whole Foods, which was bought by Amazon in 2017 and has recently seen workers try to unionise, are also getting a raise. Amazon has been aggressively anti-union in leaked video obtained by Gizmodo.

Jeff Bezos, the richest man in the world with over $US164 billion ($228 billion), has come under harsh criticism for employing a low paid workforce, many of whom rely on food stamps to survive.

Amazon has also been criticised globally for not paying its fair share of taxes. The global tech giant is also being investigated by the European Union over how it handles consumer data.

US Senator Bernie Sanders of Vermont held a very short press conference giving Jeff Bezos “credit where credit is due.”

“Let me take this opportunity to thank the many hundreds of Amazon workers who contacted our office talking about the wages and working conditions that they were employed under,” Sanders said.

“We also want to take this opportunity to thank the heroes and heroines at the Fight For Fifteen movement, a movement that started off in the fast food industry many years ago and is sweeping the country,” he continued.

“What Mr Bezos today has done is not only enormously important for Amazon’s hundreds of thousands of employees, it could well be, and I think it will be, a shot heard around the world,” Senator Sanders said, explaining that there’s “no reason” why other employers in the US shouldn’t be paying at least $US15 ($21) per hour as well.

“In this country, if you’re working 40 hours a week, you should not be living in poverty.”

Whatever its motives, it’s a good thing that Amazon is starting to pay workers more. And as you can see from the statement by Bezos, this was a direct response to criticism. Public shaming works. And unions are even better. 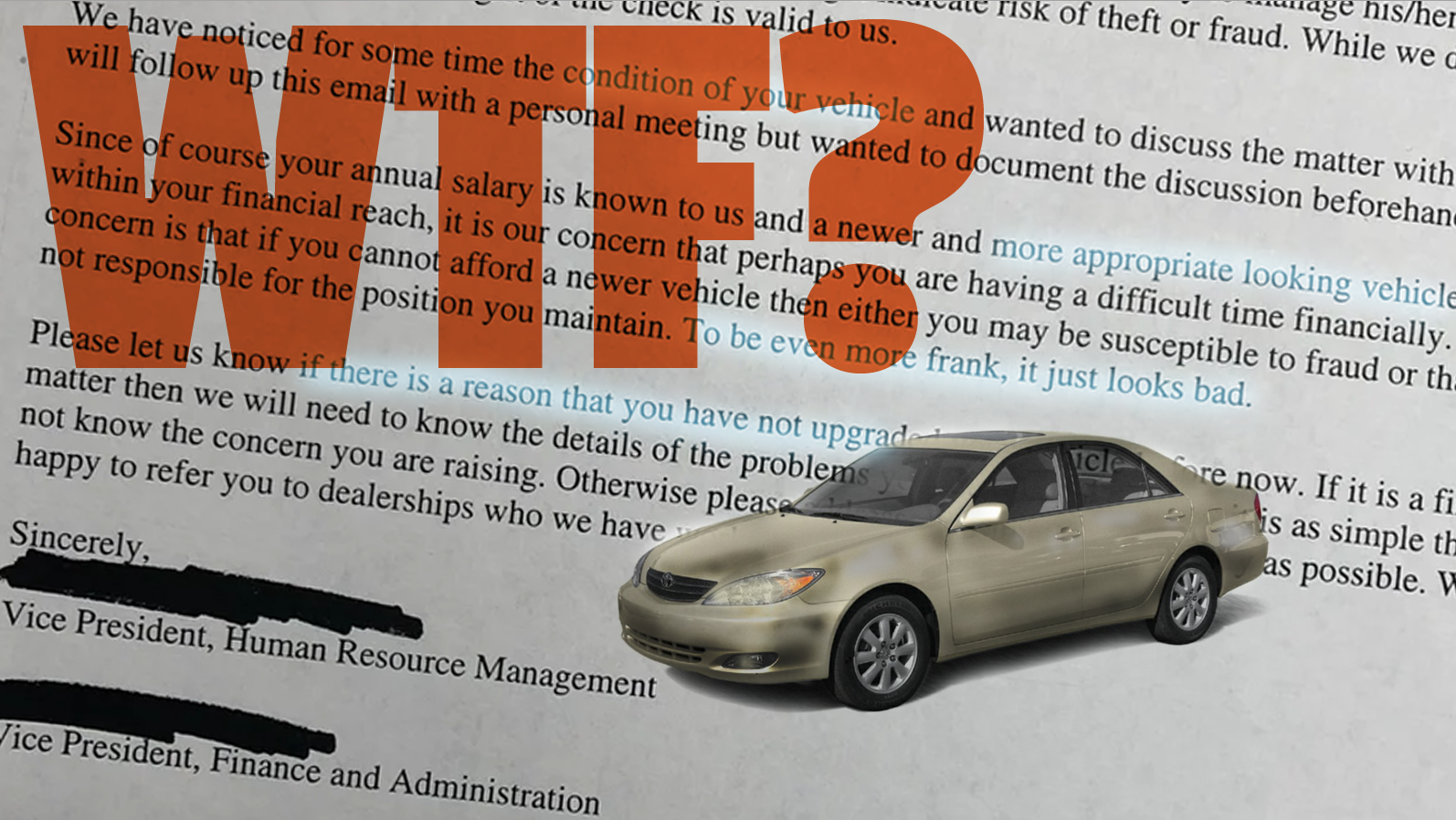 Jason Torchinsky 24 Jan 2020 5:00 PM
I should preface this all by saying that I’ve yet to be able to absolutely confirm that this absurd email is real, though the original poster insists that it is. Fundamentally, it’s just a boring email from an HR department to an employee, but the content of the email is deeply insulting, reflecting the worst aspects of modern life, socioeconomic realities, culture, and perhaps even capitalism itself. And, of course, like all things that really matter, it’s about a car.