A Look At The Philosophy Of Cowboy Bebop

cowboy bebopvideoxpost
To sign up for our daily newsletter covering the latest news, features and reviews, head HERE. For a running feed of all our stories, follow us on Twitter HERE. Or you can bookmark the Gizmodo Australia homepage to visit whenever you need a news fix.

Video: One of the greatest anime ever made, Cowboy Bebop provides a stylish blend of sci-fi with a surprising range of low-end tech: Two-way radios, crappy diners, and people stuck in typically human scenarios. But it’s not the sci-fi setting or sci-fi elements that makes Cowboy Bebop.

YouTubers Wisecrack have put together a quick breakdown of the philosophies that underpin the series. One of Bebop‘s largest influences is the Western genres, and in particular how Western films incorporate suicide and death.

That romantic obsession with a pledge and cause is a huge part of Spike’s backstory. But as the video below explores, the attitudes and philosophies from great Westerns also filters through to the remainder of the Bebop cast: Spike and Vicious’ duel in the finale, and Spike’s relationship with himself after leaving the Syndicate. But there’s also a healthy dose of noir borne out with Faye, through the self-discovery of her past and her role as a femme fatale.

With Bebop getting a live-action remake in the near future, it’s a good time to rewatch Bebop. And if you want to dive a little more into the series, Heather took a look at one of the best elements of the sci-fi anime: How often it allowed its heroes fail. 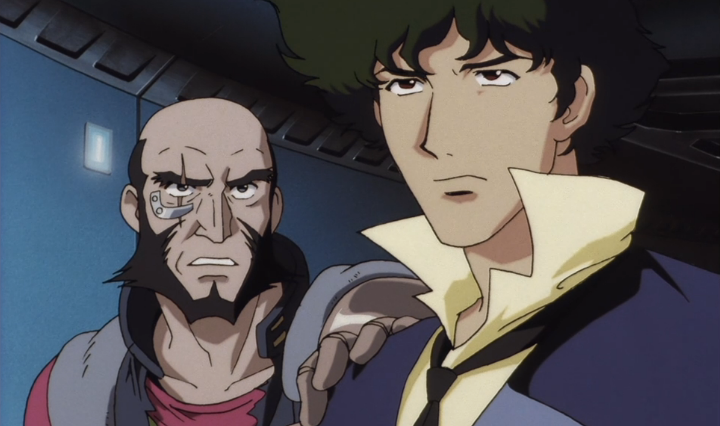 1998’s classic anime Cowboy Bebop is well known for its fusion of jazz confidence and Eastern melodrama. While it’s easy to remember the characters’ stylistic flair, what really allowed the series to endure was how often it showed its core cast to making mistakes and failing spectacularly.