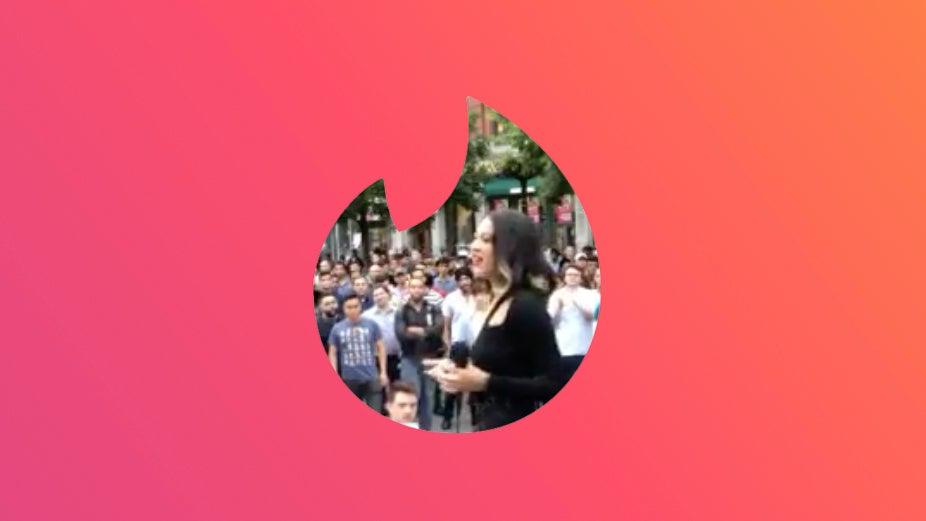 A woman identified as Natasha Aponte used Tinder to invite several dozen guys on a simultaneous date in New York City on the weekend, leaving her targets bewildered by the stunt. The date turned out to be an event that the host described as “Live Tinder,” a real-life game show of sorts that resembled a cross between The Bachelorette and Catfish. In the end, it’s hard to pick a winner here, but it’s looking good for Natasha.

Several attendees have spoken up about what happened on Sunday night, and their stories sound quite similar. One of them described his experience matching with someone named Natasha on Tinder several weeks ago. She first proposed getting a drink, but then said she’d be working on “a big presentation” for work and would get back in touch when she had time. Two weeks later, Natasha proposed that the man meet her in Union Square, where her friend was DJing “around 6” on Sunday. They could meet in public and then “head out” on the date. Seems like a relatively normal Tinder exchange.

It wasn’t. The Tinder user showed up to find “a stage and a DJ and about 100 ppl and cameras and shit.” Soon thereafter, Natasha showed up on stage and explained that she had invited all of the men on the same Tinder date. She appeared to be flanked by security guards and arrived with another woman dressed in a referee shirt. You can read the whole thread here:

I am about to tell you an epic tale about subterfuge, dating in the 21st century and the fall of human civilization. This actually happened to me and it could happen to you too. Get some popcorn. *Thread*

Other sources offer similar accounts. One man named Spencer told the Gothamist that he, too, had matched with Natasha on Tinder and that she had also invited him to the event. Spencer provided screenshots that show Natasha engaging in a very similar conversation as what the Twitter user described. And if you still doubt the story, the DJ of the event posted a video of what ensued after Natasha took the stage in front of her Tinder matches. Natasha shows up around the 38-minute mark.

“As you may or may not know, my name is Natasha, and I have a confession to make for everyone here,” said the woman, who identifies herself as an actress, model, and singer on Instagram. “Everyone here today was brought here to be on a date with me.”

The crowd boos at this point.

“The reason behind this is dating apps are very difficult,” Natasha added, “and I said, ‘OK how do I solve this problem? “Maybe I can bring everyone here in person and see how that goes and solve this once and for all.”

Natasha proceeded to inform the group of men that they can compete for a date with her, although the crowd has already thinned considerably by the time she got to the rules. One guy unsuccessfully attempted to start a “Bullshit!” chant. Natasha then started sending men away. Trump supporters were sent away. Men named “Jimmy” were sent away. Men who smoked or drank heavily were sent away. Men under 5’10” were sent away. By the time the physical challenges started, it looked like only about two dozen guys were left. The sprinting competition, which took place after the pushup contest, is particularly hard to watch.

It’s unclear what motivated Natasha to lead this very public display. Some might call the event an unkind public shaming of men who were simply looking for love. Members of the MGTOW (Men Going Their Own Way) community engaged in an angry thread on Reddit, while pointing to the event as proof that men should avoid serious relationships with women. The MGTOW members, who are often aligned with the alt-right and men’s rights movements, referred to Natasha’s efforts as “a publicity stunt” as well as “career suicide for a young starlet.” They also suggested that the attendees retaliated by harassing her on Instagram. Though it was apparently public in the past, Natasha Aponte’s Instagram is now private.

There’s reason to believe that this “Live Tinder” event amounted to more than one actress’s attempt at internet fame, though. There was clearly a lot of planning that went into bringing dozens of men to Union Square for a dating competition. Aside from the DJ, sound system, and security, there also appear to be devoted cameramen filming the whole thing as well as a cue card guy.

To me, the whole stunt really is just funny as hell. It’s even funnier if you imagine that Natasha acted alone, and that some lucky guy stuck through all the shenanigans to earn a date with the woman he’d hoped to meet. True, lots of guys showed up expecting to go out on a fun date and left having felt misled or duped. But let’s be honest. Women have to have to deal with this kind of bullshit—and much worse—on Tinder every single day.

Update 5:05pm – The New York City Parks Department confirmed in an email to Gizmodo that the permit holder for the event was “Rob Bliss Creative / Rob Bliss.” According to LinkedIn, Rob Bliss is the founder of the eponymous agency which “has led branded campaigns to over a quarter billion views across YouTube and Facebook without spending a cent on advertising.” The agency “brands create viral content that leads to entirely organic national campaigns.”

In other words, this whole thing is almost certainly a viral marketing stunt. For whom? The brand will surely show itself sooner or later.