This Smart Speaker Pays The Artists It Plays, And A Sydney Blockchain Startup Is Powering It

Anyone with a passing financial familiarity with both crowd-funded speakers and cryptocurrency might be excused for running a mile in the opposite direction.

Jump in and history says you’re about to either lose your money or be lumped with some hardware that will work temperamentally for three months until software support for it is withdrawn and its bankrupt creators learn the hard way that they didn’t really research the whole concept-to-customer chain thoroughly enough.

But equally, you’ve got to admire anyone who believes in their product enough to take that risk.

The team at Volareo are nothing if not realistic. Last week they launched their smart speaker on Indiegogo (the launch was originally slated for May) and are promising deliveries by January 2019 (originally late October 2018).

Nicely, they hit it in under two hours.

What Volareo, based in Rotterdam, does have going for it is it’s run by consumer electronics entrepreneur and former Startup of the Year Founder Nick Yap.

And it’s not promising the world; just a high quality, affordable smart speaker.

It does, however, promise the world’s musicians a chance at getting paid for being played.

Earlier this month Volareo announced a collaboration with Sydney blockchain startup Emanate, which is hosting a new ICO (MN8) designed to reward musicians and others in the music industry.

It’s one of the first ICOs to be launched on EOS and will allow music producers to secure their own work and produce it on the Emanate platform.

Everyone involved in producing the music is programmed into the smart contract, and the blockchain will ensure everyone gets paid. That process also applies when two or more artists collaborate on or share their work.

Volareo describes it as “more than just a streaming platform”.

“It is a self-governed and decentralised technology network for audio industries.”

Emanate’s founder Sean Gardner wants to educate audiences and artists alike about how they can practically benefit from blockchain technology.

“We take traditional blockchain smart contract, we configure it and we enable artists to work with each other from either side of the planet, free of trust, seamlessly and for the royalties from their music to flow back almost in real time as it’s consumed,” he says.

Here’s one way Volareo’s speaker and Emanate come together to pay artists for their work, in real-time:

That just sent a tip to the artist.

Cute, but if the novelty of using Volareo’s MagLove clips wears off, you can also send a micropayment by clapping your hands, or with a voice command.

The speaker also hosts native integration of other blockchain streaming services such as Musicoin, Choon and Soundeon. Buy a Volareo speaker and you’ll get 500 Musicoins ($US10) preloaded with which to tip.

Early Bird buyers on Indiegogo can pick one up for $US89.

TechCrunch recently highlighted new market research “bullishly predicting that voice shopping will grow to a whopping $40 billion-plus in 2022, up from $2 billion today across the US and the UK”.

That’s extraordinary growth over just three years, but Yap said with it set to be dominated by just a handful of companies (Amazon and Google, mainly), “the existence of an independent alternative has therefore become urgent”.

Volareo promises to do all the things popular home assistant speakers do when you interact with them – play, pause, draw a circle to control the volume, flick through tracks:

And perhaps more, like order roses for your mum, and pay with Ether. Here’s how it’s hoped to stack up against Amazon’s Echo: 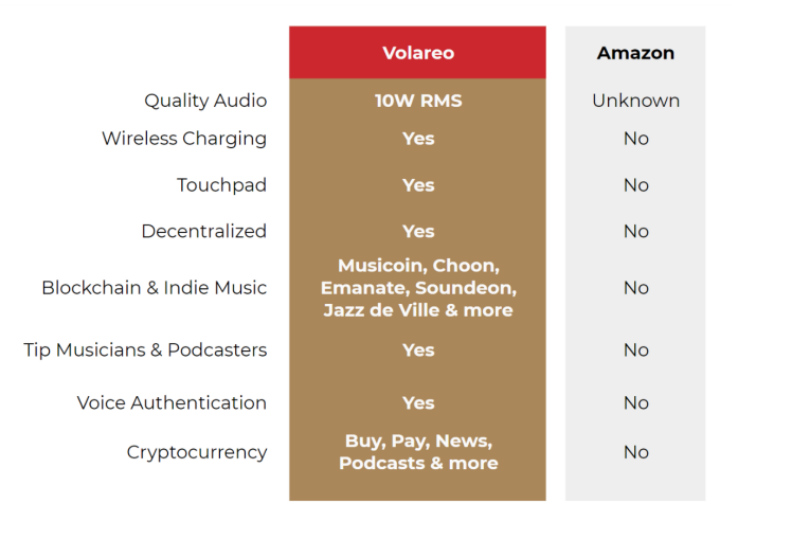 The Indiegogo funds top up $US350,000 it has already secured in private funding and will be used to “integrate the technology” it has developed into an actual speaker.

An ICO of its own will follow before the physical product is launched.

At launch, it will be able to receive voice commands in four languages, and the more funding it receives, the better Volareo will get via Over The Air (OTA) updates.

Here’s the first demo of Volareo’s various technologies, released just over a week ago:

And here’s the Indiegogo page.