2 years ago -
Filed to:alien vs predator 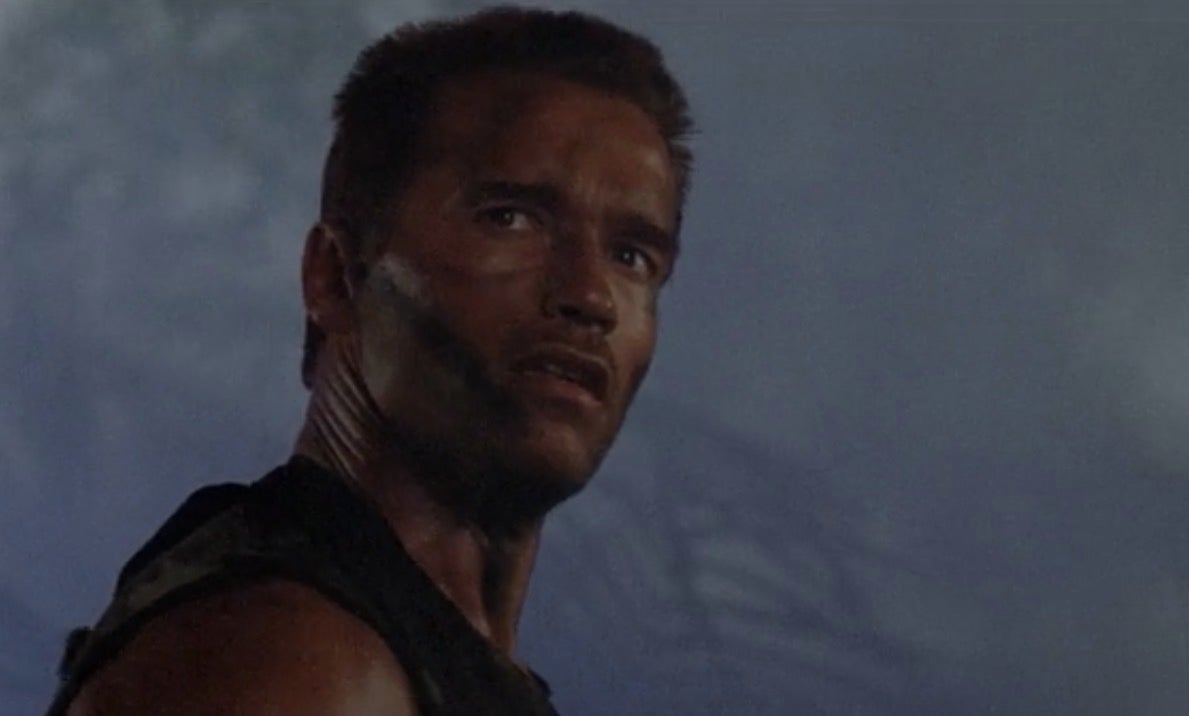 With Shane Black’s The Predator out September 13, now’s the perfect time to look back at all the gruesome, gory scenes that have helped the series straddle that knife edge between sci-fi and horror. (Maybe don’t eat while you reminisce.) Here are our deadly favourites from each Predator film.

Let’s get this crummy 2007 flick out of the way first. This weirdly generic, Colorado-set sequel to a spin-off is dark from start to finish in every sense of the word — but mostly, meaning it was filmed at night and/or underground and/or during a blackout, with a ton of rain and fire and smoke thrown in so you can’t ever see what’s really going on.

Though it does have one somewhat inspired scene where an Alien crashes a teenage swimming party (making short work of some one-dimensional jock bullies), the rest of the movie is surprisingly mean-spirited. Yes, it’s a horror movie, but it aims low and its most gruesome moments tend to feel like cheap shocks, especially the hospital scene in which heavily pregnant patients are made to incubate extraterrestrial spawn.

The whole movie leads up to a final clash between a lone Predator (who’s trying to tie up the loose ends from the previous AVP film) and the hybrid “Predalien” that’s been rampaging through the Rockies. It’s an evenly-matched battle, but it really doesn’t matter who wins, because the US government’s response to the situation is to nuke the whole damn town, including its otherworldly invaders.

It’s the best kill, mostly because right after it happens… the movie ends.

9. Lex and Scar fight the Alien Queen, Alien vs. Predator

A very strange pyramid has been discovered buried directly beneath a whaling station that was mysteriously abandoned in 1904. Hmm. Just as the humans are discovering what a bad idea it was to go poking around in an Alien lair, the Predators show up for their once-every-100-years hunting ritual, which requires human incubators to ensure a steady supply of Alien prey.

It’s a decent set-up — the isolated, frozen setting is as close to outer space on Earth as you could possibly get — that’s elevated by some clever touches (such as when the underground pyramid shifts its shape like a puzzle box), as well as a strong performance by Sanaa Lathan, whose character, Lex, is so badarse she earns the respect of the main Predator (known as “Scar”).

The first staging of the monster-on-monster tussle promised by the title is indeed a good one, and includes the sight of an Alien spraying a Predator with the corrosive neon blood that’s spewing from its injured tail. But the climactic fight, in which unlikely allies Lex and Scar defeat an entire pyramid full of Alien spawn before taking on the massive Alien Queen, is the most satisfying.

8. Stans is relieved of his spine, Predators

Producer Robert Rodriguez injects a pulpy energy into this 2010 reboot attempt, which turns the original film inside out by dropping a group of soldiers, gangsters and scumbags onto a jungle planet that the Predators have turned into a giant game preserve.

Everyone’s a stone-cold killer, but some are better-equipped for combat than others, both literally and mentally, including Adrien Brody’s well-armed, highly tactical mercenary. Others, such as Walt Goggins’ Stans — a Death Row inmate who fantasises about going on a coke-fuelled rape spree if he ever gets back to Earth — prove easier pickings. Sorta.

Surprisingly, the obnoxious Stans almost makes it to act three, but he’s finally snatched up by one of the hulking hunters, who proceeds to rip his spine right out of his flesh, a standard Predator move that’s given some extra flailing flair here.

Nobody onscreen, or in the audience for that matter, feels sorry for this character, who receives a death just as hideous as he deserves.

7. Beheading of the Berserker, Predators

Brody’s character, Royce, is set up from the beginning to be the warrior who’s most likely to make it to the finish line. So it’s no surprise he ends up battling the fiercest Predator (there are four distinct creatures in the movie, and this one’s named in the credits as “Berserker Predator”), though he does get a very necessary assist from injured IDF sniper Isabelle (Alice Braga).

Everyone’s exhausted and beat up, there’s heat signature-obscuring fires raging all around, and the Berserker drops his space axe, allowing Royce to go full Lizzie Borden on his gigantic neck. There’s slo-mo, there’s dramatic music, and while we don’t get any snappy one-liners, there is an awful lot of neon-green blood.

Our human heroes may still be stuck on a godforsaken planet, and they may be near death themselves, but for a tantalisingly brief moment… they get to bask in sweet success.

I am a huge fan of Predator 2 — it’s cheesy, yes, but it’s cheesy with gusto, and it makes the most of its Los Angeles setting, factoring in gang shoot-outs, perpetually sweaty police lieutenant Mike Harrigan (Danny Glover, leading a generally great cast), and lurid news (in the form of talk show host Morton Downey Jr, playing a sleazy reporter).

While real-life gang wars were a huge concern in LA circa 1990, Predator 2 makes the bad guys a comically evil (and certainly problematically stereotypical) “Jamaican voodoo posse”, very possibly chosen because the characters’ long dreadlocks mirror the Predator’s own hairstyle.

Anyway, for the first hour or so of the movie, the cops think they’re tracking a vicious serial killer, but King Willie, bloodthirsty leader of the voodoo underworld, knows “you can’t see the eyes of the demon until him come calling!”

Unfortunately, he never gets a chance to warn anyone other than Harrigan, because as soon as Willie’s alone again, the Predator appears, removes the kingpin’s head from his body, and then proceeds to coolly clean and buff the skull before adding it to his trophy collection.

Los Angeles is not especially known for its public transportation system, but Predator 2 finds a reason for cops Cantrell (Maria Conchita Alonso) and Lambert (Bill Paxton) to hop on the subway.

There’s an amusing wind-up to the Predator’s arrival when a near-mugging reveals that yes, everyone in LA carries a loaded gun at all times, but the scene turns spooky when Lambert’s left alone on a darkened car with a foe he can’t see and doesn’t understand. When he runs out of ammo, he flings a golf ball at the invisible figure and tries to square off with a giant knife, but it’s obviously too late.

The creature lurches at him (muttering “Want some candy,” ghoulishly echoing something he heard a child say in an earlier scene), and when Cantrell’s able to return to the car, she finds a pile of mutilated, grotesquely displayed bodies, including Lambert’s — as well as the waiting Predator, who lets her go after scanning her and realising she’s pregnant.

After all we’ve seen the Predator do, this act of mercy is actually pretty shocking, and it’s an affirmation that as brutal as the Predator is, he isn’t just a rampaging monster. He has a code.

That said, just moments later, we see him rip Lambert’s head off and take the spine out, too.

Mike Harrigan gets worked in this movie. First, he’s screamed at by LAPD higher-ups for sticking his nose into the voodoo wars. Then, he’s taken to task by the feds (led by Agent Keyes, a character that wouldn’t be half as weirdly energetic if he wasn’t played by Gary Busey), who further bulldozes his investigation.

Even after he learns what he’s up against — thanks to Keyes and company, who’ve known all kinds of top-secret info about the Predator this whole time — Harrigan doesn’t back off.

Instead, he goes the distance, pursuing the Predator not just through the halls of a crumbling apartment building, but all the way onto the spaceship, where we’re briefly distracted by a lingering shot of an Alien skull mounted in the trophy case before Harrigan manages to use one of the Predator’s own weapons to finally end things.

By now, of course, the fight has become deeply personal, since the creature has specifically targeted people close to Harrigan to make him the angriest possible opponent — and not only does the cop emerge victorious, he earns the respect of the several other Predators who suddenly materialise to offer their version of “Good game, dude, good game.”

3. The first bodies are discovered, Predator

My not-so-secret affection for the sequel aside, the 1987 original Predator is obviously the best movie in the series. If you didn’t know any better, you’d think you were settling in to watch a regular old combat flick such as Commando or the second Rambo movie.

A big part of the fun is realising, just like Arnold Schwarzenegger’s Dutch and his team, that the threat lurking in the jungle is so elusive and powerful because it’s not from this Earth.

One of the first huge clues that something is off about the mission comes in the film’s first 15 minutes, when Billy (Sonny Landham) happens to gaze into the treetops and spot three bright-red, completely skinned bodies dangling from their ankles… surrounded by screeching birds, to make things even creepier.

While you don’t actually see how the men got that way, it’s actually scarier that you don’t, and it makes the discovery of their bodies one of the best kills in the whole series. Right off the bat, you know that Predator is not messing around — and that whatever the title character turns out to be capable of, it’s going to be way worse than this glimpse that comes so early in the movie.

By the time Mac (the commanding Bill Duke) gets taken out, Dutch’s crew has a pretty good idea of what they’re battling, as well as the nightmarish realisation that they’re ill-equipped to challenge it.

Seething over the deaths of his friends, Mac plots to ambush the creature and settle the score, but it isn’t long until we see the Predator’s three dots of death settle on his forehead. The imminent blast that does him in douses the camera in blood, giving Predator one of its most impressively immersive moments of horror.

As if the scene where Schwarzenegger covers himself in mud (to disguise his heat signature) for a military-style duel to the death with the enormous alien killer who’s wiped out his entire team — a scene in which he gets to call his opponent “one ugly motherfucker” — would be anywhere except at the very top of this list.

Detail-oriented types will note that Dutch doesn’t actually kill the Predator, though he does severely wound him — the Predator sets off a powerful explosive that ends up finishing the job, as a shell-shocked Dutch manages to sprint to safety.

Even without this finale, Predator would still rank among one of the most entertaining sci-fi action movies ever, but this epic, primal brawl seals its reputation as one of the all-time greats.