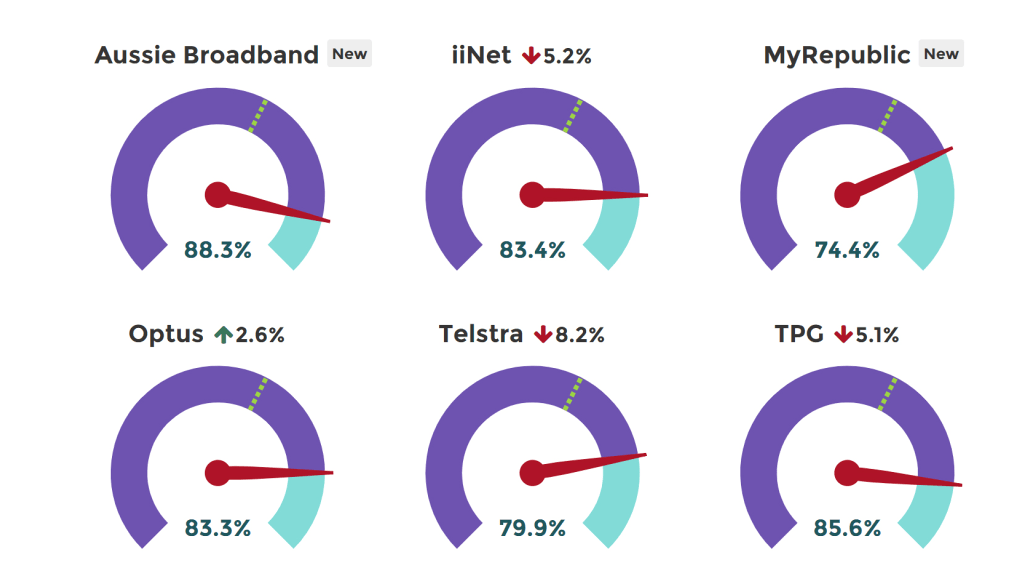 Seven per cent of NBN customers receive less than half of the maximum speed promised by their plan, according to the Australian Competition and Consumer Commission’s second ‘Measuring Broadband Australia’ report. Meanwhile, one third of NBN users are getting less than 90 per cent of their promised speeds.

A couple in Victoria has been told they will have to pay up to $1.2 million to get the NBN, but Communications Minister Mitch Fifield say they have a choice of how they connect to the network.

Aussie Broadband leads the pack in terms of performance, delivering 89.1 per cent of maximum plan speeds during the day. Speeds drop around 1 per cent during peak times between 7 and 11pm.

Meanwhile, MyRepublic brings up the rear, only delivering 79.5 per cent of maximum plan speeds during the day, with speeds dropping around 6 per cent in peak times.

The results show little improvement on the ACCC’s first report in March, introduced to regularly measure the real-world speeds of around 800 NBN and ADSL fixed-line services across the country.

Efforts by the ACCC to hold retailers to account came after the NBN cut wholesale access and bandwidth costs for telcos last year, in order to make 50 Mbps plans more affordable.

With speeds not reducing “significantly” during peak hours in the latest report, the consumer watchdog is “encouraged” with the results, says ACCC chair Rod Sims.

Percentage of NBN plan speed (downloads) delivered during busy periods. The arrows indicates whether each telco’s score has gone up or down compared to last quarter

His is particularly pleased considering that more NBN customers are switching to higher speed plans, where the physical limits of the connection have more of an impact on speeds as well as the retailers’ bandwidth agreements with NBN.

“Whilst we are pleased to see that most customers are able to get fast, reliable broadband services even during busy hours, we must focus our attention on those who do not have this experience,” Sims says.

“We urge providers to help customers obtain the full speeds associated with the plans they are acquiring. We also expect ISPs to inform customers of the speeds achievable on their network connections, and better match the plans they offer to those speeds. The recent court enforceable undertakings accepted by the ACCC will help with this.”

While ISPs are struggling to achieve maximum plan speeds, they are are delivering on advertised speeds as instructed by the ACCC, says Communications Alliance chief John Stanton, who represents Australian internet retailers.

“The service providers achieved an average of 99.9 per cent of their advertised speeds, excluding the one provider that does not advertise typical busy hour speeds,” Stanton says.

“This is an excellent result, showing that customers are receiving the service performance that has been promised and they have purchased.”

Stanton is disappointed that the ACCC’s report only lists maximum speeds and does not also include advertised speeds.

“This is unfortunate, given that the ACCC has issued guidance – and providers have entered enforceable undertakings in accordance with it – that providers should not make claims around maximum plan speeds, and instead should advertise based on information about ‘typical busy hour speeds’.”

The Australian Communications and Media Authority recently released new NBN Service Continuity Standards which force all internet service providers to test individual connections, to ensure they are not charging customers for unobtainable speeds.

Several NBN retailers have already been forced to refund customers after charging for download speeds that could not be delivered.

The new standards do not state what is to be done if an NBN connection can not deliver promised speeds. Under the “performance objectives” set out in its wholesale agreement with retailers, NBN only commits to repairing services which can’t deliver download speeds of 25 Mbps and uploads of 5 Mbps.

While the NBN promises minimum speeds when providing wholesale connections to retailers, such as Telstra and Optus, it makes no such promise to end users. This needs to change, says Teresa Corbin, chief executive of the Australian Communications Consumer Action Network.

“For those consumers on underperforming services, it is important that service providers and NBN Co take steps to ensure that consumers are getting the speeds they are paying for,” Corbin says.

“But we would like to see an end-user service guarantee that defines a minimum standard for customer NBN connections, rather than rules which merely ensure that retailers don’t sell plans that surpass whatever speeds a connection happens to deliver.”