Seven years after pushing the “phablet” concept into the mainstream, Samsung’s Galaxy Note line finds itself in the odd position of being a big phone in a market flooded with big phones. A victim of its own success, the Note9 now struggles to stand out on the basis of its size alone, even against Samsung’s own similarly big S9+.

But the phone is distinct from the rest of the pack in some ways. With a number of technical improvements over last year’s model, the highest-end specs that could be crammed into a consumer phone while keeping it even remotely affordable and, of course, that ever-present S-Pen stylus, the Note9 at least proves there’s room enough for two big flagships in Samsung’s lineup.

If only there was more room in my pockets.

It’s said to be a ‘more intelligent camera’ but do its video capabilities stack up?

At 162mm tall — 3.5cm taller than the hulking iPhone 8 Plus — there are some pants that simply won’t accommodate the Note9. And yet it sports a very streamlined look. It’s quite a bit narrower than the iPhone, making for an easier hold and a screen with a skinnier aspect ratio than most (though not as skinny as some), at 18.5:9. This means that the screen itself is certainly one of the biggest you’ll find on a phone, at 6.4-inches diagonally, and it’s amazingly bright and sharp.

Samsung fans will immediately notice that, from the outside, the Note9 is a cross between last year’s Note8 and this year’s S9+. As with the S9+, the fingerprint scanner has been moved to a much more logical place below the main camera array (which is itself the same as the S9+’s dual camera setup, and very similar to the Note8’s). There’s also a stereo speaker setup for the first time on a Note phone. One criticism to make here is that the rear of the Note is in desperate need of a rethink, with the rectangular camera array making it look quite dated compared to the S9.

Internally too, the phone has inherited the octa-core processor seen in the S9+. But it’s the differences between the Note9 and the other devices that show where Samsung’s priorities lie.

The Note9 is noticeably thicker than its predecessor, and heavier too, which is unusual in the world of ever-thinning flagship phones. The change is no doubt to facilitate the big 4000mAh battery, a significant upgrade over the Note8’s 3300mAh. With normal use I’ve been getting to the end of the day with almost 50 per cent battery, which is great, although your mileage will obviously vary depending on how much stress you put on your phone.

The screen is bigger than last year too. It isn’t much of a difference, but it does increase the difference between the Note9 and S9+ (which had a screen dangerously close to the size of the Note8).

Internally there’s also a more complex heat dissipation system, which should theoretically let the phone continue to work under heavy load — playing 3D games or connecting to a hub to use it like a PC via Samsung’s DeX system — without throttling performance.

Of course, the other main differentiating factor is the included stylus. The S Pen can still be used to take notes directly on the screen, even when it’s locked, or for a range of writing and illustration tasks. If you are using DeX, this makes the Note9 a PC and drawing tablet rolled into one.

But for the first time, the S Pen also connects to the phone using Bluetooth, meaning you can use it as a remote for taking photos, playing and pausing music, starting and stopping a recording, or controlling a presentation. As with most of the phone’s special features, this probably won’t appeal to the large majority of customers, but the few who have cause to use it will find it works very well.

This year’s Note is pricier too. You have a choice between a model with a generous 128GB of storage for $1499, or a frankly excessive 512GB for $1799. Given the Note9 features a MicroSD card reader, it’s hard to imagine needing half a terabyte built in.

Taking a leaf out of the computer manufacturer’s playbook, Samsung is equipping its more expensive model with more RAM (8GB versus 6GB), meaning if you want top performance you have to take the extra storage as well. Excessive though it may be, the most expensive Note9 could be the perfect device for those serious about making their phone a full-time PC replacement or gaming system. 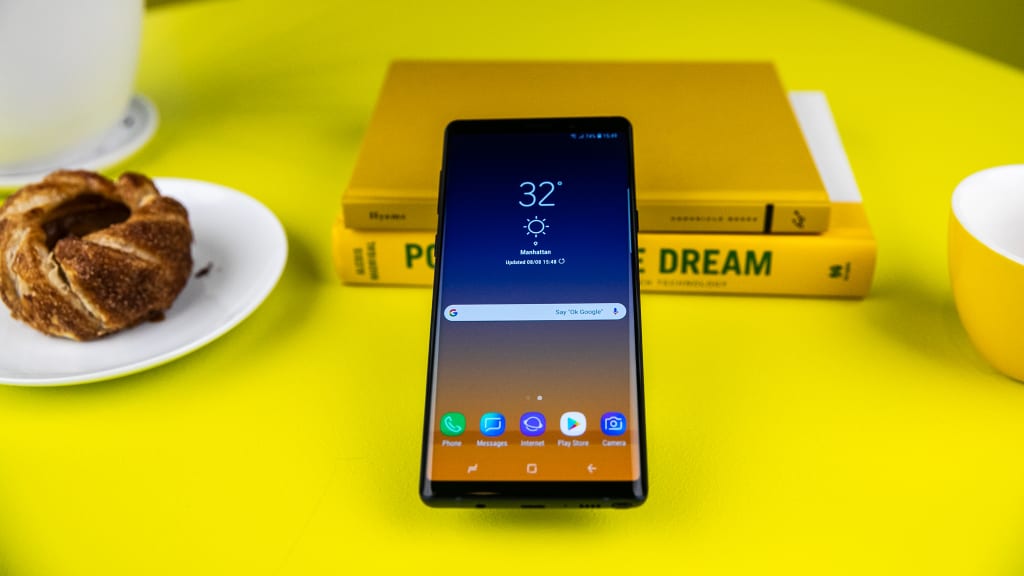 The Note9 comes optionally with 512GB of storage built in.

Of course, when you’re not pushing the device to the limit or using the pen, the Note9 is very similar to this year’s S phones. It’s bigger, more expensive, more capable, and essentially the only choice if you want a 2018 phone built with a stylus in mind, but otherwise, it’s a third version of the S9.

And with that comes the same advantages and disadvantages of Samsung’s most recent flagships.

It’s disappointing, though understandable, that Samsung has failed to include the latest Android 9 Pie (the Note9 ships with 8.1 Oreo), but as with the S9, I found that the”Samsung Experience” wrapper installed here doesn’t really improve Android Oreo in any measurable way.

There’s a base level of flexibility when it comes to customising your device, as per the standard Android setup, but Samsung’s additions are more reminiscent of Apple’s locked-down walled garden approach, frequently pushing you to use its own software and sync to a Samsung Account.

For example, if you take the S Pen out while the screen is off and make a note, it’s saved to Samsung Notes, which you need to sign in to if you want it to back up. There’s no easy way to move this functionality to Keep, Evernote or OneNote instead.

The biggest issue is the sheer number of options for every aspect of the phone’s operation as if Samsung has been unwilling to edit anything out as it adds more every year. You can make the edges of the phone flash when you get a notification, so it’s visible while face down. There’s “FaceWidgets” to configure for the lock screen, and “Smart Stay” to keep your screen on while the phone can detect your face. A lot of the stuff is just on by default and you have to search through the bloated settings to find it if, for example, your phone keeps randomly vibrating when you pick it up and you don’t know why, or you have no need of one of the multiple additional places you can add app shortcuts.

It’s a similar story with the hardware gimmicks. I’m not entirely sure why there’s an iPhone-style pressure sensitive home button, or why you have the choice of fingerprint, face detection or an uncomfortable iris scanner (with health warnings!) to unlock your phone. And the dedicated Bixby Button only served to remind me that I never want to use Samsung’s AI when Google Assistant is an option (and it is on the Note9, thankfully). But none of this is likely to bother those already familiar with the many and varied bells and whistles Samsung has gradually built over the years.

Overall this is a supercharged, stylus-toting S9, which makes it one of the most consistent and powerful big phones you can get, as well as the only one with a stylus built in. Samsung’s packed the Note9 with all the best display, camera and processing equipment it currently has, and my only major complaint is that it probably does too much.