Rare Movie Posters Go Up For Auction, Including The World’s First 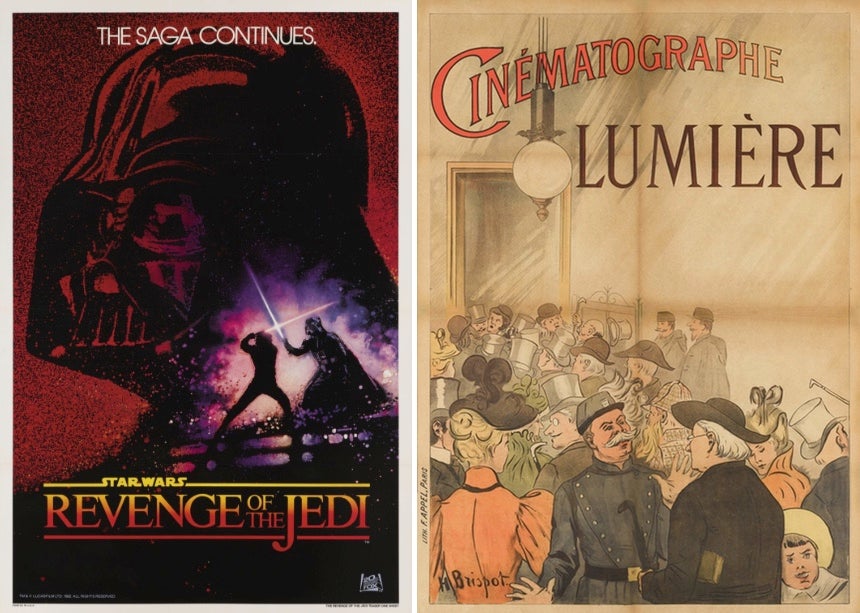 Rare movie posters are going up for sale later this month in a Sotheby’s auction that includes a very special find: The world’s first movie poster, according to the Guardian, created in 1895.

The poster, designed by French artist Henri Brispot, was made in France in 1895 to advertise a showing of short films by the Lumière brothers. But unlike modern movie posters, it didn’t depict the subject of the movies. Instead, it showed an illustration of people lining up to see the first-ever screening of a movie on December 28, 1895.

As the Guardian notes, the first, 20-minute-long screening was attended by fewer than 30 people at the Salon Indien, but there was room enough for 100. Newspaper reporters didn’t bother with the newfangled technology at first, although the movie poster turned out to be quite fanciful, depicting a huge crowd hoping to see the new magic of cinema.

From the Sotheby’s description:

The screening included a selection of the Lumière’s short films, each film lasting no more than a minute. Some greeted the screening with suspicion, whereas others seemed utterly shocked by the experience. When the lights went down, Perrot relates that one lady uttered a shriek of terror.

Later on, there was wide spread talk of magic and trickery, as though the moving images were the ruse of a clever conjurer. One man complained that it was unfair to make a mockery of the public in such a way. Members of the press who had been invited to the screening did not show up, although surprisingly, within two days of December 28, it was featured in most newspapers.

Now a piece of that history can be yours, provided you have at least $US40,000 ($54,981) lying around. The poster is expected to get at least that much when bidding starts on August 28.

Posters for classic Hollywood movies like Sunset Boulevard (1950) and even a special lobby card for It’s a Wonderful Life (1946) that was signed by Jimmy Stewart are up for sale as well.

The auction has a very rare Revenge of the Jedi poster, the original name for Return of the Jedi before George Lucas decided that Jedis wouldn’t take revenge. Posters were even made up using the “revenge” title, but were withdrawn, making the original posters quite valuable.

There are also some very cool international posters that American poster enthusiasts might not be familiar with, including a very unique Swedish poster for the 1944 classic To Have and Have Not with Humphrey Bogart and Lauren Bacall.

A Japanese poster for the Vietnam War epic Apocalypse Now (1979) is also unlike most of the American marketing that took place for the film.

But it’s not just posters. All manner of advertising material for pop culture is being auctioned off, including a standee for a record-book combo that was tied to Disney’s Fun and Fancy Free movie, released in 1947.

The auction even has some “preliminary artwork” for some films, including a stunning painting for Gone With the Wind (1939).

Bidding starts on August 28, 2018 at 10am ET and it’s possible to submit your bid online. The collection is available for viewing at Sotheby’s in London.