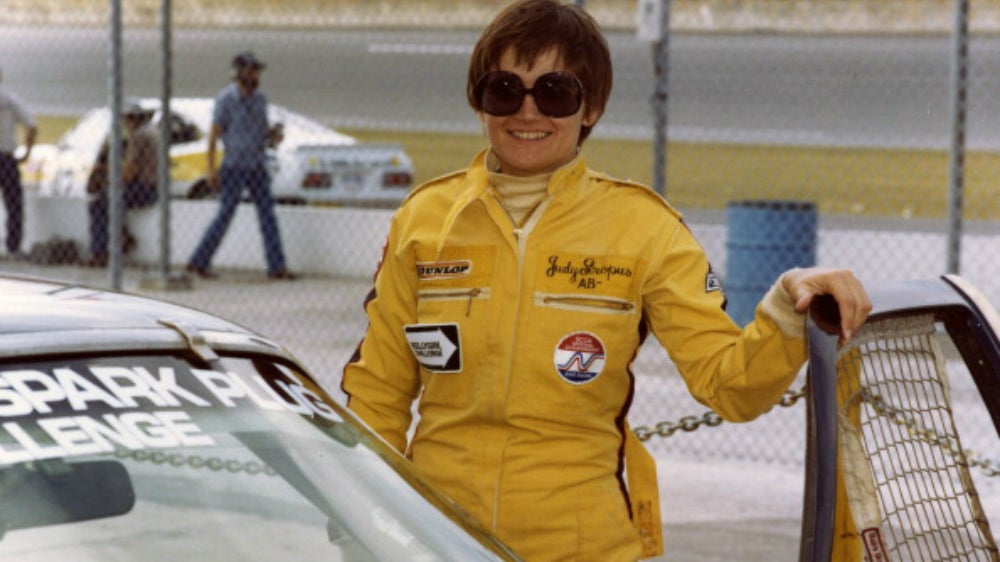 If you watch pretty much any form of motorsport, chances are you’ve heard the name Penske. Roger Penske built his racing empire from the ground up in the mid-20th century, and the team has been successful at just about everything they have tried. But back in the day, before all the fancy technology came to the fore of racing, all Penske had was Judy Stropus.


Born in Lithuania, Stropus made her way to the United States in 1949 and learned two important skills: how to speak English, and how to drive on a Jaguar XK120.

Stropus’ claim to fame — and possibly the skill that helped give Penske the edge over the competition in the 60s and 70s — was her incredible skill at timing and scoring. That might seem easy to us now, but back then, all Stropus had was a stopwatch, a scoring sheet, and the impeccable ability to track each car with an almost computer-like efficiency.

If you’ve ever been at the track and pulled out your phone to time laps, you know that shit is hard. You have to be constantly on top of your game. You have to have catch-a-fly-mid-buzz-with-chopsticks reflexes. And you sure as hell have to have the endurance to do that lap after lap after lap. It’s tough. Chances are (if you’re anything like me), you give it up after a while and let an app do the research for you.

But to Stropus, it seemed easy. In an interview with Daily Sportscar, she recounts learning the trade with the Queens Sports Car Club. Once Lee Sorrentino showed her the ropes, Stropus wondered, “Is that all there is to it?” Yeah. That’s probably not the reaction most of us would have had.

She didn’t intend for timing and scoring to really become a career, though. By the time she started, Stropus had been in the US for about twenty years and had tried her hand at racing with various clubs and was editing a newsletter. After working a five-hour Trans Am race — working it perfectly, I might add — Stropus decided she was all done. She accepted the job because she just happened to already be at the track, but she felt it was time to wrap things up in the racing world. Time to pack up, move on, and see what else the world had to offer.

But Stropus’ talent didn’t go unnoticed. She was offered an all-expenses-paid season with Bud Moore (which doesn’t even include the pay she received) until they hired a friend to do their timing and scoring. So, she retired again — at least, until Jim Jeffords from Javelin gave her a call. Her name was making rounds in the motorsport world, and there was no way anyone was going to let her retire in peace.

Halfway through that season, Roger Penske approached her with one question: “Why are you not working for me?” Now, not gonna lie — if Roger Penske asked me that, I would 100 per cent drop whatever I was doing and sign up with him.

Stropus worked with Penske for about seven years, often assigned to track Mark Donohue’s cars. It was with Penske that she performed some of her most impressive feats. Such as, for example, keeping score of 24-hour races at Daytona and Le Mans without a break and without losing her edge.

By the time she wrapped up work with Penske, Stropus was a hot commodity. She found a way to split her duties between multiple race teams that would keep the costs down for everyone else.

But around that time, computerised timing and scoring systems were coming to the fore. For as reliable as Stropus was, most teams were looking for ways to cut back on any possible human error, and after thirteen years of an unexpected career, Stropus found that she wasn’t in high demand anymore. So she hung up the stop watch and decided to call it a day.

That doesn’t mean she gave up racing entirely, though. While she was tracking lap times, Stropus had also started handling PR duties for Chevrolet, Bob Akin Racing, Brumos Racing, and more with her own business, JVS Enterprises. It seemed like a great way to keep a foot in the door and keep participating in the sport she loved, and she soon saw her clientele expanding to include BMW North America, Duracell, Pirelli, Mattel, Dunlop — the list goes on and on. She even started working with TV networks like CBS, TNN, ABC, and ESPN to increase brand marketability and increase the demand of her own business.

Not a half bad career for someone who was ready to retire in the early 60s.

And since she was at the tracks anyway, Stropus honed her skills behind the wheel, too. She earned her national SCCA licence and raced in plenty of events, most notably in the National Runoffs in 1979, the Volkswagen Cup, and even the Cannonball Run. Hell, she still goes out to compete in karting events. This woman just can’t get enough.

Today, Stropus is still active in the racing world. She won the Road Racing Drivers Club Bob Akin award in 2016, due to her undying passion for motorsport and her contributions to the racing community. She was nominated for the International Motor Sports Hall of Fame sports car racing award in 2017. She’s still running her PR business, works on special motorsport projects for organisations like the RRDC and more, and continues to be an inspiration for just how successful a woman can truly be in racing.

To put it in a nutshell, Stropus is a badass. She essentially defined and refined the standards for timing and scoring and sketched them out for others to follow in her book The Stropus Guide to Auto Race Timing and Scoring (if any of you can dig that out of an archive somewhere for me, I’d be eternally grateful). For her, racing was both an art and a passion, and her contributions resonated in the success of the teams she worked with and in the sport overall.

She’s one of those behind-the-scenes figures that deserves as much recognition as the flashy camera-friendly drivers who spend their time in the spotlight. Judy Stropus is most definitely a racing legend.