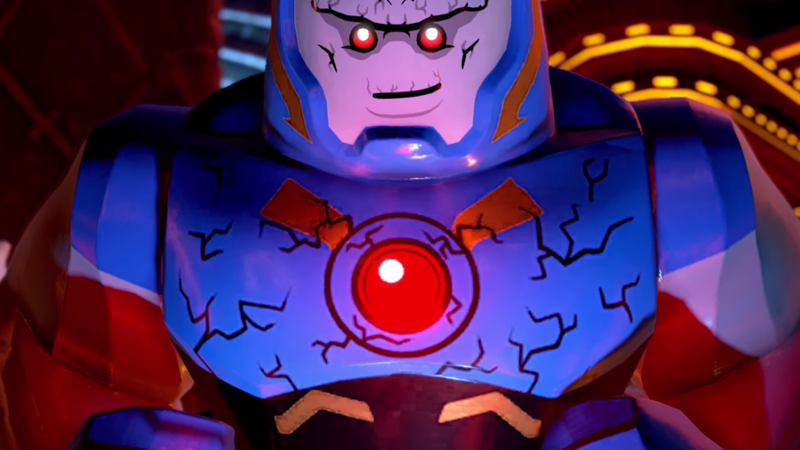 I mean, who else will threaten to take over the world if some bigger bad guy comes and tries to do it first?

The first trailer for Traveller’s Tales’ latest entry into the vast pantheon of LEGO-based video games was shown a few months ago at Comic-Con. It introduced us to the basic premise that the Crime Syndicate — in disguise as the totally-not-sinister Justice Syndicate — is trying to take over the world, leading to a haphazard alliance between the villains of the DC universe (including the player’s own customisable, self-made baddie) to stop them. So… that they can take over the world instead.

But the newest trailer for the game shows that there’s much more going on than just some Justice League-copying bad guys showing up to spoil the fun: none other than Darkseid himself is behind it all, working in the shadows to get the Syndicate to find the anti-life equation so he can finally dominate the cosmos.

Well, I say from the shadows, but he’s hardly too mysterious about it, given that Apokalips literally shows up in Earth’s orbit while Darkseid goes on TV to let Earth know its days of freedom are numbered. That’s just the Apokaliptan style of subterfuge, I guess.

It’s all very goofy fun (especially in that you can make your own “rookie” villain look as absurd as any D-List silver age DC rogue could), but it’s a shame you’re not actually going up against the DC heroes of the world, and just taking on a meaner set of bad guys. Who knows, maybe once Harley, Joker, Lex, and the rest of the gang are done beating up Darkseid, the good guys will show up for their own showdown too?

We’ll have to wait and see — LEGO DC Super-Villains hits PC, Xbox One, PS4, and Switch on October 16.