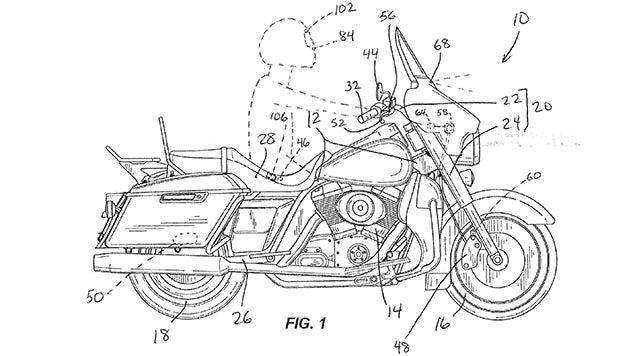 Image: US Patent Office via Motorcycle.com

Luxury automobiles have featured radar-based adaptive cruise control with emergency braking for several years, and the technology has found its way down market, trickling down to workaday cars, trucks, and SUVs in recent model years. Harley Davidson hopes to bring similarly advanced crash avoidance tech to their two-wheeled conveyances, if this patent filing is any indication.

Bosch is already developing a similar system for KTM and Ducati, and Honda is independently developing their own emergency braking system as well. It seems that this is definitely the future of motorcycling, so be prepared for that when the time comes. Your new bike purchase could, in the next few years, do some braking and avoidance for you.

Obviously, because motorcycles don’t have the stability of a four-wheeled vehicle, some extra precautions have to be taken in the advancements of automated braking tech. Their idea to ensure this doesn’t cause an incident instead of mitigate one involves rider monitoring tech. Basically, there are sensors in both handle grips, a weight sensor on the seat, and a driver attentiveness monitoring sensor in the dash to determine if you’re in a riding position that would allow the bike to slam on the brakes without throwing you off.

As a rider that has put a bike down at speed, I see both positives and negatives in this technological advancement. I personally don’t like the idea of anything actuating the brakes but my right hand and right foot, but I’m definitely an advocate for anything that makes motorcycles safer. That said, I’ve also had emergency braking save my arse a few times in a car. My primary concern is that if this system only works when you are riding heads up with both hands on the handlebars and your seat in the saddle, why couldn’t you simply brake of your own volition? It’s difficult to say yet how this will change riding in the future, but it looks like it will be unavoidable soon.