Blue Lola headphones are available in two colours, black or white. But not blue. Blue is the brand name, an acronym for Baltic Latvian Universal Electronics. But the company’s location is nowhere near the Baltic, it’s in Westlake Village, California. Westlake Village is not a village, it’s a city. I’ll try to make the rest of this less confusing.

Blue was started in 1995 by a Latvian recording engineer and an American session musician and made its name with microphones that have found their way into plenty of studios. Lately, it has been shooting for a wider market with we non-professionals; as well as a really neat little stereo microphone that slides into an iPhone, it’s making headphones. I guess because headphones are all the buzz, and the tech involved is not much of a stretch from microphones.

The Blue Lola has a unique aesthetic.

So here we are with Blue Lola headphones at $449.95, the unique aesthetics of which will certainly catch your eye along the rows of headphones at your local retailer. The earpads are mounted to the headband by a sort of double-jointed lever arrangement that looks all wrong for comfort but actually works very effectively, and when it’s on your head you can’t see it anyway.

The earcups remain approximately parallel when moved apart and the assembly scissors down onto your ears in a delightfully simple and easy adjustment. Together with excellent cushions, it makes the Lolas comfortable for hours on end. Blue modestly declares this design to be both visionary and revolutionary and says ordinary headbands are ‘uncomfortable’ and ‘kill sound quality’, statements so silly one wonders about the rest of the stuff on its website.

The Lolas are over-ear headphones with sealed backs, and this together with an effective seal around the ears by the cushions isolates the listener from the outside world nicely. It also means sound doesn’t leak out to annoy the other people on the bus. 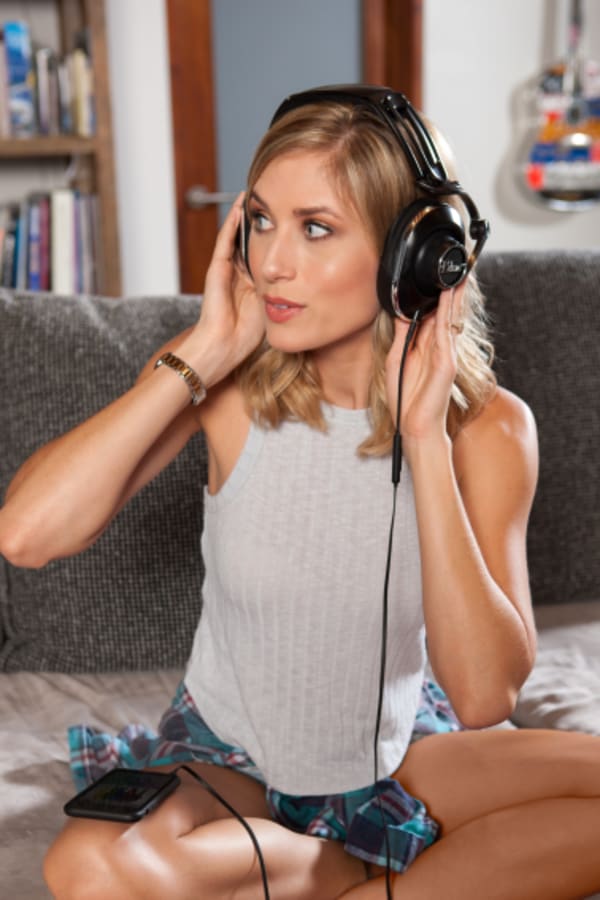 First impressions were good. They’re supplied with a three-metre cable for listening at home and a 1.2-metre cable for commuting, complete with iPhone controls. You also get a soft carry bag. The thing that didn’t impress me was that there is no marking anywhere to indicate which is the left earcup and which is the right. Given their unique headband mounting arrangement, I’d put money on lots of people getting this wrong. Read the brief instruction leaflet and you’ll find the cable plugs into the left cup, the only hint I could find.

So, crank them up. The Lola’s star turn is the 50mm driver in each cup. These are big for headphones and theoretically should cover full range music more accurately. And having resisted the urge to be cordless or noise cancelling, and thus directing more of your money towards sound quality, they sound good. The bass is pronounced without being overpowering, the mids are strong and the highs are accurate and remain so right up there to the extremes of the piccolo. Definition favours the mellow end of the scale rather than the sharp, which means that Zoe Keating’s plucking of her cello strings in Optimist sounds a little less precise. The Lolas also have momentary difficulty with the demanding bass line in Good Vibrations when it’s really down there underlining the organ riff. So do lots of headphones, and speakers for that matter, only less so.

If you can forgive these rare and admittedly rather minor transgressions (although I doubt Brian Wilson could) and their love ‘em or hate ‘em looks, the Lolas are entirely acceptable all-rounders for the money.