When I got on the phone with Grant Petty, CEO of Melbourne’s Blackmagic Design, I expected the standard product interview; PR polished and full of buzzwords and hype. Instead, Petty described the Blackmagic Design eGPU (external graphics processing unit) in refreshingly simple language, before talking at length about software subscription models, and why he hates the trend.

Apple has recently faced criticism from some of its most vocal power users, the complaint being the company is too obsessed with making its laptops thin and light, which leads to compromises in power. Blackmagic’s machine, which can be docked with a laptop to give it far superior graphics processing capabilities, is such a good fit that Apple featured it specifically at its most recent press event alongside new Pro laptops.

“You have a big, powerful GPU in a box, and when you plug into it, it makes your laptop a desktop powerful machine. Simple as that, really,” said Petty said, who doesn’t think Apple has made the wrong call in terms of power.

“I’m not really sure where that criticism comes from. It’s easy to criticise Apple, but designing a laptop is always going to be about compromise,” he said.

“A Macbook has to be used under so many varying conditions. If you’re on a train or a tram and you doing some work, you really want the laptop to back off and use minimal power. I think it’s extraordinary what these laptops can do, when you consider what we ask them to do. We want all-day battery life, we want portability … but as soon as you dock in you want as much power as possible.”

And that’s where an eGPU comes in.

The $1149 device is sold exclusively through Apple stores, connects to a Mac through Thunderbolt 3 lends the machine the power of a Radeon Pro 580 graphics processor with 8GB of memory, plus a hub of additional ports.

“A lot of our customers are on set, on their laptops all day. And when they get back to the studio, they want to keep using their laptops. They don’t want to have to transfer gigabytes of data to a desktop machine to keep working,” Petty says.

With all their equipment and displays wired through the eGPU at their workspace, users can turn their laptop from a portable device to a desktop-class device by plugging in a single cable.

Blackmagic Design started in Melbourne back in 2001 and has since become an international company with offices and factories around the world, but a lot of “the difficult stuff, the tv stuff”, is still produced out of a factory in Port Melbourne.

“Outsourcing is a bad model, because every time you want to do something, you’ve got to go through some business development guy in a different company to get it done,” Petty says.

“That’s why we try to keep the talent in-house, so we can move really quickly.”

Blackmagic is one of the few tech companies — like Apple — which can produce high-quality hardware as well as software. Along with high-end studio equipment, the company also makes DaVinci Resolve, a video editing and colour grading suite, for Windows, Mac and Linux. While not naming names, Petty is quite damning on the subscription model of DaVinci’s competitors. 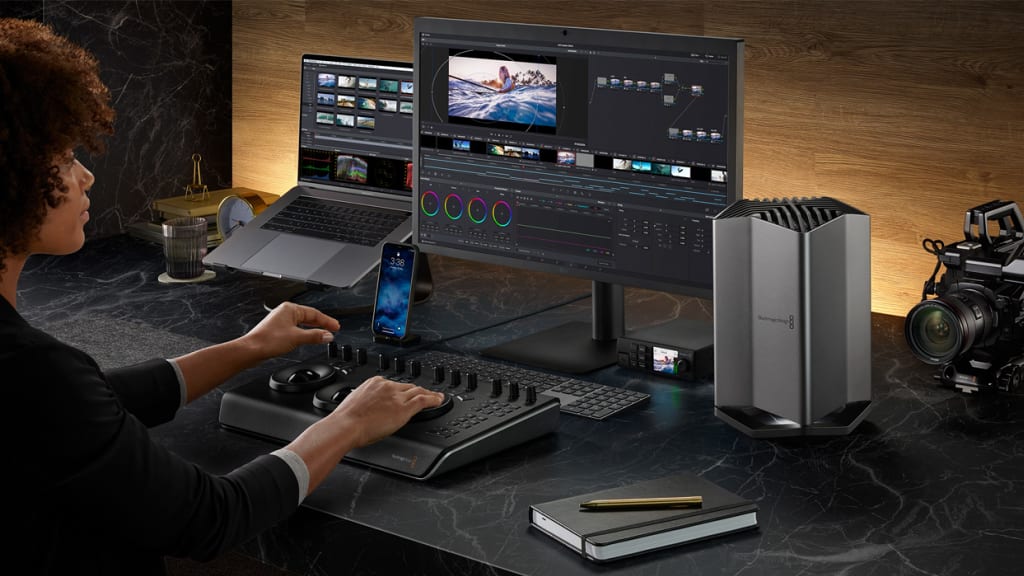 Blackmagic makes hardware and software for video production, although its eGPU is just as suited to gaming or VR.

“There’s a growing cloud model of software, where people kind of get enslaved by their software; you’ve got to pay up every month or you’re literally locked out of your work. I really reject that and think that’s the worst possible way to charge someone who’s creative.

“Creative people need to experiment, and often can’t tell when they’re going to make money. So our model [with DaVinci Resolve] is releasing a product that’s complete — for free — and let people get it, use it, depend on it. Then as they grow and become successful, then you can have a paid version. So we only really charge for the collaboration, cinema authoring and integration with some pretty high-end hardware, because if you’re in that workflow, you’re pretty successful.”

“A lot of businesses probably have a couple of old systems around from 10 years ago, with some old projects or old files on them; old accounting software, old architecture plans, whatever it might be. Those old computers with the old business plans sometimes need to be used ten to twenty years into the future,” he said.

“And I don’t think anyone’s really understood that with a cloud model, you’ve got a good chance of not being able to access a huge amount of that work that’s being generated in 30 years time. And I think that’s got real ramifications.

“Software companies love to dump support for older file formats and things as they move forward. And it’s so hostile to the customer, it enslaves them. The cloud model is being driven by metrics and revenue, it’s not being driven by what makes the customer happy.”