Artists Heading To Dungeons & Dragons Session Say ICE Detained Them, Would Not Allow Them Entry To US 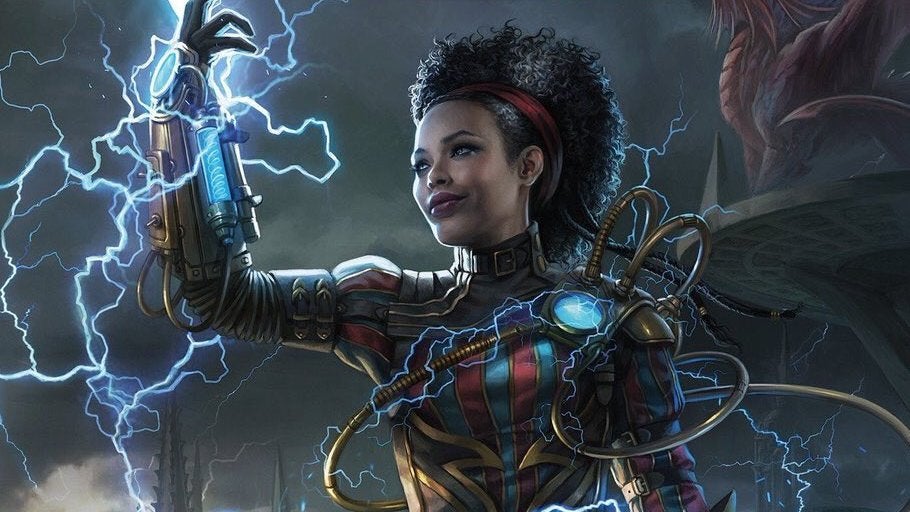 Three artists travelling to Wizards of the Coast’s headquarters to join the latest Dungeons & Dragons brainstorming session were reportedly denied entry into the United States and sent back to their home countries over issues with their visa waivers.

Over the weekend, Magic: The Gathering artists Anna Steinbauer, Magali Villeneuve, and Titus Lunter—from Austria, France, and the Netherlands, respectively—shared reports of being detained at the Seattle–Tacoma International Airport, also called Sea-Tac, by immigration officials. They were headed to Wizards of the Coast’s headquarters in Renton, Washington for a Dungeons & Dragons “concept push,” or a several-week meeting to bounce ideas back and forth for upcoming content. The story first surfaced on Villeneuve’s Twitter thanks to her husband, who expressed concerns about the artists’ safety as their phones, passports, and luggage had been taken away, leaving them cut off from anyone who could help them.

*Alex*
Magali was detained at customs with some other members of the team who were to work at WotC.
Apparently they won't let them back into the country.
they took Magali's phone, I could only talk to her for a minute.

According to Lunter, they were pulled out of customs by immigration officers and taken to a separate detainment area. There they were told that they were violating the conditions of their Electronic System for Travel Authorization, or ESTA visa waivers—an automated system that determines people’s eligibility to visit the U.S. without a visa—and would be sent home. However, no flights back to their home countries were available until the next day, so they say they were handed over to U.S. Immigration and Customs Enforcement (ICE) who allegedly lead them out of the airport in handcuffs and detained them overnight.

Here’s Lunter’s description of what happened, as he shared on Twitter:

Because of regulations, after six hours of interviewing and waiting, we were handcuffed and taken, through the airport, to an ICE detention centre 30 minutes outside of the airport. Here we were booked and checked into our jail cells. These are, as you can imagine, austere and not comfy. There were no beds but we were given a blanket and some sanitation utensils. We would spend 11 hours here, we were fed and had access to water. To me, the whole experience was very traumatising.

In the morning we were cuffed, put into transport and escorted back to the airport where we would wait in uncertainty about our flight status. Some friendly personnel allowed us another phone call to let people know. After that, we were escorted by police to our gate for our flight and our stuff would be returned to us upon arrival.

io9 reached out to the artists for additional comment on the situation, as well as Wizards of the Coast, and will update should we hear back. The company did release a statement through its Magic: The Gathering Twitter account, saying it’s in contact with the illustrators and that they will continue to work on Magic and Dungeons & Dragons. And in a statement to the blog Hipsters of the Coast, Villeneuve confirmed that Wizards of the Coast have been working with her and the others to address the issue, and doesn’t think the company should shoulder the blame over what transpired:

[Wizards of the Coast’s] people are working hard to help us out. The priority for them (and that makes me happy and comforted) is not to give a public explanation: It is to do whatever they can so our careers won’t have to suffer from US borders’ extreme ways of dealing with people from the outside. They are worried for us, many of them are good friends and they understand all the consequences of what happened at Sea-Tac. We need help and they’re giving it.

I wish the [Dungeons & Dragons] community would have other use of its own strength than creating drama like “The huge company doing nothing for the poor little illustrators.” This is not what’s happening.

The ESTA visa does not guarantee admission—that’s something U.S. Customs and Border Protection officers determine upon arrival. One condition of eligibility for an ESTA visa waiver is that you cannot be paid by an American company for work while you’re there. You can attend business meetings, but cannot do any paid work. There’s no confirmation whether the artists were being paid for their participation in the Dungeons & Dragons concept push—we asked Wizards of the Coast to clarify this for us—but here’s a description of a concept push by senior art director Richard Whitters, from a 2017 interview in Forbes:

We do, I think, probably three or four a year, concept pushes, where we bring in two to four artists. For a three week period, we basically just jam on whatever the thing is that we’re currently working on. We just try to visually explore all the different ideas. And like I said, we’re trying to push it, push the boundaries of it, and say, “Does this work here? Does this not work here?”

It does seem possible that some form of compensation was involved, or that other matters of the contract negotiation fell into what Lunter called the “grey area” of what immigration officials deemed unacceptable for a visa waiver. But the situation is also certainly connected to the Trump administration’s hawkish enforcement of immigration policy, which has targeted everyone from undocumented families seeking to flee violence to people trying to enter the country legally. The policies may not have changed, but their application has.

Lunter, Steinbauer, and Villeneuve are all back safe in their home countries, but Lunter said on Twitter that each of them had their ESTA eligibility permanently cancelled. This means that, if they ever want to return to the United States, they will have to apply for full visas.