Alcatel 1C Review: An $89 Smartphone With (Some) Flagship Features

Flagship phones might grab the headlines, but not everyone wants to spend top dollar. In fact, the lion’s share of Android smartphone sales now come from the budget sub-$200 segment.

As manufacturers continue to push the envelope in the premium end of the market, the trickle-down effect of technology has resulted in better quality smartphones at the budget end.

Cue the Alcatel 1C from TCL which offers a few features normally reserved for pricier handsets such as a tall 18:9 display and a fingerprint scanner, all for under $100. There are, of course, some caveats.

The Alcatel 1C is better than you’d expect for $89, but you do have to stick to the slow lane.

The fingerprint scanner isn’t the fastest nor is it the most consistent, and the 5.3-inch display suffers from poor viewing angles and sharpness with its 960 x 480 resolution. It isn’t particularly bright either, making it difficult to use the phone while outdoors under direct sunlight. However, it’s adequate for the market that Alcatel is chasing here which is primarily kids or seniors looking for their first smartphone.

Alcatel’s target audience is reflected in its software as well with its custom skin running on top of Android 7.0 Nougat, packing big and colourful app icons and a streamlined interface that is simple to navigate. Surprisingly, Alcatel has decided not to go with Android Go; a stripped-down version of Android 8.0 Oreo designed to run efficiently on entry-level smartphones. 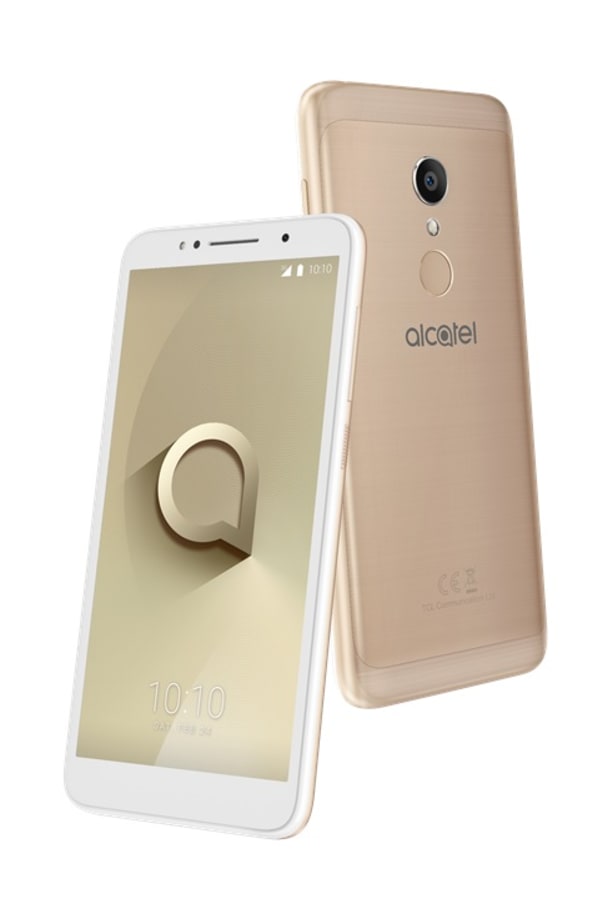 The tall, modern screen gives the 1C a look far above its price.

The 1GB of RAM onboard the 1C is barely enough to run the full version of Android and it shows with a noticeable delay between taps and the occasional stutter when scrolling through web pages. Apps take a while to load after you launch them and switching between open apps is typically accompanied by refreshes as there isn’t enough RAM to hold more than a few apps in memory.

That said, performance is more than acceptable for an $89 smartphone and there’s plenty of space for storing apps and pictures thanks to the 16GB of internal storage and a microSD card slot for expanding space. We did find that the 1C had difficulty recognising microSD cards above 32GB in capacity, so it would be best to stick to smaller cards.

The 1C comes with an 8MP rear shooter accompanied by an LED flash and the camera has some post-processing capabilities that add extra pixels to the shot. For best results, we would suggest lowering the picture size to its native 8MP.

Budget smartphones and great cameras rarely go hand-in-hand and the Alcatel 1C is no exception.

Shots taken indoors look soft while darker conditions result in grainy photos. It also struggles in bright scenes, oversaturating light areas while failing to capture much detail in the darker bits. To be fair, the 1C produced better-looking shots than some of its more expensive rivals such as the $149 Nokia 1.

On the front, you have a 5MP front-facing camera with flash which does a good enough job for selfies.

The 1C can record up to 1080p video, but this suffers from the same shortcomings as the photos. Digital stabilisation is basic at best with the picture warping at every step so you’re best off standing still while shooting.

That said, you can get some decent results from the 1C’s camera provided you have a steady hand, the subject you’re shooting is stationary and the scene has good lighting. The included camera app also makes it easy to review and share your pictures on social media as soon as they are taken all while keeping the viewfinder open.

The 1C’s decent sized battery (2460mAh) combined with its low-resolution display and battery-friendly processor resulted in the handset easily lasting more than one day of fairly heavy use.

There’s no fast charging and, using the included charger, it took us 3.5 hours to go from 15 per cent to full charge. So an overnight charge would be a safe bet.

The 1C’s outer shell is made up almost entirely of plastic and there’s no Gorilla Glass on the front to keep scratches at bay, but that’s to be expected at this price point. Still, the 1C feels solid in the hand, akin to how BlackBerry phones used to feel back in their heyday, and it won’t break as easily as more expensive all-glass phones.

Overall, the Alcatel 1C offers surprisingly good value for money with impressive battery life, fingerprint scanner and an adequate display with a modern 18:9 aspect ratio. At $89, you’re going to have to make some pretty big compromises with the lack of 4G being the most notable. Also, keep in mind that the 1C is locked to Telstra.

Admittedly most of the shortcomings won’t be apparent to people upgrading from a more basic feature phone or other cheap handsets. There’s also the $129 Alcatel 1X due out next month which gives you everything the 1C has but trades in the fingerprint scanner for 4G and also runs Android Go which should provide better performance.

Go a little higher and there’s plenty of great choices just above the $200 mark, however, if your budget doesn’t stretch that far, you’d be hard pressed to find a more capable smartphone under $100.